Recently vivo he has left behind presenting its new proprietary interface, which will replace the current one FunTouch OS. This is a respectable novelty, which arrives with an inspired design (you breathe the air of iOS 14) but capable of introducing numerous useful functions, together with a streamlined and optimized UI, with a look that is still fresh and in a certain sense unprecedented for the Android landscape. After seeing all the features of Origin OS the time has come to find out what the smartphone vivo e iQOOs supported and compatible, thanks to roadmap of official issued by the Chinese company.

16 / 12 Update: the Chinese company has kicked off the release for the beta of Origin OS. Find all the details at the end of the article.

A few hours after the announcement of the Origin OS, the Asian house has entrusted the list of supported and compatible smartphones with the brand to the Chinese social network Weibo vivo and also iQOO (as anticipated in recent days), along with the official roadmap that reveals the release times. The update to the new UI will come aboard 33 devices and it will not be a prerogative of the top models. The distribution will take place in three different moments and obviously this is the version Open Beta: as soon as there will be news for the building, we will update this article or create a new one to integrate.

Obviously we remember that the roadmap released by vivo in these hours it refers to Chinese version of the software. As for the Global models, we have no news at the moment and the company has not yet announced Origin OS internationally. 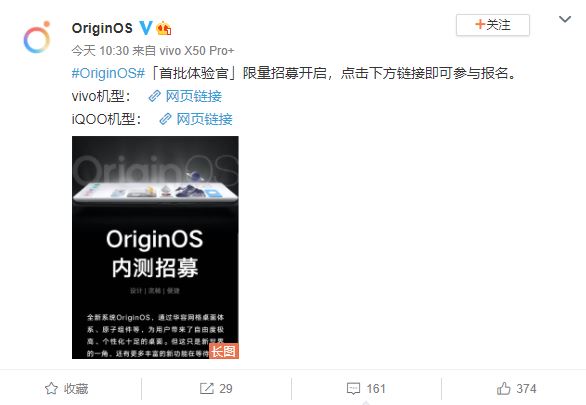 In recent weeks we have seen the list of smartphone vivo e iQOO who will receive the update to origin OS, complete with first details on the timing through the official roadmap. Well, as promised, the beta recruitment program begins, involving the very first models. Below you will find the list published through a post on Weibo, in which the Chinese company invites interested users to sign up for the beta program.

The recruiting phase will take place between 1st and 10th December, with 200 places for each device. The launch of the first Closed beta dedicated to the above models will start on 15th December. If all goes well, the building could peep out for the smartphones protagonists of this first wave as early as January 2021, but obviously it is all to see.

Following the announcement of subscriptions to the beta program of origin OS, here it is finally vivo kicked off the release of the first release of its new interface. The update appeared on the affected devices a few hours ago and many Weibo users shared images and details. As anticipated by the company itself, the interesting devices are vivo X50, S7 e NEX 3S, to which the models are also added iQOO e iQOO Neo3.

This is obviously an internal beta and apart from a few screenshot showing the interface or the download screen via OTA, not all the contents of the update have been revealed.

Google Bard is reality: here is the first rival of ChatGPT