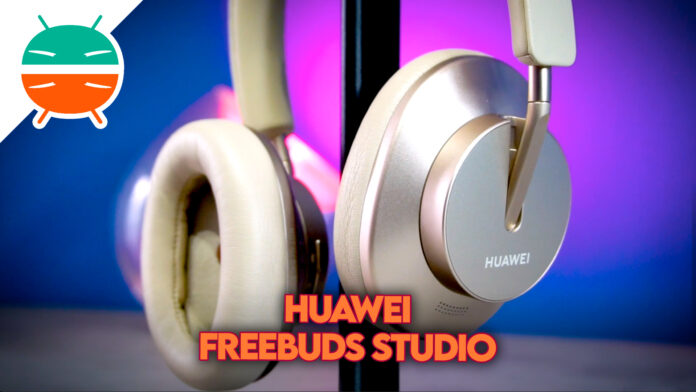 The question is simple. If with his FreeBuds Pro, Huawei has entered the world of wireless noise-canceling earphones with a straight leg, a world in which - let's face it - they have now managed to arrive more or less all, with the new ones FreeBuds Studio the Chinese company has tried to enter a much more complicated market, in which there are products of companies that in recent years have been able to demonstrate that they can produce over-ears that sound really good. Just think of the Sony WH-1000MX4, to Bose or to B&W and Bang & Olufsen, brands that have now taken their place in people's imagination as the best wireless wireless headphones, and which will be really hard to beat.

And without taking into account the new AirPods Max, which cost practically as much as two FreeBuds Studio, I tell you one thing: Huawei's first headphones they sound really good and amazed me a lot. They would be a perfect product, also pleasant in design, were it not for a couple of gigantic slips taken by the company, such as the inability to use them with the cable, a not exceptional battery and the use of a proprietary codec that - in my opinion - it was best avoided. 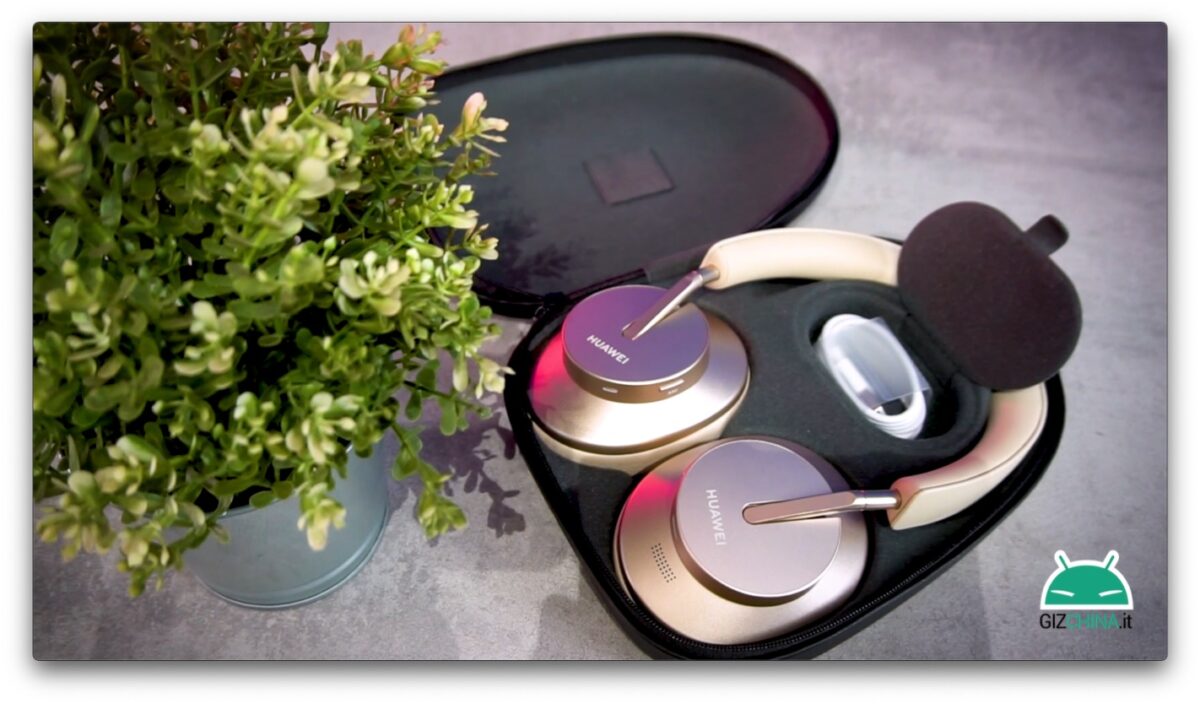 The packaging of the Huawei FreeBuds Studio it is in line with that of the other products in the sector. Inside, in addition to the wireless headphones, there is a USB-C charging cable and a very generously sized case, necessary for the lack of the possibility of folding the headband, able to carry the headphones safely.

Made almost entirely of aluminum, available in black or gold color (which we received in test) and with pavilions and headband in memory foam and covered in imitation leather, the FreeBuds Studio are definitely comfortable, more comfortable than some of the most famous models, and the merit is certainly also of not excessive weight. Comfort, however, is less during transport, or when not in use, because it has nothing to do with of that type of headphones that folds up on the headband: the two pavilions can rotate 90 degrees and flatten, but the footprint of the product always remains the same.

The pavilions measure internally 65 42 mm x mm, and have dimensions very similar to those of the Sony WH-1000XM4. And if the entire structure of the headphones is made of aluminum, we cannot say the same about the pavilions that they are made of plastic. However, even if worn for hours, the FreeBuds Studio they do not cause any discomfort: once worn, they remain where they are, whatever position you take. 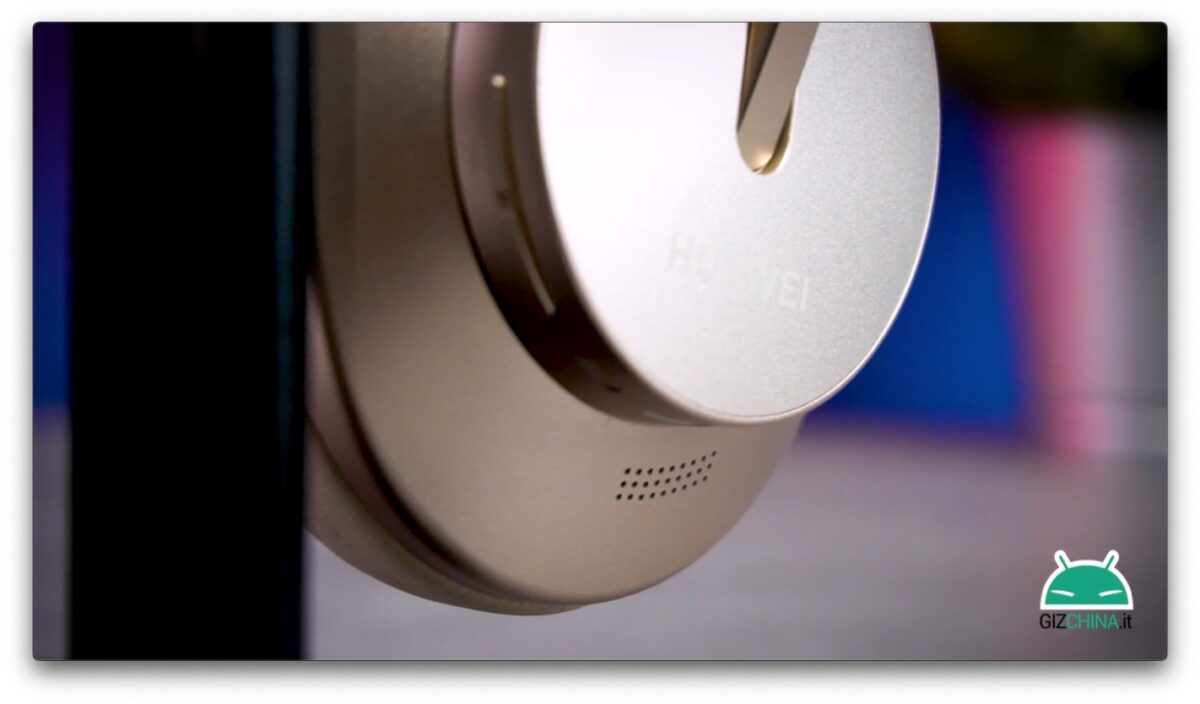 I physical buttons are three, one for switching on and the other for Bluetooth pairing on the right ear cup, and one for activating and deactivating the ANC. The management of the volume, of the reproduction, but also of the answer to the telephone calls happens through one touch surface positioned outside the right pavilion.

Ok, let's start from an assumption: the "Transparency" mode is actually a mode called so in Apple headphones. Okay, as usual this name has become standard, but in both the FreeBuds Pro and the FreeBuds Studio it actually has another name: Awareness mode. For those who are not yet aware of it, Awareness mode is a feature that, thanks to the 8 microphones integrated in the headphones, it allows you to listen to music or make phone calls together with all the noises that surround you, guaranteeing an exceptional effect, because it will be like not wearing headphones. 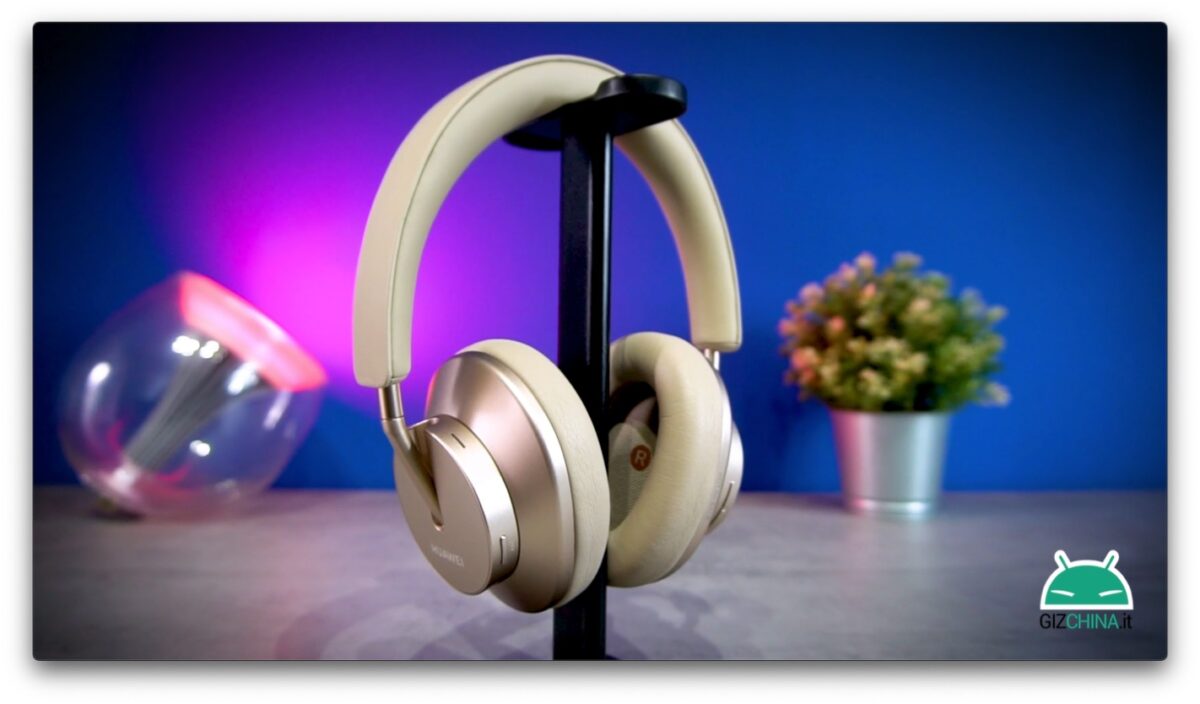 And although the reproduction of ambient noises continues to strain a little too much at the medium frequencies, the work done by Huawei with the FreeBuds Studio has led to a much better and more realistic result than what you have in the FreeBuds Pro. Ok, we are not yet at the level of Apple (the only brand that has managed to create an exceptionally natural effect), but we are certainly at a very high quality, superior to what you get with the Sony WH-1000XM4. Through the headset management app (which we will discuss shortly) it is possible to refine the functionality, for example by choosing listen only to the voices, and it's a pretty handy feature especially in situations where you have to watch out for announcements, like at airports or stations, but don't want to hear the rest. 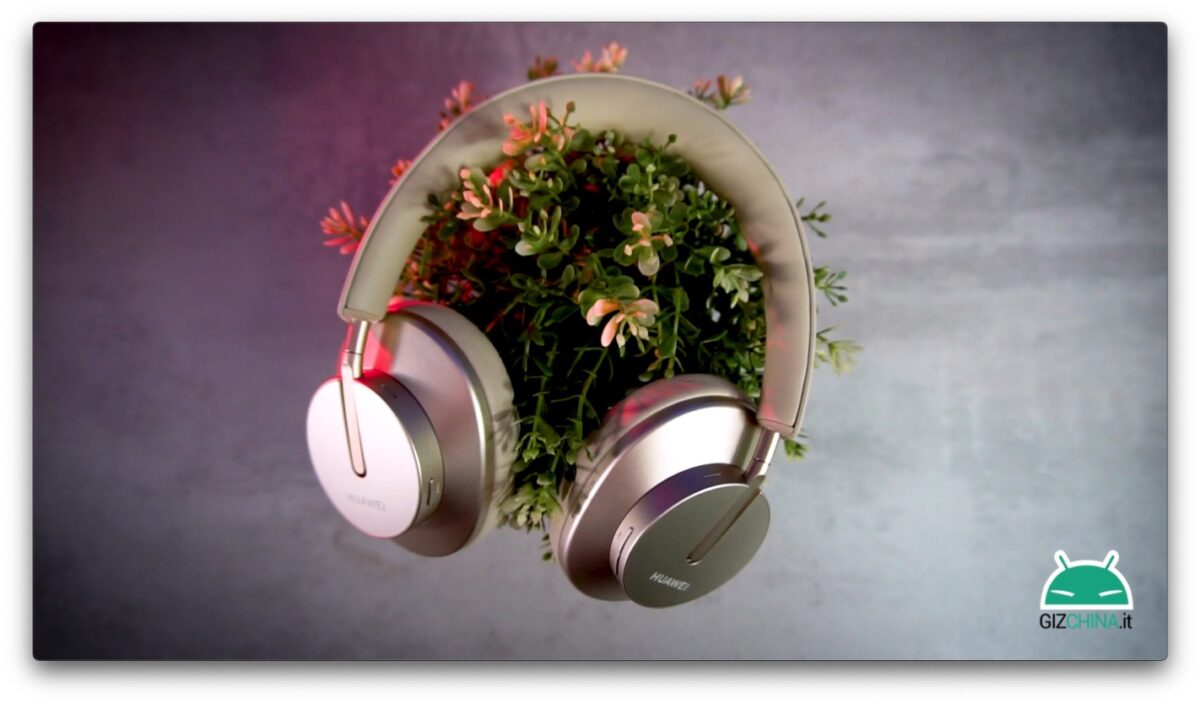 Excellentintelligent dynamic noise reduction, Huawei's active noise cancellation system which, again, guarantees sound insulation of the highest level: and here too, all thanks to the 8 integrated microphones that capture and analyze ambient noise for 200 times per second, choosing the best noise cancellation mode each time. Again, via the application AI Life it is possible to modify the ANC settings, and choose between three different modes (in addition to the "dynamic" one):

Animated by the same internal processor as the FreeBuds Pro, the FreeBuds Studio they connect via Bluetooth 5.2 + Bluetooth Audio, with double antenna and with an always powerful and stable signal, able to guarantee an optimal connection even at 15/20 meters away from the playback device. There is also the simultaneous connection to two devices, but the annoying thing is the lack of support for the HWA codec, superseded by the new codec Huawei L2HC dynamic high resolution, which, however, can only be exploited with Huawei's P40 series updated to EMUI 11. There are also two other codecs, the classic SBC e the AAC. And that's it, and it's a missed opportunity for the company. 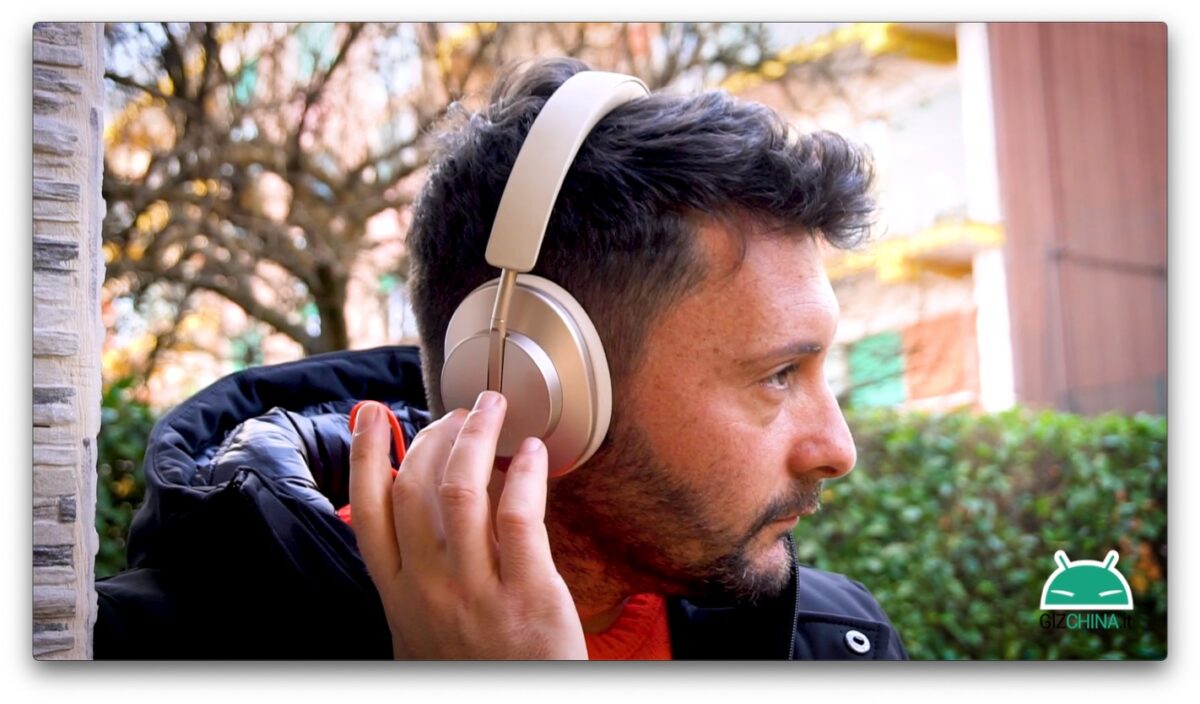 But those from Huawei also made another blunder: FreeBuds Studio cannot be used with the cable. And in my opinion it is a serious flaw, especially because those who spend 300 euros for a pair of headphones will probably want to use them at home too, connected with the cable to their high-fidelity system or, why not, connected to the Xbox or PlayStation pad and use them while playing.

In any case, using them only and exclusively via Bluetooth (and with all the limits of technology), to be able to understand the audio performance I carried out the one and only test that manages to give me an idea immediately: listening with songs very compressed. And it is precisely by listening to this kind of tracks, that we realize the absence of digital filters or systems designed to cancel audio defects in Huawei's headphones: with the FreeBuds Studio the qualitative limits of these audio tracks are immediately perceived, and it is a very good sign. 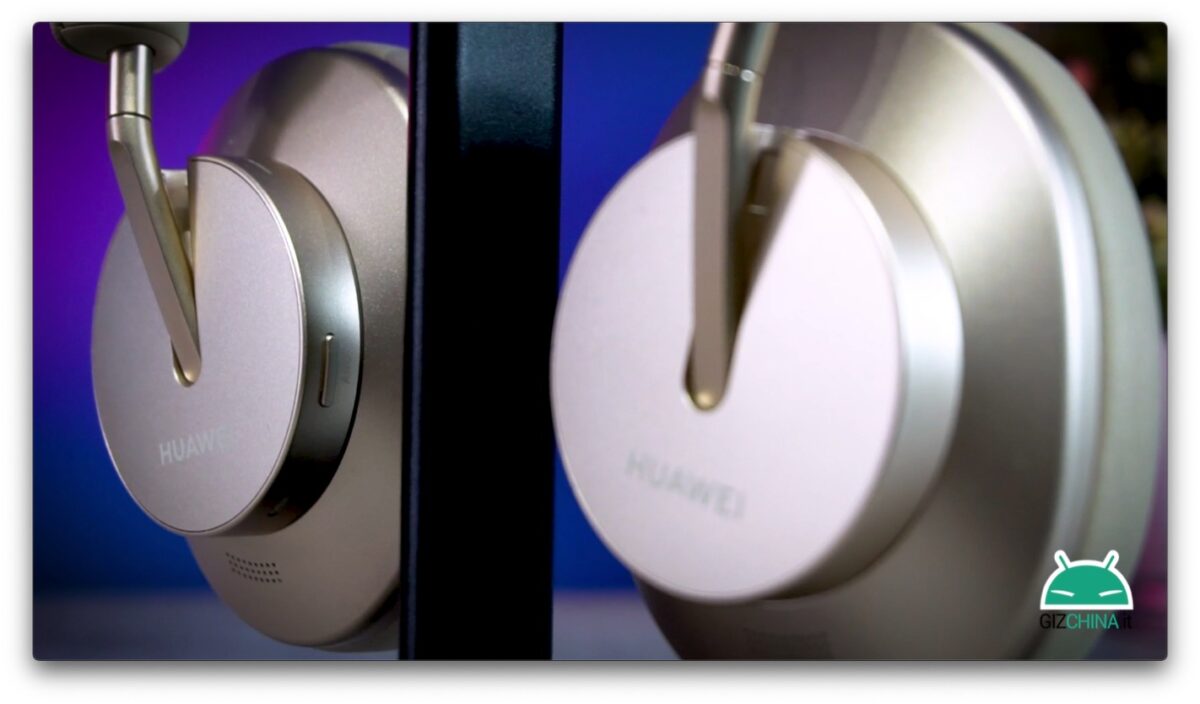 Listening to songs with superior quality then, one immediately emerges precise and three-dimensional sound rendering: the voices are very clear, even if there is a clear tendency to mid and high frequencies, which can be adjusted to your liking using any equalizer. There dynamic is engaging con any type of music track, and the noise cancellation never causes that annoying "vacuum" effect and even when the circuit is off, ie without ANC and Awareness mode, the isolation of the bearings is quite effective.

Very good on the other hand with regard to telephone calls: the interlocutor will always hear you loud and clear and the connection with the smartphone is always stable. But be careful to activate Awareness mode, so you don't end up screaming because you can't hear your voice outside.

Battery life is another of those factors you convinced me poco in the FreeBuds Studio. Of course, it is a value that can vary based on many factors, such as playback volume, use of ANC or Awareness mode, and so on. 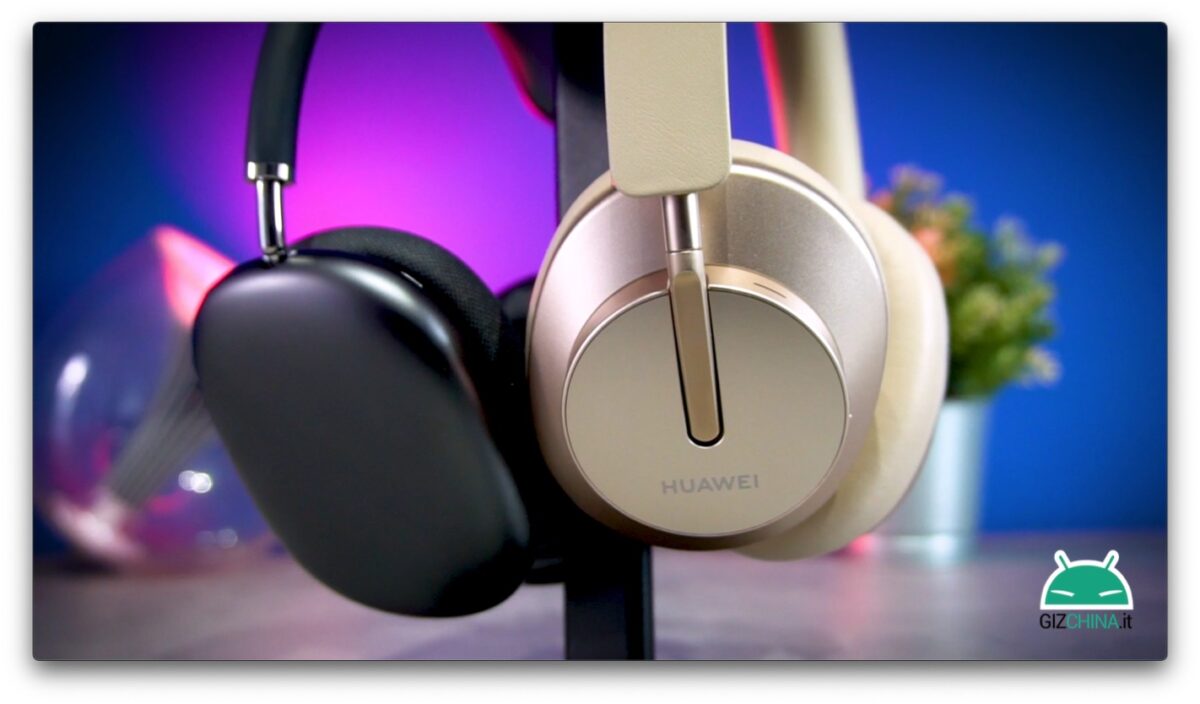 And, without getting around it, with noise cancellation on and the volume set to medium levels, the first time I tried them I got to about 8 hours of continuous use. Things then changed a bit after a few charging cycles, to the point of reaching about 18 hours without ANC and 10 hours with noise reduction.

And it is a far cry from what Sony or Bose guarantee. The battery from 410 mAh fully recharges poco more than an hour, but it will suffice 10 minutes to have sufficient autonomy for about 5 hours of use without ANC.

The price of the FreeBuds Studio is 299 euros, but through the official Huawei store it is possible to take them home with an excellent promotion active until 31 December 2020: with 50 euro discount, therefore at 249 euros, or with the Huawei Watch Fit for 299 euros. And, whatever your choice, it is a more than appropriate figure when compared to the quality of the product (and the prices of direct competitors). 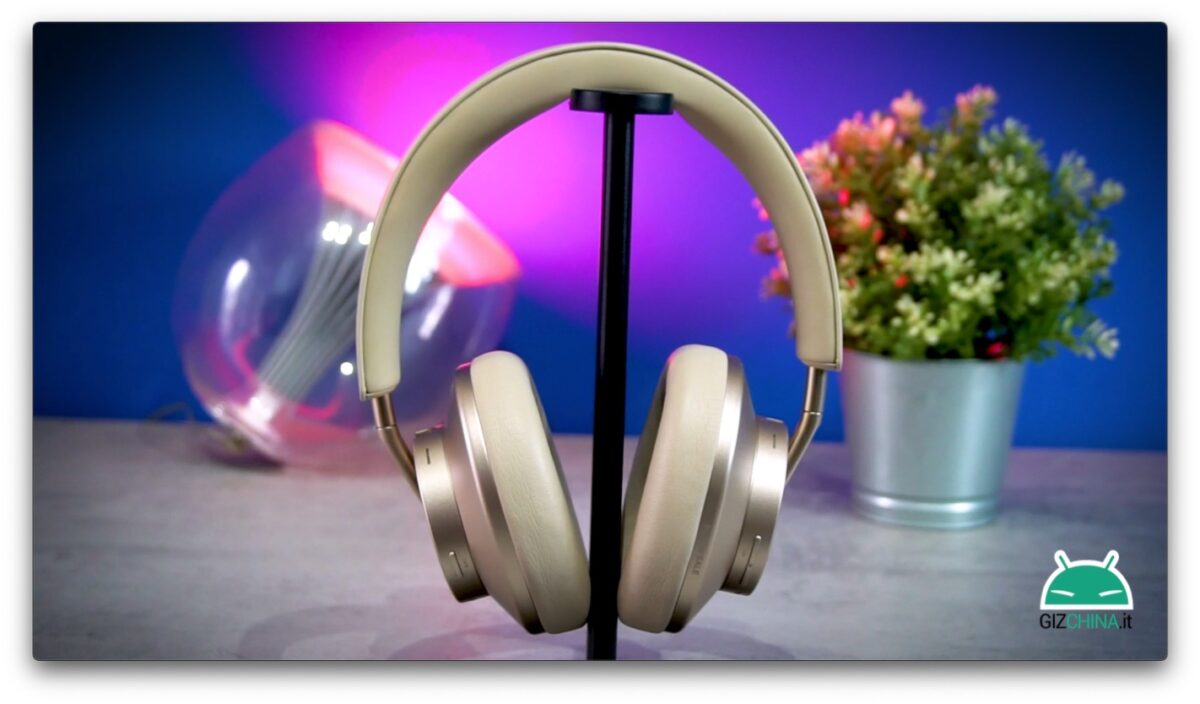 And let's face it, the FreeBuds Studio they are among the best wireless headphones for listening to music, but they are part of a range whose protagonists are called Sony, Bose, B&W and Bang & Olufsen that are unlikely to be able to beat them in terms of sales. However, it must be said that the selling price is much lower, but Huawei lacks some refinements that the competition does not do without, such as the possibility of using them with the cable, compatibility with high resolution codecs or a more optimized autonomy.

In short, paradoxically Huawei has slipped on what were the easiest features to manage, and they surprised me for this: I was expecting a lot of versatility and a not excellent audio quality, and instead the precision of the reproduced sound. it is more than up to par of competitors.

Buy the FreeBuds Studio in promotion: with 50 euro discount, therefore at 249 euros, or with the Huawei Watch Fit for 299 euros.