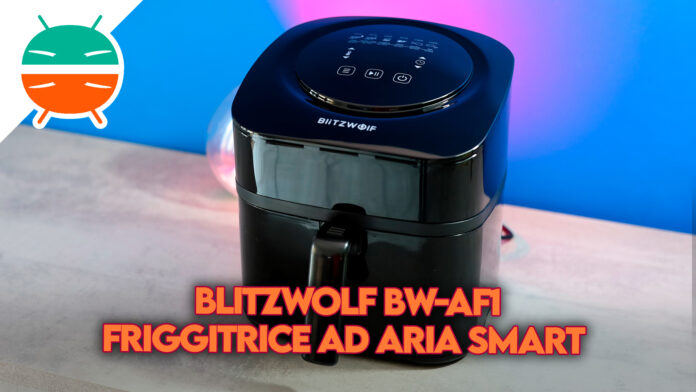 I never thought I'd find myself appreciating an air fryer. Nor would I have ever thought I would be happy to use a smart fryer. And then came the BlitzWolf BW-AF1, a product born from one of the Chinese companies that comes closest to Xiaomi's philosophy and that, for some time now, has been producing and selling smart devices for the home, all enclosed in a star ecosystem, whose center continues to be, as always , the smartphone.

Of course, practically everything in my house is now controlled with a smartphone or voice. The lights, the sockets, the television, even the Xbox Series X, the intercom and the front door. Everything is now manageable through an application for mobile devices. Yet the fact of being able to manage the cooking of food with the mobile phone amazed me. Because it is one of those things that you are convinced you can do without, but which then - using them daily - turns out to be very comfortable. I have a rather small kitchen full of junk, and the ability to control the smart air fryer BlitzWolf BW-AF1 with the smartphone, it has me - for example - given the possibility of placing it on a rather high shelf, from which I do not have access to the product buttons.

BlitzWolf BW-AF1 review, a smart air fryer that could revolutionize your kitchen

Air fryer: how it works

Before going into specifics and talking about my experience with the BlitzWolf BW-AF1, I would like to take a pebble off my shoe. The trend of calling these particular products an "air fryer" is more a matter of marketing than technical. How an air fryer works, you may be wondering. In reality, the concept that hides in an air fryer is a far cry from the process of cooking food in fat or oil (that is, from the "real" frying), but it is much closer to the concept of convection oven. 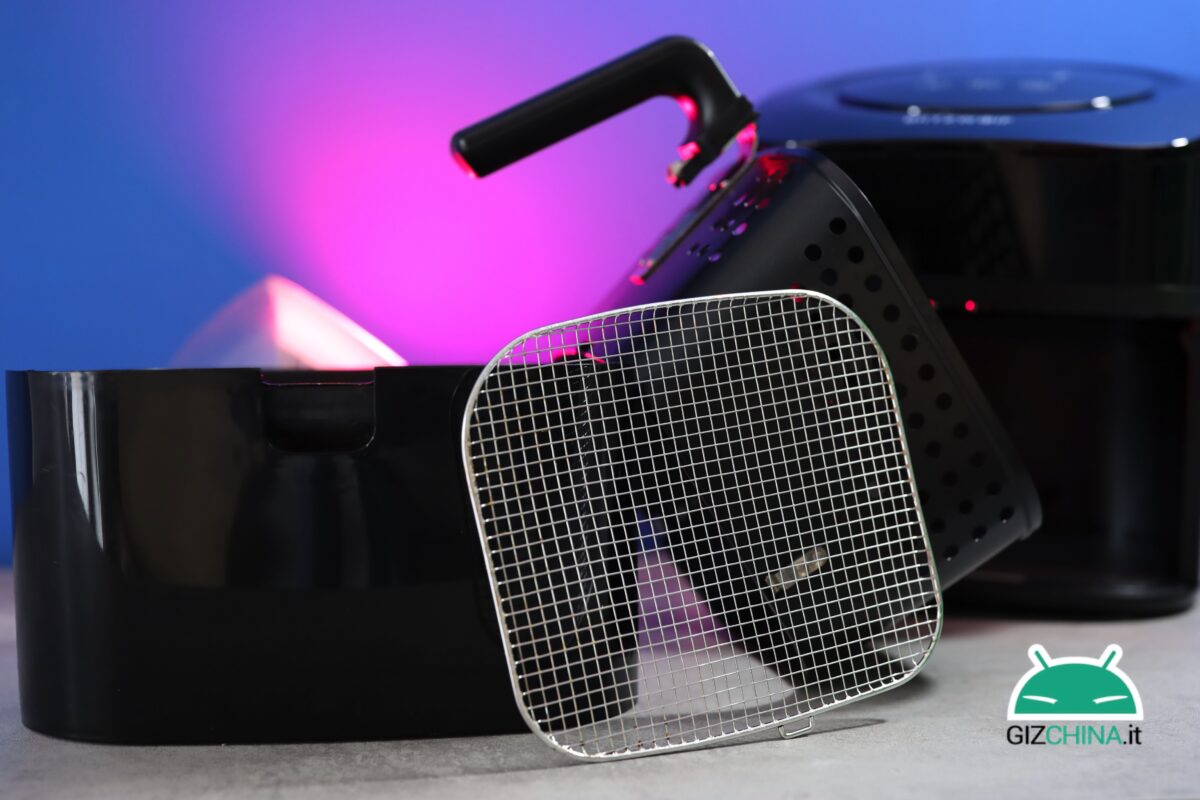 And let me explain: thermal convection is a very simple physical phenomenon that is observed when hot air comes into contact with a body that has a lower temperature. The hot air, due to natural convection, rises upwards while the cold one goes downwards, and this is precisely how convective motions are generated. Well, what is a convection oven? An oven that cooks food in a ventilated manner, generating controlled convective motions in order to obtain a better cooking.

And this is exactly what the so-called air fryers do: in reality they do not fry anything, even if it is possible to insert very small doses of oil, but they are equipped with one or more resistances and a ventilation system capable of manage convective motions of the internal system.

Having said that, however, I will continue to call these products "air fryers“, Because it's a more pleasant name (and at least it helps me to delude myself into eating fried, without using oil).

The structure of the Blitzwolf smart air fryer it's very simple. The product consists of the main structure, and a baking tray, which in turn is structured in three pieces and which has a maximum volume of 6 liters. It is therefore a large air fryer, with which you can cook a good amount of food.

Above is the control panel, in which we find a LCD display through which you will be able to access the cooking settings and a timer that will start once the process has started, on the sides of which there are touch keys to select time and temperature. Below the display there are three other keys, with which you can choose the cooking modes (choosing from the 5 pre-set ones), start or stop cooking and switch on the device itself. 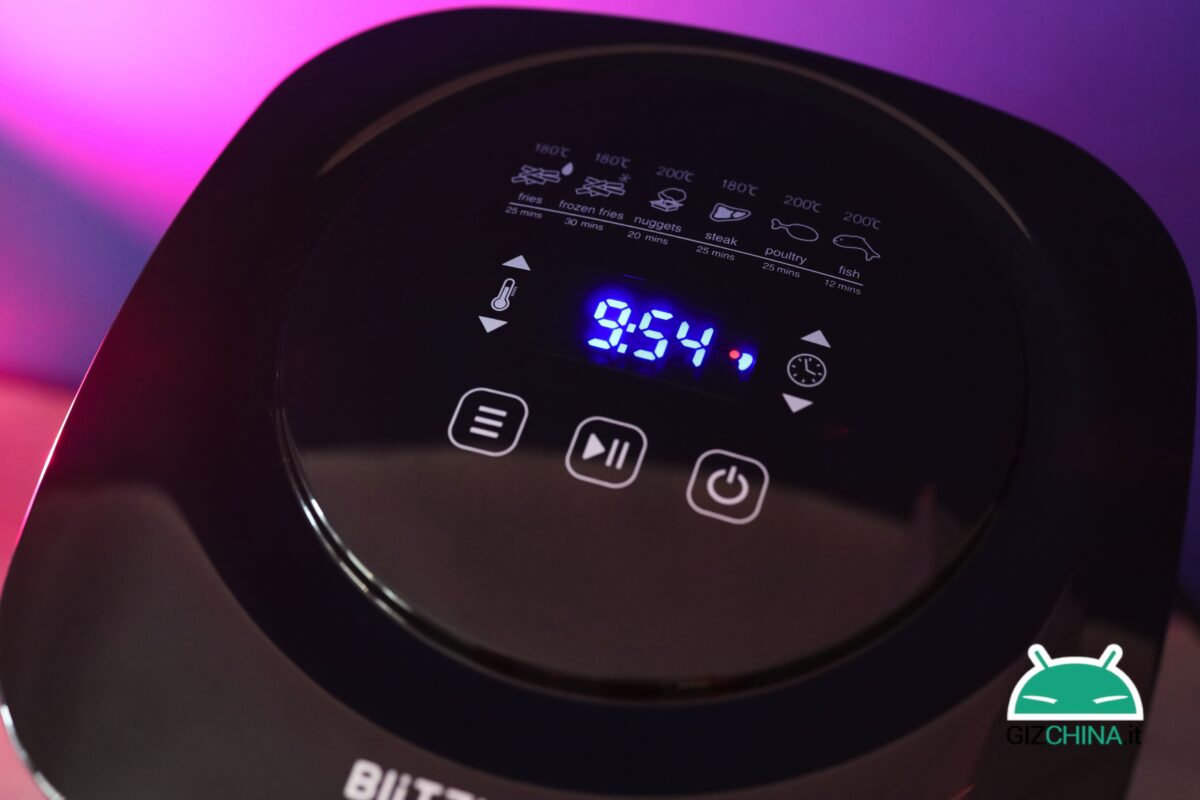 Above the display, on the other hand, there is a line in which the icons relating to the pre-set cooking, which, however, is not touch or usable: it is a simple reminder, completely useless in my opinion. The whole fryer is made protected by a layer of very shiny polycarbonate, which is very afraid of fingerprints and grease: given the nature of the product, I would have preferred a matte finish, to avoid having to continually remove various fingerprints from the entire surface. 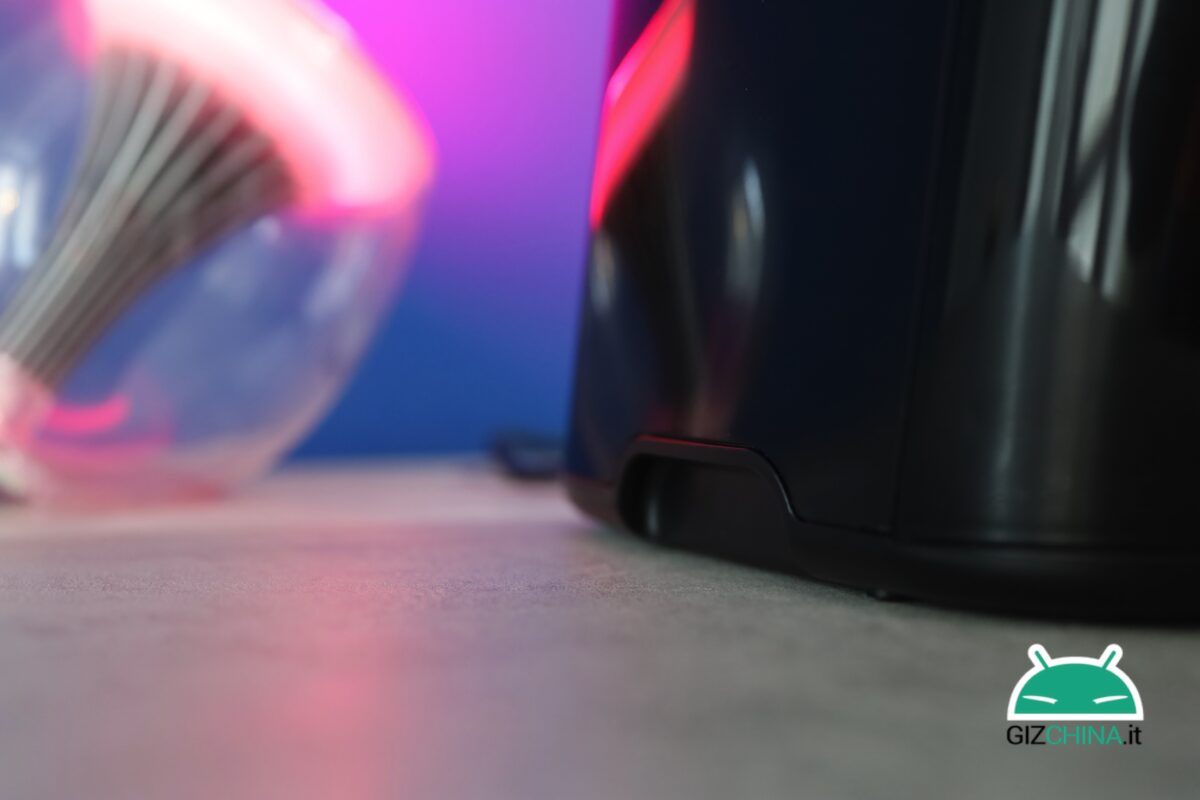 Finally, in the lower area of ​​the air fryer, there are two small handles which will greatly simplify the transport and movement of the device.

La Blitzwolf air fryer it's a smart model. Which means that basically (and like all IoT devices) connects to WiFi at home and can be controlled via a free app (called Blitzwolf) available for both iPhone and Android. Both the setup process and operation are extremely simple and intuitive, and work well on both iOS and Android.

Once you have paired with your home wireless network, you can use the application to set cooking times and temperature, but also to switch the device on and off. And if there is one thing that amazed me about Blitzwolf's smart air fryer, it is the response time to commands sent via the smartphone: lag is practically absent, and each command is immediately processed by the device. 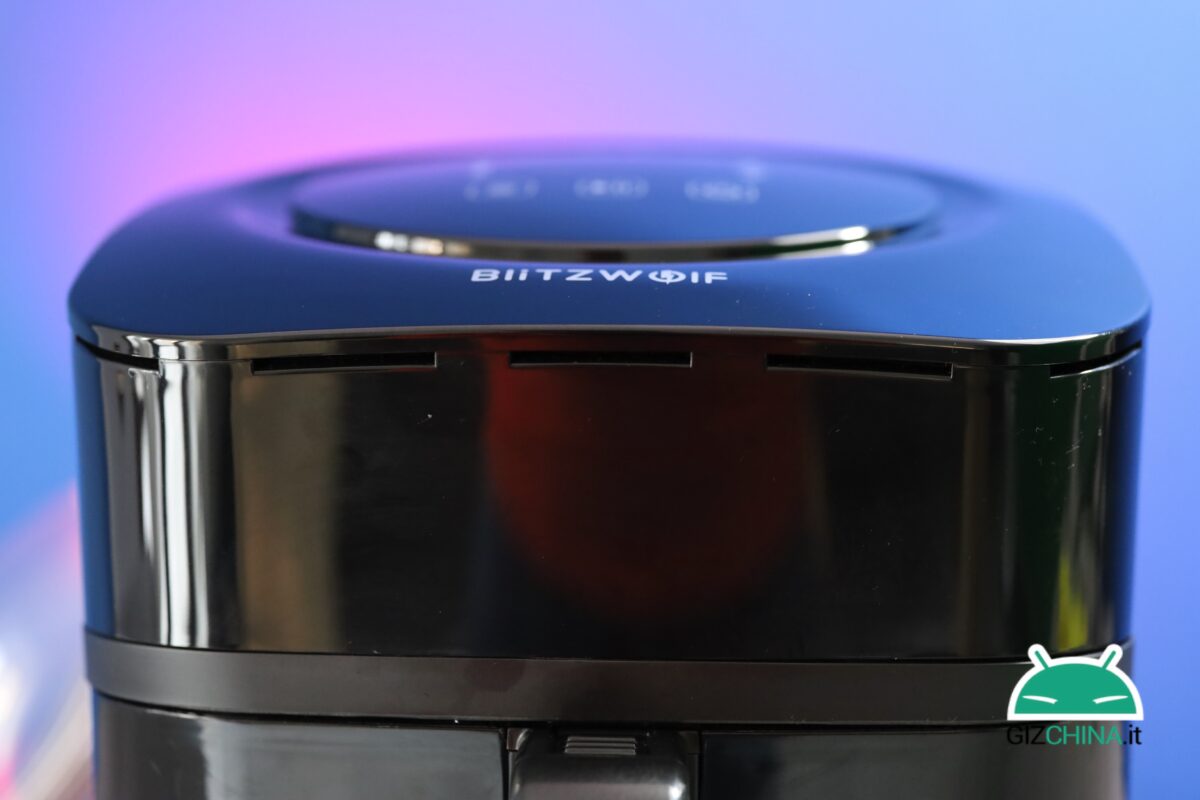 Through the application you can also choose between 6 pre-set cooking modes, although my advice is not to rely too much on these settings, especially as regards cooking times: it is important, from time to time, to pause the fryer and check cooking removing the basket, paying close attention to its temperature (it is very hot), and checking the food inside. 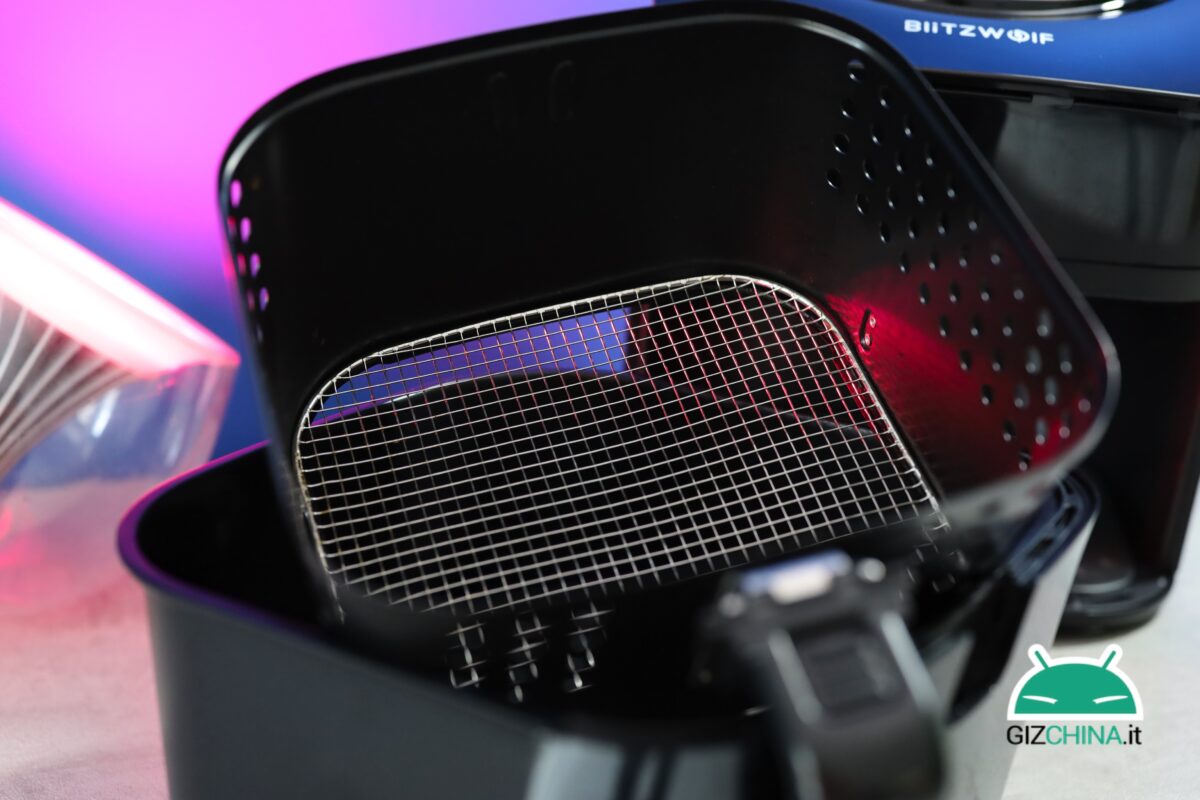 Instead I stayed very disappointed from the integration with Google Assistant. Even if the company advertises the BlitzWolf BW-AF1 as a device that can also be controlled by the voice, the reality of things is very different. And it is basically because yes, indeed it's true that you can add the air fryer in the Google Home app, but the device will only be added as a component of the home ecosystem, and it will not be possible to control or control the cooking times. In short, a real failure.

I am using this smart air fryer for over a month now, and I've really cooked everything with it. And, as tradition has it, the first foods I cooked were fantastic frozen french fries: it was enough to fill the basket, set the time and cooking, and wait until they were ready. Nothing is easier.

Either way, from my experience I understand that not always with the air fryer you can cook without oil. In the case of frozen fries (and all pre-cooked foods) the use of oil can be avoided, but if you want to cook something not pre-fried, you should add a teaspoon of oil, to make everything more crunchy and delicious.

But french fries aren't the only thing you can cook in such an appliance. In the last month I have cooked some cutlets, Cordon Bleu, breaded vegetables, chicken nuggets and even meatballs, bacon (which is even better with the air fryer) or an omelette. In short, really (almost) everything. 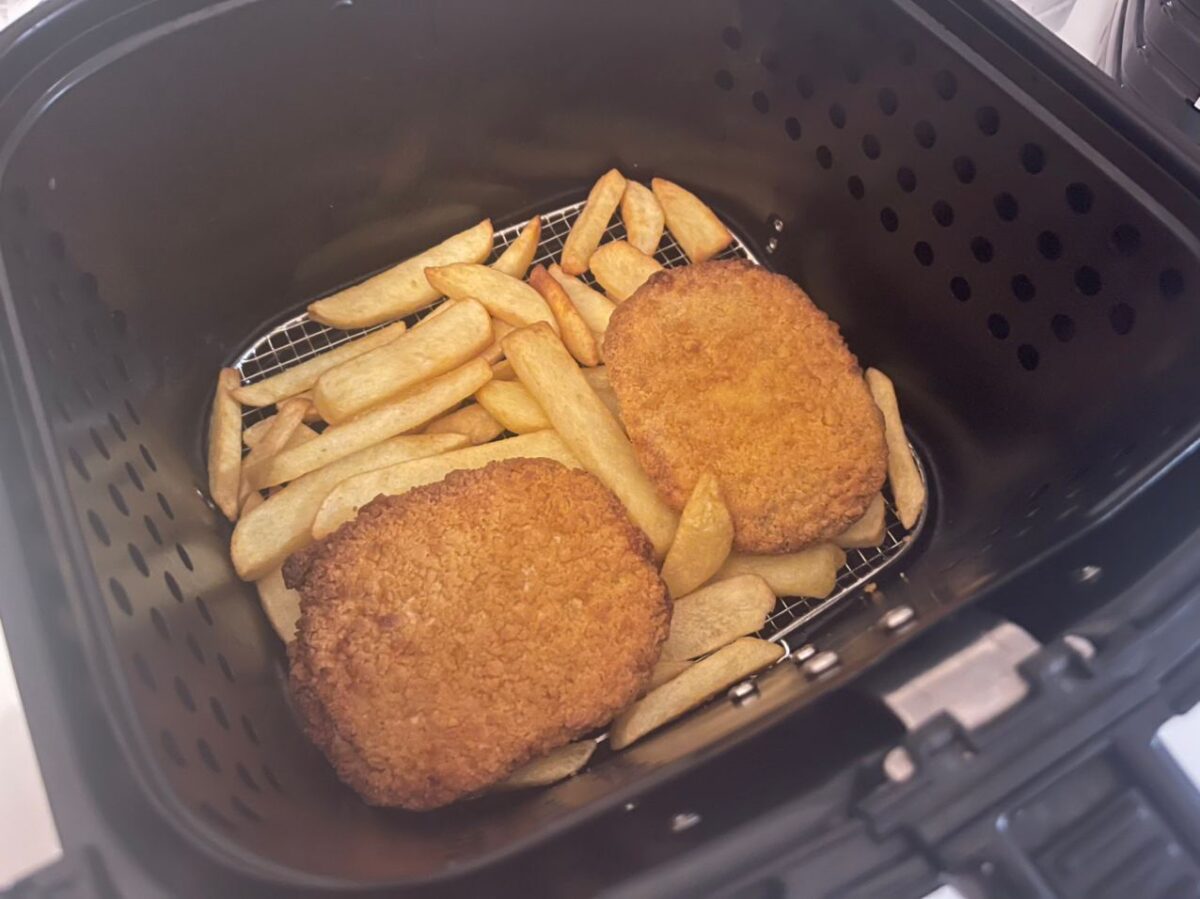 The only advice I can give you is relative to very fatty foods, such as bacon. During cooking, this type of food tends to lose part of the fat, which ends up dripping onto the lower part of the basket and, consequently, generates smoke: well, to prevent this from happening it is useful add a little water to the basket, so that the grease does not come into contact with the hot surface and does not burn. 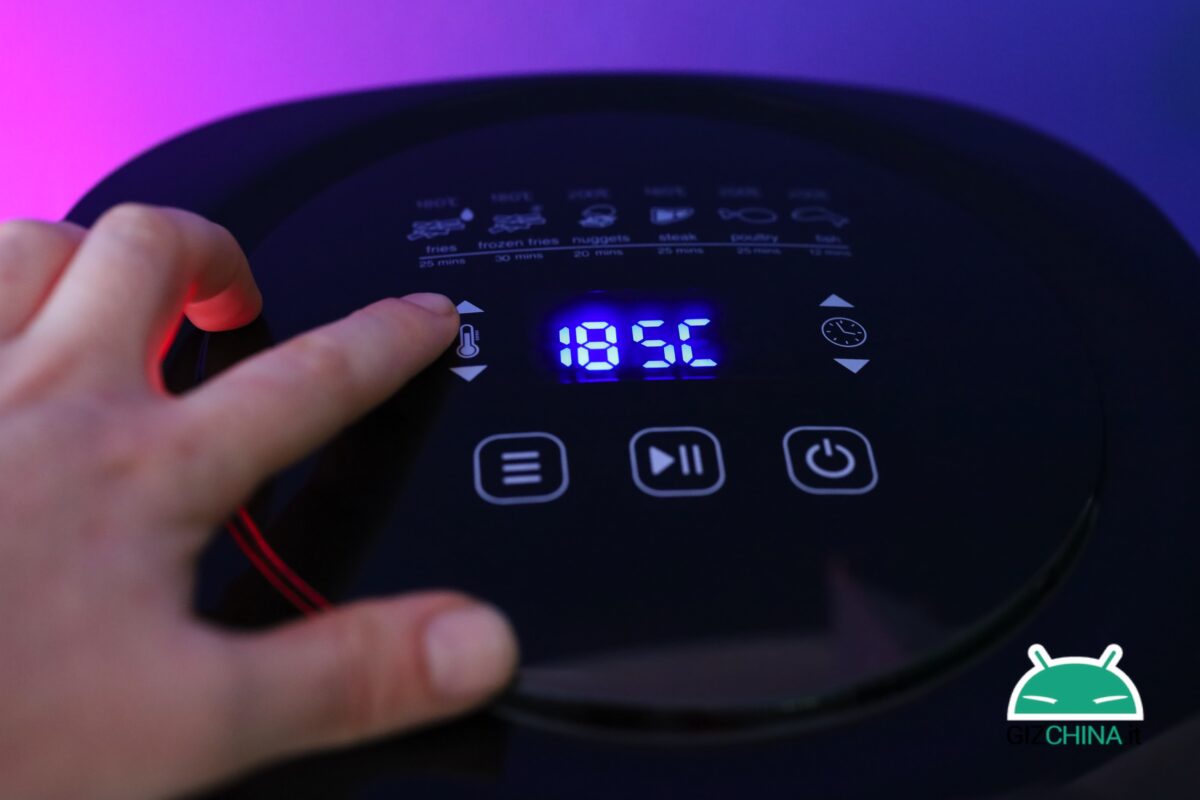 During cooking, the BlitzWolf BW-AF1 smart air fryer is very quiet, almost not heard. Both on the display and via the application you will have access to a countdown with which you will keep an eye on the cooking time, at the end of which the fryer will emit an audible beep and the application will send a notification to the smartphone.

But it is at the end of cooking that one realizes the convenience of such a product, and it is a very practical convenience that is independent of the delicacies that can be cooked with it: the cleaning. The need for washing is practically minimal and all the components of the basket can be disassembled and washed in the dishwasher without any problem.

La smart air fryer BlitzWolf BW-AF1 is available on offer with discount code a €75, complete with shipping from Europe. And yes, it is a higher figure than that of a traditional fryer, but trust me: you can live very well even without a microwave oven, but once you understand its usefulness and comfort, it will hardly be done. less. 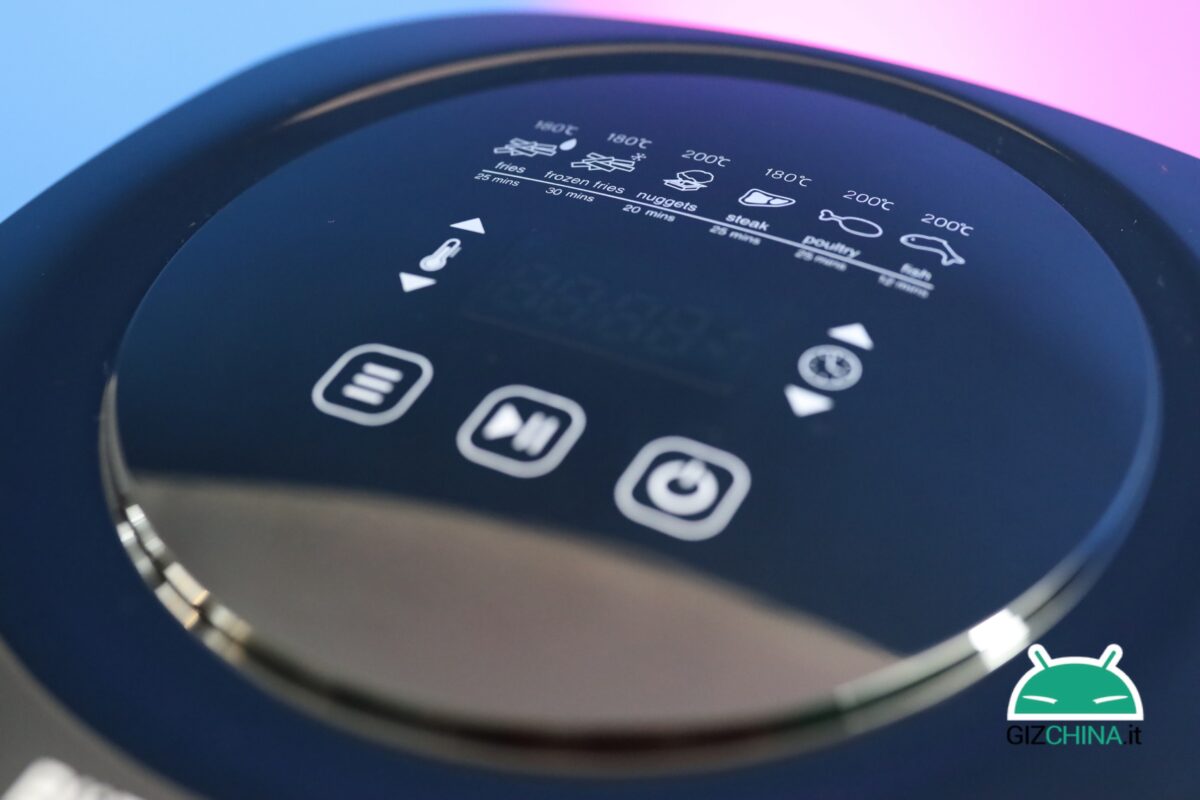 Well, the concept of BlitzWolf BW-AF1 it is the same, but it is enriched by its smart features, very comfortable in my opinion. Of course, it is not one of those appliances with which you can cook just about everything (very moist foods, for example, are to be avoided), but with everything frozen, with meat and fish and - in general - with anything that can be baked or fried, there is absolutely no problem.

Realme 9 Pro and 9 Pro + in Europe inaugurate the strategy ...