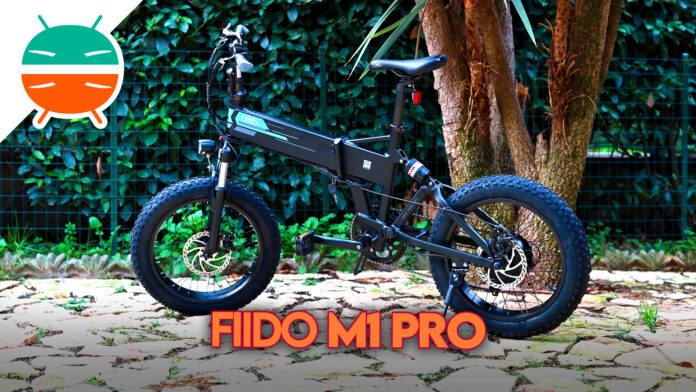 Those who have appreciated the Fiido M1 will certainly have done so for the design, for its fat bike tires, for the presence of a double shock absorber and two disc brakes, and for the power that - for the sale price at which it is sold - not bad, but apparently not enough. And to think that such an electric bicycle deserved a more performing engine and battery it was certainly not us, that in fact in the our review we praised its power as well, but Fiido herself. Because a few months after the marketing of its first electric fat bike, the Chinese company has decided to update one of its most popular models, not revolutionizing it in design but adding, in fact, a more powerful motor and battery. 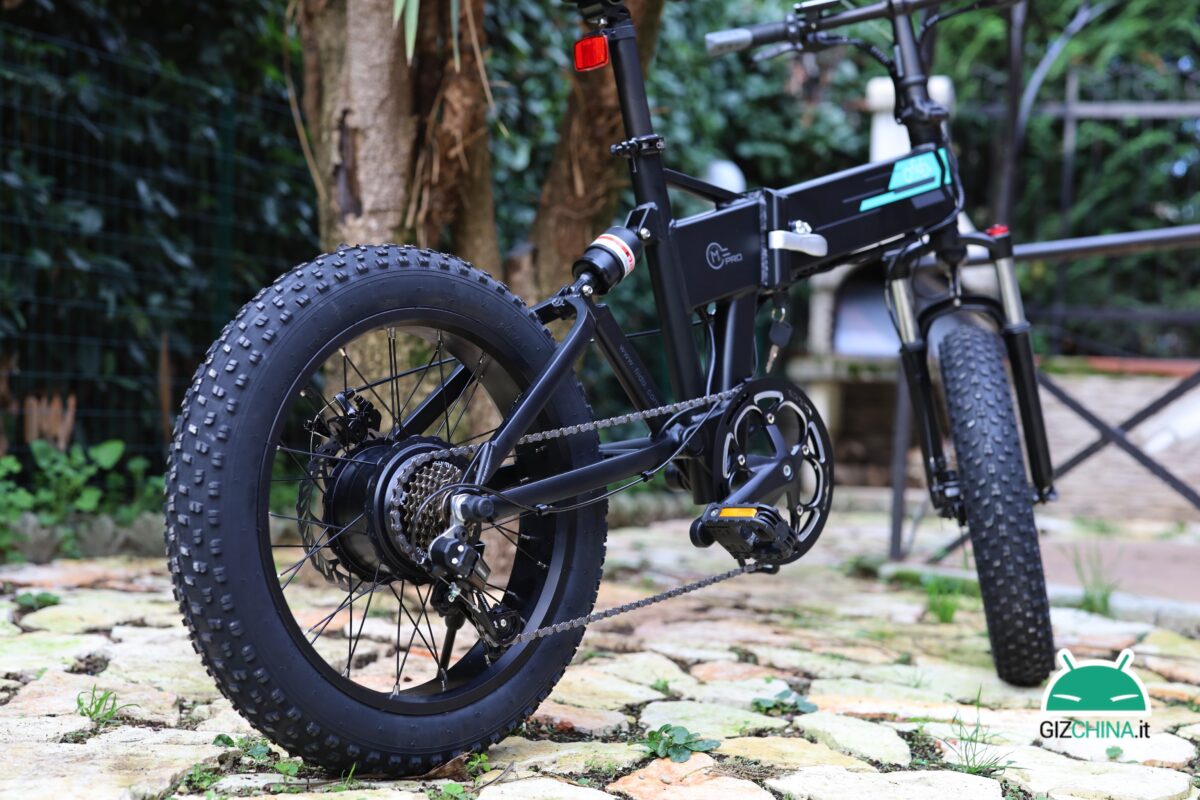 And the result is simple: thanks to a 500w motor, flanked by one 48v battery, Fiido M1 Pro, this is the name of the new version of the Chinese electric bike, is now able to achieve well 40 Km / h speed peak and autonomy that (on paper) could reach up to 130 Km in pedal assist mode.

In short, performances of the highest level, which however violate any Italian law. But, by now, we are used to it: all electric bikes are equipped with an accelerator, including the old Fiido M1, and as if that were not enough, the Pro version double the engine power limit imposed by current Italian regulations.

As we saw with the previous model in the series, the packaging of the Fiido M1 Pro is to say the least poco huge. And this is because, essentially, the bicycle is delivered already assembled. Before getting on the saddle, however, it will be necessary to install only some components, such as the front wheel and the handlebar: operations that are not complicated at all, which everyone will be able to do.

Here is the complete data sheet and the technical features of the new Fiido M1 Pro:

From the point of view of design and construction materials, there is no difference with the version of a few months ago. Outwardly, the Fiido M1 Pro it is identical to the Fiido M1, and continues to keep its usual weight of 25 kg net and 29.5 kg gross which will make it rather complex to place it in the trunk of your car, and when closed it is always 960x790x450mm large, in short, less than a square meter. But despite the fact that the handlebars and pedals can also fold up, it is good to always keep in mind the fact that carrying it around when closed it will not be a walk in the park. Let alone load it, for example, into a train or bus. 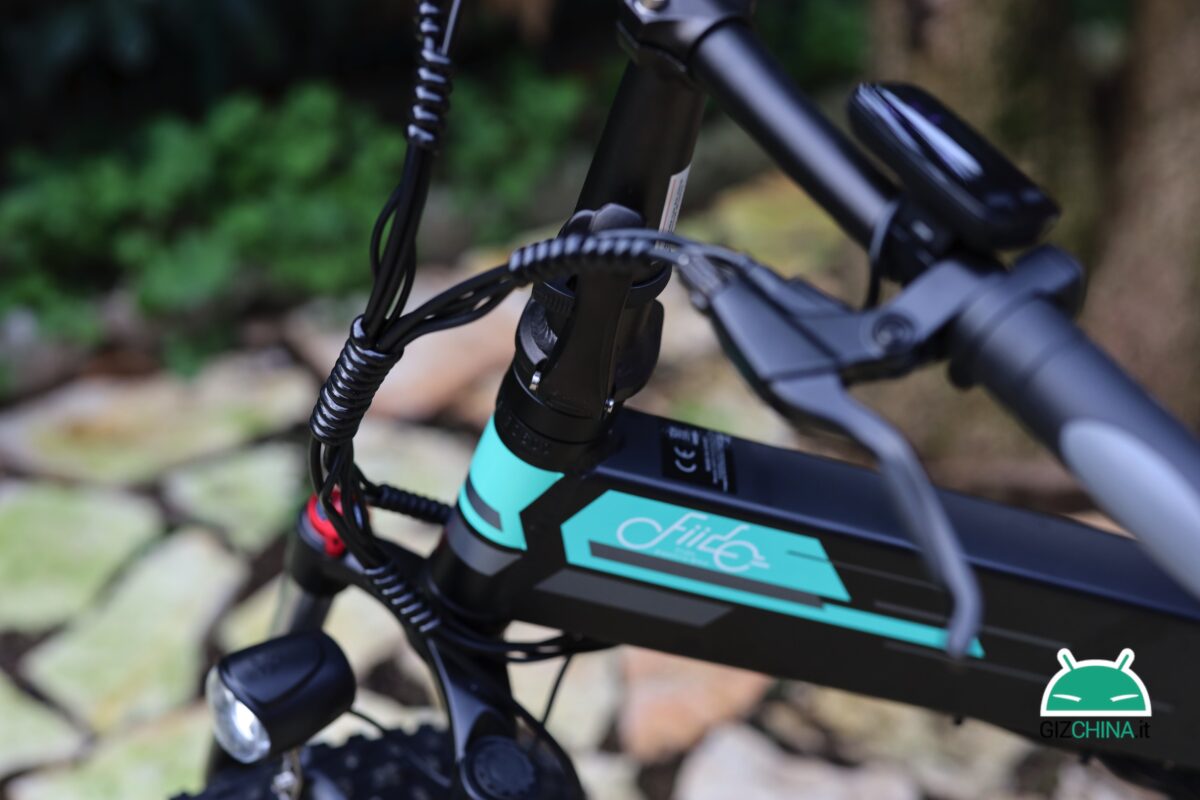 In any case, by folding the bike and opening the central pillar, you can access the battery, which is removable and is activated with a key located at the bottom: all the electronics will not turn on until the key is turned which will start the battery power.

The real differences between the Fiido M1 and the Fiido M1 Pro are under the body. The motor is always of the brushless type, but the power goes from 250w of the "traditional" M1 to 500w of the new M1 Pro, and the usual continues to be present Shimano exchange to 7 reports, assisted by one 52 tooth crown. Shifting is always precise, fast and very intuitive, and is controlled with a click switch that is positioned on the right side of the handlebar. 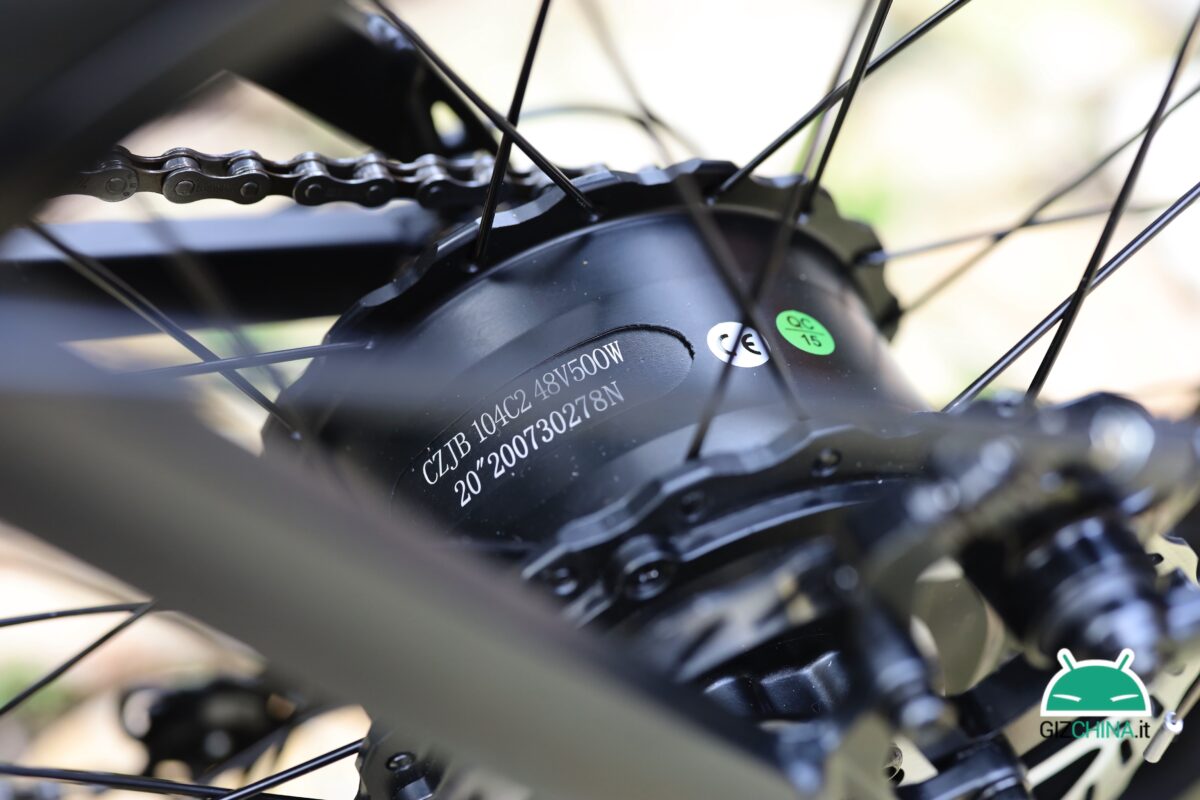 Next to the gearbox there is also an accelerator, which will allow you to move in "full-electric" mode, but that in Italy it is not allowed to use on electric bikes: the operating concept is identical to that of an electric scooter, just push the lever and reach the maximum speed of 25 km / h. Speed ​​which, in reality, is limited to 25 Km / h due to the regulations of the European Union, but which in reality could reach 40 Km / h (and yes, it is possible to “unlock” this limitation with a very simple trick). 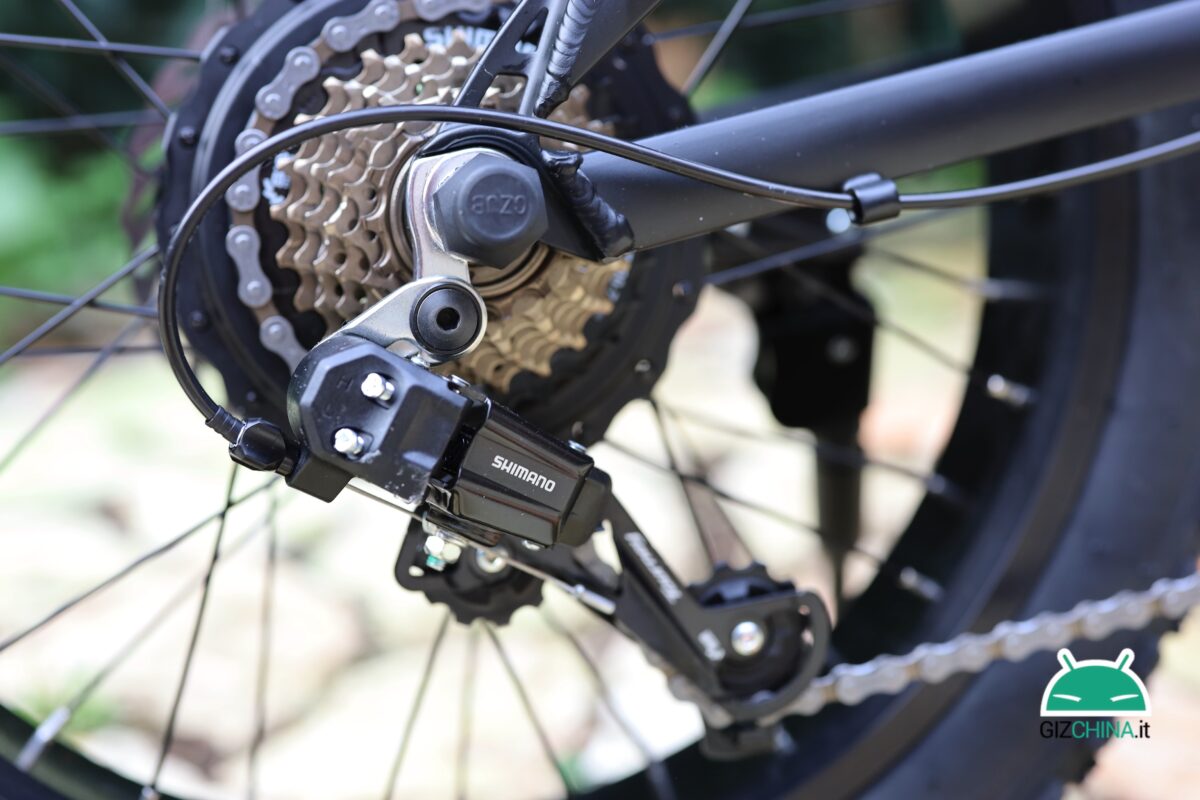 On the left there is the typical on-board computer of Fiido, which integrates an LED display that is on average visible even in direct light conditions, but very basic that will allow you to check the current speed, the kilometers traveled in the current session and the pedal assist modes: they are three, and respectively lead to maximum speed of about 16, 20 and 25 Km / h. 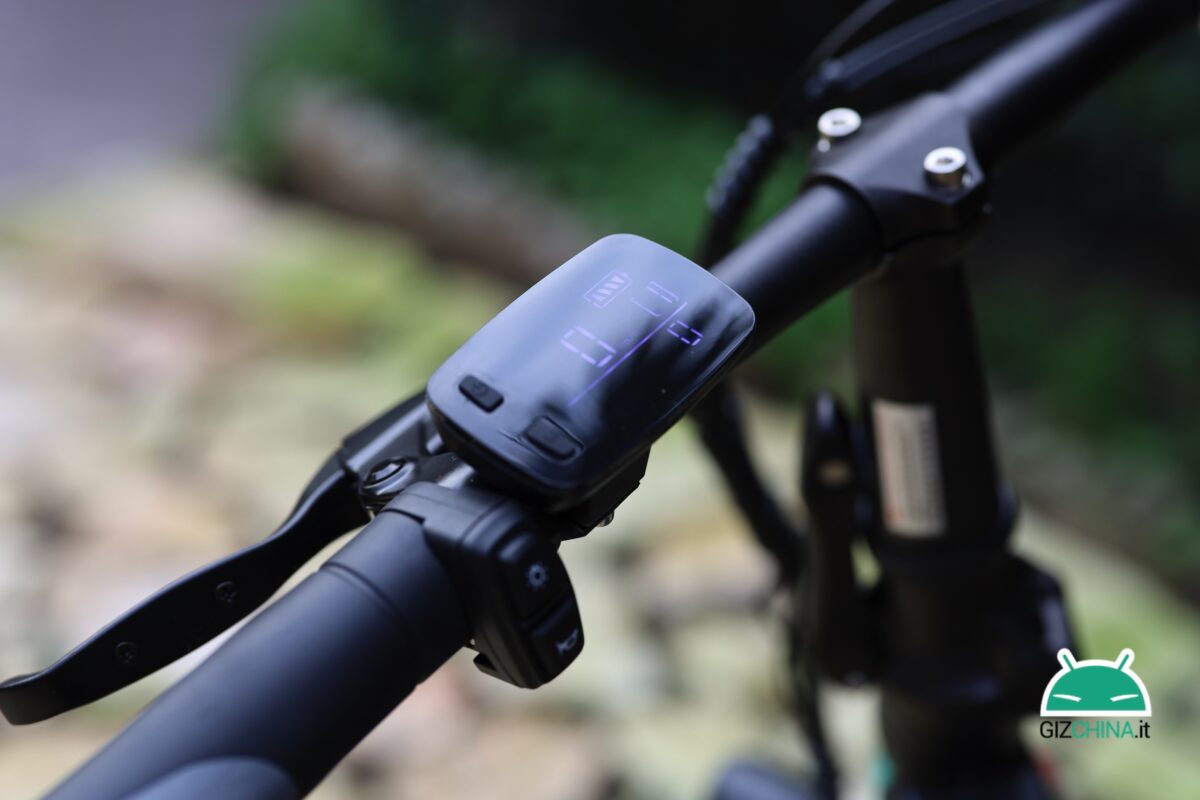 Despite the Fiido M1 Pro have an all new and more powerful engine and battery, keep going missing torque sensor and pedal assistance continues to be initiated exclusively by the pedal sensor. This could make some departures quite difficult, especially those uphill, in which to take advantage of the pedal assistance you should pedal for about 1/4 turn before you start feeling the electric motor push. And, in short, it is in these conditions that the accelerator actually begins to become rather comfortable.

The battery of the Fiido M1 Pro is another of the novelties that we find in the new version of the electric fat bike. It goes from 36v and 15.5Ah to 48v and 12.8Ah, which means not only more power, but also greater autonomy. According to the company, in fact, it should allow you to travel about 130 km with minimal pedaling assistance and about 500 charge cycles. And I must admit one thing: I did not have the opportunity to travel all 130 km with minimal assistance, for a matter of free time and "weather", but I arrived at 93 Km with one battery cleat still available, which lets me assume that the autonomy could really be close to the 130 km declared by the company. 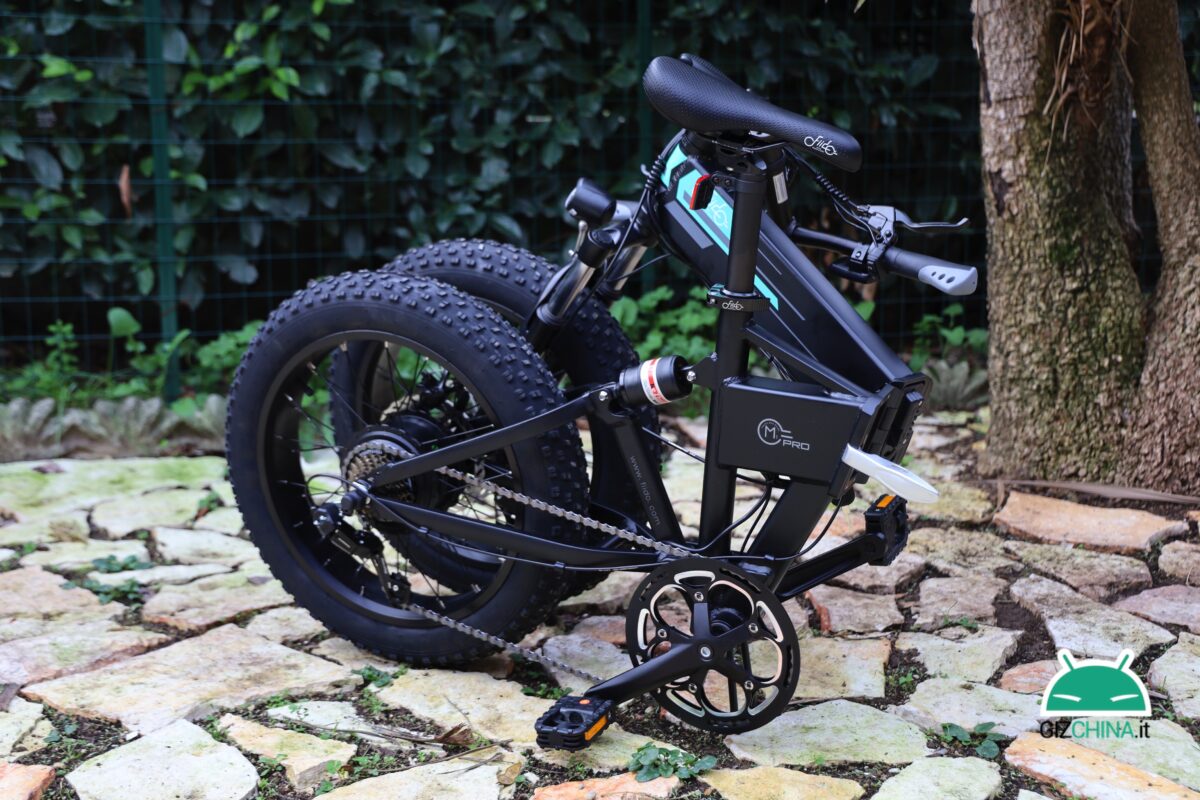 But I took her to exhaustion in full-electric mode, arriving at about 49 Km of travel with a single charge: which is an exceptional result, in my opinion, especially considering the weight of the bike, my weight (which is certainly not a featherweight) and the fact that in Avellino there are many ups and downs.

The recharge takes about 9 hours (for a complete charging cycle) thanks to an external power supply, with a cable that is far too short for my taste, which connects to a port positioned laterally near the battery compartment and which is covered by a small rubber cap. 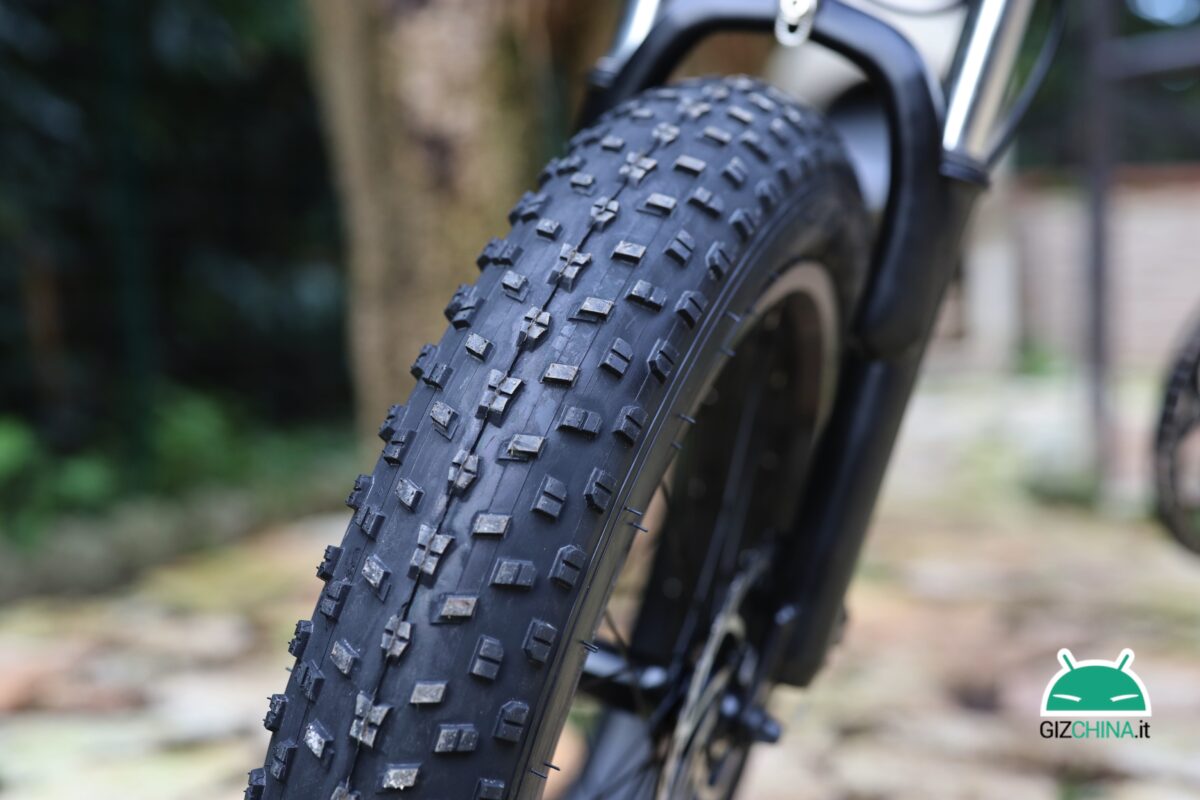 Unfortunately, however, the annoying problem of the vibration of the battery pack, which continues to make noise in its compartment, albeit less markedly than the first Fiido M1.

At the wheel, the Fiido M1 Pro continues to be a full-fledged fat bike, and once you get used to that strange feeling due to the very large tires, riding the Chinese electric bike is really a pleasure: it is perfect for any road surface. 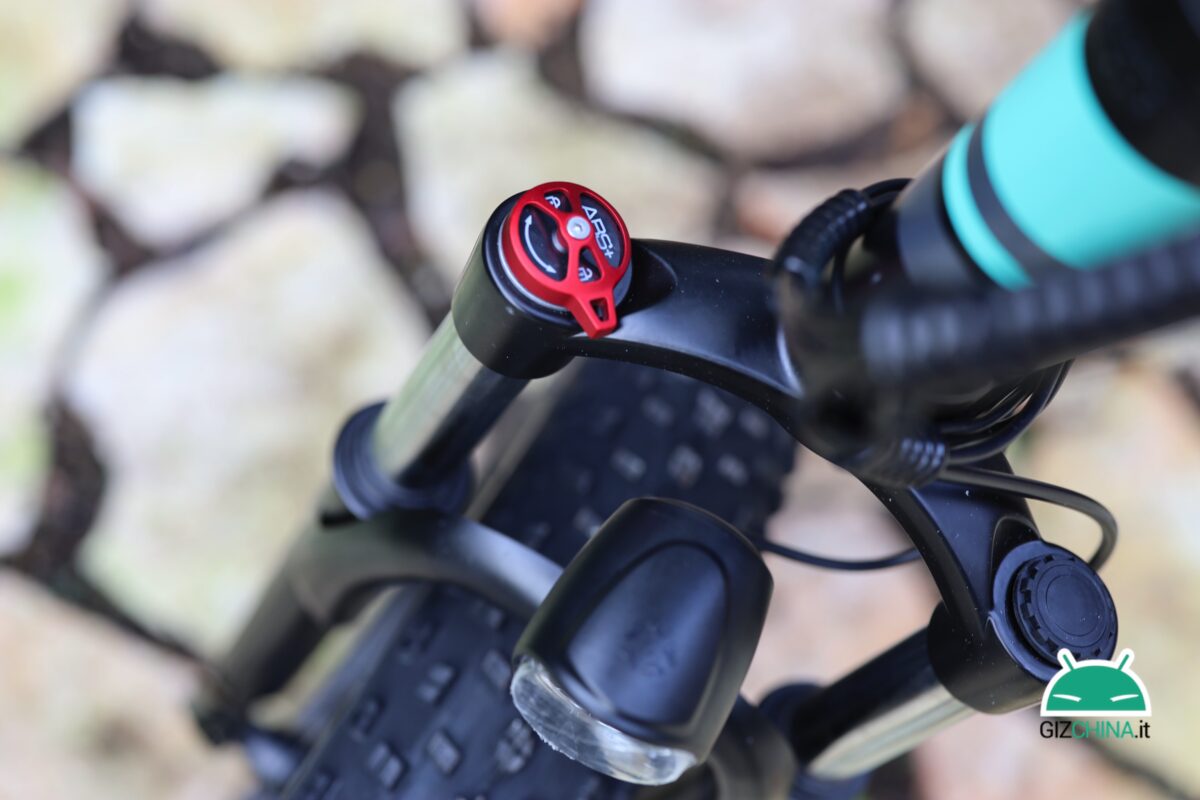 One thing does not give poco, especially considering that in some cities it is rather difficult to find homogeneous road surfaces: in these cases, in my opinion a fat bike is superior to any type of bicycle, despite the M1 Pro has wheels with a slightly below average radius.

It is precisely the tires that play the greatest admonition work and, flanked by the two forks, make sliding even on cobblestones, cobblestones and off-road, always comfortable and pleasant. And it is despite the fact that the two shock absorbers are quite cheap, with a travel on the wheel of 55mm and lacking the rebound control, so they are probably either elastomer or spring. The front fork is also adjustable, but even if set to "soft" I personally found it too stiff. 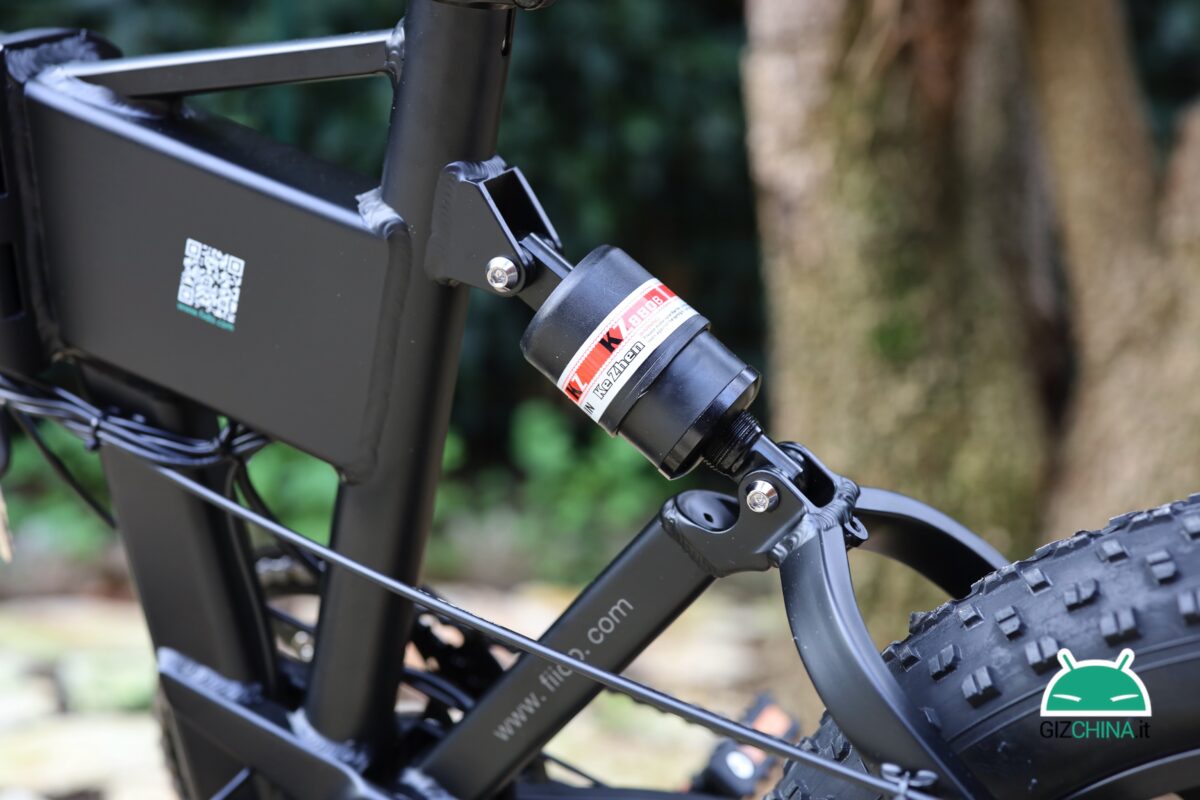 Also excellent mechanical disc brakes, which are present both front and rear and which guarantee prompt and efficient braking, despite having noticed that they tend to flex slightly with the pressure of the calipers. 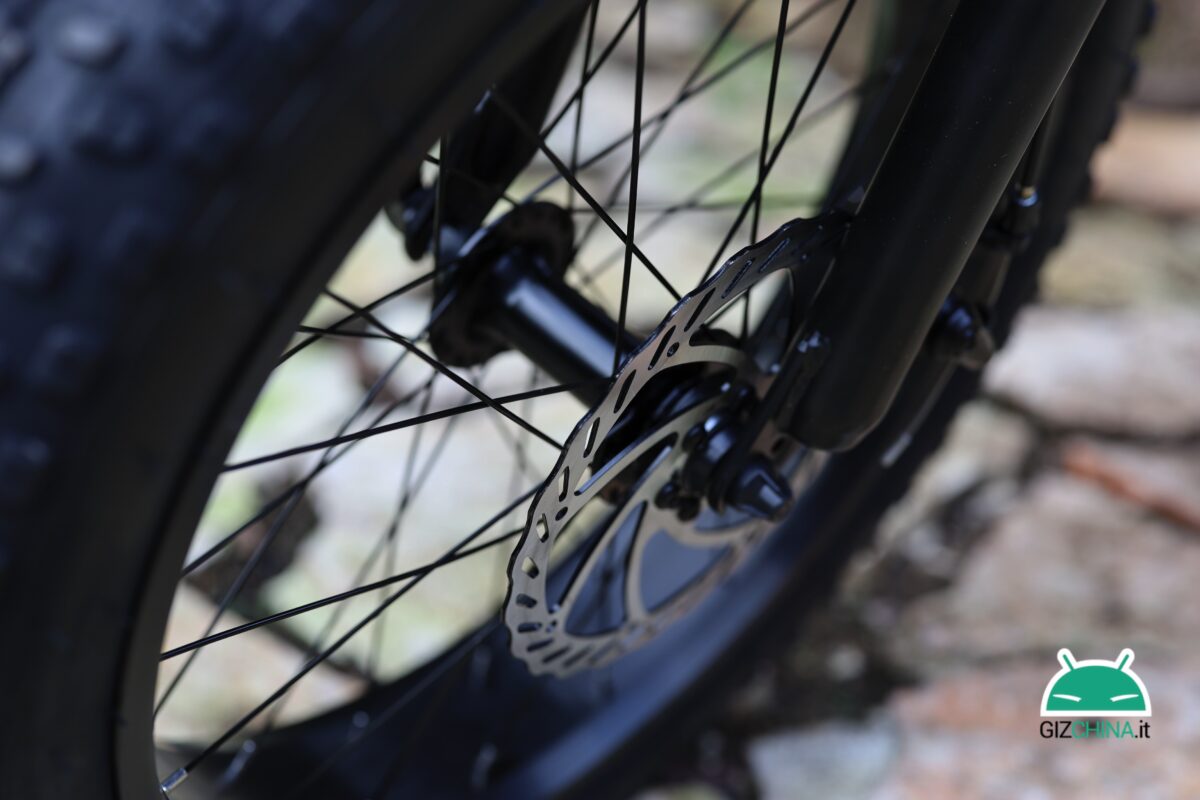 The price of the Fiido M1 Pro and of 930,10 €, using our coupon (found below), otherwise the figure goes up but the value for money is still excellent. It is an electric fat bike that integrates all the features currently available for a bicycle of this category, and is suitable for any type of road or season. And no, I admit that I didn't think I would like it that much and that the fact that it is completely illegal upsets me a lot. 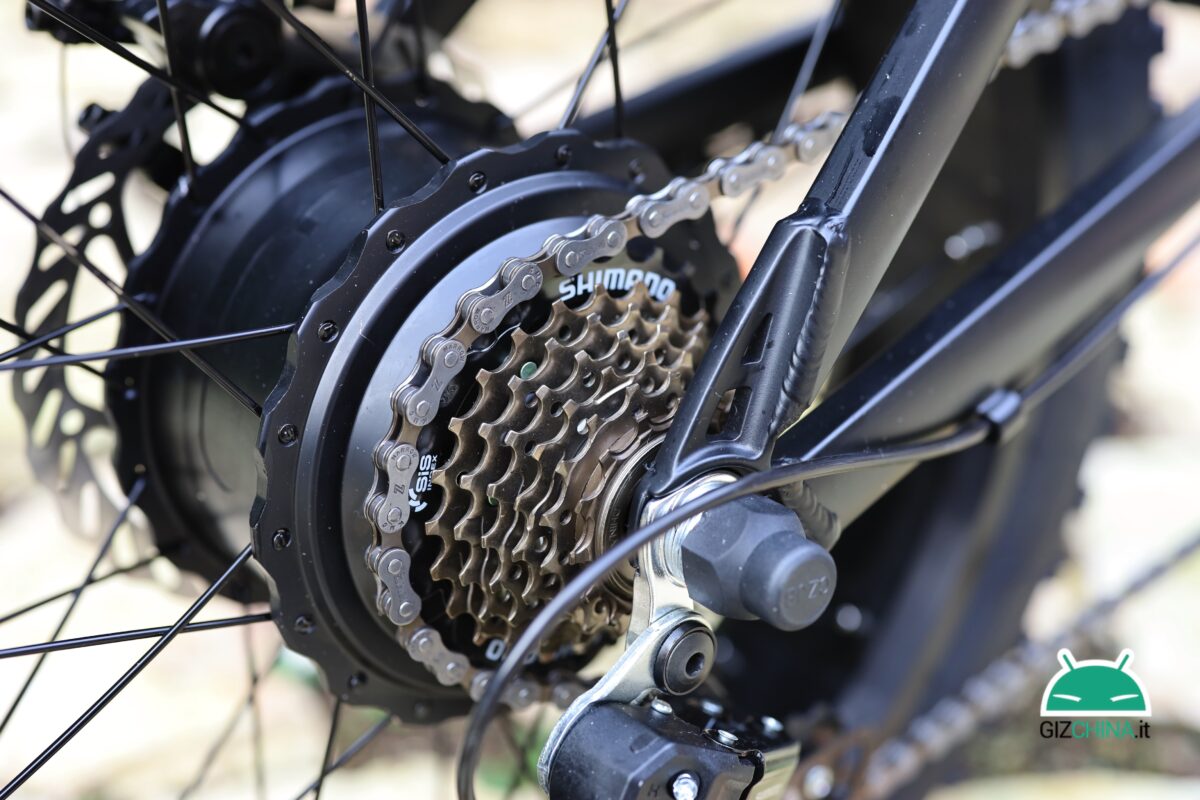 Because it is really powerful, it has big wheels, an improved battery with a super range, disc brakes, front and rear shock absorbers makes it one of the most interesting models of this moment. Of course it is heavy and perhaps not among the most comfortable folding electric bikes to load in the car, but the greater weight is only felt when you are not using it, because the motor (now more than ever) is proportionate to its size and makes it one of the most powerful, fun and balanced electric bikes I've ever had the chance to try.

Fight the cold in your car with the Hcalory heater: on offer...