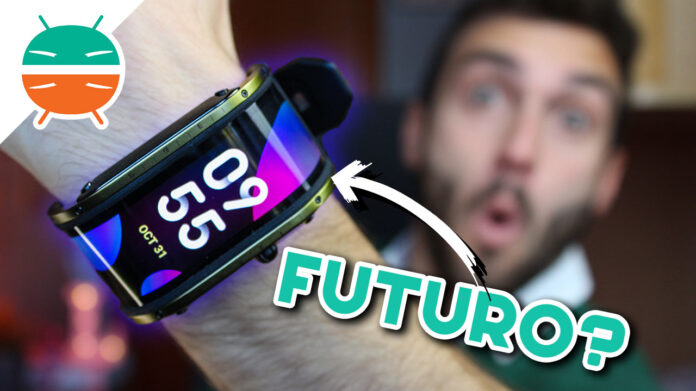 I still remember with nostalgia when it was possible to organize events and technology fairs, because on those occasions the strangest and most particular devices were discovered. During the MWC 2019, in fact, we got to touch the Nubia Alpha, the predecessor of Nubia watch, that is what was defined as one at the time wearable smartphone.

It has now been 1 and a half years since that day and the Chinese company has had the opportunity to analyze the sentiment and correct the game. In fact, that was a real wrist smartphone of the future as it integrated a camera, several everyday apps such as chat and maps and eSIM support.

Il Nubia watch which we will talk about in today's review is a more moderate wearable, but which does not want to give up innovation anyway. For this reason, the question compared to its predecessor changes: will this be the smartwatches of the future?

I open a small parenthesis: the first prototype of the company was shown even before 2019, or ad IFA 2018. I still remember that moment, as the device was not there during the first days of the fair, but was added to the stand a few days later.

The sales package is a nice box made of black hardcover with the image of the product. The overall appearance is that of a premium product and inside we find the following equipment:

I'd start with construction and by materials, as they are two aspects that can be objectively analyzed with respect to the design that may or may not like. Indeed, for its innovative wearable Nubia has reserved some excellent materials such as aluminum alloy el '316L stainless steel of which the frame and the case are made up.

I must say that the structure is very solid, we also have one IP54 certification against water (sweat and rain) and dust, but I don't hide the fact that I was a little afraid in using it. In fact, although it appears resistant to small impacts, a flexible display is always very delicate. The company has taken steps to make thicker and taller coatings for the display, but you should always be careful. 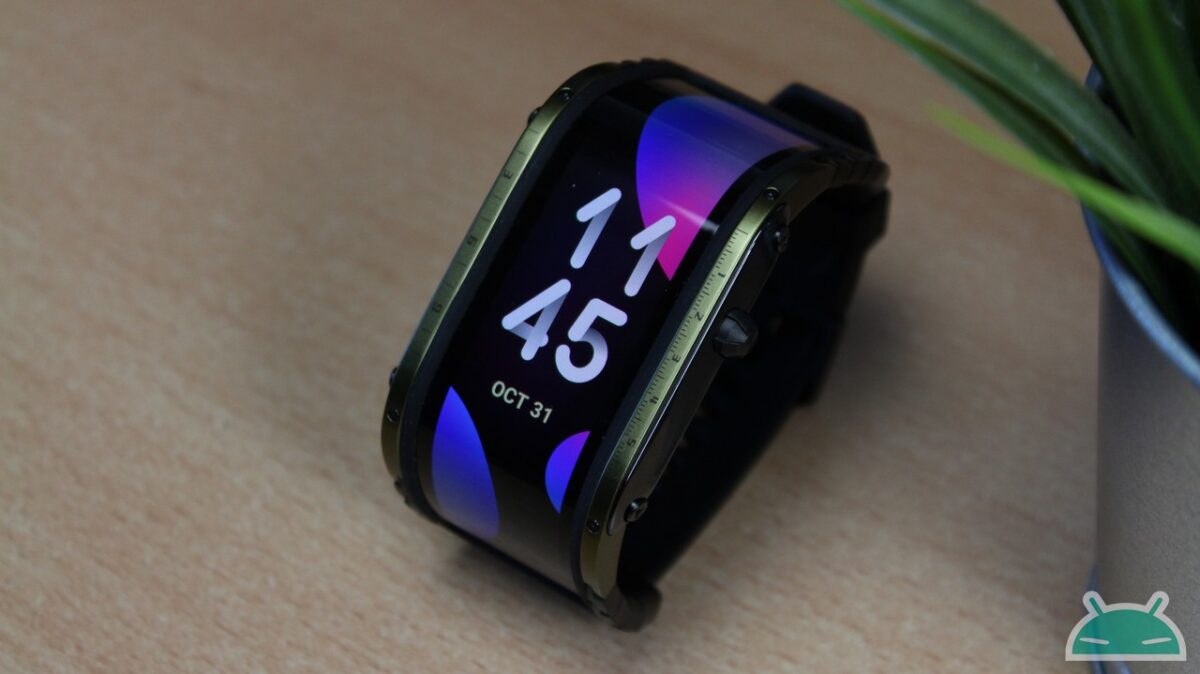 This is also because it has generous dimensions, or 125 x 41.7 millimeters with well- 14.4 millimeters thick e 98 grams of weight. A device that makes itself felt on the wrist and, despite having several sensors that monitor some sports, I honestly did not find it comfortable while running.

Coming to the design I think there have been many steps forward compared to Nubia Alpha, which was not particularly attractive due to the oddly rounded case. This remains a wearable particolare, strange, innovative looking and actually better live than from photos or videos.

All this does not exclude the fact that it is showy and I can't tell you if I like it aesthetically or not, as the display is so beautiful that I almost enjoy flaunting it to see people's reactions. 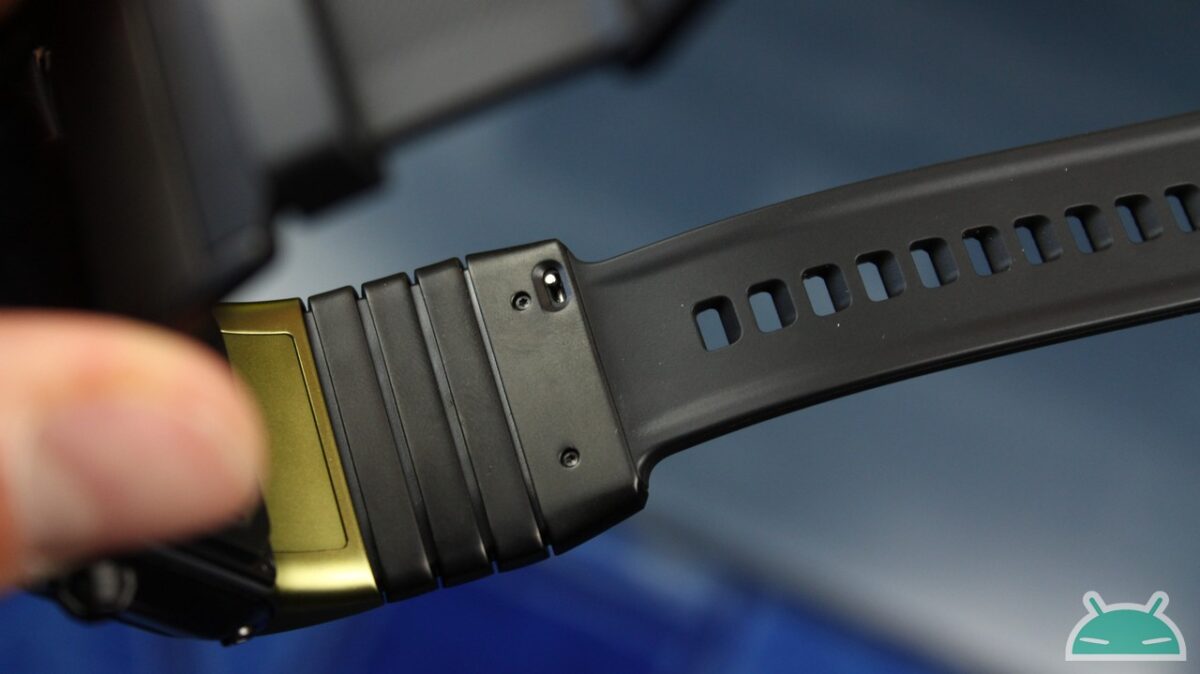 In all this the silicone strap it can be replaced thanks to a classic attack that will allow you to change it in seconds. 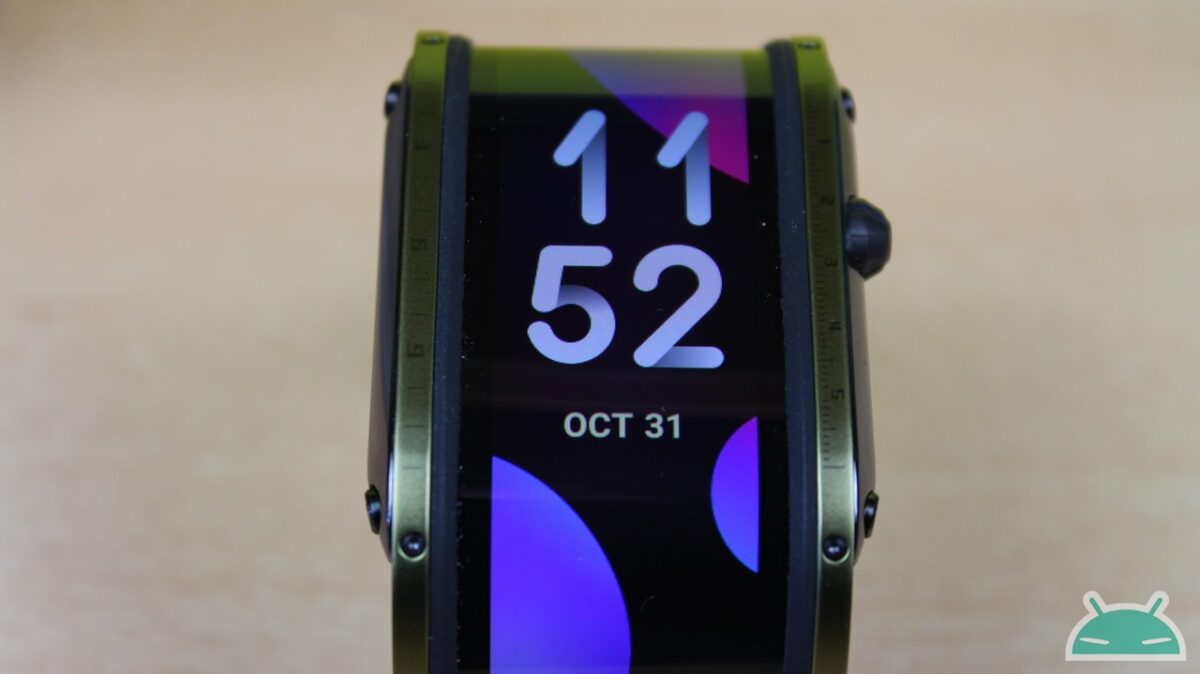 As mentioned poco ago, the curved panel is beautiful and it is certainly its main strength. You will not be able to flex it along the whole body, but only at its extremities. 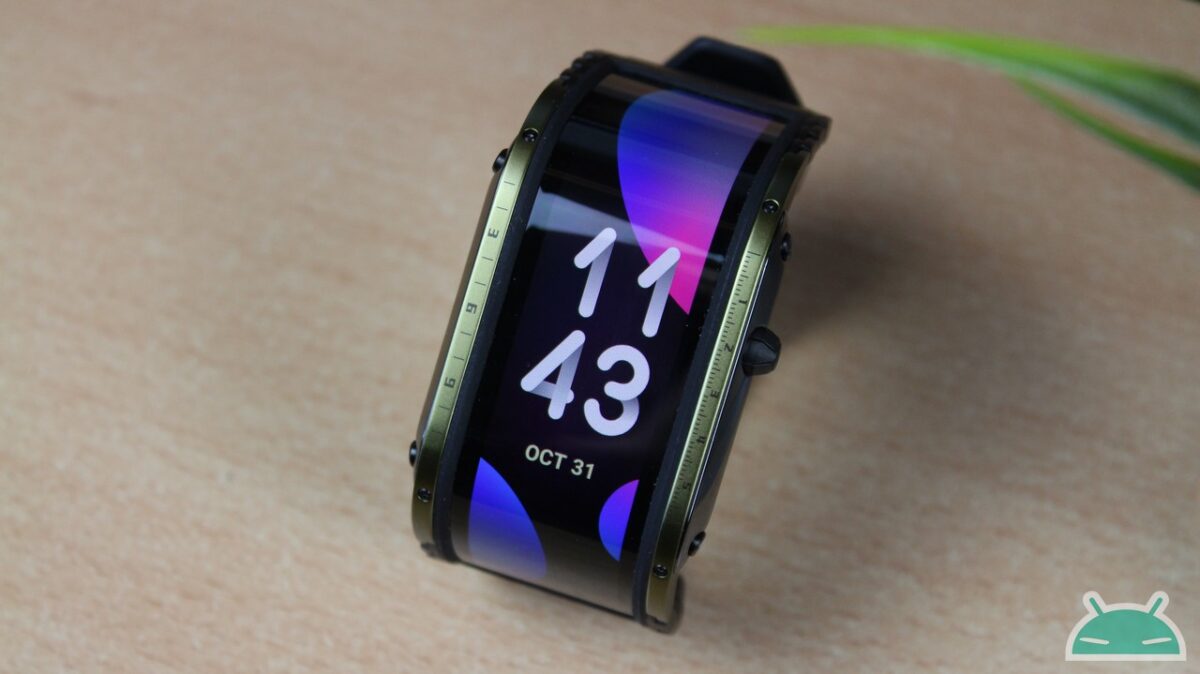 La brightness varies on 5 intensity, it can be handled manually and I found it very good even in direct sunlight. The colors are bright and beautiful loads, never too saturated and the blacks are excellent, but being an AMOLED we didn't expect otherwise.

In the settings we can find several customizations such as i backgrounds, all of which can be personalized with our photos, what should be some sort of screen saver (also customizable) and what should be the always-on display.

I use the conditional because in the settings it says "Show clock when screen off", but in fact the screen remains black and the AOD-style time is shown only when you rotate your wrist. This thing also works by turning off this entry, but the traditional wallpaper will be shown. In short, it doesn't make much sense, but it could be fixed with an update.

However, it will be possible to navigate the interface with touches e gestures and I must say that they work well apart from the gesture to go back which must be done slowly.

To move this Nubia watch a chipset takes care of it Qualcomm Snapdragon Wear 2100, which is inclusive of a quad-core processor with a maximum clock frequency of 1.1 GHz, 1 GB di RAM e 8 GB di internal memory.

We do not encounter particular problems in daily use as the smartwatch responds reactively to commands and everything runs smoothly, although the interface should be enriched with additional features and filed in some respects, but this is another matter that we will address later .

Through the app we will be able to pass the music on the watch and listen to it by connecting Bluetooth headphones. 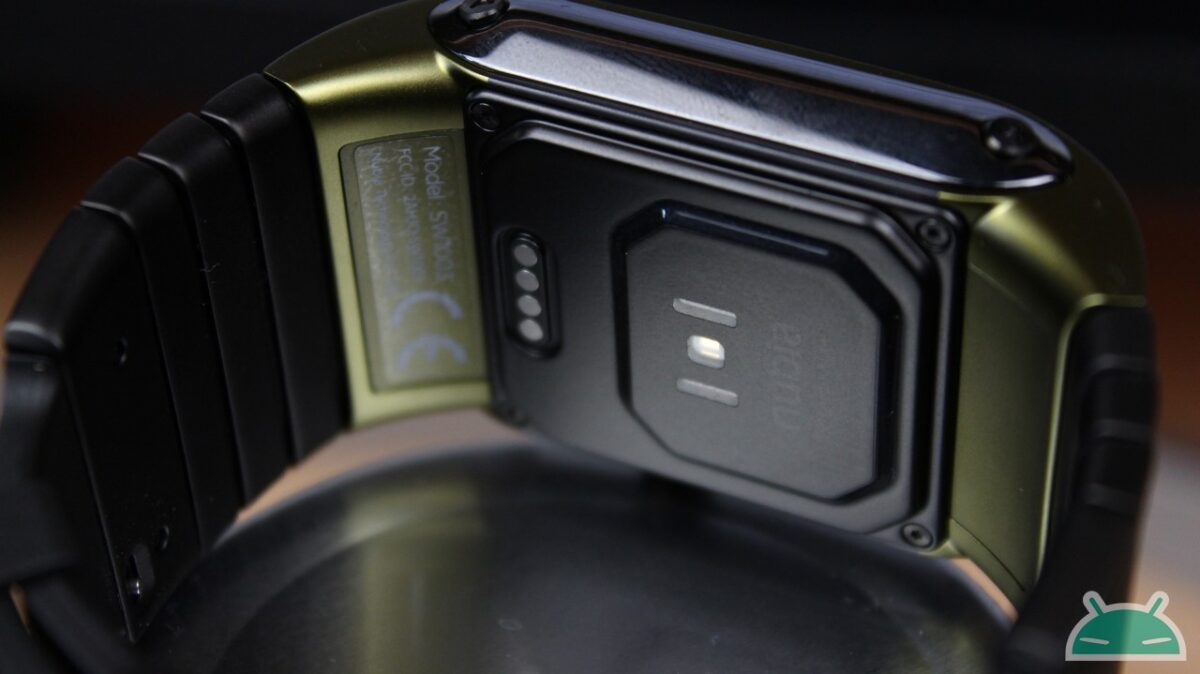 La Chinese variant has an additional feature, namely theNFC for payments, but it does not end there because theoretically there should be support foreSIM 4G, but on our unit Global we found no trace. So this could also be a Chinese exclusive feature.

In all this, as mentioned above, you can take advantage of this device stand-alone for workouts because it will keep track of the route taken thanks to GPS and in addition you can enjoy music with wireless headphones.

We cannot use it alone for calls because not having a SIM, it will have to lean on the smartphone via Bluetooth, but the positive aspect is that we can directly dial the number on the watch. Thanks to microphone and speaker we can entertain calls directly from him, too bad that the maximum volume is insufficient.

Il Nubia watch is based on Nubia Wear OS V1.0, that is a software with a proprietary interface that it is not based on WearOS unlike what the name might mean.

Usability is not bad, except that there are some imperfections and if it weren't for the fact that they could have optimized it better to take full advantage of the display.

Some bug concern the notifications because, apart from losing a few, once you have received a message, if you rotate your wrist it will not be shown, but you will have to go to the appropriate menu with some swipes. Speaking of the latter, we find some gestures to move in the UI, from the classic swipes to the pinch-in to put the display in stand-by.

Also, if you are viewing a message you will have to click on the item "Close" to go back and use the wearable, as neither the swipes nor the physical home button will react to commands. Closing the notifications discourse, the messages are shown entirely, but it will not be possible to reply or listen to audio messages, but we will be able to see the emoji.

I would have expected more functionality sincerely, as well as more sport since we find some only 4: Free Workout, Outdoor Walking, Indoor Running and Outdoor Running. If we think about it in the end they can all be aspects that can be improved through an update, but to date the Nubia watch it looks like this.

As regards the monitoring of sports and health, therefore, I was able to make some comparisons with theAmazfit Band 5 which I reviewed recently and noticed some differences in terms of passivated e sleep monitoring.

In fact, while in the heartbeat the two good or bad are equivalent, i passivated and meters of Nubia they tend to be overestimated. In fact, it has happened several times that as soon as I wake up in the morning already 100 meters made, while in reality I have always stayed in bed.

With the GPS of the active smartwatch I thought it was slightly more precise, but in my opinion an update is needed to recalibrate everything a bit. During the run, however, it will be possible to monitor the steps taken, the route, the calories burned, the distance, and the duration of the activity.

For the sonno the speech is similar, theAmazfit Band 5 it turned out to be more precise in the moments of awakening and the beginning of sleep, while the Nubia returned slightly fluctuating results.

Under the body of the Nubia watch we find one battery da 425 mAh, which guarantees us one good autonomy. Honestly with such a display I would have expected to recharge it every day / day and a half, instead with 80% brightness, burst notifications, 1 hour of weekly activity, 5 daily heart rate measurements and GPS disabled I managed to get to almost 3 days of autonomy.

Theoretically you could further extend the duration, but already in my case the use was not particularly strong, so I doubt you will use it less (unless you turn off notifications and stay in low brightness).

Charging takes place via the supplied base which must be connected to the Micro USB cable.

At this point it is time to draw conclusions and what I have to say is that Nubia had an idea bella, futuristic e visionary which, however, at the moment he needs to have more support. On the other hand, the devices that innovate first are always a bit of a mix between gods prototypes and to the style exercises designed to fascinate fans of the sector, but which do not get a good response among public opinion.

In fact, it is not a product that theaverage user would buy for the simple fact that it could turn out uncomfortable e poco practical since at the moment it is not a smartwatch suitable for productivity, but not even for sport given its shape.

Like the first leaflets this is not a product for everyone, I think that it too is mostly addressed to collectors, to those who always love to have the main news and to those who want to stand out from the crowd.

That said Nubia it should make several changes to the software to make the detections more accurate and to fix all those aspects that make it poco practical.

Il Nubia watch is available on the official store a 219 €, although it is currently out of stock. I advise you to keep track of it on the link I left you poco ago, as it may be available again at the time you are reading the review.

The worst Chinese smartphones in history

LeTv brings ANC to all ears with the Ears Pro