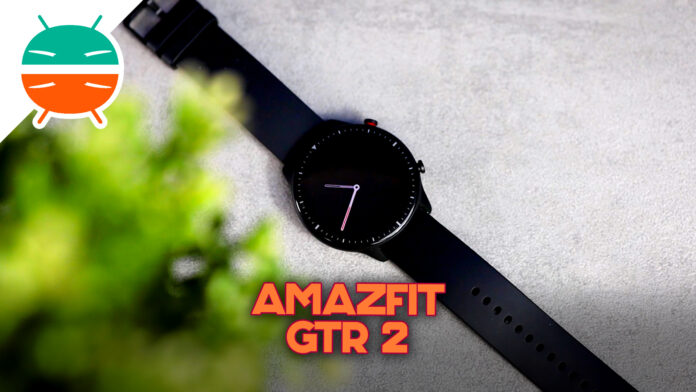 Amazfit GTR 2 and Amazfit GTS 2, are clear proof of how Huami continues to prove to be one of the most active companies in the world of smartwachs. The company, in a few months, presented 3 devices with different characteristics and price ranges, with which it has made enormous progress both in terms of design and technical characteristics, while continuing to maintain the excellent quality ratio. price of its products.

All characteristics that we also find in theAmazfit GTR 2, what we can define a more "casual" version ofvery elegant Zepp Z, which is perhaps the most “attractive” smartwatch of the new generation of devices.

The packaging of Amazfit GTR 2 it follows the line of the other products of the brand and, therefore, is nothing special. Inside we find:

Take the design of the first Amazfit GTR and forget it totally, because the company's new smartwatch takes from the previous generation only the fact of having it available two side buttons, otherwise everything is new. And also the design has totally changed compared to the first exponent of the GTR series, in favor of cleaner lines and a frame that is one with the glass that covers the entire front of the watch.

And although probably not for everyone the new design could be more beautiful than the one seen in the first generation, it is objective to admit that the change of direction taken with theAmazfit GTR 2 has made it a smartwatch with a lighter and much less "slob" than the first GTR. And it is also noticeable in the thickness of the suns 10.7 millimeters, and in the very low weight of 31 grams, which is 17 grams less than the first Amazfit GTR. Which is not bad. 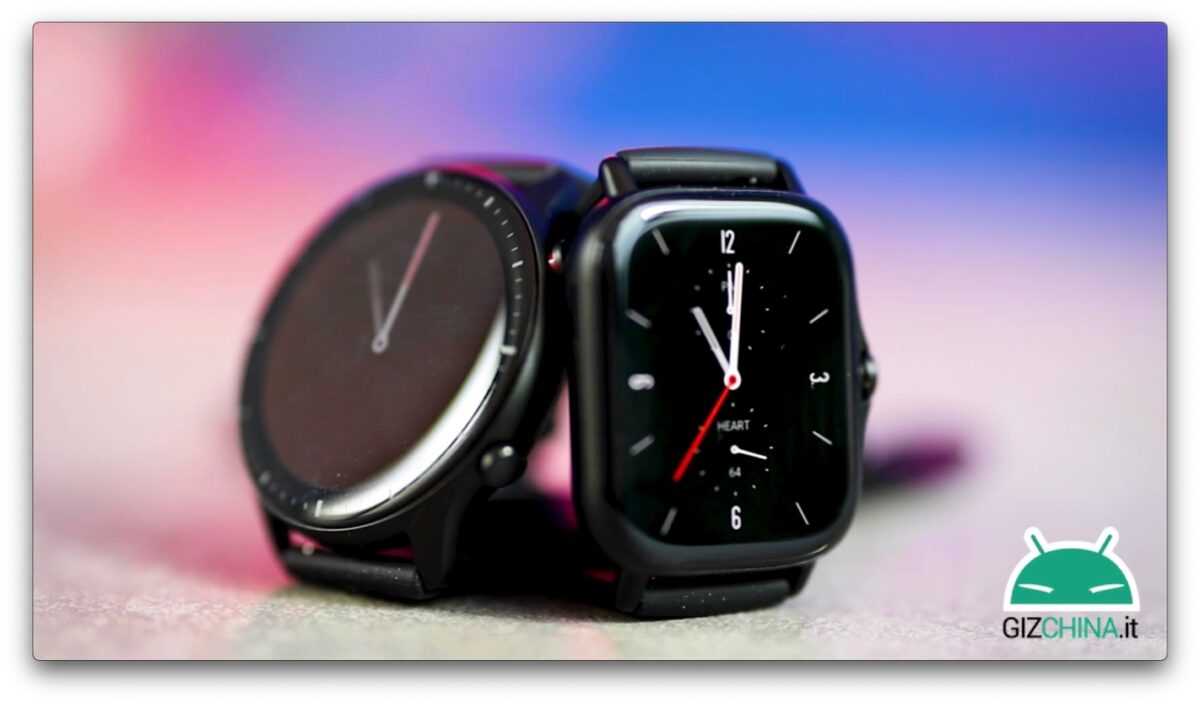 In the lower part of the case, there is the Bio Traker sensor for measuring the heartbeat, theSpO2 and stress, near which we find the two pins necessary for the connection to the magnetic charger which, therefore, is not induction like in the Zepp Z.

On the wrist, theAmazfit GTR 2 it is quite comfortable, also thanks to the silicone strap with 22 mm connection which, however, for a smartphone with such a nice design could be too "raw".

Nothing new on the screen. OnAmazfit GTR 2 a panel was used 1.39 "AMOLED circular which, most likely, is practically identical to the one used last year. And believe me, that's not a bad thing at all. The display is able to guarantee a resolution of 454 454 pixels x, very vivid colors and deep blacks that allow the panel itself to seem one with the frame and case of the device. 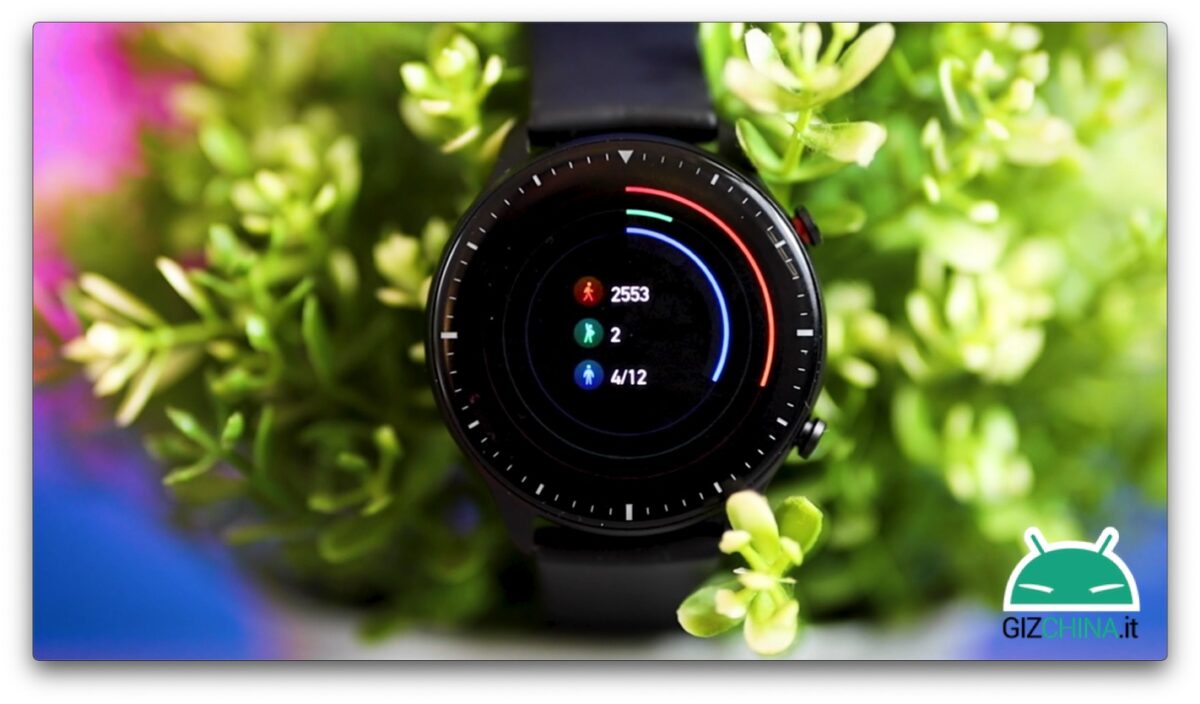 And even in this case the brightness is excellent, very close to 450 nits, and also has automatic adjustment thanks to a brightness sensor integrated in the smartwatch. There is also the mode always-on which, as in the Zepp Z, follows the dial theme set in the watch, but with a stripped down interface and only showing the time. However, it gives a very pleasant sense of continuity but, clearly, the activation of the AoD will negatively affect the battery life.

One of the most important innovations from the hardware point of view inAmazfit GTR 2 lies in the integration of a microphone and a speaker, with which not only can you interact with Alexa (Amazon's digital assistant which, however, we will talk about shortly), but also answer phone calls arriving directly from the smartwatch as it happens with traditional hands-free, via Bluetooth 5.0 which always guarantees a stable and reliable connection. 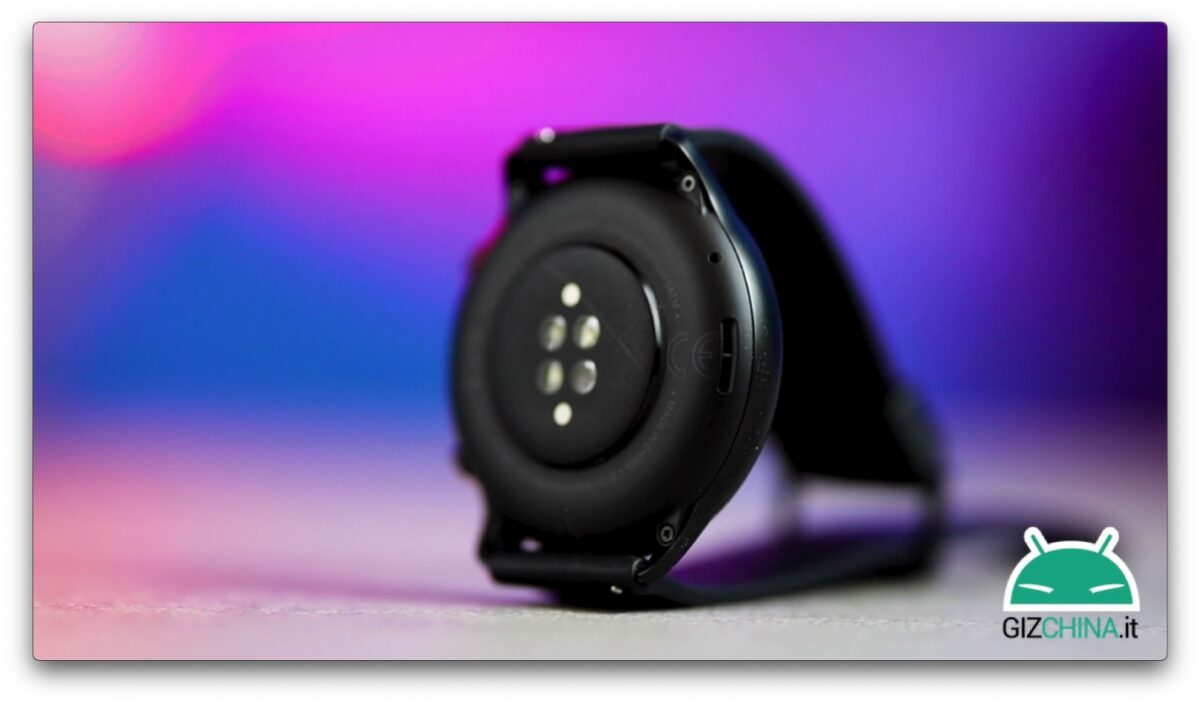 And it's a great convenience, as long as you accept the fact that the speaker playback volume it's not that very high, and that this function can only be used in environments that are not too noisy. The microphone, however, on its side does an excellent job and allows the interlocutor to listen without too many problems.

Then there are the GPS, assisted by Glonass, which guarantees a rather fast (but not very fast) fix, as well as - clearly - the BioTracker sensor. It is a smartwatch capable of going underwater up to 5 ATM, but WiFi and NFC are still missing. Two absences that are undoubtedly justified by the economic selling price of the device.

Like all the other exponents of the company, also theAmazfit GTR 2 it is compatible with both Android and iPhone and is managed by the app Zepp. To be honest, from the software point of view there are not many new features and both inAmazfit GTR 2, that in the Amazfit GTS 2 and in the Zepp Z, the functionalities are identical and continue to maintain a very fluid user experience full of options. And let's immediately put the dots on the "i": even if all Huami products boast integration with Alexa, Amazon's digital assistant is not yet available in Italy, and will be added with an OTA update that is expected to arrive in the coming months.

As for Zepp, we always talk about the same pleasant and graphically rich application, with a non-confusing interface, in which you can find all the main items in the home. From here it is also possible to start some physical activity or manage, also, everything concerning notifications, receiving calls, goals, all the clock settings and much more, with a very high level of Customization. You can even customize the vibration, setting a different set from the standard one.

The software installed on the smartwatch is also very nice. THE quadrants There are 5 pre-installed, but more than 50 can be synchronized through the application. Some are pretty cool, and others are even customizable to show information that really interests us. By scrolling to the two sides you can access the widget that we have selected, such as that of the current physical activity, that of the music control, that of the PAI value or the heartbeat recorded 24 hours a day. 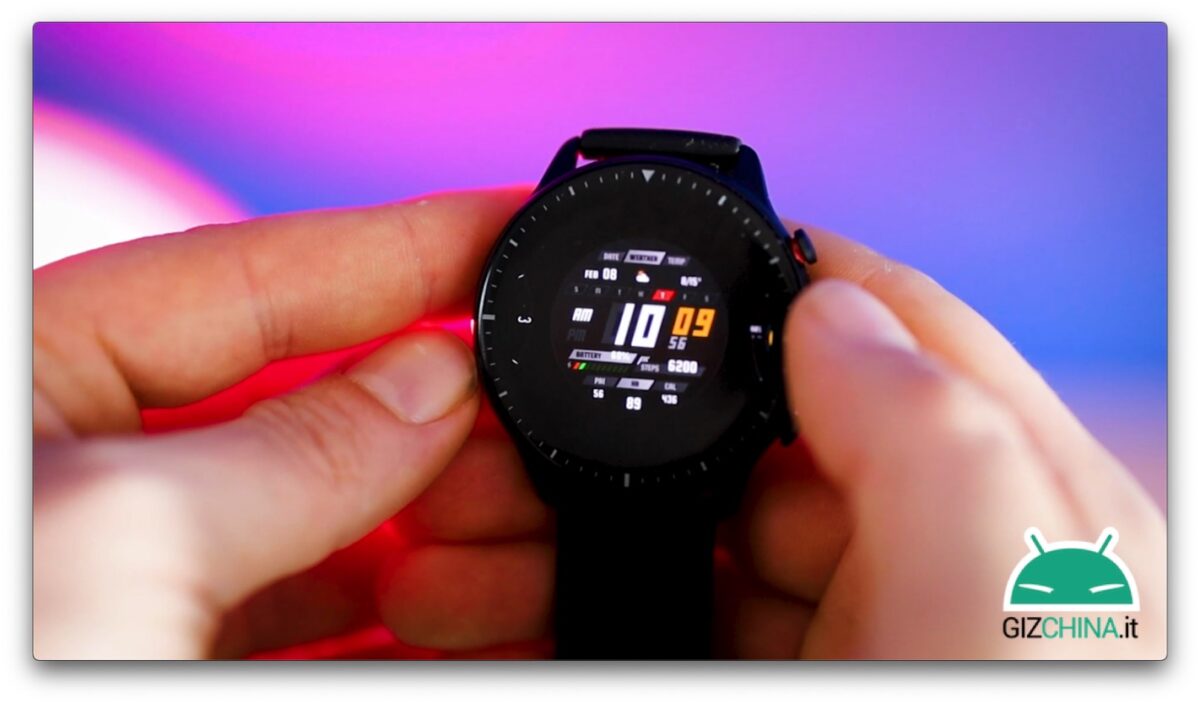 Scrolling down from the home page you will access the quick commands, in addition to the battery status and the weather, and you will have 8 toggle with which you can, among other things, activate the do not disturb mode or the always on screen.

Finally, by scrolling up you can access the latest notifications received. From the application you can choose which ones to receive, and they will always arrive quickly and on time. Unfortunately, however, it continues to be the inability to respond to messages received, and the display of some emojis still is poco curated. Some applications, such as WhatsApp and Telegram, will generate both a cumulative notification (such as, for example, 4 messages received) and individual notifications.

As for fitness, theAmazfit GTR 2 is able to keep track of 12 sport different, including the classic walk, running, the new in the pool, cycling and so on. The pedometer is very precise and showed a discrepancy of about 5% compared to the measurements made by an Apple Watch Series 6, and the detection of the heartbeat, fast and punctual, and the automatic sleep detection that never misses a beat and also allows you to set, in a completely automatic way, the do not disturb mode: when the smartphone realizes that the wearer has fallen asleep, it will automatically block the arrival of any notification so as not to disturb sleep. 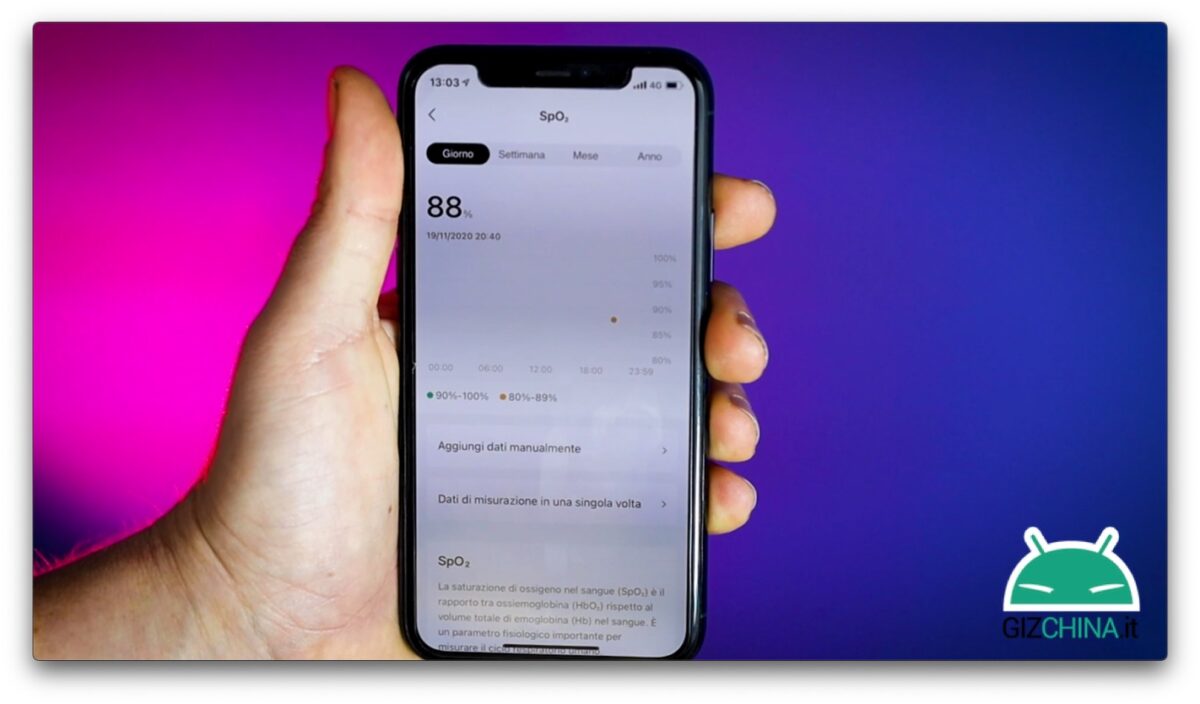 What keeps baffling me is there oximeter accuracy which, perhaps influenced by a bad positioning of my, my arm or even the watch itself, has repeatedly detected a percentage of oxygen in the blood that has varied from 90% to 93%. And it is indeed a worrying figure, and totally discordant from the 98% detected by a traditional oximeter.

The battery integrated inAmazfit GTR 2 it's good 471 mAh and, in our tests, it was able to guarantee about 13 days of autonomy without ever having to recharge the smartphone. And it is clear that this is an excellent goal, to which in fact we have already been used to by Huami, which however drops to around 5 days if the AoD were to be activated. 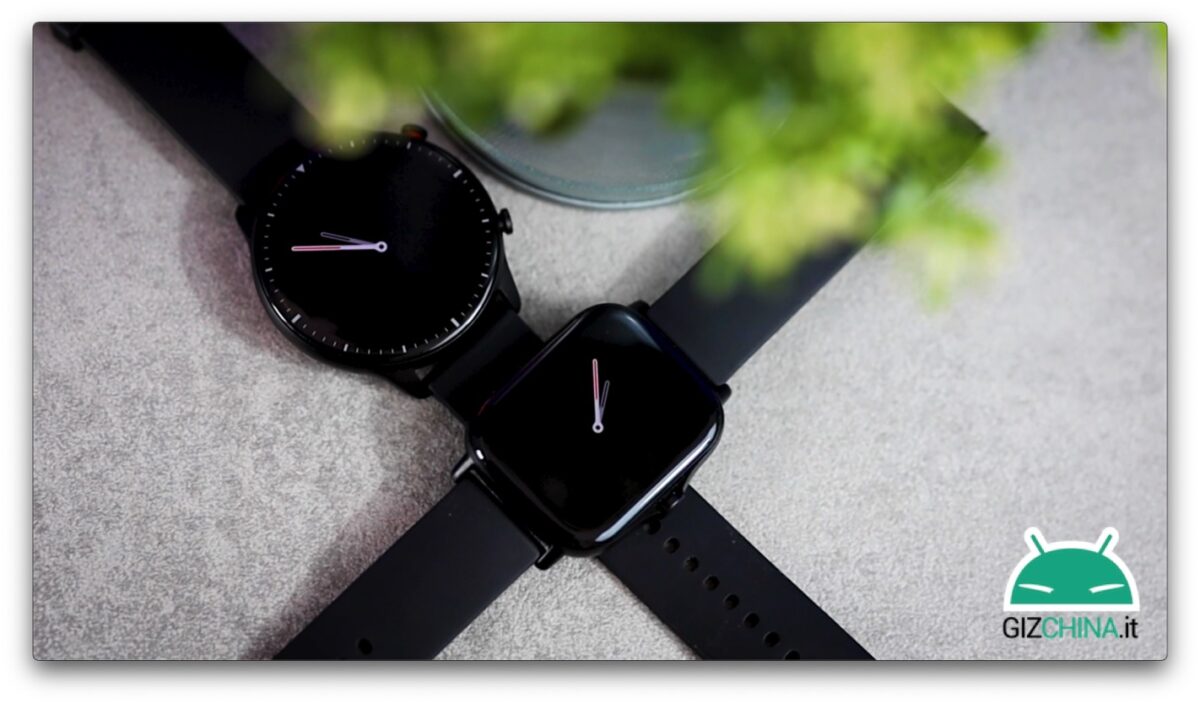 Charging times are average: to go from 0% to 100% battery, they will be necessary around 2 hours with the proprietary charger which is included in the package. But, in short, having to recharge for a couple of hours, to have about 13 days of battery, is a price that I'm sure won't cost anyone much.

The launch price of theAmazfit GTR 2 and of 169,90 €, and it is useless to go around it or make nonsense speeches: it is an excellent price, perfectly suited to the quality and functionality of the product and in line with what the market is asking for in this particular period. 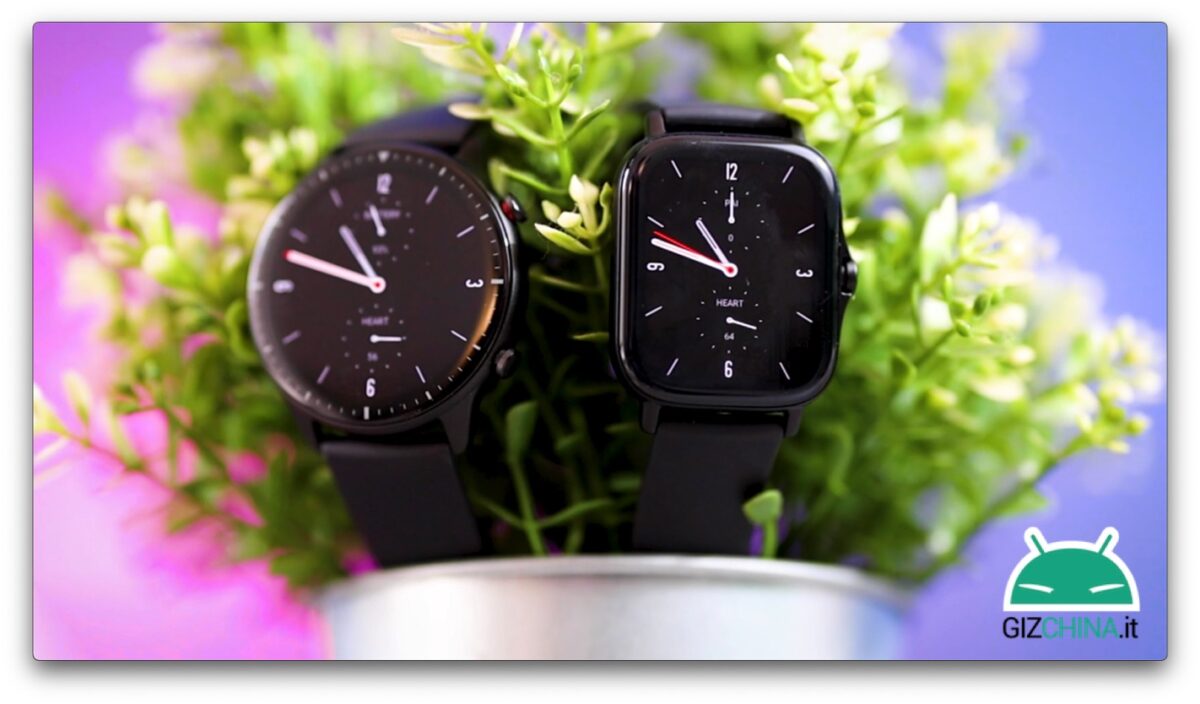 In short, theAmazfit GTR 2 is the excellent classic Amazfit. Of course, it has not been totally revolutionized compared to the previous generation, but it continues to bring the main features, and improves them with the addition of speakers and microphone. The real revolution will take place when Alexa will also be available in Italy: only then will Amazfit smartwatches become real game changers, able to offer advanced functions at very low prices.