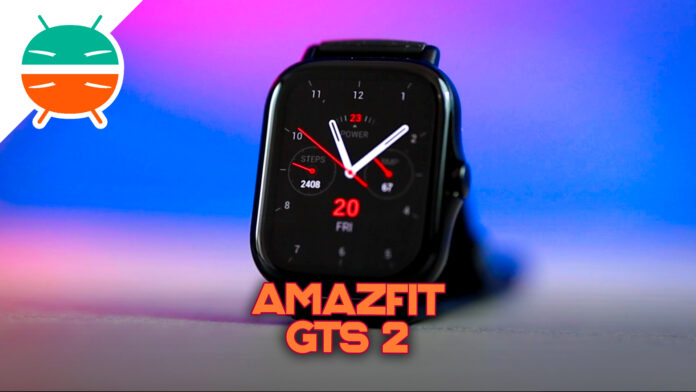 Rectangular (almost) borderless display, SpO2 detection, super autonomy, possibility to memorize your own music tracks and Alexa integration. These are the main features of the new Amazfit GTS 2, the new Huami smartwatch, which continues its march towards the democratization of these wearable devices, without sacrificing the quality of design and functionality.

The packaging of Amazfit GTS 2 it follows the line of the other products of the brand and, therefore, is nothing special. Inside we find:

L'Amazafit GTS 2 continues to carry with it the design of the previous model, enriched by a case with a profile that follows the only button on the device laterally. Unlike classic circular smartwatches, Amazfit GTS 2 still does not have a ring, and the display AMOLED da 1.65 " is wrapped directly by the case made of aluminum alloy, with a concept very similar to that seen in the Apple Watch

And if, on an aesthetic level, the absence of visual elements on the dial can be a not indifferent value, on the other hand we find a display completely exposed to shocks: for this reason those of Amazfit have thought of protecting the 3D glass with carbon treatment which, theoretically, should make it very resistant to scratches.

In short, the aesthetic profile Amazfit GTS 2 is - in my opinion - fully promoted. Despite using a design that is not exactly original, we still find a well-built product perfectly optimized also in terms of dimensions and weight: with its 42.8 x 35.6 x 9.7 mm and 25.7 grams of weight, it is so comfortable on the wrist that feels when you wear it.

No news regarding the display, at least compared to the previous generation. In theAmazfit GTS 2 the same (excellent) 1,65 "AMOLED panel we saw in the previous generation was used, able to guarantee a resolution of 348 442 pixels x with a pixel per inch density of 341 ppi and a maximum brightness of 450 nits. 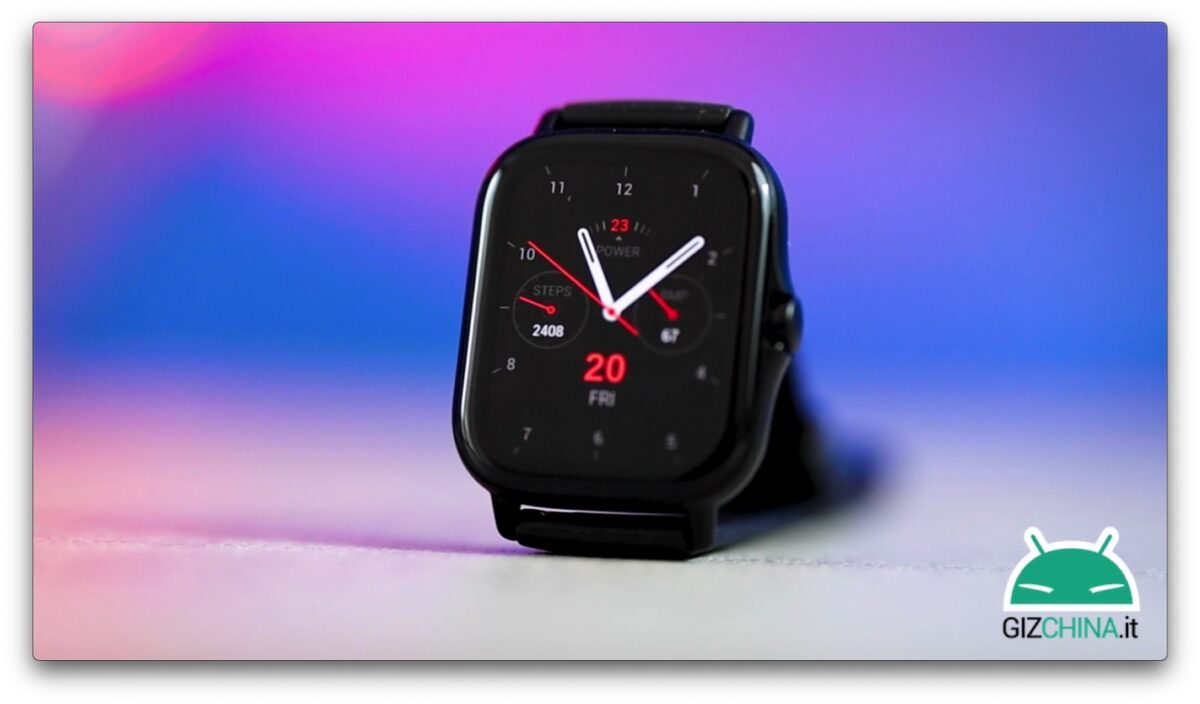 And it goes without saying that it is an excellent display, with vivid colors and absolute blacks on which, unlike the circular solutions (such as that of the new Amazfit GTR 2), it offers more space for information and allows you to view more elements in the many quadrants available.

There is also the mode always-on which follows the dial theme set in the watch, but with a stripped down interface and only showing the time. However, it gives a very pleasant sense of continuity but, clearly, the activation of the AoD will negatively affect the battery life.

Beyond the design and the display (and, shortly, the battery), the differences between Amazfit GTS 2 and Amazfit GTR 2. And also in the version with rectangular display, the most important news regarding the hardware lies in the implementation of a microphone and a speaker with which users can interact with Alexa (but, we will talk about this shortly ) and will be able answer phone calls directly from the smartwatch: the connection takes place via Bluetooth 5.0 and is always stable and reliable and, unlike the model with circular display, the speaker in the Amazfit GTS 2 in our tests was qualitatively more functional, able to reproduce the sound with a volume more suitable for phone calls. 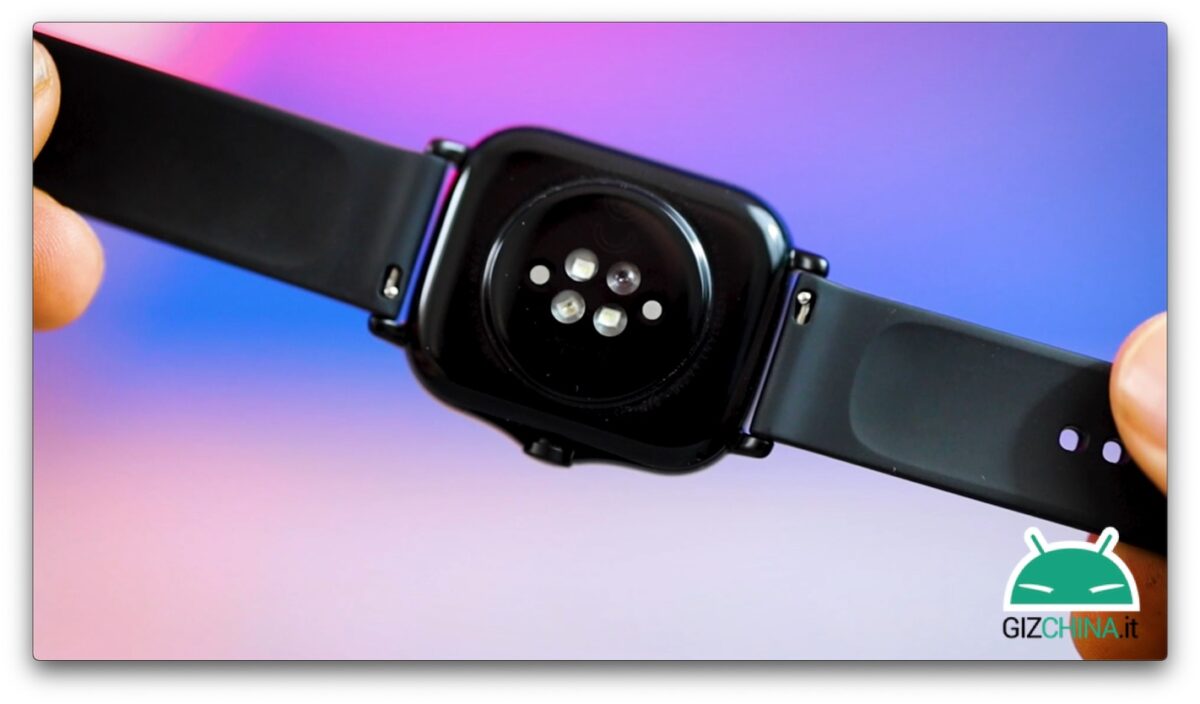 Then there are the GPS, assisted by Glonass, which guarantees a rather fast (but not very fast) fix, as well as - clearly - the BioTracker sensor. It is a smartwatch capable of going underwater up to 5 ATM, but WiFi and NFC are still missing. Two absences that are undoubtedly justified by the economic selling price of the device.

From the point of view of the software, the management app and the fitness, there are no revolutionary innovations in theAmazfit GTS 2 compared to the other products of the company. Everything is managed by the Zepp app, compatible with both iPhone and Android, which continues to be perfectly organized and customizable from a graphical point of view.

The smartwatch software is also always the same. Which is definitely not a bad thing, given theexceptional responsiveness and the large number of features it integrates. In any case, the gestures have not changed.

By scrolling to the two sides you can access the widget that we have selected, such as that of the current physical activity, that of the music control, that of the PAI value or the heartbeat recorded 24 hours a day.

Scrolling down from the home page you will access the quick commands, in addition to the battery status and the weather, and you will have 8 toggle with which you can, among other things, activate the do not disturb mode or the always on screen. 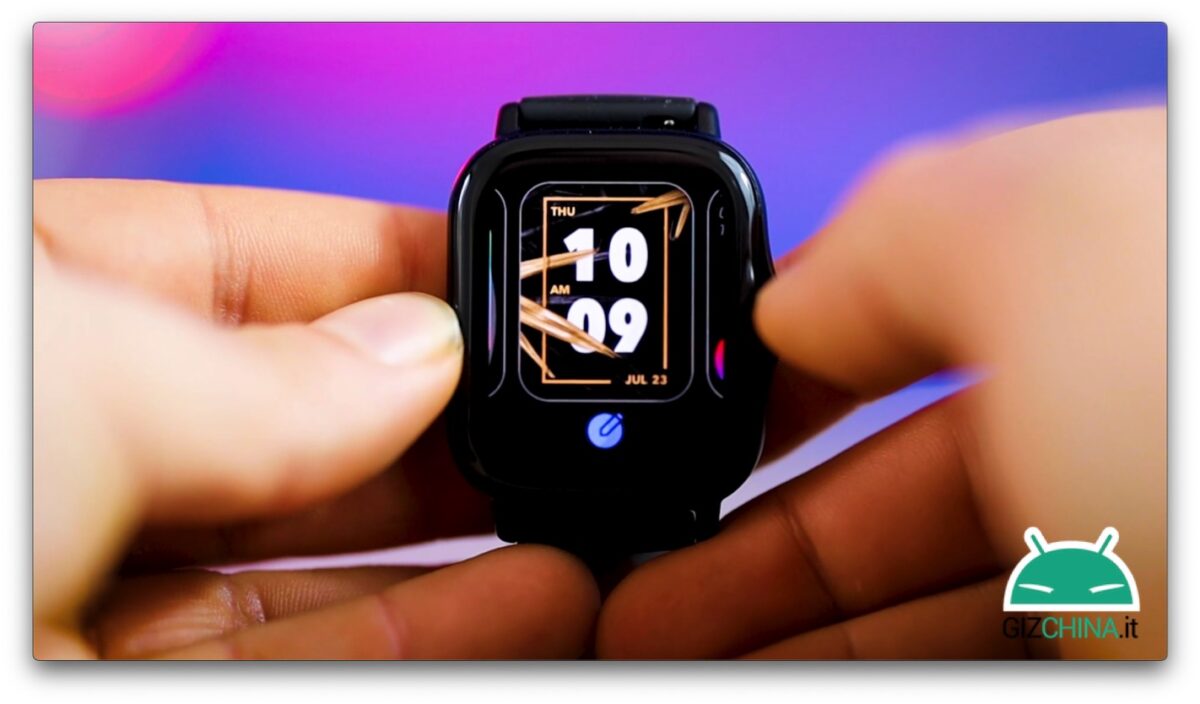 Finally, by scrolling up you can access the latest notifications received. From the application you can choose which ones to receive, and they will always arrive quickly and on time. Unfortunately, however, it continues to be the inability to respond to messages received, and the display of some emojis still is poco curated. Some applications, such as WhatsApp and Telegram, will generate both a cumulative notification (such as, for example, 4 messages received) and individual notifications.

As for fitness, even theAmazfit GTS 2 it is able to recognize and track 12 sports, which also take advantage of the GPS assisted by Glonass. The pedometer is very precise, as well as the detection of the heartbeat and the sleep analysis, which starts automatically and also has the possibility of activating the do not disturb mode in a completely automatic way.

I am still puzzled by the accuracy of the oximeter which, compared to the data detected by a "traditional" model, on the Amazfit GTS 2 are mostly staggered: while on the traditional oximeter, the percentage of oxygen in the blood detected is on average 98%, on theAmazfit GTS 2 the value ranges from 88 to 92%.

The battery integrated inAmazfit GTS 2 and from 246 mAh and, in our tests, it was able to guarantee about 5 days of autonomy without ever having to recharge the smartphone. And it is clear that this is a value that however drops around 3 days if the AoD were to be activated. 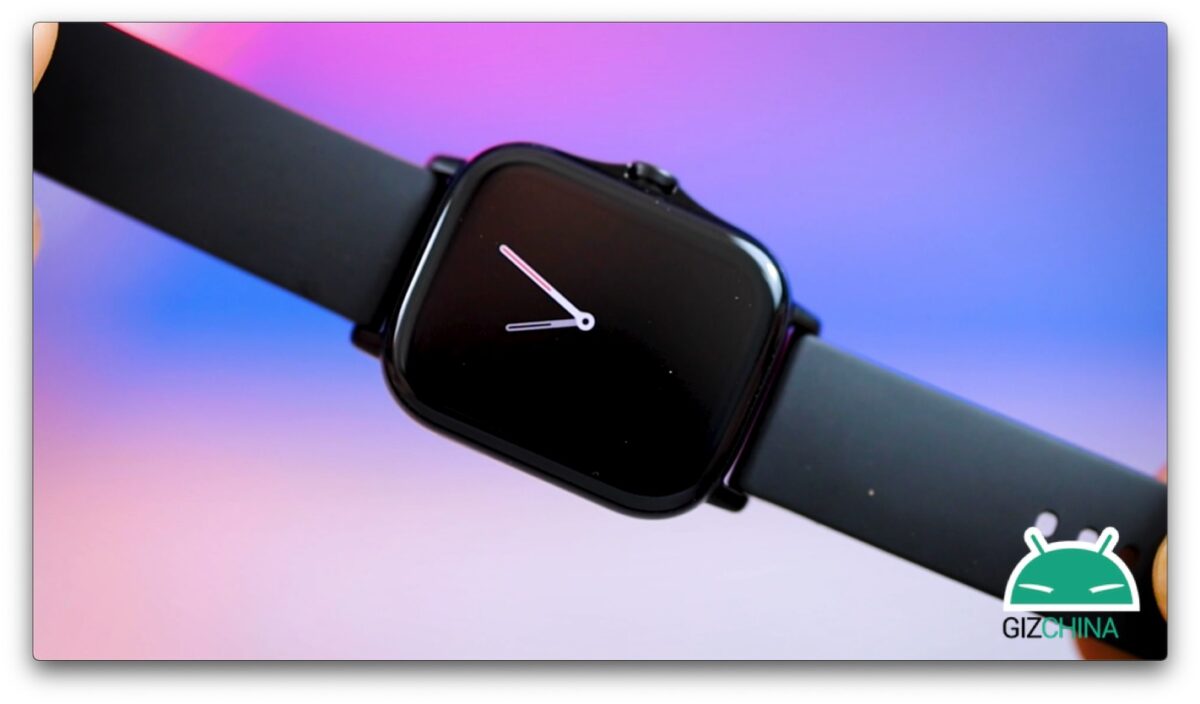 Charging times are average: to go from 0% to 100% battery, they will be necessary around 2 hours with the proprietary charger which is included in the package.

The launch price of theAmazfit GTR 2 and of 169,90 €, and it is a great price, adequate to the quality and functionality integrated in the device which, this year, was also enriched by speaker and microphone, and by future support for Amazon Alexa. 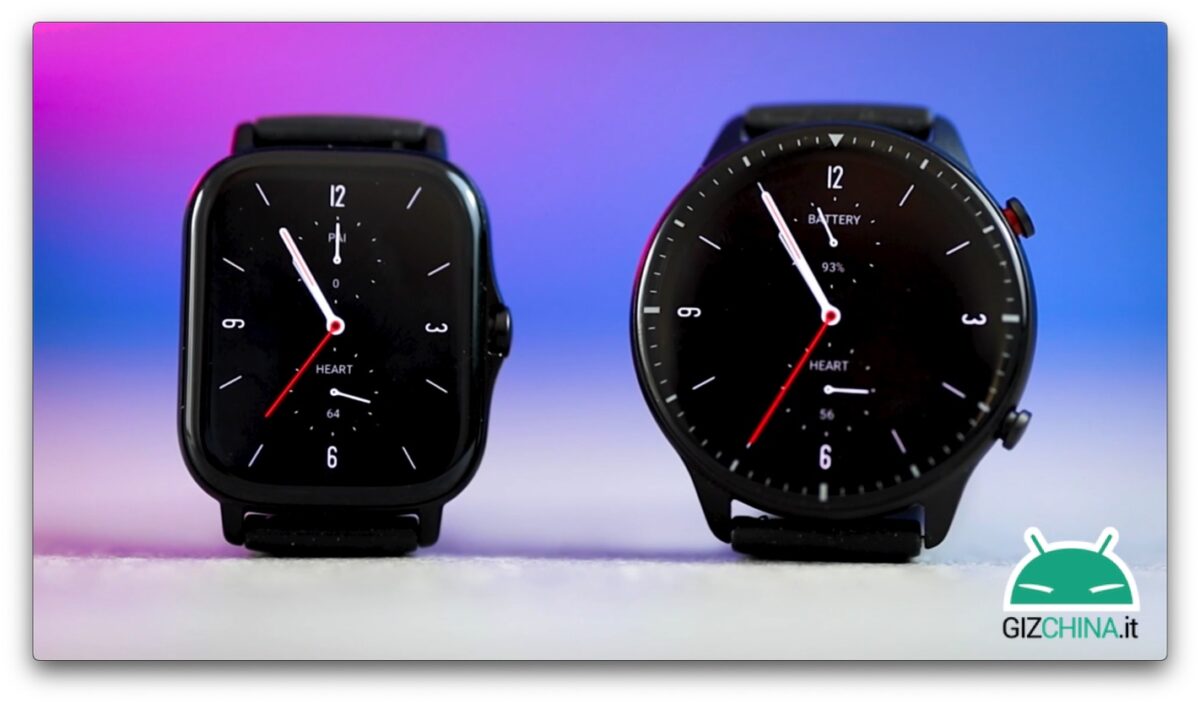 In short, theAmazfit GTS 2 is the excellent classic Amazfit. Of course, compared to the Amazfit GTR 2 the autonomy is much shorter, but the space on the screen is greater and the information that can be accessed is more.

Either way, the real revolution will come when it's available Alexa also in Italy: only then the Amazfit smartwatches will become real game changers, able to offer advanced functions at very low prices.

Redmi 9 Power coming soon: the launch would be expected in the middle ...

You will never guess who won the MKBHD photo contest