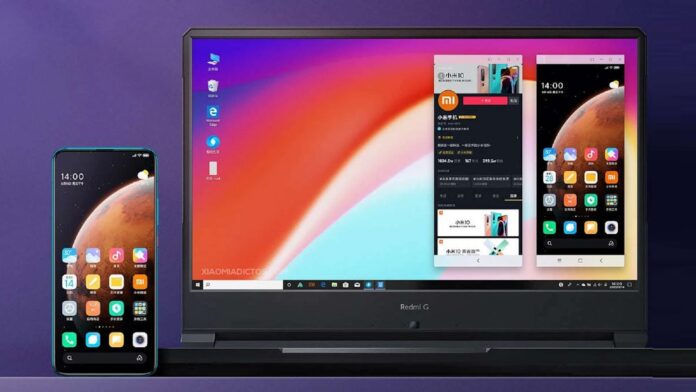 Apart from Samsung and Huawei, no one else has adopted the so-called Desktop mode on their smartphones, not even Xiaomi. However, the company has made progress to satisfy the desire of the community, as evidenced by the introduction of the new mode Cross-Screen Collaboration in MIUI 12.

If you think that Cross-Screen Collaboration is in effect a true Desktop mode from Xiaomi, you will probably be disappointed. In effect it is one screen transmission which, taking place via Wi-Fi, allows you to have the functionality of the smartphone on a paired PC. Just download the dedicated app, scan the QR code that is shown and the two devices communicate.

Compared to other transmissions of this type, the Cross-Screen Collaboration function of Xiaomi's MIUI 12 allows for deeper communication. Obviously the most obvious advantage is enjoying the contents of the smartphone on one bigger screen, especially for those apps that, like TikTok, don't have a desktop counterpart.

In addition to being able to open more than one app simultaneously in multiple windows, you can take advantage of the physical keyboard, much more comfortable than the digital screen. Additionally, files such as spreadsheets can be opened directly with the Excel PC app.

But it doesn't stop there: unlike the Desktop modes, where you have a separate instance separate from the machine it runs on, here you have both at the same time. This means that it is possible transfer files more conveniently between the two parties, without necessarily having to act via cable or third-party apps. Just open the file manager and drag them to one side or the other, like any USB stick or external hard drive.

What is it disadvantage compared to the Desktop mode of Samsung and Huawei? Which can only be used with a PC under Wi-Fi network and not on external monitors without Microsoft OS.

For the moment, the Cross-Screen Collaboration feature has only been released on Xiaomi mi 10 ultra with the latest update to MIUI 12.0.13.0 China Stable. The company is testing this novelty of MIUI 12 also on other models, such as Xiaomi Mi 9, Mi 9 Pro 5G and Redmi K20 (Xiaomi Mi 9T Pro).