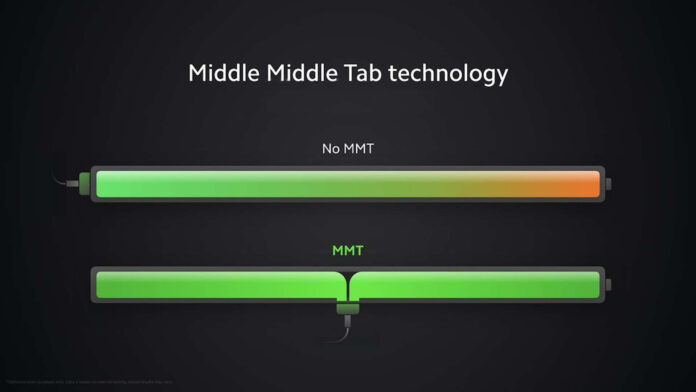 The introduction of the MMT fast charging is yet another chapter in the evolution of mobile technology by Xiaomi. For example, a few hours ago the announcement of the miraculous 80W wireless charging has aroused a lot of interest. Not to mention the I Charge Turbo at 120W record, one of the flagships of the Xiaomi Mi 10 Ultra. But if in these two cases we focus mostly on the charging power, with the new MMT technology we also talk about durability over time.

READ MORE:
Xiaomi Mi 11 would have the exclusive time on Snapdragon 875

MMT-type recharging can be found on three of the most recently introduced models: Xiaomi Mi 10T, Mi 10T Pro e POCO X3. On this triptych of devices there is a battery, more or less large, but always with support for fast charging 33W. This is not the highest power in circulation, but the aforementioned MMT technique takes care of the charging times.

With our advanced Middle Middle Tab battery technology, charging is more efficient now as electric currents charges in two directions. The massive battery can be charged up in just an hour with the 33W in-box charger. #Mi10TPro #PowerYourCreativity pic.twitter.com/nkfuPpPe8c

The acronym stands for "Middle Middle Tab“, An abbreviation that indicates the technique that is used to refuel these batteries. Usually, a battery is recharged starting from one extreme, “filling it” to the other extreme and this slows down. You've probably already noticed this for yourself: even with the fastest charging there is, it takes a lot less to go from 0% to 10% than from 90% to 100%. There is a very specific reason why this happens: the batteries we have on smartphones need a power failure when they are filling up. Otherwise, malfunctions, or even a breakdown of the battery, could occur.

Here's a secret about # Mi10TPro's powerful battery: Middle Middle Tab technology. MMT charges the battery from the middle, so a battery as big as 5000mAh will charge faster than normal batteries as electric currents travel in shorter paths.

On the contrary, the MMT technique that we find on Xiaomi Mi 10T, Mi 10T Pro and POCO X3 works differently. Instead of starting from one extreme, the electric current starts from the middle and flows towards the two extremes. This allows the Mi 10T series to charge its own 5.000 mAh in 60 minutes and at X3 to employ 65 minutes for his 5.160 mAh. With this technique, charging can be delivered at a more constant rate, as well as extending the longevity of the battery.