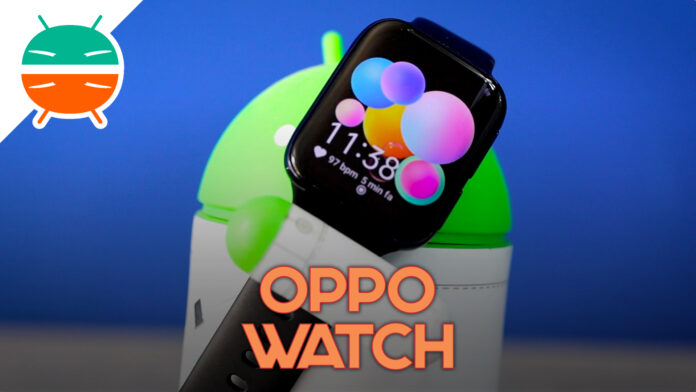 Let's face it, except Fossil, Armani or other fashion brands, the world of WearOS smartwatches isn't all that thriving. And that's why theOppo watch that's just what we needed. The first watch of the Chinese giant arrives in conjunction with the new one Oppo Reno 4 Series and it does so at a very interesting moment, in which the smartphone giant is increasingly trying to create its own ecosystem, consisting not only of mobile phones but also of TWS earphones and, now, wearable devices.

And yes, it is useless to go around it, Oppo's first WearOS smartwatch clearly seems to draw inspiration from another smart watch, but let's be clear: what matters is the production process, are the features and, above all (since we are talking about WearOS) battery life. Everything else is just chatter.

The packaging ofOppo watch it is characterized by the typical style of the company's products. On the front there is an image that represents the screen of the device with one of the different quadrants available, and inside it there is the support for charging which - to be used quickly - must be connected to the gold-plated charger.

Available in two sizes, from 46 and 41mm, if we didn't say that from a distance the Oppo Watch could easily be mistaken for an Apple Watch, we would try to hide the obvious. But guys, the construction process and the materials used in the first Oppo smartwatch are of the highest standard.

The version we received in the test is the 46 mm one, characterized by a display from 1.91 inches with a resolution of 402 476 pixels x and a pixel density per inch of 326 ppi. The panel is a AMOLED curved which slides perfectly into the aluminum frame and which houses two physical side buttons, one of which is customizable.

And it is precisely the customizable button which is characterized by an internal finish in emerald green and, among other things, is used for switching the device on and off. 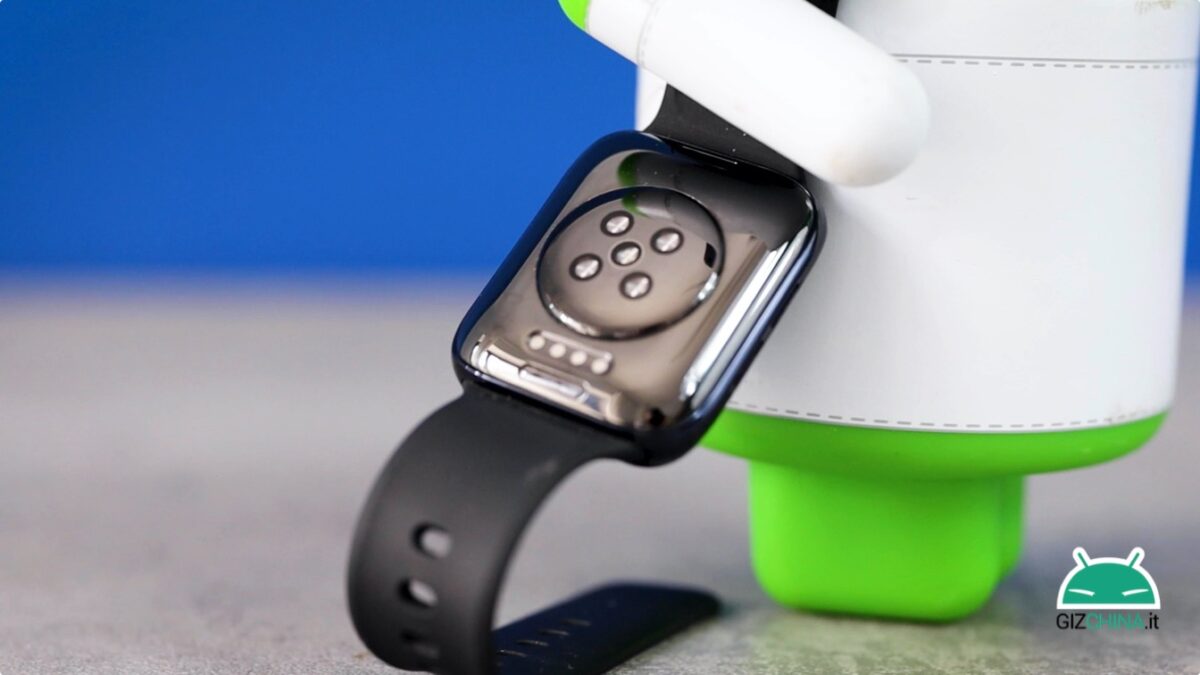 On the back, the structure is made of plastic, although the module in which the heartbeat sensor has been inserted is made of ceramic, and a speaker and a microphone are integrated with which not only you can make phone calls, but which will also allow interactions with Google Assistant, the digital assistant of Big G. It is a pity, however, that in terms of audio quality in the call, the received sound was successful rather metallic and not particularly pleasant to use, while the audio captured by the microphone is quite good and allows the interlocutor to listen without any problem. 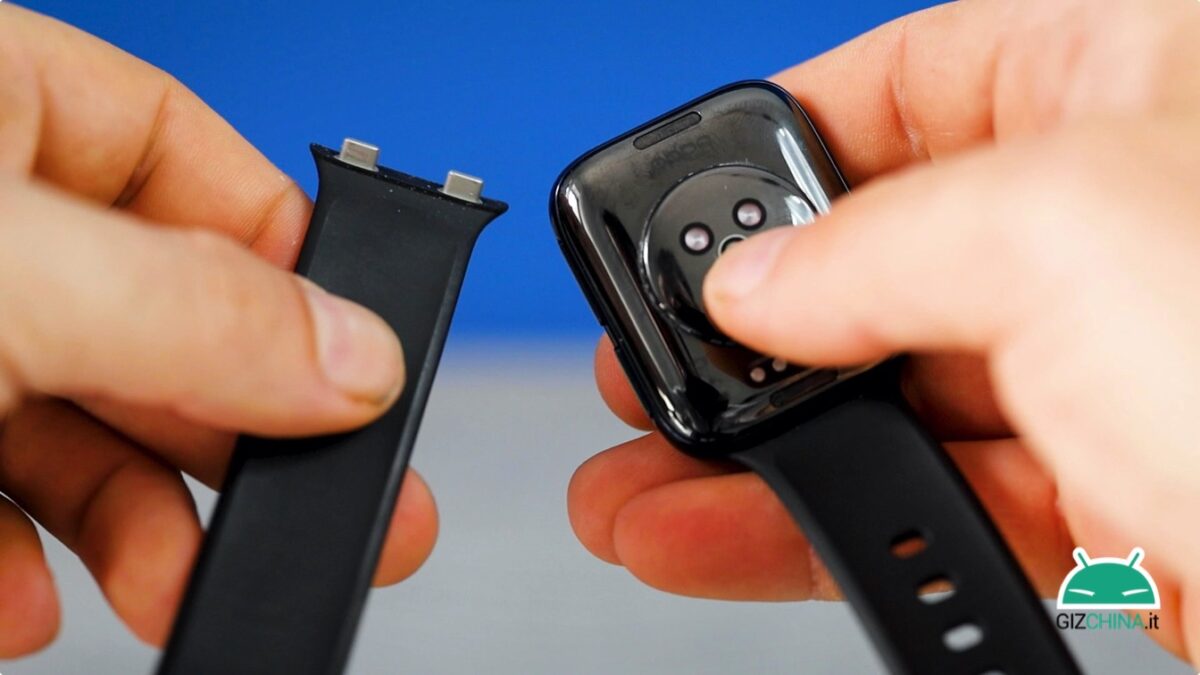 The build quality is worthy of any major rival, and the design is clean and extremely comfortable to hold on the wrist. However, I am perplexed by Oppo's choice to use gods magnetic straps with proprietary attachment which, among other things, in the vicinity of the coupling are quite rigid and which will be very difficult to find compatible. 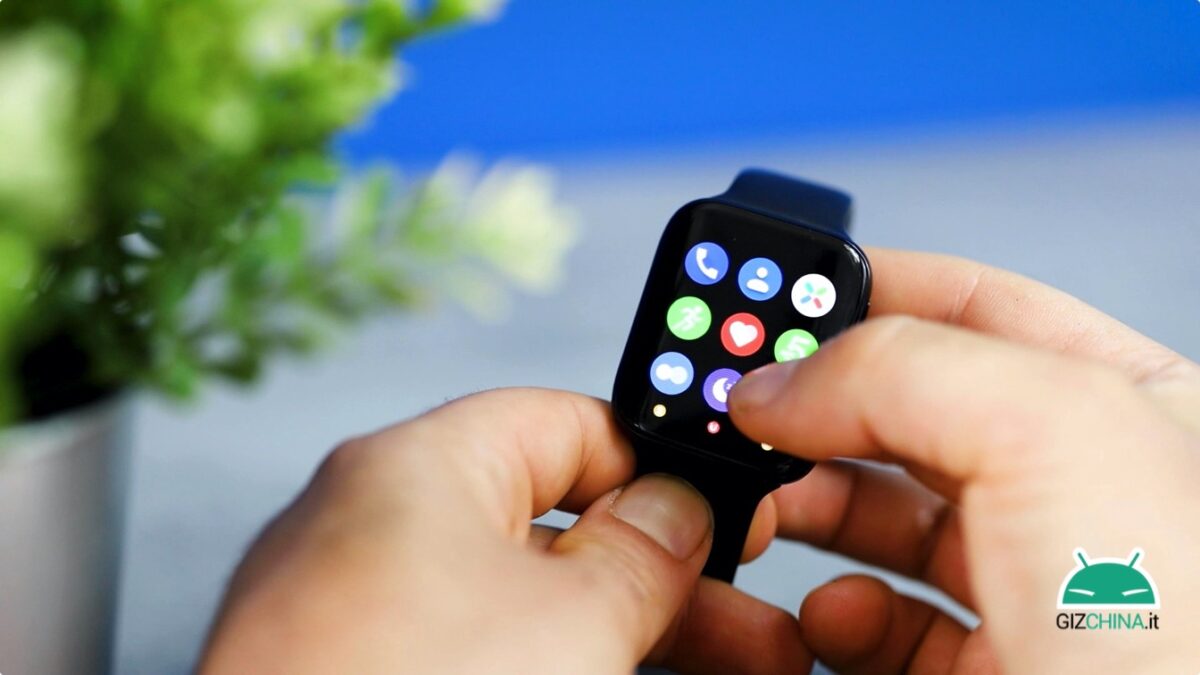 However, the real distinguishing feature ofOppo watch and the AMOLED display, which is extremely bright and perfectly visible even in direct light conditions, on which it is possible to browse the icons of the applications installed without any problem and which I also appreciated for the curvature of the two side edges. A brightness sensor, able to change the value according to the outside light with good accuracy.

Despite theOppo watch you do not use the latest Snapdragon 4100, the work done by the company in terms of performance optimization is very good. To animate the WearOS smartwatch there is a Qualcomm Snapdragon Wear 3100, flanked by 1 GB of RAM memory and 8 GB of internal memory, on which you can install applications or save music. It is a resistant smartwatch up to 5 atmospheres in the 46 mm version, and 3 atmospheres in the 41 mm version (do not ask me why this difference: I have not the faintest idea), and in terms of performance I must say that we are there: except in a first initial phase startup, I've never experienced slowdowns or micro-lag whatsoever, which it's almost a miracle knowing the Google operating system. 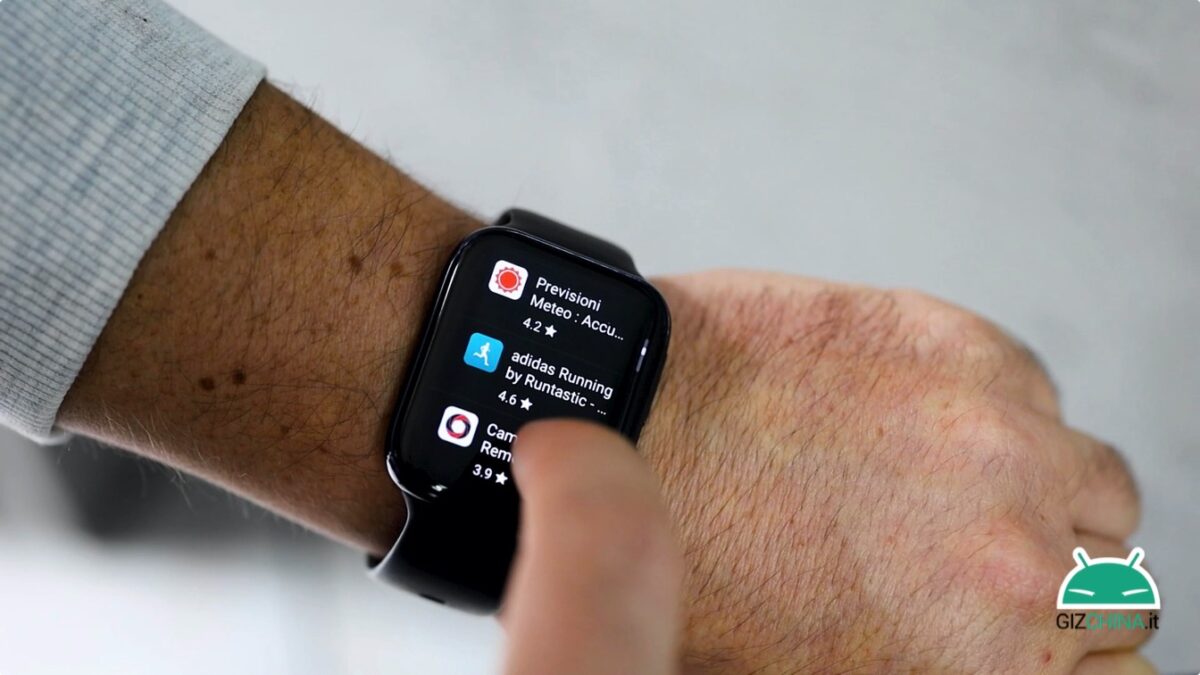 Just the GB of RAM is sufficient, and excellent integration of GPS and NFC, which also allow it to be used for sports sessions without a smartphone, or for contactless payments with Google Pay. In short, in terms of performance, those of Oppo have done a great job.

Nell 'Oppo watch, WearOS it is customized by an interface studied and designed by the company, which includes a series of additional options that are excellent for those approaching this world for the first time, but perhaps a little short of advanced features.

I quadrants, however, are numerous and interactive: I love for example the one with bubbles, which you can pop with a tap on the screen. And yes, it's useless, but it's a good stress reliever.

Then there are all the WearOS pros, such as the tab-shaped widgets, but also the ability to read and respond to notifications you receive. You can use preset answers, or write them using the on-screen keyboard or voice dictation. You can also respond with emojis, which you can also draw by hand: in a few moments the system will recognize the drawing and display the most relevant options.

Assuming that WearOS is more of a smartwatch OS than a sportwatch, thanks to the integration with Google Fit l'Oppo watch it is able to detect a large number of physical activities, and does so with good precision, which makes the only 5 types of activities that those of Oppo have decided to integrate independently, almost useless. Besides, it's a WearOS, which opens the door to so many third-party applications. 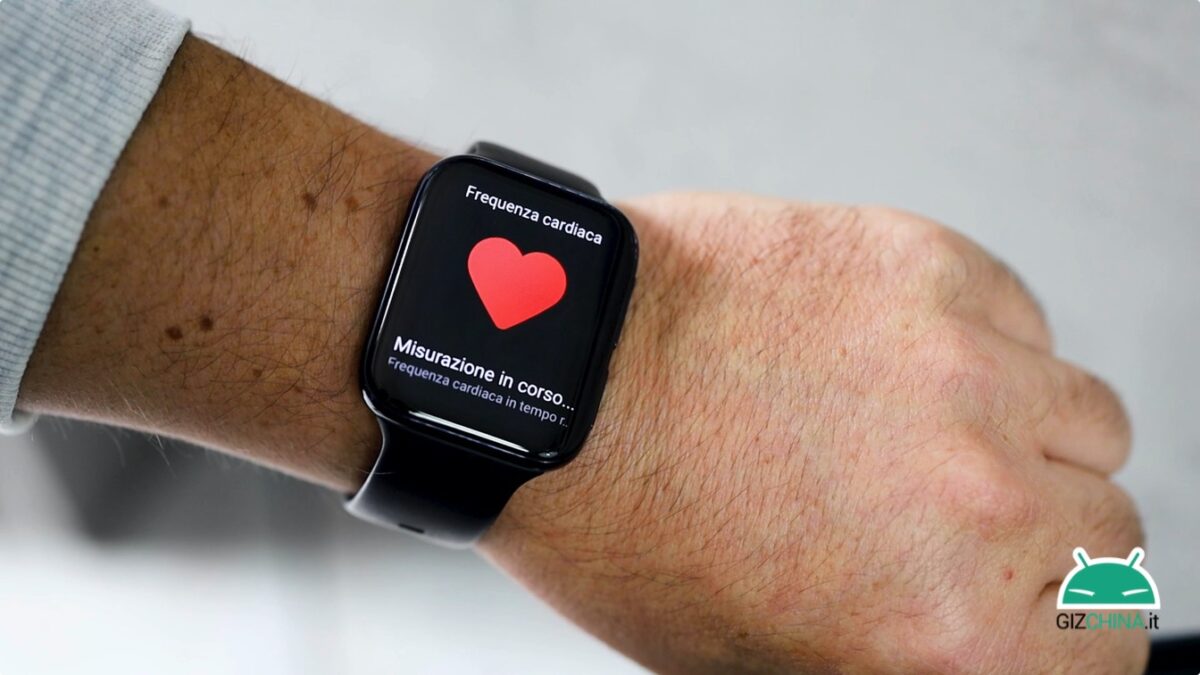 Anyway, the fix with the GPS is quick and fast e - just not to always say the same thing - I tried to compare the heart rate, sleep and steps tracking with the data captured by the Apple Watch, with pretty similar results.

But there is something rather strange: despite the excellent work done with the sleep detection (which is also automatic), in the sample I received from Oppo the detection was only possible between 20 in the evening and 10 in the morning. In short, according to the company (or according to Google) afternoon naps are not allowed.

I'll go straight to the point: the battery life of theOppo watch is slightly higher than what you might have with an Apple Watch Series 5: in these two weeks of testing (and with my type of use) I happened to disconnect it from the charger around 7 am, and have to recharge it around 11 the next day.

Which means it is one of the few WearOS that can actually be used for the sleep monitoring, as long as you disable thealways-on, which brings down the performance related to autonomy by a few hours. And, gentlemen, let's always remember that this is a WearOS, which makes the result more than good. 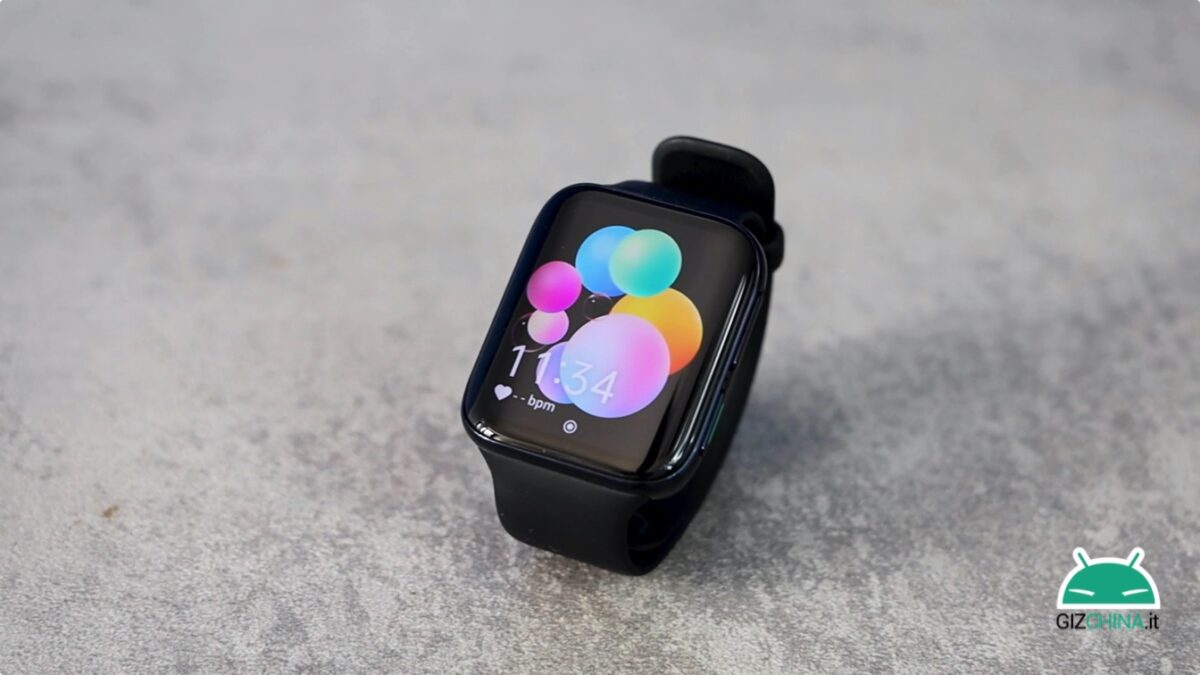 However, regardless of battery life, which is almost record-breaking for a WearOS, the recharge VOOC is one of the biggest innovations introduced by the Oppo Watch in the smartwatch market: in 15 minutes it will be possible to recharge the device by 50%. But this is an exceptional thing that is possible, of course, only with the supplied charger. Furthermore, among other things, the charging system is not induction but uses four pins.

The price ofOppo Watch from 46 mm is 299 euros, who come down to 249 € for the version of 41 mm. And that's probably the smartwatch I'd buy. And I wouldn't do it just for design and build quality, which I found excellent, but above all because theOppo watch is the first WearOS capable of meeting the three fundamental principles of a smartwatch: performance, design and battery life. 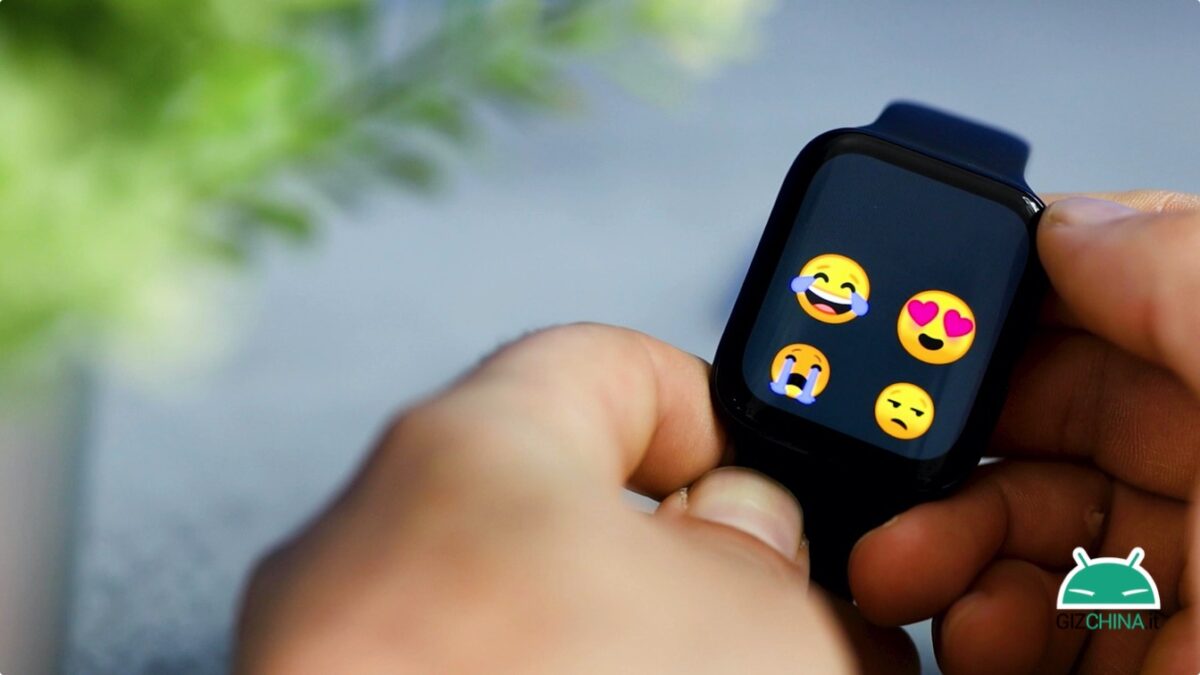 The screen is also of excellent quality, although perhaps it would have been preferable that those of Oppo had thought of some additional features, such as the detection of oxygen in the blood which, in the first WearOS of the company, has not been implemented despite being a strong trend in the sector.

Dental hygiene is worthwhile with discounts on Oclean toothbrushes