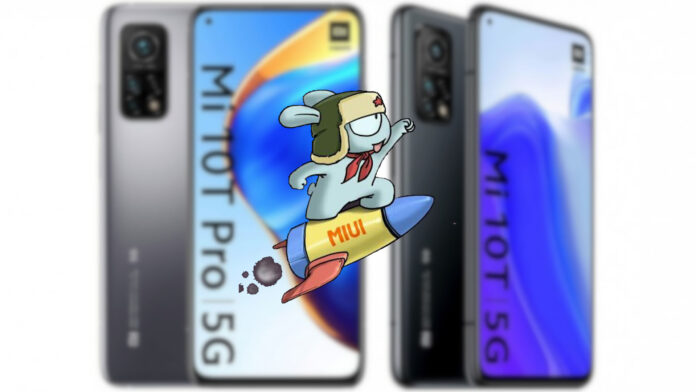 Apparently after the mighty Mi 10 Ultra Lei Jun's company isn't done with additions to its flagship series yet. The first leak images of Xiaomi Mi 10T Pro, a brand new smartphone that will arrive on the market Global together with the standard and Lite variants and which promises fire and flames: here are the first details on design, technical specifications and price.

23 / 09 Update: the Chinese company may have confirmed the processor on board Mi 10T. Find all the details in the “What to Expect from the Specs” section.

Before proceeding it is good to make a small recap: in the past few weeks we have been faced with a model with a code name Apollo, appeared on Geekbench with the acronym M2007J35G. The XDA team has identified this same acronym on various occasions, as well as the aforementioned Apollo code name: well it seems that the smartphone in question is precisely him, Xiaomi Mi 10T Pro, as can also be seen from the images that show the number model of the flagship.

The mysterious images of the device include various live shots and a render (you see it on the cover) and allow us to discover in whole the design of the presumed upcoming flagship for the international market. The back of the device would house a rectangular photographic module, with a main sensor from 108 MP. The shots of the front confirm the presence of a large display, with optimized frames and a punch hole in the upper left.

According to what reported, Xiaomi Mi 10T Pro would have a panel with a refresh rate on its side 144 Hz and a side fingerprint reader, a detail that suggests the presence of a display LCD. Two models should be provided, so this aspect could change in the transition from Mi 10T to the Pro model, but obviously this is only a hypothesis.

From the TechinDeep Twitter profile it seems that i first official renderings of Xiaomi MI 10T Pro. These images, therefore, confirm what had been the leaks of the past few weeks, showing once again the presence of a 108 MP rear quad-camera. Also according to this source, then, the price should be around 649 € and of 699 €. However, we have no further confirmation in this regard, so take this figure with a grain of salt.

After the first unofficial renderings dedicated to the device, what should be the alleged also leaks technical complete (or almost) of Xiaomi Mi 10T Pro. Below you will find all the details in a convenient list.

Obviously there are some details that make the nose turn up a bit. First, it is not clear why Xiaomi has decided to adopt it Snapdragon 865 rather than the new Plus variant. Furthermore - as previously mentioned - it seems that both versions are equipped with a "only" LCD display, albeit with a frequency of 144 Hz.

As regards the I 10T, this should have only the da configuration 6 GB of RAM (8 GB for the Pro model) and have a camera with a main sensor from 64 MP instead of 108 MP (reserved for the older brother).

Going back to the display of Xiaomi Mi 10T Pro, we have interesting rumors regarding the solution LCD a 144 Hz, which should be a panel with selfie camera punch-hole with a diameter of just 3.8 mm and that the manufacturer will be TCL. But that's not all, because the same display will have MEMC video frame support, as well as Mi 10 Ultra and other top range of the brand. Finally, for the chipset Snapdragon 865 the first benchmarks from GeekBench which reports 3275 points in Multi-Core and 901 in Single and a curious data on the RAM which brings back well 16 GB.

Obviously, being a leak by Digital Chat Station, however often you report what turns out to be reality, you have to take this information for Xiaomi Mi 10T Pro with pliers, waiting for official confirmation.

Even if everything is silent on the part of the company, the first ones begin to appear certifications. Below you will find the documents from FCC e TO, with some details about the aforementioned Pro model.

Based on what is shown, Xiaomi Mi 10T Pro will be launched with on board 8 GB of RAM and 128 / 256 GB of storage. The device appears with the abbreviations M2007J3SG e M2007J3SY and there is no lack of support for 5G, NFC, Bluetooth and Dual Band Wi-Fi. The presence of the BIS certification confirms that the device will also debut in India and that the launch is almost imminent.

Update 23/09 - Agatha Tang, Global Product PR Manager of the Chinese brand, posted a very interesting tweet, which you see above. In recent days Qualcomm presented the new 5G chipset Snapdragon 750G and the executive's post may indicate that this will be the solution aboard Xiaomi Mi 10T.

Touch and Escape on Amazon Spain

The renderings of the two new models of Xiaomi 10T. The configuration mentioned a month ago. The standard version is Snapdragon 865 + 64MP, and the price of 6 + 128GB is equivalent to RMB 4.4K. This configuration is considered cheap in overseas markets and should be able to .. (1/2)

Not even the time to release the first official renderings of the smartphone that the first placeholders of Xiaomi Mi 10T e Mi 10T Pro su Amazon Spain, as it happened for POCO X3. Unlike the mid range, however, these immediately disappeared from e-commerce, but the well-known leaker Digital Chat Station managed to take a screenshot of all the configurations of the next model in the range My 10, the prices of which would also appear, which would confirm the rumors above, generating many doubts. Doubts also targeted for the price of I 10T standard, which instead was placed at 547€.

Obviously, having been quickly removed from Amazon, we do not know in the least if it was an error of the same store or if these images are somehow fake, the fact is that the rumors for Mi 10T Pro e I 10T become more and more insistent and the new smartphone of Xiaomi it is already so tempting to many. 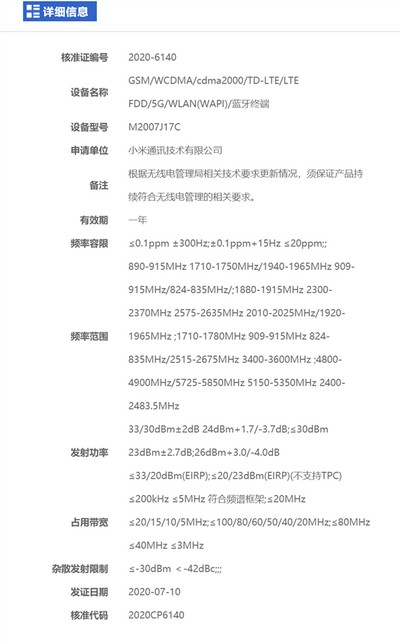 At the beginning of the month, Lei Jun's company has revealed that a new member of the Mi 10 family will arrive in Europe and Italy, equipped with the support al 5G and with a price under the € 300. Despite the announcement, nothing has yet been revealed, going to consolidate a hypothesis: the device in question will appear to be the new T family and will probably be the Xiaomi Mi 10T Lite. According to the latest rumors from China, the device should be the model M2007J17C, already certified at home. The smartphone arrives with the code name Gauguin and it should have a number of respectable characteristics on its side.

Apparently, the little one of the family will boast a main sensor from 108 MP, just like the Mi 10T and Mi 10T Pro models. The Chinese company has already confirmed that on board we will find a Snapdragon 7 series chipset (765G?) but at the moment the details are still hazy. Still according to the rumors of the Asian media, it seems that this Lite model will also arrive in China but with a different name. It could be next CC10 or even make it look like the family Redmi. In fact, remember that the T series is exclusive to the global market.

Other rumors begin to confirm the arrival of Xiaomi Mi 10T Lite. In fact, from the code strings, there are shooting commands coming from three smartphones bearing the same code name Gauguin but with China, Global and India declination. The first will actually have a main camera from 108 MP, while the other two will have one from 64 MP. This would justify the band of price where it should go to place. 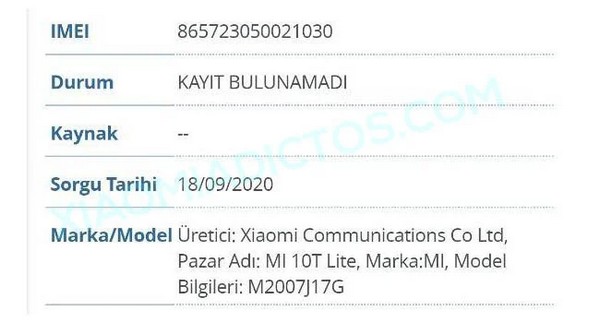 Furthermore, to cement everything, there is a further one certificazione for the mid range 5G Series I 10T, that of the institution FCCID which confirms the name with which it will arrive in version Global model M2007J17G. As for price and specifications of Xiaomi Mi 10T Lite, we look forward to further news and as soon as we know more we will update this article.

Always codenamed M2007J17G, the FCC certification reveals that Xiaomi Mi 10 Lite will be equipped with a 4.720 mAh. The specifications indicated also tell us about MIUI 12, 5G, Wi-Fi ac Dual Band, Bluetooth and NFC.

Xiaomi M2007J17G (Mi 10T Lite) appears on the FCC certification with MIUI 12 and a 4,720mAh battery
The device could very well launch in India, as it's battery model (BM4W) has already received the BIS certification and the IMEI number is also CEIR IMEI compliant.#Xiaomi #Mi10T pic.twitter.com/2FE3UDjbsE

Mi 10T Pro specifications leak, 108MP + 865 + 5000mAh, and more importantly, it uses a 144Hz adaptive refresh rate LCD screen. This is the first time we have seen it. The price is 699 Euros and it is very competitive. pic.twitter.com/aT7GvRI0bV

Among the indiscretions dedicated to Xiaomi Mi 10T Pro could not miss the Asian insider IceUniverse, with a really pretty good leak. It is one click stolen which shows part of the specifications of the sale price of the device: it seems to be a tag of those present in the We Store, but obviously it must be taken with pliers until an official confirmation (as usual!).

The image once again states that the flagship will have the chipset on its side Snapdragon 865 while the display will be a unit with refresh rate a 144 Hz (with technology AdaptiveSync). The main camera is a 108 MP while the battery has a capacity of 5.000 mAh. The selling price? The photo shows the figure of 699€.

But it takes very little to change the cards on the table and here is a new taste leak anticipates what should be the price of sale of Xiaomi Mi 10T e Mi 10T Pro. According to an insider from Germany, the base model will be launched at 499€ while the Pro version will come to 599€. It is much more attractive figures compared to the € 699 of previous rumors which certainly make these two models very interesting. As for the little one Mi 10T Lite, this should come to 329€; to conclude, those who aim for the stars will be able to buy the Mi 10T Pro from 8/256 GB a 649€. Obviously, all the figures are to be taken as a simple leak, at least until confirmed by Xiaomi.

You won't believe your eyes.
We invite you to discover the new Mi 10T Family live with us on September 30th starting at 14pm.
In the meantime, let us know your expectations in the comments!# Mi10TFamily #PowerYourCreativity pic.twitter.com/tGzlUO8Abi

Meanwhile the company has officially confirmed the date of presentation of the Mi 10T series: the appointment is set for September 30th and if you want to follow the event in live streaming with us, here you find all the details.