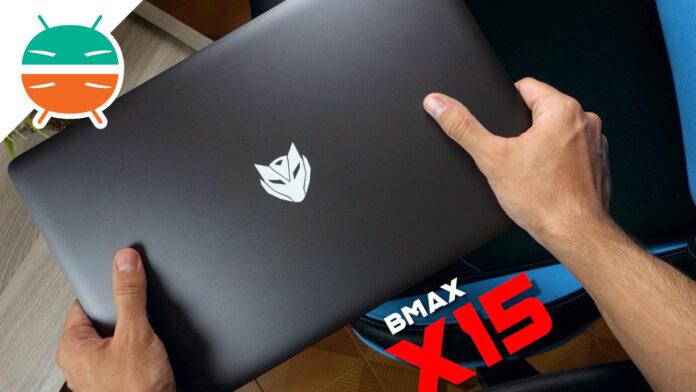 This is not the first time we have talked to you about a notebook economic, especially of this company. For some time now, in fact, we have begun to try out different BMAX devices, all with an at least interesting quality-price ratio. Therefore, this new one should not be outdone BMAX X15 which, in several respects, bodes well. I don't want to tell you anything, though, so keep reading Full review to find out everything about this laptop.

As always, the recycled cardboard sales package is really special, showing the brand logo on the front. Beyond this, however, inside we find few accessories, including:

Taking a closer look at the product, we notice the presence of two particular materials: the part that houses the display is made entirely of aluminum, while the remaining surface of the product is in plastic. It is a very special choice that I honestly did not understand. In fact, I would have preferred aluminum to be used internally, where the keyboard is located. Beyond this aspect, however, we are faced with a device that seems to be well assembled, without showing particular creaks. 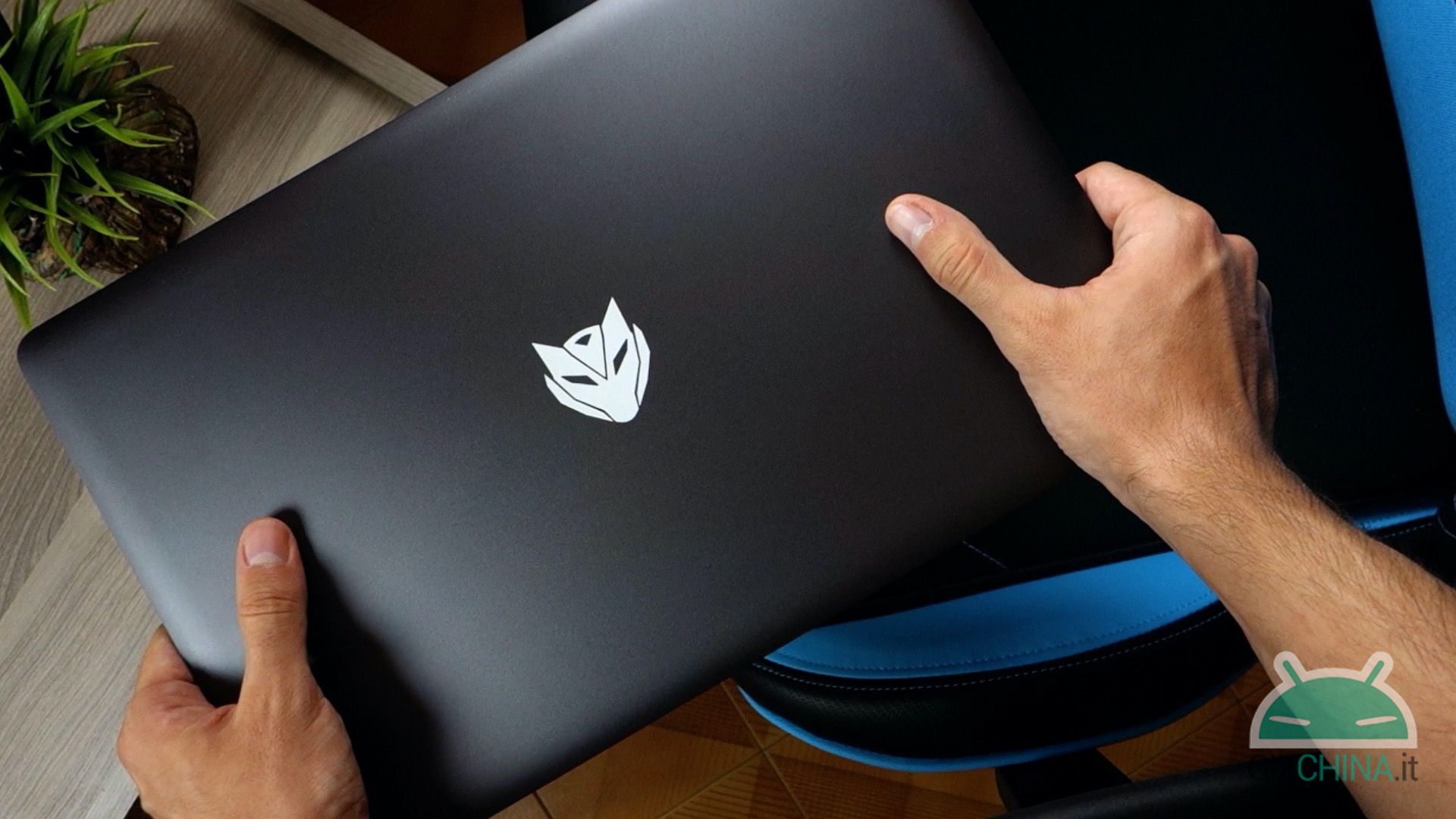 In terms of dimensions this notebook measures 375x243x20mm, With a weight of 2 Kg. It is certainly not one of the leanest products, therefore, especially if used often on the move. Despite this, this BMAX X15 is solid, also characterized by the presence of several input / output ports. Looking at the left frame, in fact, we notice the presence of an entrance USB 3.0, the hole for the power cable and a door Mini HDMI. On the opposite side, however, another door finds space USB 3.0, audio jack 3,5 mm and the compartment for microSD. 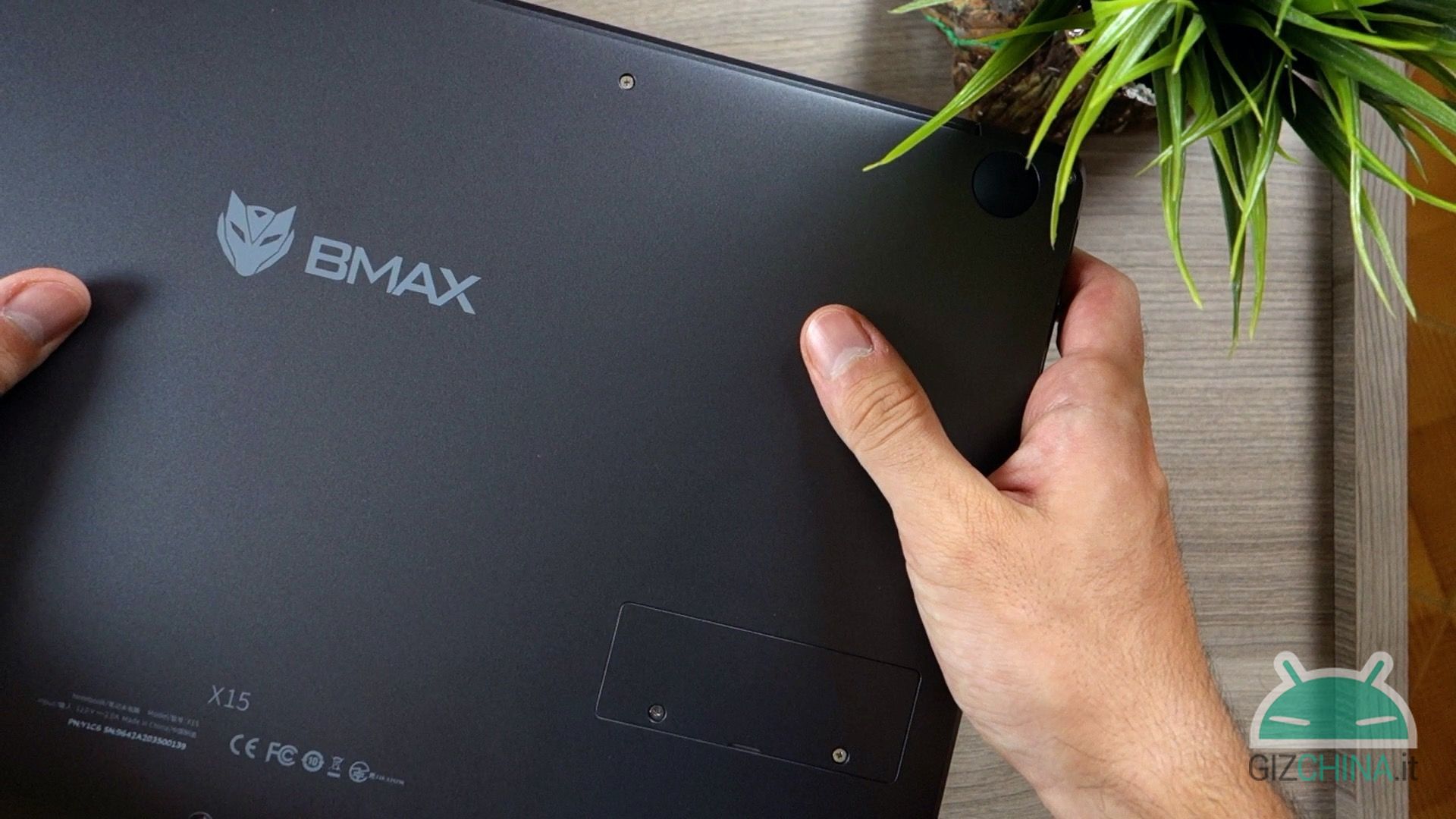 The entire bottom surface is almost completely free, except for the 4 rubber pads to hold the notebook in a fixed position and the compartment for inserting a Additional SSD. Then there are a whole series of visible screws which, once unscrewed, allow direct access to the heart of the notebook. I still want to point out, then, the presence of front frames, those around the display, quite marked, which at the top house a webcam da 0,3MP.

I think it is right to be able to deal with the analysis of these two components separately, keyboard e trackpad. Taking a look at the first of these two, therefore, the extension of this part seems immediately evident which, in fact, ends up almost flush with the side body. On the right, in fact, we also have a handy numeric keypad which, in several cases, can be very useful. I have to say, though, that I didn't have a great time with the stroke of these da keys 3 mm, in my opinion too broad for such a product. On a notebook, in fact, I always prefer a rather short stroke, which allows me to write much faster. Beyond this aspect, however, their size is considerable, resulting quite large and well spaced from the others. The Italian layout is not present (here we find the US layout) but, to solve this problem, just buy practical stickers to glue on the existing keys, thus arranging accented letters. I would like to point out, then, that there is no type of key backlight. 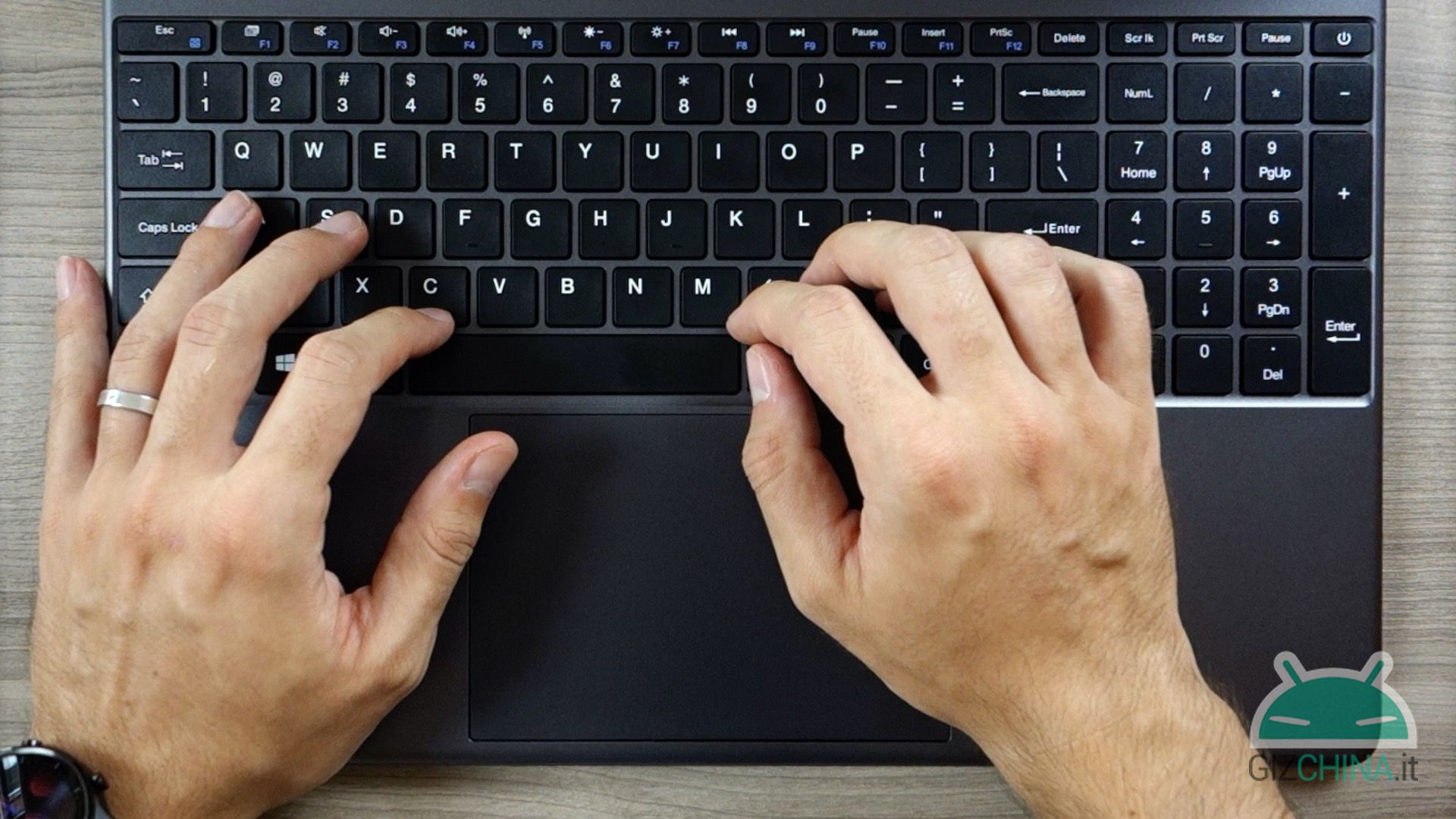 Sore point of this laptop is the trackpad. Inside the official site they talk about it well, because it still has compatibility with all the various gesture from Microsoft. What did not convince me, however, is the sensitivity of this component, which has proved to be rather poor. Although the surface is very large, this has not been assembled very well by the company, since along the sides in some points it protrudes from the profile of the body. I believe that if this part had been taken care of as well, the general experience would have benefited, and not poco. 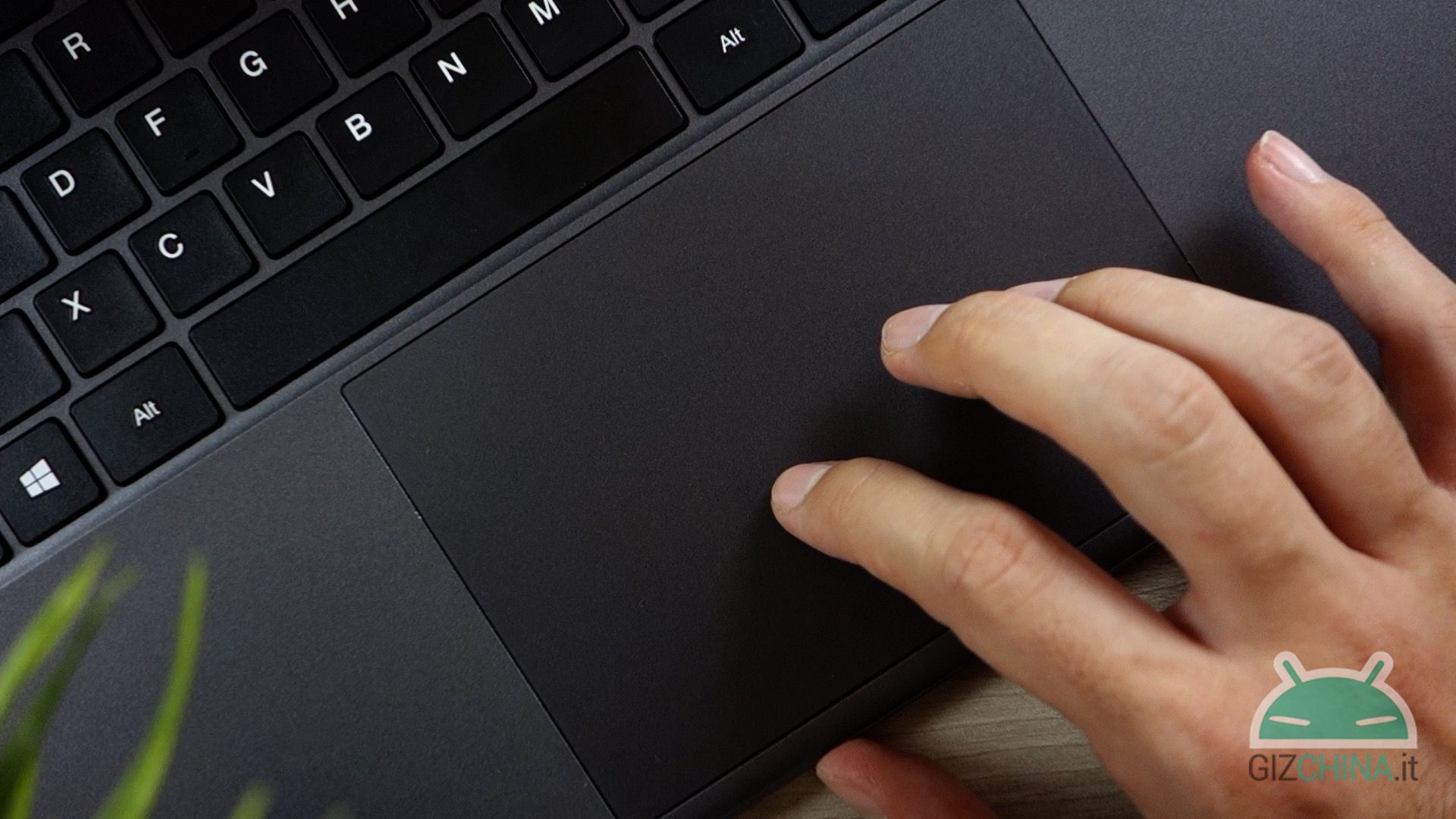 On board this device there is a da 15,6 " of matrix IPS and with resolution FHD (1.920 x 1.080 pixels), with form factor in 16:9. It is not a brilliant unit in terms of colors but, in general, it can be considered quite satisfied. As mentioned above, then, the screen is quite large but the surface that contains it has not been reduced to a minimum. So it is possible to notice the presence of rather pronounced side bands which, from a certain point of view, make it appear as an older product than it really is. 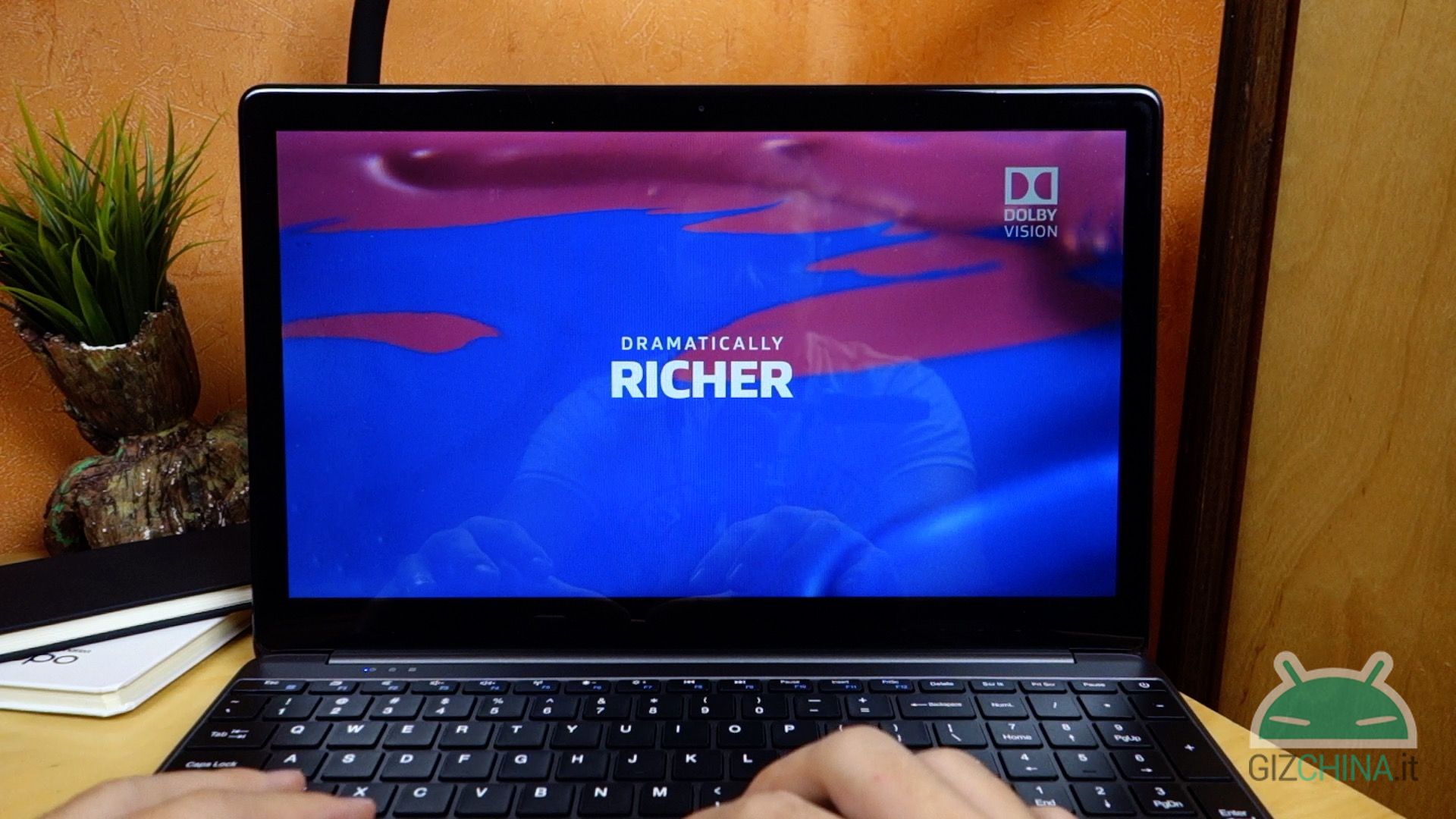 Some settings related to panel calibration can however be changed. Looking at the display for several hours a day, even during working hours, I did not experience any particular problems of eyestrain, at least in indoor environments. In fact, under direct sunlight, visibility is significantly reduced and a display of this type, with the glossy glass, it doesn't help at all. However, it is not a touchscreen panel, so there will be no fingerprints to obstruct its vision.

With regard to the hinge supporting this part, I must say that it turned out to be quite solid. In the event that it suffers, however, jolts a little stronger than normal, it tends to descend suddenly, not maintaining the position. You will not be able to go further, however, about 120 ° of angle.

On board this BMAX X15 there is space for a chipset Intel Celeron N4100, so a 14nm quad-core processor with a base clock frequency of 1.1 GHz and turbo boost up to 2.4 GHz. As I often reproach products similar to this one, this is a not too recent solution and which inevitably affects performance. Just to make you understand better: this processor, a Gemini Lake of eighth generation, is now released in the third quarter of 2017. What saves in part the performance of this notebook is the LPDDR4 Dual Channel RAM (not expandable) from 8GB. Unlike other competing products, therefore, you can afford some more luxury, but nothing as striking as you might think. To complete this package, then, we find an integrated 128GB SSD, expandable through the SSD slot dedicated or through microSD.

As I often reiterate when I talk about products of this type, BMAX X15 manages to be a good university companion and nothing more. By this I mean that the performances returned are not of a high level, allowing us to exploit the entire Office package in a productive way and poco other. Also on the UAF YouTube-channel, Netflix, Amazon Prime Video e Spotify you will have no problems, being able to switch from one app to another without jamming. When you use the notebook more aggressively, however, for example by keeping several windows open on Chrome, the system will show the side. Everything will become more cumbersome and less fluid.

What surprised me particularly, positively, is the speed of the memories. From the benchmarks, in fact, we note how these are ultimately in line with those offered by the competition. Despite everything, then, the temperature they tend to reach slightly too high peaks, reaching 80 °, while maintaining an average of 67 °. In fact, I remind you that this is a fanless machine with a passive cooling system. Beyond these aspects, however, forget about using this product for gaming. Fortnite, and other more demanding titles, do not run at all, so it will be possible to have fun only with some more frivolous titles (Asphalt 9: Legends, for example, crashes on startup). I point out, however, that the graphics are delegated to a GPU Intel UHD Graphics 600 with a maximum clock frequency of 700MHz.

What do we find installed on this product? obviously Windows 10 Pro. I don't want to bore you, therefore, by telling you about a system that most of you are already familiar with. I can tell you, however, that specifically for this BMAX X15 everything works correctly, with constant updates and with all the typical functions of the product made by Microsoft.

Even on this laptop are present all the rights of Windows, being able to manage the system as on other similar products.

Taking a look at the connectivity sector, on this notebook we first find a module Wi-Fi 802.11a / b / g / n / ac Dual Band. This is very well divided, even in the usually most critical points of the house, always managing to guarantee a good internet connection. There is also the Bluetooth 5.0, as well as all those hardware components we talked about in the first paragraph.

On this notebook they were mounted 4 independent speakers which, in fact, are located right at the hinge. Under this component, in fact, we find a series of slits that always remain hidden from view, most of which are used to channel the internal air outwards. Beyond this, however, the quality is decent, even if the bass is almost entirely absent. You can also entertain yourself with different TV series on Netflix or a movie.

Frontally, on the upper part, there is one space webcam 0,3MP which all in all, especially on Skype and Zoom, works well. This is obviously its main purpose, so it could also be useful to the guys in between poco they will go back to school and will perhaps have to participate in some lessons in streaming.

A battery is hidden under the body 10.000 mAh which, on average, performs quite well. I tell you that this BMAX X15 I have mainly used it to work on a daily basis, so I have always been connected to WordPress, for writing articles, and I have only slightly modified some photos for the covers. With this use, therefore, I have almost passed 5 hours of screen on continuously. By handling the product less, perhaps only with a few videos on YouTube, a few Word files, Netflix and a little gaming, you could also overcome this autonomy.

Thanks to the 12V / 2A wall power supply in the package, it will take about 3 hours to fully recharge.

BMAX X15 is currently sold on Amazon at the price of 299,99 €. This is a figure, perhaps, still too high for such a product, although it is still in line with the competition. On the market, in fact, Teclast F15 it is the one that comes closest to its characteristics and has, more or less, the same sales figure. Currently, therefore, it is not possible to find much better among the new products released on the market, even if it is still necessary to compromise.

Those who have no particular needs on the gaming and video editing side, will certainly have something to enjoy with a machine of this type, essentially devoted to office use and the multimedia side. Thanks to the wide diagonal of the display, in fact, it can be a valid ally for all those students who, on a limited budget, aspire to have a PC in their hands that can handle Word, Power Point and poco other.