The world of soundbars, as well as everything related to audio, is very complicated. Never as in this case, most people passionate about audio devices are competent, have well-trained ears and can understand when a speaker or, perhaps, a soundbar can guarantee a quality worthy of an audiophile. And the Sonos arc, the latest soundbar born by the American company is an example: it is one of the best exponents in the sector, and has received more than positive reviews and comments. But it costs a lot, and in this sector - you know - quality is paid for.

However, it is true that the world is not just made up of people who demand the highest quality and can afford a soundbar for almost 1000 euros. And it is mainly for meet the needs of those who do not have too many pretensions (and do not want to spend a whole salary), that companies like Xiaomi have started producing cheap soundbars able to guarantee a good value for money and the right audio performance. We saw it in the Xiaomi Mi TV Soundbar, - I assure you - we find it in the Redmi tv soundbar: a product born from rib of the Chinese company, which has debuted on YouPin last May, and which is one of the products that most amazed us in the last period. It is not a smart soundbar, it is not controlled via an app, in short, it is a very simple speaker that has several strong points: and it is not just the cheap price, now down below the 50 euro, but also the spatiality of the sound and the power of reproduction.

Xiaomi Redmi TV Soundbar review: for less than 50 euros it is impossible to expect better

The packaging of the Xiaomi Redmi TV Soundbar is essential and is characterized by dimensions that are of poco higher than the soundbar itself. And the content is also essential, because if in fact in the box there are all the accessories necessary to be able to use it immediately (including a support for fixing it to the wall), after opening the package I immediately felt the lack of some extra audio cables.

Here is the contents of the package:

Made entirely of plastic, with an aluminum protection grille, unlike the other cheap soundbars there Redmi tv soundbar definitely has some character. There is only one color available, which is black, and the design is essential: frontally and above there is practically nothing, i buttons for control they are positioned on the right side, while on the back there are the audio inputs (analogue and digital with SPDIF connector) and the power cable which is fixed.

Of course, it is a cheap product, and it has been felt since very low weight of 1.50 Kg, which, however, will make it much easier to fix it to the wall, through the holes positioned on the back and the screws that are included in the package. 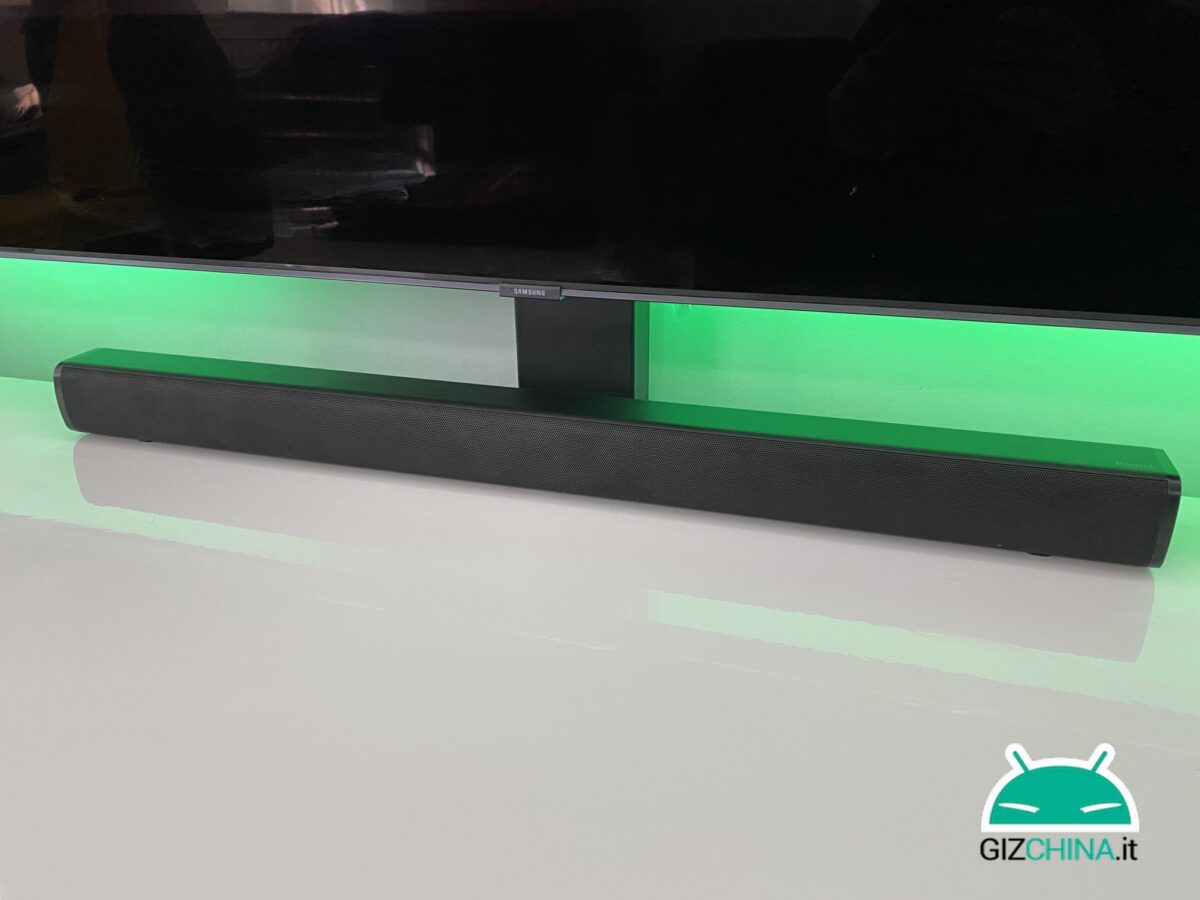 If you want to simply keep it resting, on the base there are rubber supports able to manage vibrations even at high volumes, but you will need to pay attention to the size: it is large 78.00 x 6.40 x 6.30 cm, which means that if you have a rather low TV, you may have trouble fitting it right under the TV.

La Xiaomi Redmi TV Soundbar it is also wireless. In addition to the entrances AUX e SPDIF, you can connect the soundbar wirelessly via the Bluetooth 5.0, which makes it practically universal: in addition to the smartphone, for example I connected it to my Mac using it as the main speaker, and the transmission lag turned out to be practically nil. 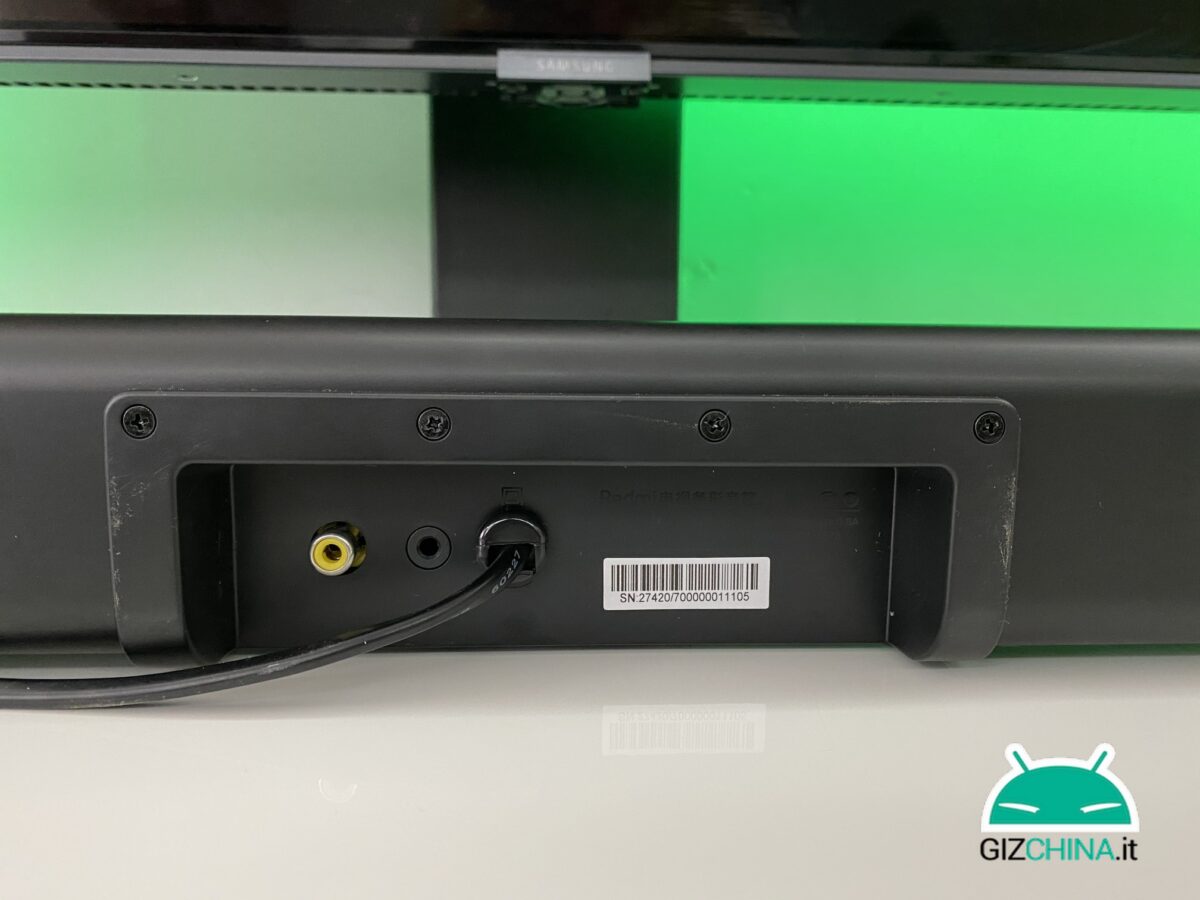 The sore point, however, is in the total absence of a remote control or an infrared receiver. This becomes difficult if you have to connect the soundbar to the TV using a digital optical cable (SPDIF). And the reason is simple: while with analog connections (i.e. via the AUX cable to be connected to the TV in the headphone output) you can control the playback volume via the television remote control, practically all TVs do not allow control of the volume of the digital optical output. In a nutshell, if this connection is used, the only possibility to control the volume will be given from the control buttons which integrates the soundbar. And this is one of the most uncomfortable things about this product, especially when mounted on the wall.

Under the hood they are present 2 speakers with a total power of 30W and two passive radiators, a rather essential compartment but able to guarantee a frequency range of 80Hz - 20000Hz and an impedance of 4Ω. But, technical data aside, the sound reproduced by the Redmi tv soundbar it is very good, especially if managed by the digital input, and guarantees optimal management of the sound spectrum, even at rather high volumes. Good lows and highs, but perhaps too strong the middle frequencies: it is a typical feature of these cheap products, which can (and must) be managed with a little equalization work. 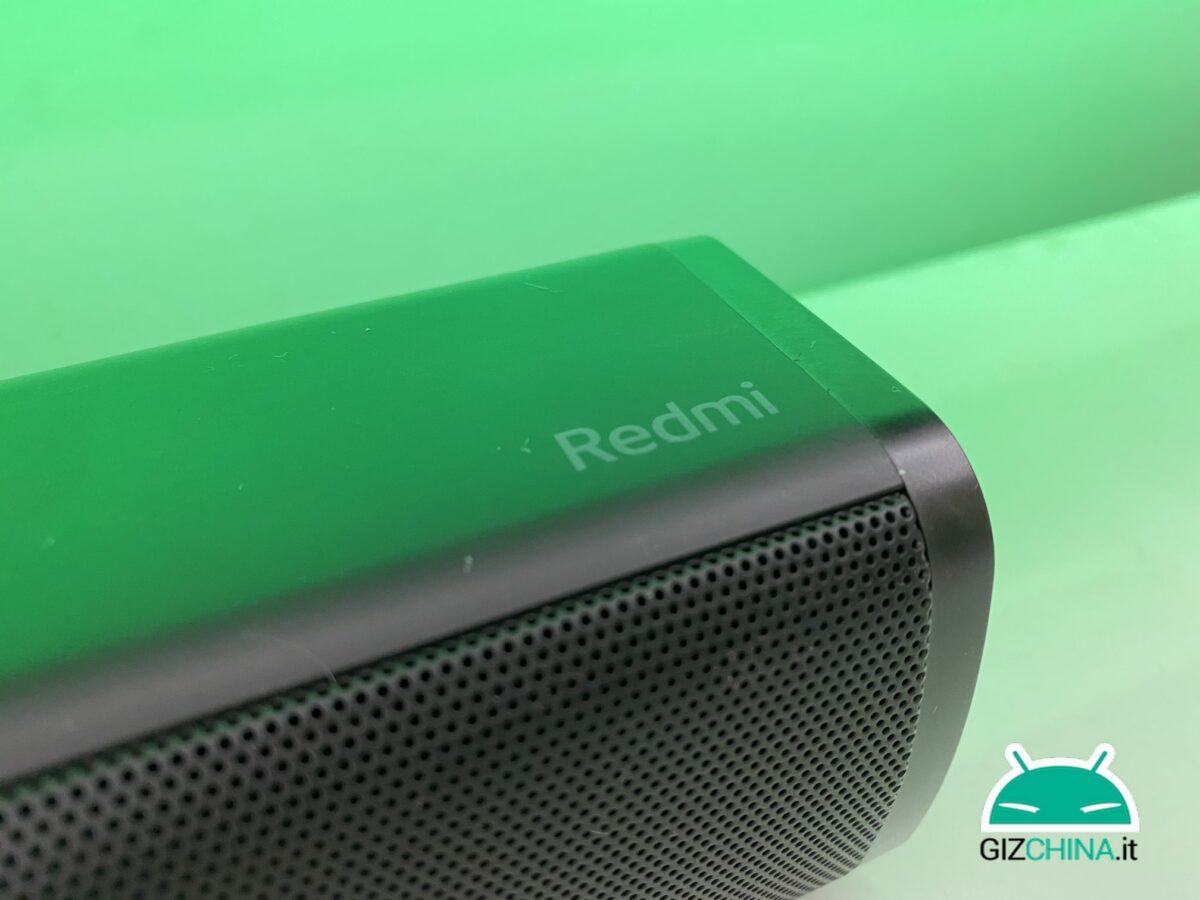 However, in the Xiaomi Redmi TV Soundbar one of the most annoying problems of the older sister produced by Xiaomi has been solved: in this budget soundbar the audio is much more spatial, and the stereo effect is 100% guaranteed. This is one of the things that most amazes when the soundbar is activated, because you would expect much less from a product in this price range. Instead, expectations are definitely exceeded.

Ad volumes higher the sonic fidelity begins to waver and, especially with songs that focus on low frequencies, you might start to hear some distortion, but you really have to go and find it. On the other hand, it is always a soundbar designed for and TV, and in relation to the price, the performances obtained with films or video games are more than sufficient. 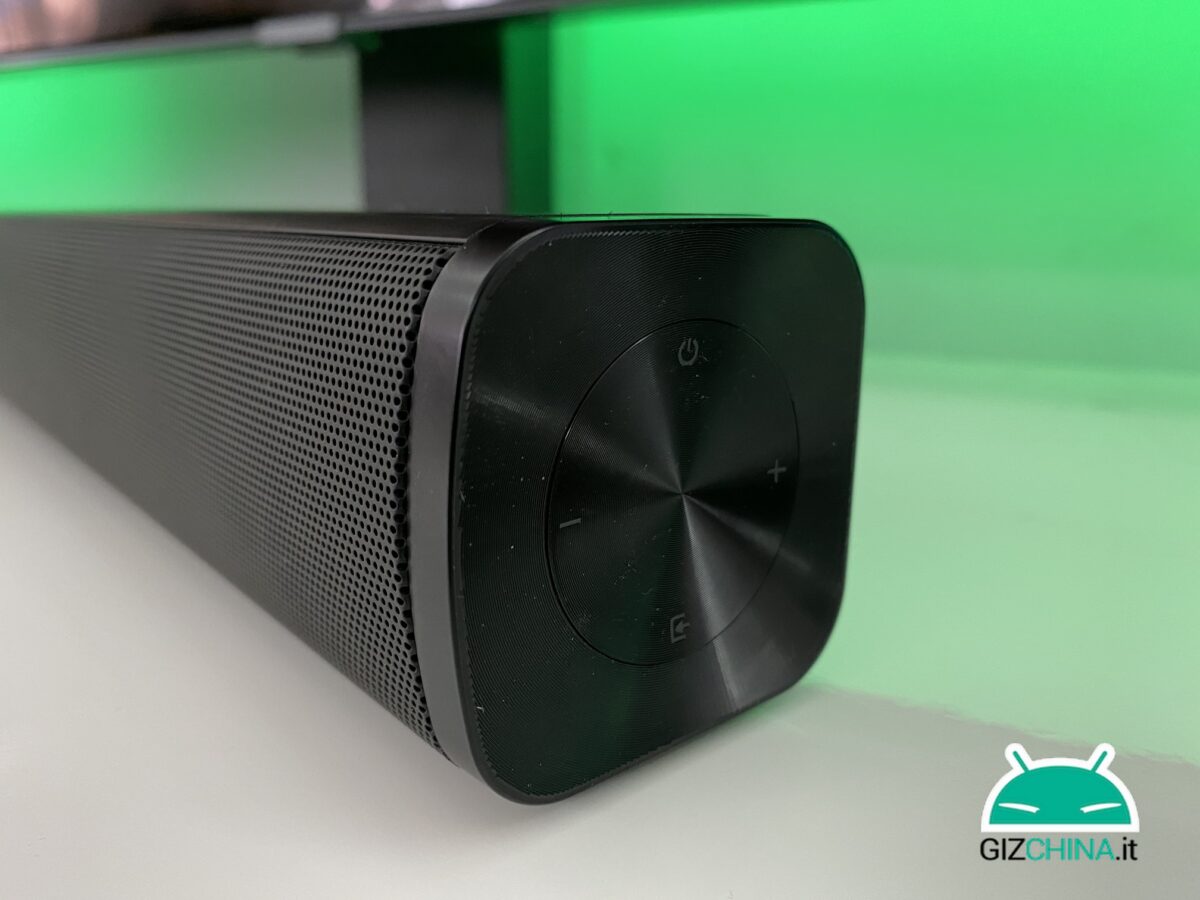 In short, considering that even the TVs for over 2000 euros integrate speakers all in all subdued, for poco less than 50 euros is virtually impossible to find a better soundbar, despite the compromises that the Redmi tv soundbar.

Compromises that also exist in Bluetooth connections: connections to multiple devices are not supported, nor the aptX codec. In short, the quality of the audio through Bluetotoh is in the norm, without shortcomings but also without significant features. 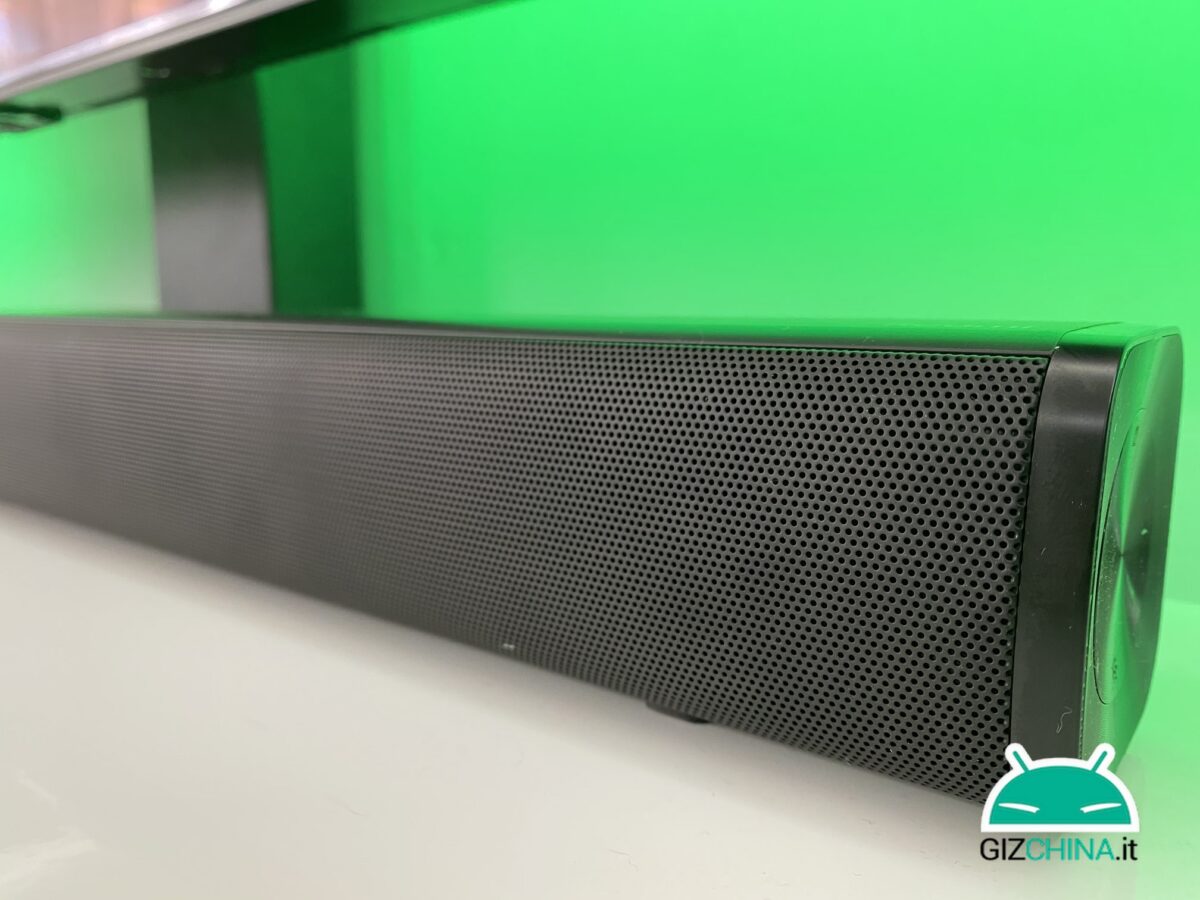 The price of the Xiaomi Redmi TV Soundbar is $ 75,99, but with our coupon (found below) you can buy it at 49,80 € with shipping from Europe, therefore without customs duties and with fast delivery.

And it goes without saying that, at this price, it is practically impossible find an economic soundbar with this sound quality, because we are talking about a powerful product, rather elegant and able to exalt in an exceptional and very spatial way the audio of the TV but also of video games.

Sure, it brings with it several trade-offs, such as the lack of a remote control, limited audio inputs and no equalization controls, but at this price and with this quality it is difficult not to appreciate its characteristics.

Buy the Redmi TV Soundbar at a discount with our coupon: shipping is from Europe, therefore without customs duties and with fast delivery!

Save with AliExpress coupons: here is the April discount coupon ...