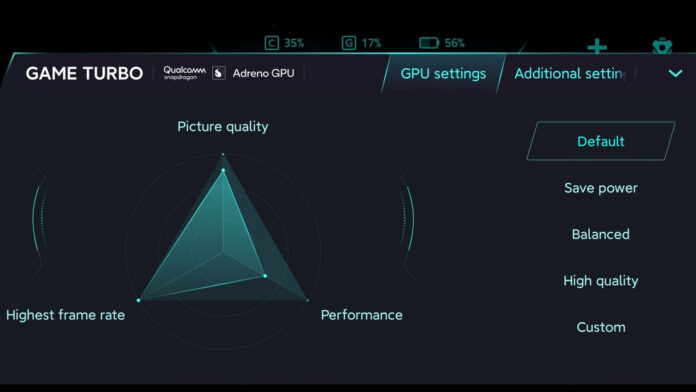 With the emergence of gaming smartphones - the last one was presented a few days ago, Red Magic 5S - manufacturers have begun to think about new features also dedicated to classic smartphones. Think of the various Game Modes or GPU Turbo of Huawei, solutions designed to improve the experience both from the point of view of games and for viewing in general (even with an eye on autonomy). Apparently Xiaomi e Qualcomm have plans to do things big with Game Turbo, a feature that promises fire and flames and that could debut on the next My 10 Ultra.

Upgrade 04 / 08: today we have further evidence on the news that Xiaomi and Qualcomm are working on. Find the new details at the end of the article.

Xiaomi and Qualcomm are working on Game Turbo, a mode that allows you to customize various aspects of the GPU

Before going further, it is good to make a premise: this news has been reported by the leaker Ice Universe, which refers to the Mi 10 Pro +, device we've heard about before. For the sake of precision, we point out that at present it is not known whether this will be the name of the next model coming, or if it will be called Mi 10 Ultra (or if it will be two different models); there are discordant rumors about it, but one thing is certain: a super flagship of the Mi 10 series is in the pipeline. The umpteenth confirmation comes from Ice Universe, which reveals the presence of the feature Game Turboaimed at improving GPU performance.

Super Leak ： Xiaomi Mi10 Pro + has a unique feature: Game Turbo, a mode developed by Xiaomi and Qualcomm's GPU team, which is unprecedented. You can use it to adjust GPU parameters and modes, including GPU frequency adjustment and so on. pic.twitter.com/Tu609T7Dy9

But what exactly is it? According to the images published by the leaker, the new mode developed by Xiaomi e Qualcomm would bring about a small revolution in the mobile sector. Indeed this allows you to change the GPU settings as if you were dealing with a PC, with the ability to tinker with anti-aliasing, the anisotropic filter and textures. Moreover Game Turbo it also allows you to edit GPU parameters, including frequency adjustment.

It is unclear whether these settings are dedicated to all games in general or only on certain titles (based on the support provided by the developers themselves). However, this is an advanced feature that will not fail to make fans happy. What do you think of Xiaomi's Game Turbo? Do you consider it a surplus or could it be useful to actually improve the gaming experience?

XDA member kacskrz has found explicit references within the System Service Plugin app of the latter MIUI 12 Beta 20.8.3. An analysis of the relative APK file was enough to find some strings of code that speak just about the Game Turbo functionality. However, there are no mentions of Qualcomm, therefore there is still no certainty that this feature can affect all Adreno GPUs or not.