The growth in Europe of Xiaomi and its ecosystem continues unstoppable. And even after getting on the podium and becoming the third largest smartphone manufacturer in the old continent, the Chinese giant continues not to focus only on the world of mobile devices and to push on an ecosystem of more varied products designed both at home and from many small startups of which he then sells and guarantees the devices.

The product we are talking about today, however, is designed by Xiaomi and is part of those devices that will surely increase the company's market share, thanks to a truly exceptional value for money: it is called I Curved Gaming Monitor 34, is clearly a display for PC and Mac, has a WQHD resolution, a 1500R curvature and a 144 Hz refreshrate.

In short, it is a monitor that also winks at video gamers, but which is also perfect for those who do not want to have anything to do with games. And it is especially for the price: it will officially arrive in Italy by September at 449 euros, but it is already possible to buy it on BanGood shipped from Europe (therefore without customs and with fast delivery) 372 to EUR (coupon below). And I don't want to spoil the review, but at this price nothing better can be found.

The packaging of the curved gaming monitor from Xiaomi it is the typical one of the company, made entirely of cardboard and without any color image. Its content is also, but it is definitely full of accessories. In addition to I Curved Gaming Monitor 34 real, there is a vertical stand that allows you to customize the height of the panel and the rotation on the vertical axis, a base to which the vertical bracket will be fixed (which, let's face it, is made of plastic and is perhaps the only one note "cheap" of the product), as well as the cables necessary for connection to the computer, the manuals and a series of screws that will be needed if you want to mount the monitor on a wall bracket: the I Curved Gaming Monitor it is compatible with the Vesa 100 standard.

The thing that leaves you speechless at first glance are the bezels on three of the 4 sides of the monitor, which are in size definitely reduced, the design is minimalist and clean, even if the lower frame is slightly thicker and made with a plastic material perhaps a little too light: in our sample, for example, in the lower right corner it does not adhere perfectly to the panel, which is nothing important, but they are construction details on which the company should work better.

Excellent, however, the system designed by Xiaomi for hide the cables: both the desk stand and the lower part of the monitor (the one near the entrances) have a magnetic cover inside which you can hide all the wires needed to use the monitor.

The inputs are 4, 2 DisplayPort e HDMI 2, and despite the Xiaomi gaming monitor does not have built-in speakers, integrates an input to which to connect the 3.5mm headphone jack. But unfortunately, it has no USB port, much less than a USB-C, which would have made the connection and charging of the computer much faster and more immediate. 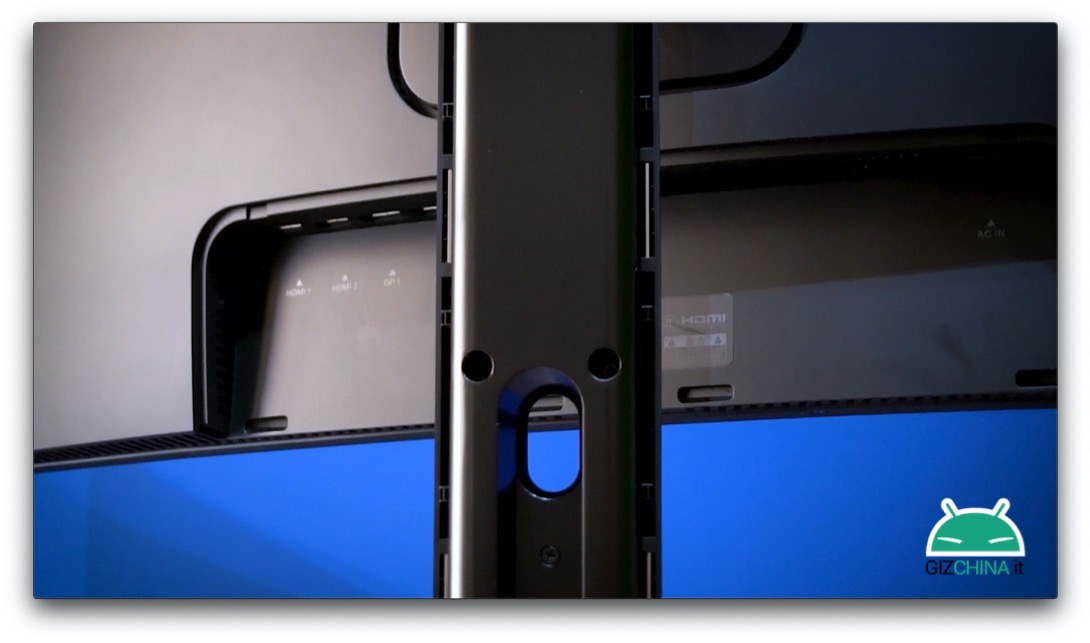 However, the lack of a pair of speakers makes itself felt, of course it is a gaming monitor and probably those who buy it to play will use headphones or a pair of high quality speakers, but for my use I would have preferred a pair of medium / low quality speakers, just for system sounds. So much so that, to solve the problem, I had to buy them separately (and paste with the double-sided tape on the back of the panel, so as not to always have them in front of the boxes). They are trifles, but it is precisely on these details that the Chinese company should focus, because otherwise it's a fantastic monitor.

The buttons to control the OSD they are positioned on the back, near the only status LED on the monitor, and menu management is simple and intuitive, also thanks to a sort of guide near the physical keys that will be used.

Just as the name suggests, the Xiaomi gaming monitor use a panel with a diagonal from 34 " format 21:9 and with a curvature 1500R. It is certainly not an extremely curved panel, but it is curved enough to guarantee an immersive and not tiring game (and work) experience. The actual panel is a VA made by Samsung, easily recognizable by the color rendering of the image, which it is able to reproduce 16,7 millions of colors, has a contrast ratio of 3000:1 and a prominent brightness that can go up to 300 nits: and, believe me, there are many especially in a not extremely illuminated environment. 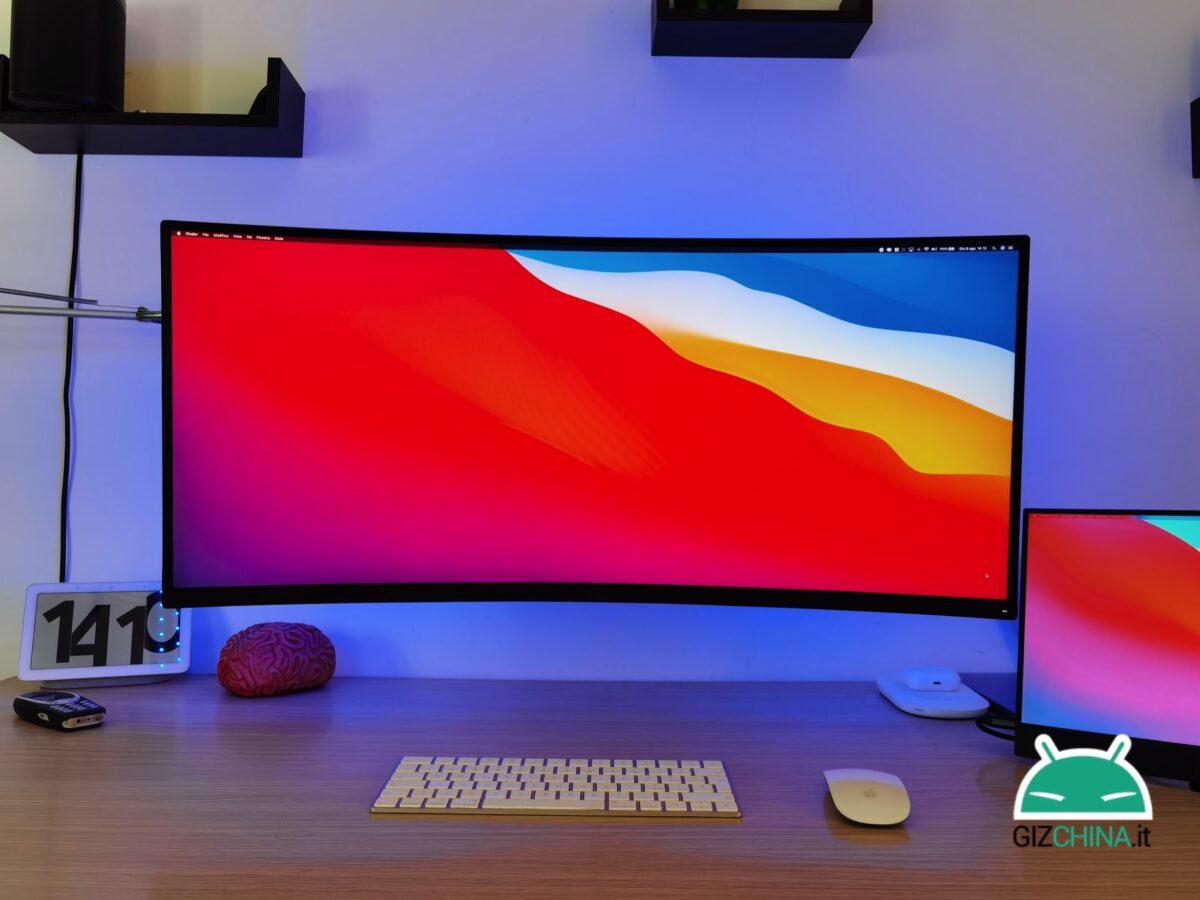 The refresh rate is 144 Hz with a response time of 4 ms, is compatible with technology AMD FreeSync and - at least according to the company - is able to cover 121% of the sRGB color gamut and 85% of the NTSC color gamut: data that, in our tests, turned out to be (almost) true.

Reviewing a monitor like this and telling your impressions is never easy. Because to be able to give a qualitative value to the panel it is necessary to carry out tests which, for many, in a review would perhaps be too technical and boring. The fact is, however, that we have performed the tests and not only can we tell you the results I'm more or less in line with what was declared by the company, but which in some cases also impressed us (especially considering the price and the gaming destination of the product).

And they did it starting from delta E, which has an average value of 1,65 and a maximum value of 2,84, which is pretty impressive for a monitor meant for gaming. The sRGB color coverage in our tests totaled a very round 100% and the contrast ratio always remained stable on an average of 1550: 1, which is a very good result. 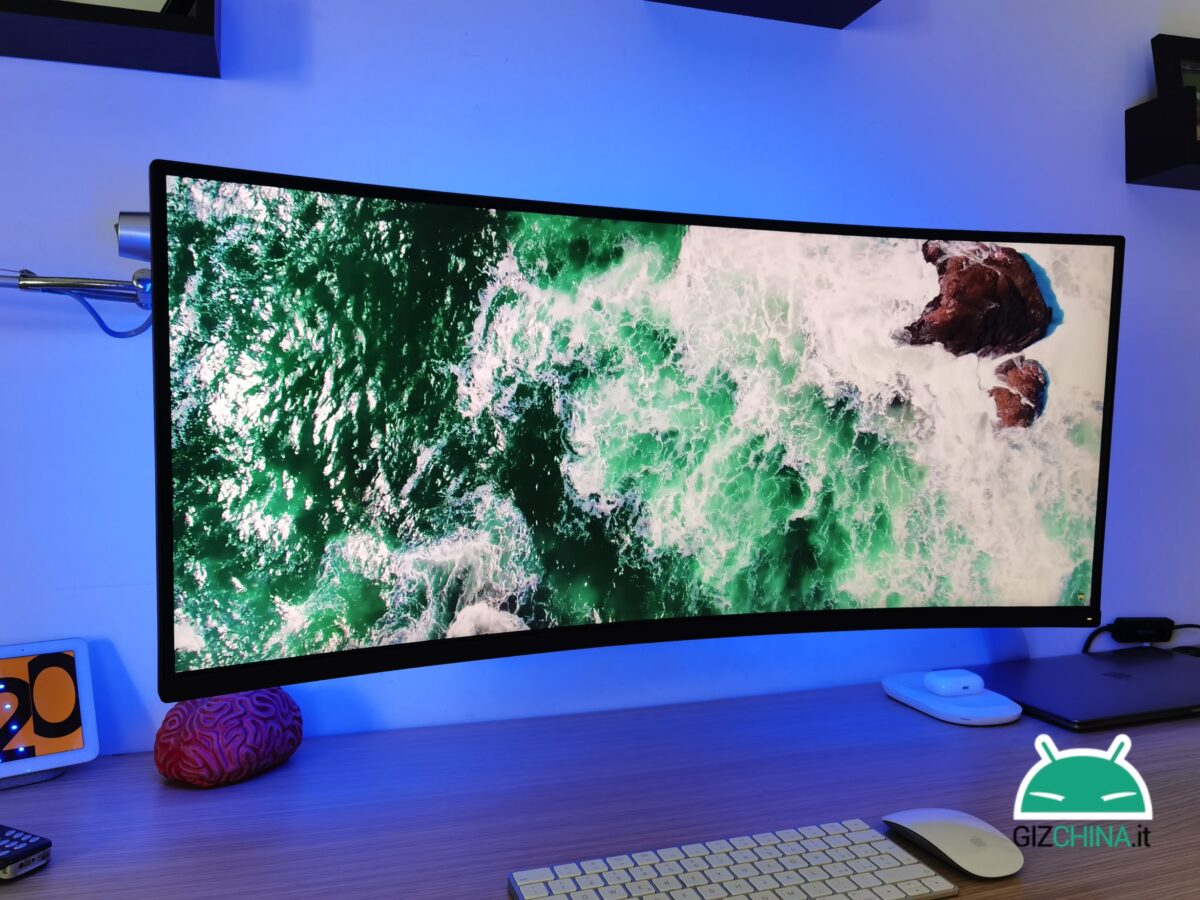 The brightness changes were also good, which resulted stable and uniform even during the adjustment phase, and even if it is certainly not a panel designed for ultra professional purposes, the backlighting and color uniformity are really excellent. The only drawback of this panel, it depends on its VA nature and concerns the viewing angles: To be able to fully enjoy the quality of the reproduced image, it is necessary to position yourself exactly in the center of the curvature, otherwise the image quality will not be the best.

Unfortunately, on my Mac, I was unable to use it to its full refresh rate potential, and I was forced to stop at 120 Hz, but the compatibility with 144 Hz and AMD FreeSync technology, makes the monitor that gaming spirit that makes it definitely suitable for even the most frenetic games.

In short, it is useless to play around with it and get too technical, the reality of the facts is that Xiaomi he did an excellent job with this monitor and, that the fans of the company do not want it, but the quality is so good that it is difficult to believe that it was produced by the Chinese giant and sold at such a low price. Well done.

In addition to working on the tangible quality of the screen, Xiaomi has also paid a lot of attention to the OSD menu that can be controlled with the side buttons in which, in addition to the image settings, it will also be possible to manage a series of advanced features designed essentially to improve multitasking and the gaming experience. Several image presets are included, the SBS and PiP multi-window mode, the response speed settings and a particular mode called LowBlue, designed to eliminate blue tones and prevent the eyes from getting tired. 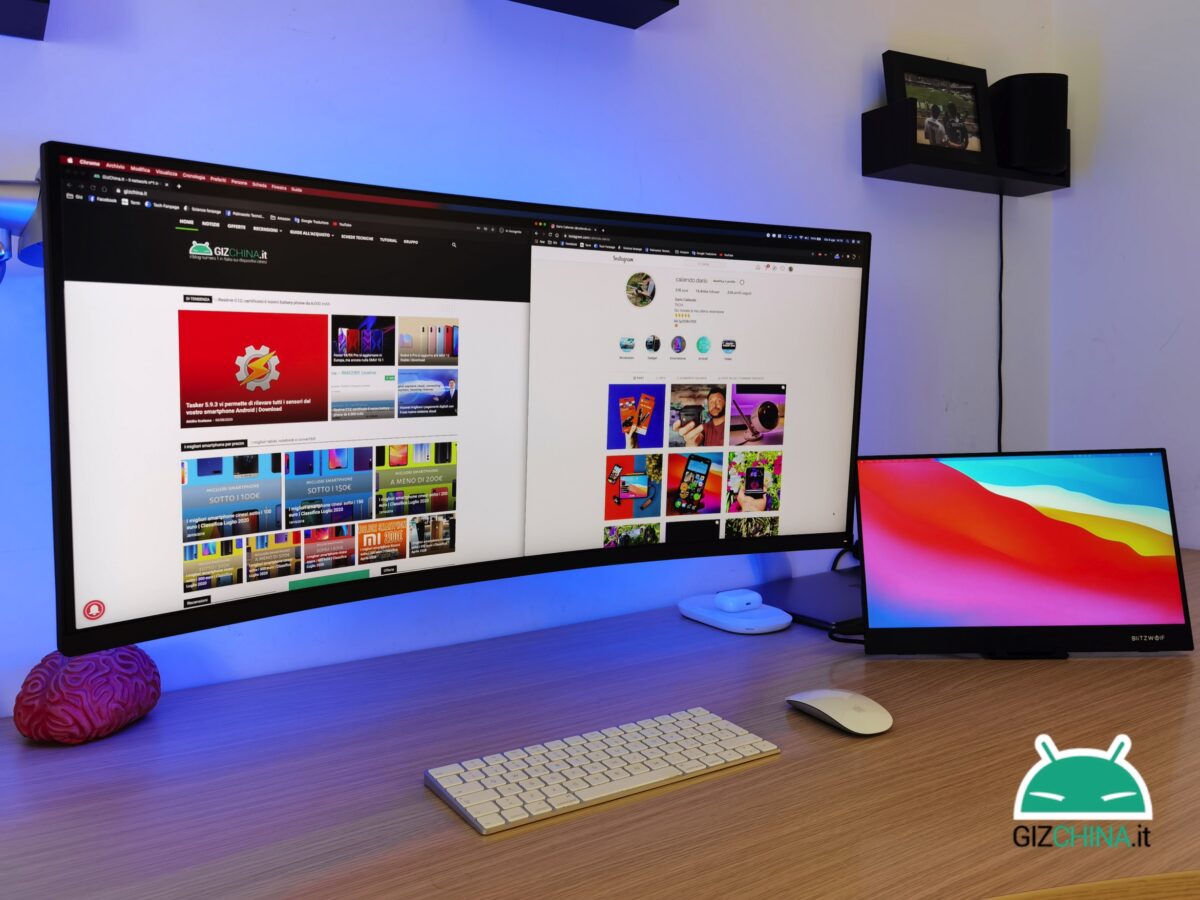 It is precisely with the menu that you can choose between different response time modes, in order to slightly solve the problem of Streaking (one of the disadvantages of VA panels), or select the sources of the multi-window mode: you can combine two DisplayPort ports, or two HDMI ports, or even a DisplayPort and an HDMI port, by choosing then also the sound source between the two. But if by connecting two computers and placing them side by side there is no aspect problem and the resolution will be adapted automatically, using a source with a fixed screen ratio (such as a decoder or a console) and placing it side by side in SbS, they will go to lose proportions of image, obtaining a result out of relation and not very nice to see.

The selling price in Italy of the Xiaomi Mi Gaming Curved Monitor 34 is 449,00 euros and the date of sale in the Bel Paese is expected by September 2020. In a nutshell, at the time of writing this review, Xiaomi's gaming monitor is not yet available in Italy. 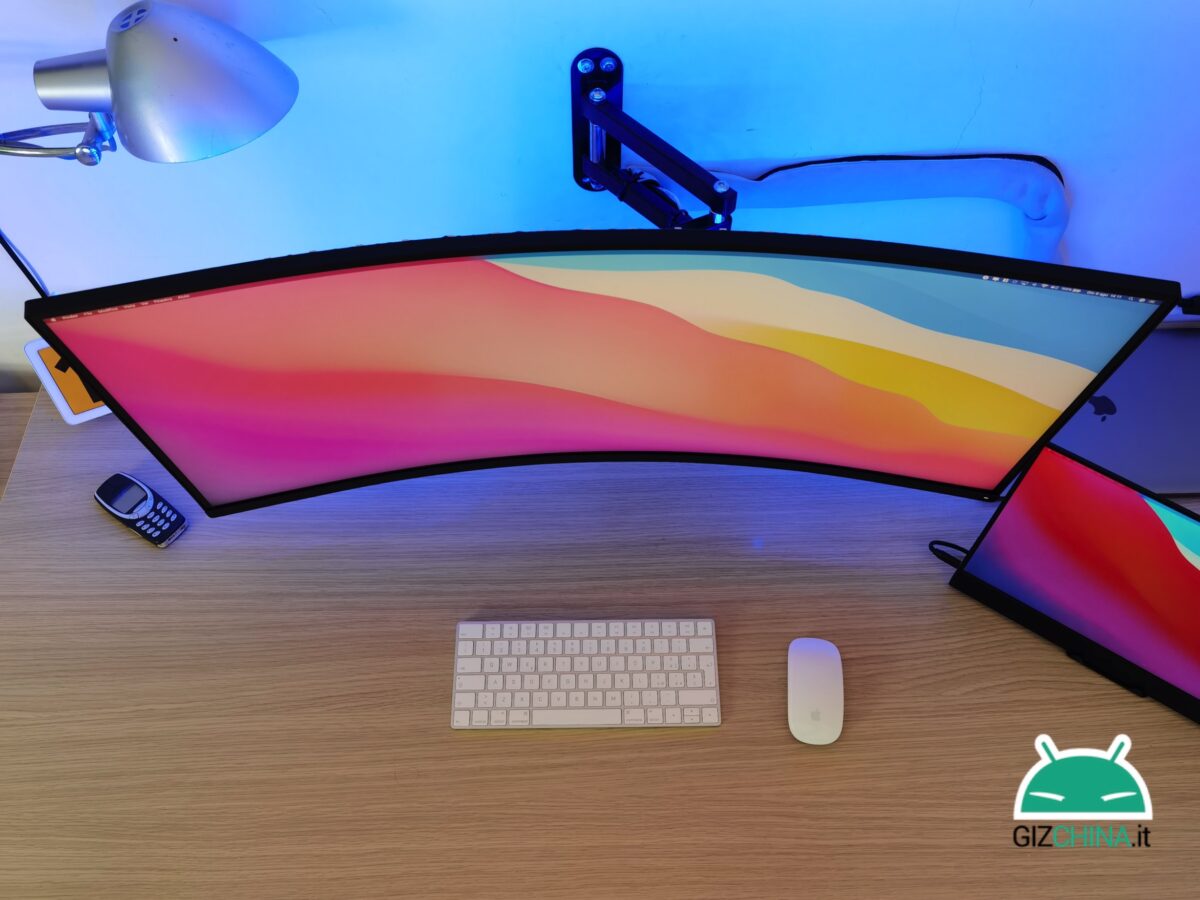 However, it is already possible to buy it on Bangood, at a much more competitive price and with shipping from Europe (therefore without customs and with fast delivery): to take this beast home with you, it will be necessary to pay 372 euros using the coupon BGGM0730 (find the link below). And, at this price, I assure you that you will not find anything with the characteristics of the Xiaomi Mi Gaming Curved Monitor 34.

As soon as Xiaomi presented the monitor in China, last October if I'm not mistaken, I immediately wondered what the real quality of the panel used was. And, I must admit, I started out with decidedly unjustified prejudices. I don't want Xiaomi, but once the display is turned on I found it hard to believe that it was a product of the Chinese company. 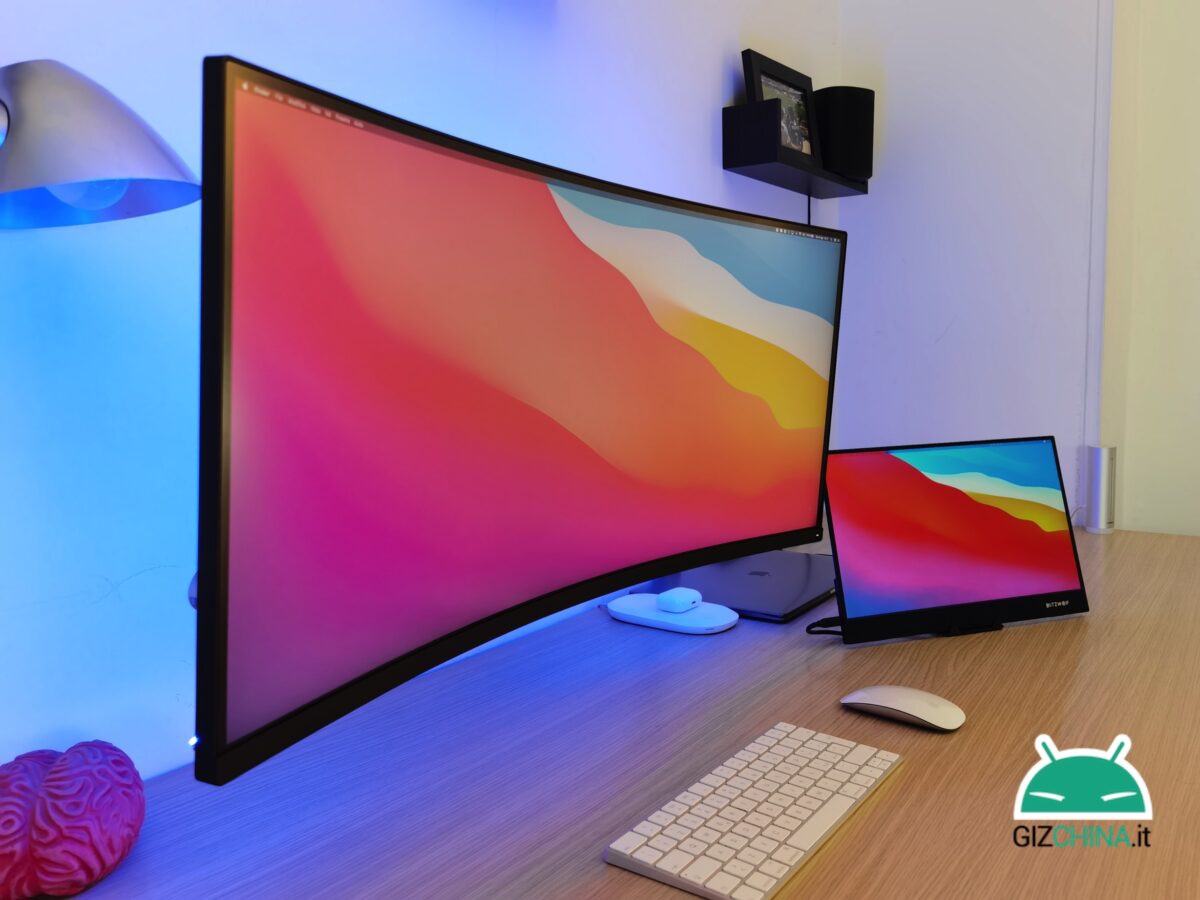 It has relatively high performance, excellent resolution, good brightness and off-scale (clearly positive) image quality for the price at which it is sold. Of course, the lack of a USB-C port and integrated speakers is felt, especially for those who do not want to use it exclusively for gaming, but there is no doubt that it Xiaomi Mi Gaming Curved Monitor 34 it will become the benchmark for its price range, because it is one of the best gaming monitors that you can buy for such small amounts.

Buy the Xiaomi Mi Curved Gaming Monitor 34 with shipping from Europe, without customs and with fast delivery.

Huawei Nova 8 Pro paparazzi live with a look that ...