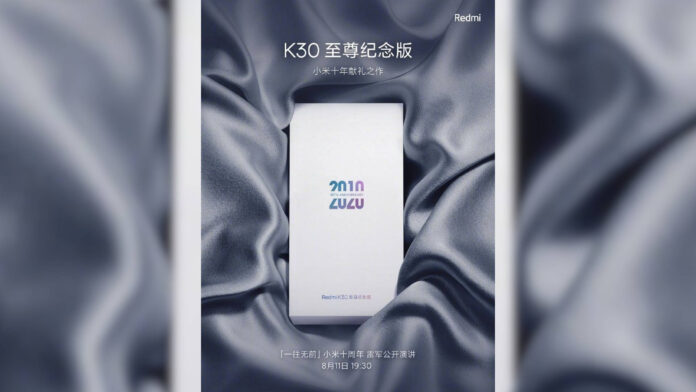 In the past few weeks, the first rumors about the Redmi K30 Ultra, arriving instead with the wording Extreme, enhanced version of the current top of the range of the Chinese brand. However, so far it has been nebulous information, with many clues and poco in fact. Things seem to take a completely different turn thanks to Tena, the Chinese certification body par excellence, which published the first images and some details about an unprecedented smartphone from the Xiaomi rib.

10 / 08 Update: after having revealed the name, price and date of presentation, the first rumors arrive on the display. Find all the details in the “Display” section.

In terms of design, the TENAA images speak clearly. We are facing a model of the Chinese brand characterized by a style very similar to that of the current top of the range. The device was confirmed by Lei Jun's company under the name of Redmi K30 Extreme Commemorative Edition, arriving in August for the tenth anniversary of the Chinese brand.

The back of the smartphone features a Quad Circular Camera, positioned in the center of the body; the Flash LED is positioned under the module while the logo of the Chinese brand is located at the bottom. Along the right edge, the power button and the volume rocker are clearly visible.

The call is missing fingerprint reader, perhaps inserted below the display. Speaking of the front panel, there is no notch or hole. Likely that the Redmi K30 Ultra will have - similar to the current K30 Pro - a pop-up form to host the selfie camera. According to Chinese media reports, an anonymous source would have revealed that Redmi K30 Ultra, as well as Xiaomi Mi 10 Ultra, would also be equipped with a screen AMOLED a 120 Hz.

A few days after the first images, the TENAA has finally published the more or less complete specifications of the smartphone. This has been certified by the Chinese body with the initials M2006J10C and it is highly likely that it is Redmi K30 Extreme. Below you will find all the specifications published by TENAA.

According to rumors collected so far, the smartphone should be moved by the SoC MediaTek Dimensity 1000+ and have a panel with Full HD + resolution and refresh rate a 144 Hz. The code name of the device is Cezanne while the 3C certification mentions the presence of the 33W fast charge. In the meantime, an image has started circulating on the net that offers yet another specification overview device, with confirmations on the details coming from TENAA and some additions.

Basically the leak is a simple recap of what has been seen thanks to the Chinese certification body, adding details such as the presence of the refresh rate to 120 Hz, the battery from 4.500 mAh with recharge from 33W and the chipset Dimension 1000+. To all this is added a practically unchanged design compared to the classic K30, complete with pop-up room. As usual, the whole thing is not to be taken as a confirmation until the arrival of official details. 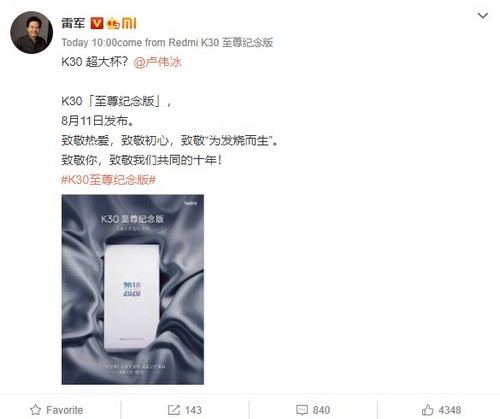 Regarding the debut of Redmi K30 Extreme, Xiaomi has officially confirmed the name of its new flagship and the release date. Xiaomi Mi 10 Extreme Commemorative Edition the next one will be launched 11th August and a second teaser poster published by the company (you can see it at the top and on the cover) also confirmed the existence of Redmi K30 Extreme Commemorative Edition, arriving on the same day. In short, the name of the model known so far as Ultra will be Extreme, similar to Xiaomi's cousin, and will celebrate the tenth anniversary of the Chinese company.

In addition to the release date, here are also the first rumors about the price of sale of Redmi K30 Extreme. According to what reported by an Indian leaker, it seems that the device will start from the modest figure of 2.999 yuan (364€), then rose to around 2.799 and 3.499 yuan (approx 339 / 424 € at the current exchange rate). Unfortunately, memory cuts are not specified; however, the name with which the device is called (Ultra) suggests a possible fake since the Chinese company has now confirmed the wording Extreme.