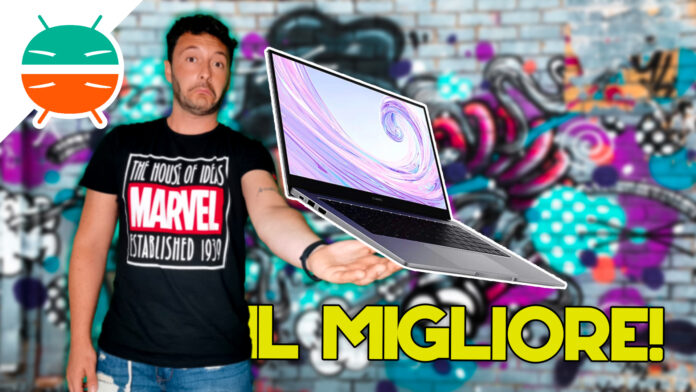 When a few years ago, during a now distant Mobile World Congress, Huawei presented its first 2-in-1s with Windows, and then introduced the first notebooks after only one year, we never imagined that the Chinese company would have succeeded in reach current levels and in such a short time at one competitive price like that of MateBook 14 2020.

Yet, after just over 3 years, Huawei's computer lineup continues to expand, and it does so with a model that could probably be considered a best-buy, not only among the company's devices, but also in its range price: is the Huawei Matebook 14 2020, a notebook that sits in the middle between the Matebook X Pro 2020 and the Matebooks D e Matebook 13, but that works so well that you could even prefer it to the top of the Made in Shenzen range.

Looking at the design of the MateBook 14, it is clear how the company wanted to create an ecosystem of devices, all very similar in appearance. Huawei's new notebook continues to retain some of the winning choices of Huawei's other products, and other technical choices that they probably would need of a revisited, such as the positioning of the webcam on the keyboard: an intelligent and certainly a winning choice from the point of view of privacy, but a little less as regards the actual framing.

The structure is always in very sturdy and pressure - resistant aluminum which, however, with its 1.5 kg makes the MateBook 14 slightly heavier than average. It is 16mm thick and integrates a USB-C port, 1 USB-A 3.0 port, 1 USB-A 2.0 port, the input for the 3.5mm jack and an HDMI output. Unfortunately, however, a slot for the microSD is missing, which would have been a real sciccheria, but there is a very fast fingerprint sensor compatible with Windows Hello, which was placed in the round power button.

In short, it is a sober and neat notebook, and it is also under the shell: the back cover can be dismantled with extreme simplicity, and all the internal components are positioned in order to facilitate any repairs. The WiFi card can be replaced without having to touch anything else, as well as the M.2 SSD module. 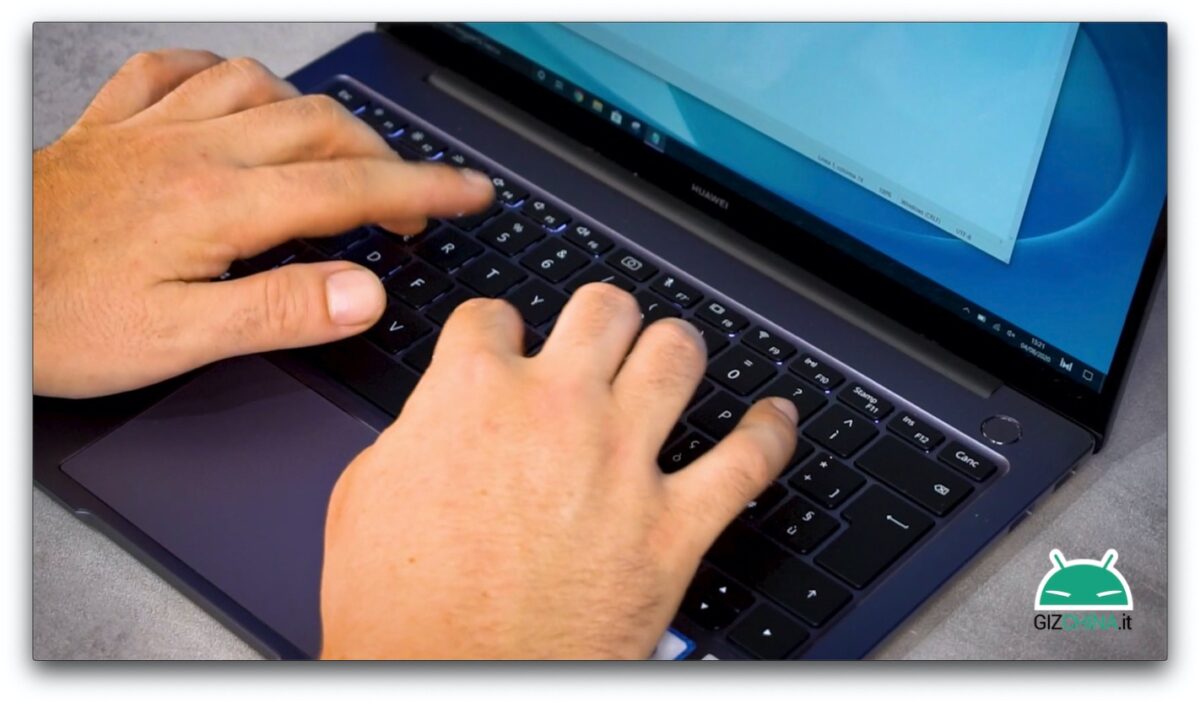 The backlit keyboard is also excellent, which guarantees a smooth ride and more than convincing feedback, the keycaps are well spaced and the rebound is quick. The trackpad is also good which, however, is not at high levels like the keyboard: don't get me wrong, it is still an excellent trackpad that is precise, fast, comfortable to use and compatible with the gestures of Windows 10.

The screen is one of the features that most catch the eye when using the Huawei notebook for the first time, especially for the 90% display-body ratio and the very small frames. It is an IPS panel (always protected by Chi Mei) with a diagonal of 14 "in 3: 2, one resolution 2K with 2160 x 1440 pixels and multitouch support. And if you still ask yourself the reason for this "strange" relationship, know that with 3: 2 you can work perfectly on a 14 ". 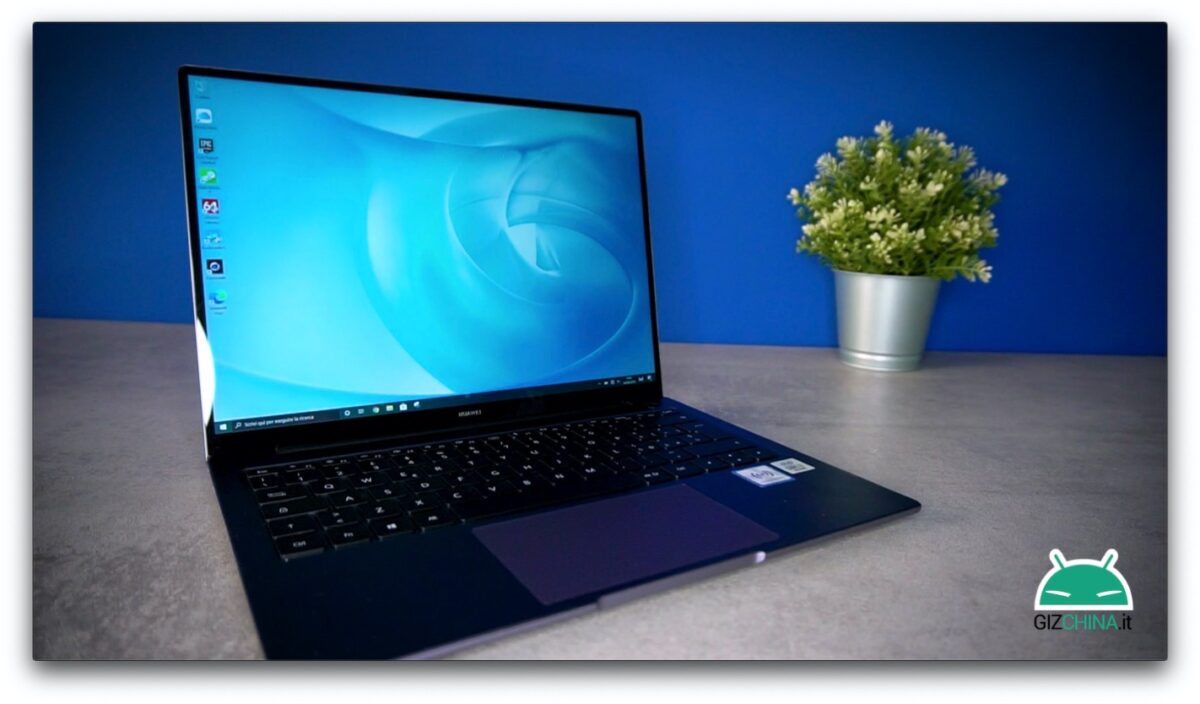 It is an excellent panel, with coverage of the color space 100% sRGB, a maximum brightness of 300 nits and that does not suffer from those backlight bleeding problems that we noticed in the MateBook 13 AMD. The point, however, is that it is a panel with a glossy finish that, let's face it, does not have a prominent brightness, which could result in poor visibility in conditions of direct light and with light sources behind.

However, in the office, at home, in places where you are not directly in the sun, the screen of the MateBook 14 it is truly a beauty. The pixel-per-inch density is fantastic, the colors are exceptional, the touch is ultra responsive, and watching movies and TV shows in streaming is truly a sight.

Huawei Matebook 14 it is on sale in two versions with XNUMXth generation Intel Core processors. That base has a Core i5-10210U with 8 GB RAM and 512 SSD, while the top one, which we have on trial, is animated by a Core i7-10510U with 16 GB of RAM and 512 GB SSD and both versions use a GPU Nvidia MX350 with 2 GB of GDDR. It is therefore an almost top-of-the-range hardware, if it were not for 2 or 3 details that, a little, made us turn up our noses.

First of all, the RAM used remains of the DDR3 type (as in the MateBook X 2020) and is soldered on the motherboard, which makes it non-replaceable (at least simply). Then there is this strange custom of Huawei's split the hard drive into two partitions (one for Windows and 30 GB programs and the other 380 GB for data), which I personally have never been able to understand and which, over time, leads to the saturation of the partition where Windows is installed and the appearance of the message "Disk space C low", typical now of Huawei laptops: in this case the solution is simple, and it will be enough delete partition D by reallocating space available in partition C, but it is an operation that I advise you to do as soon as you turn on the computer.

Finally WiFi 6 is missing which, of course, is not yet a standard but would have been the icing on the cake especially considering that Huawei was one of the main contributors to the standardization of the new wireless network technology.

Here is the complete data sheet of the Huawei MateBook 14 2020:

With our tests and benchmarks, we have come to the conclusion that it is a hardware platform fairly powerful, which proves to be able to handle everything you might want to do with a laptop, except of course the heavy rendering sessions. With the MateBook 14 you can use Chrome without worries and free from the anxiety of having to close the open tabs, you can edit photos with Photoshop without any problem, you can use more complex 3D design applications and you can also run most of the most famous games, such as for example Fortnite that will not go to the maximum graphic detail but will still be pleasantly playable in decent framerates. 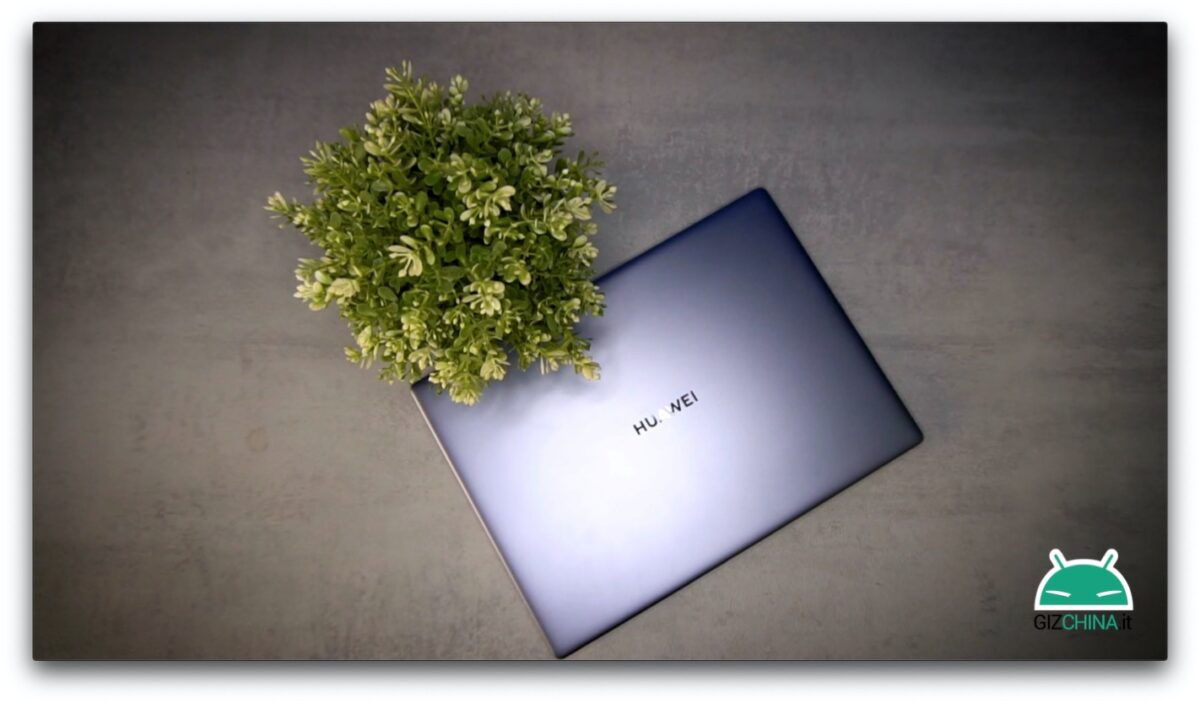 Video editing isn't excluded either, neither with this version nor with the one animated by the Core i5. It is clear, however, that miracles should not be expected and that it could be very probable to run into some uncertainty of Premiere and in a time of rendering certainly not very fast. In short, for the type of use for which the MateBook 14 2020, it's practically perfect: it never hesitates, there is no lag and using Windows 10 is really a pleasure. 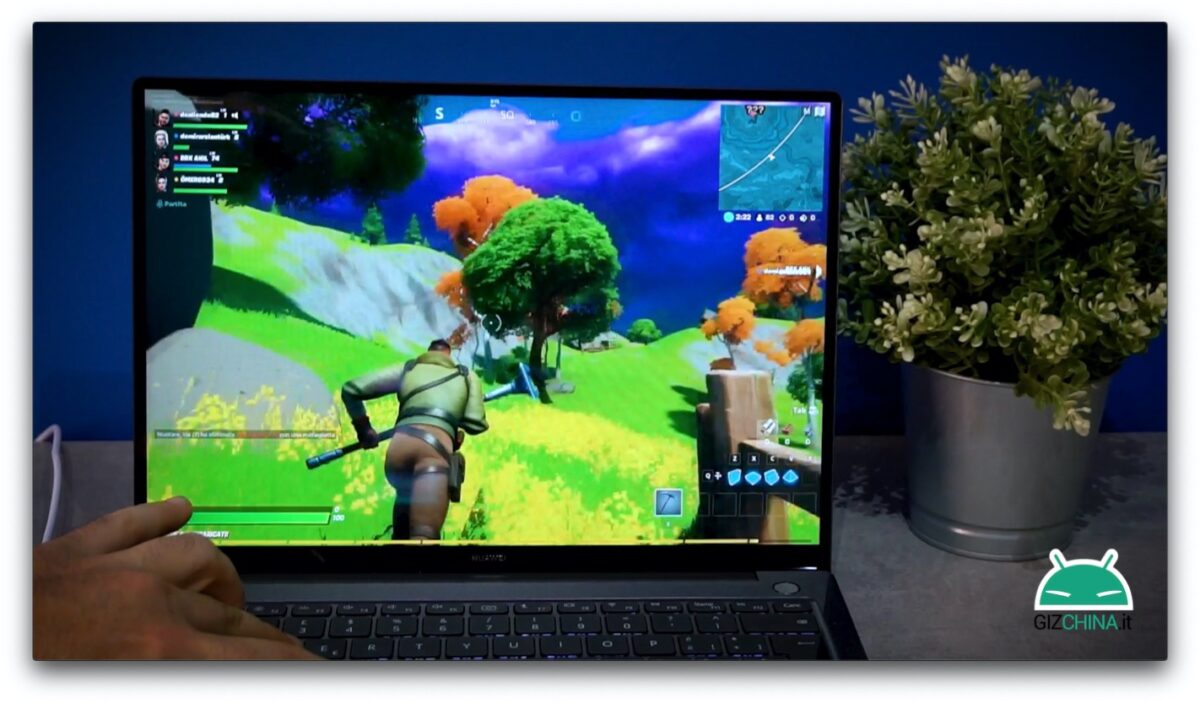 The only note that I would like to make to the new notebook of the Chinese company is related to heat dissipation because, especially with the charging cable connected and - clearly - in conditions of processor effort, the bottom of the device starts to heat up a lot and the fans are activated in a rather aggressive and noisy way. Of course, in terms of noise, we are not at the level of a gaming notebook, but I would have expected more silence from such a computer.

The battery of MateBook 14 2020 it is a 56 Wh, which certainly does not make a miracle scream but it is not disappointing either. With an average use, full of daily activities, I managed to use it for around 5 hours without giving up anything, with maximum brightness and not turning off any network device, such as Bluetooth and WiFi. 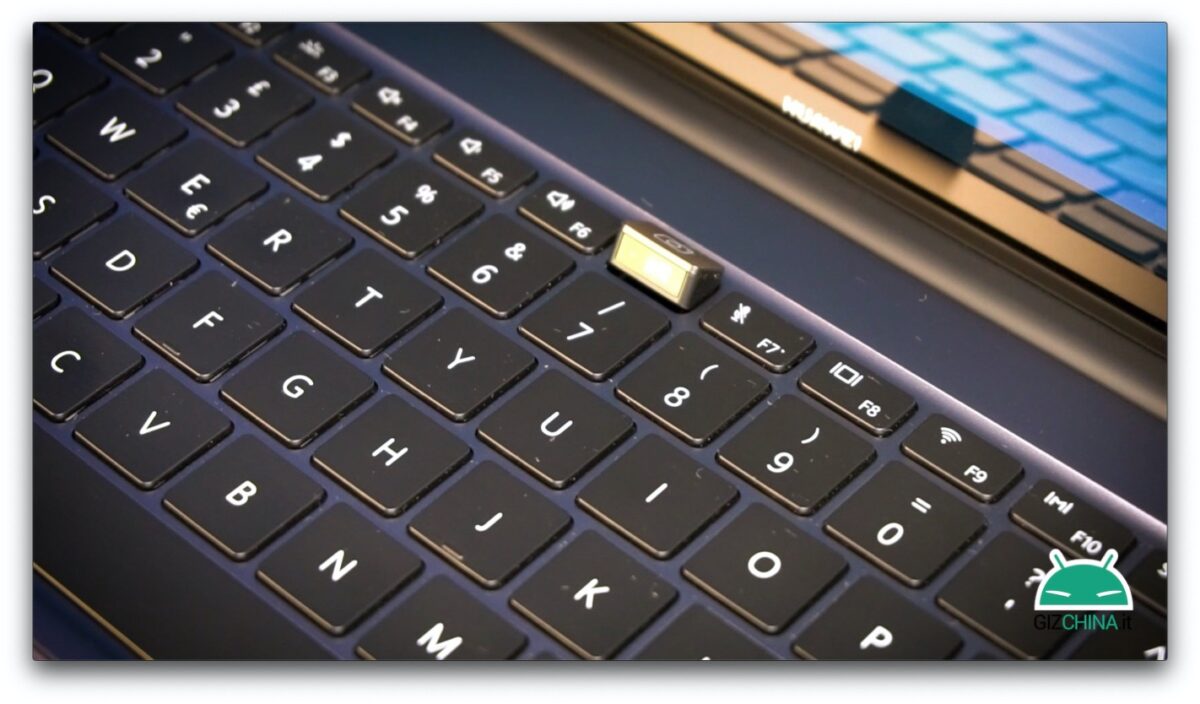 Unfortunately, however, the charging times they are quite slow and it may take about 2 hours to go from 0% to 100% with the computer turned off, and stretch even longer if you are using it: with the power cable connected, the MateBook 14 2020 does not limit performance, but the fans make themselves felt due to the increase in temperature. Which is definitely not the worst of evils, but it could be inconvenient to use the notebook while it is charging by resting it on the legs: it becomes too hot for this type of use.

Il Huawei MateBook 14 2020 has an official selling price of 999,00 € for the version with Intel Core i5, And 1299,00 euro for the version that we had on trial, animated byIntel Core i7. This is a price perhaps not suitable for all budgets, it is true, but still extremely well balanced and all in all rightly proportionate to the quality of the Chinese company's product.

Just think of the numerous offers and promotions that Huawei constantly activates: at the time of the review, for example, the Huawei MateBook 14 2020 it is at a discount on Amazon in the version with i5 processor, whose price drops by a good 100 euros.

That the Huawei MateBook 14 2020 is a quality notebook, you can immediately notice it from the screen, keyboard and mouse. These are the first signs of distinction between a good and a poor product, and in the company's notebook they are truly exceptional. It is also a very nice computer aesthetically, has high-end performance in relation to the price at which it is sold and offers good battery runtimes. 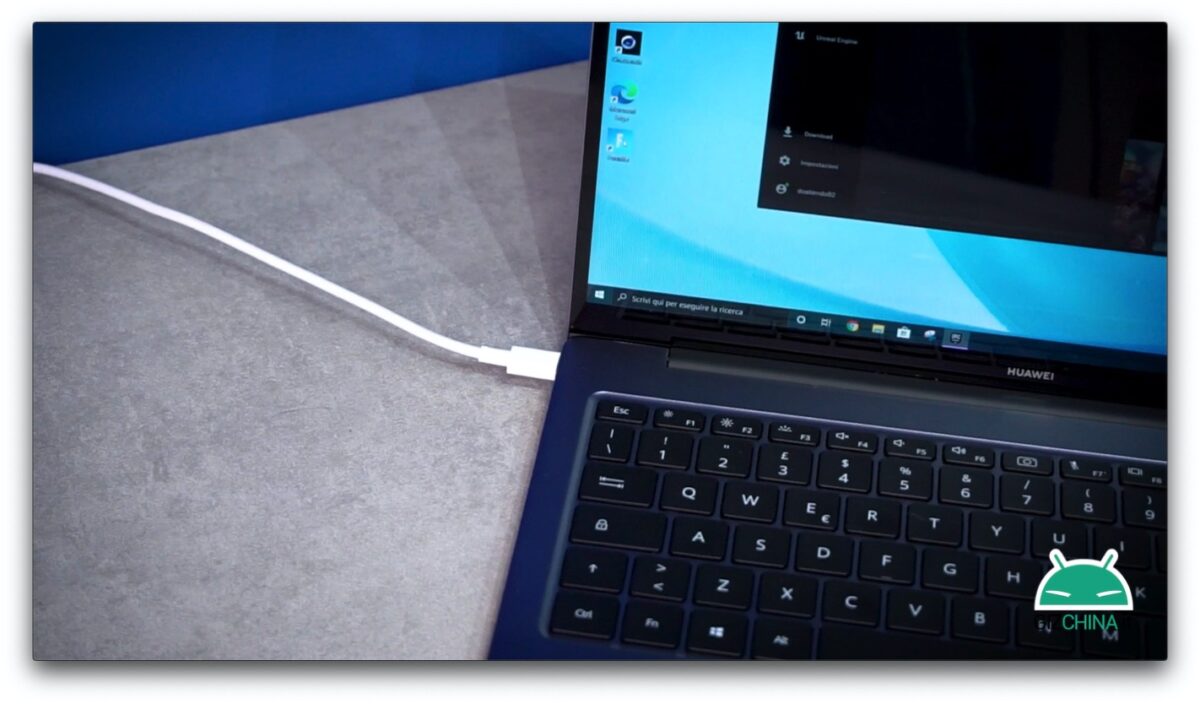 The only ones that I'd like Huawei resolved as soon as possible, in addition to the inconvenient positioning of the webcam, they concern the use of the DDR3 which - come on - I think it is now to replace with a more recent technology, and all the "constraints" that the battery charging brings: in addition to being rather slow, it makes it heat up too much the device and makes it unusable resting on the legs.

True, this year and especially in this price range, competition is really fierce. And maybe define the MateBook 14 2020 perhaps the best of its category would be too much, but nobody gets the podium. 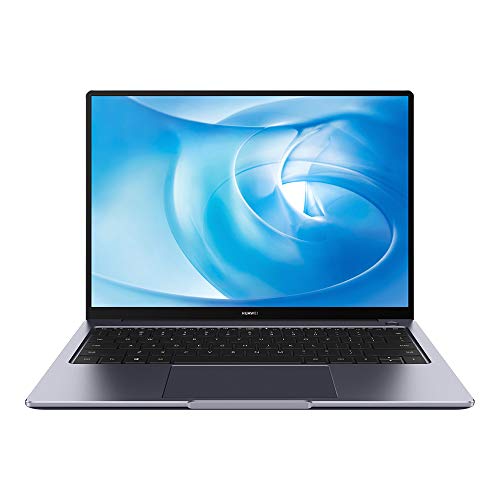