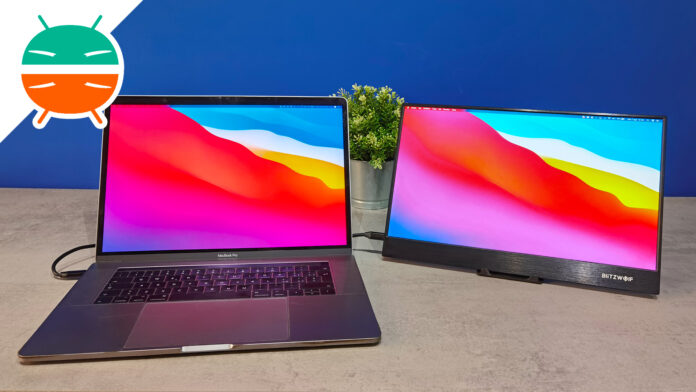 Although the world of portable monitors is relatively new, there are many companies that have started producing these small additional displays, especially now that the desktop modes of smartphones are becoming more functional and widespread and mobile work with notebooks could begin to suffer. of the lack of a larger workspace suitable for one's working needs: these are external monitors to be connected to your computer via HDMI or, even better, via USB-C cable.

And the monitor Blitzwolf BW-PCM3 is the perfect exponent of this new category, and with its 15.6 inches in FullHD and the touch surface, it manages to give that extra edge to its production activities and to add touch functionality even in those computers not equipped with this technology. But not all: in macOS, for example, Apple has totally eliminated the support for the touch screen which therefore cannot be used. 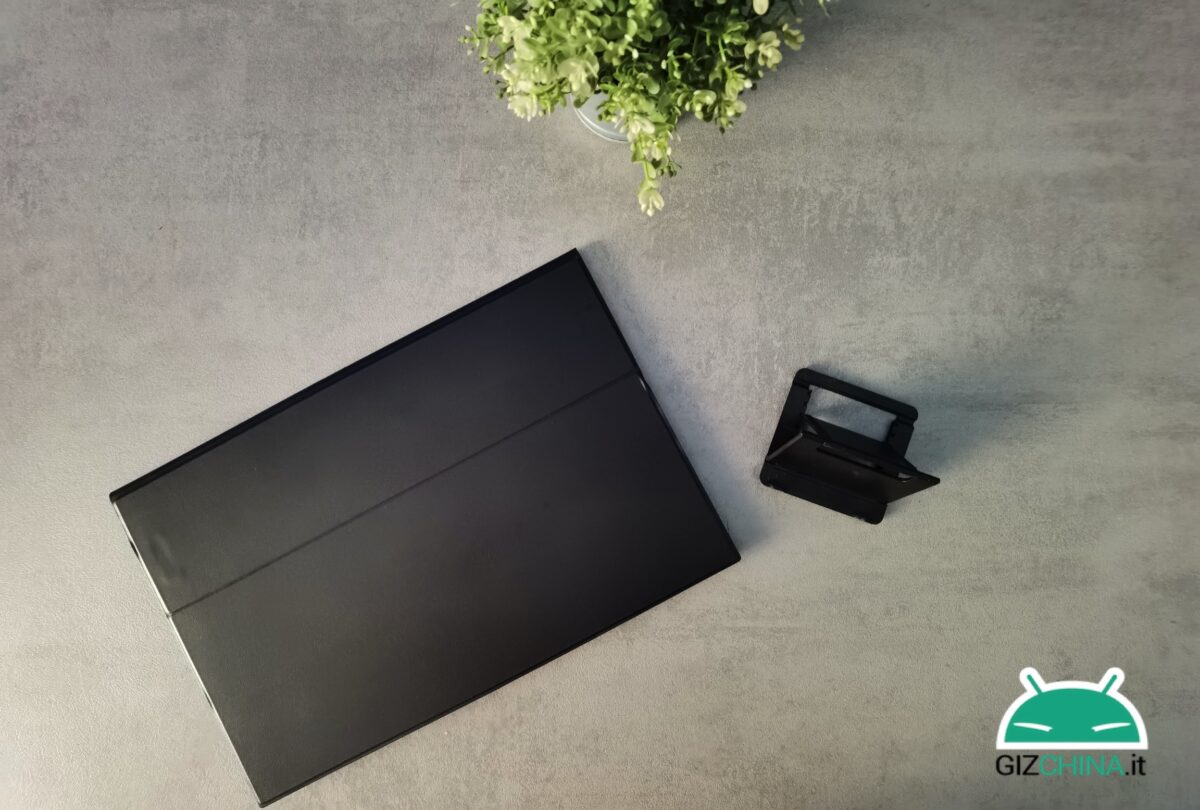 The packaging of the 3 "Blitzwolf BW-PCM15 it is complete and full of accessories. In addition to the 15 "USB-C (and HDMI) monitor with touch screen, a cover with stand functionality is included, a small plastic support with adjustable inclination, a remote control with which to control the screen and its functions, a cable HDMI and a USB-C cable as well as, of course, the power supply with Chinese plug (but with adapter).

Made with an aluminum frame and with plastic inserts, the design of the monitor 3 "Blitzwolf BW-PCM15 it is minimal and decidedly portable. Basically, the size is that of the panel, with a few millimeters more due to the bezels and the lower area of ​​the monitor, in which the company logo is also present. Its graphics, however, is the only discordant note of the design: in short, I would have preferred it to have been smaller.

Laterally they are present the buttons to manage the OSD, of which we will speak very shortly, the entrance HDMI standard format (therefore, not micro-HDMI), e two USB-C ports one of which, however, is intended only for food. Clearly, however, if you connect the monitor directly via USB-C, you could use a single cable with which the audio-video signal will be transmitted together with the power supply. 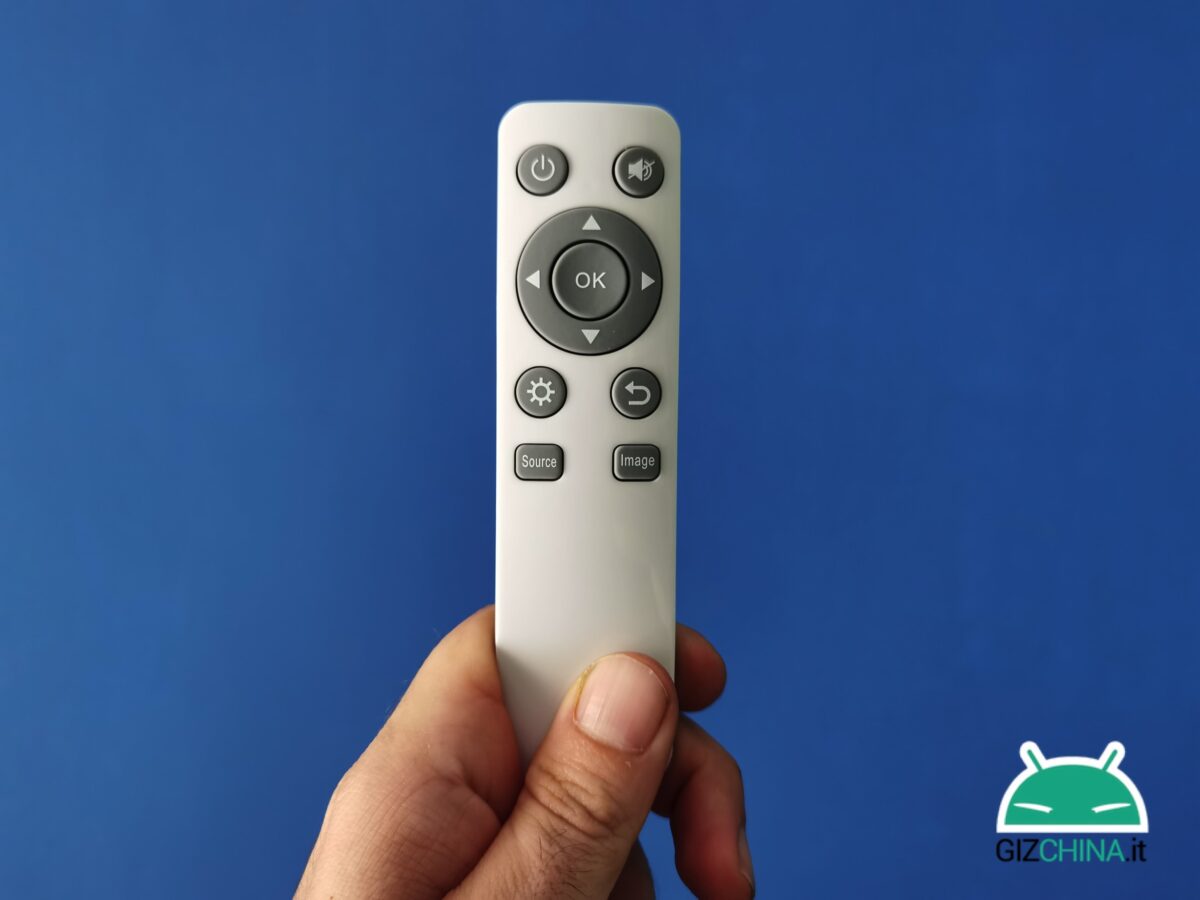 There is also a pair of stereo speakers, of medium-low quality but still appreciable, with which the reproduced audio tends clearly to the medium-high frequencies, totally abandoning the low ones. But given the small size, one could not expect otherwise.

The panel is a IPS with a 15.6 inch diagonal and a resolution FullHD in 16: 9 and a prominent brightness of 300 nits. It is a panel HDR, with good image quality, which also integrates support for the multitouch and guarantees coverage of the NTSC color range of 40% and a refresh rate of 60 Hz. In short, it is certainly not one of those panels with which to carry out photographic retouching works, but it is still a very valid support for positioning the windows of other applications while editing photos on your main monitor, for example. 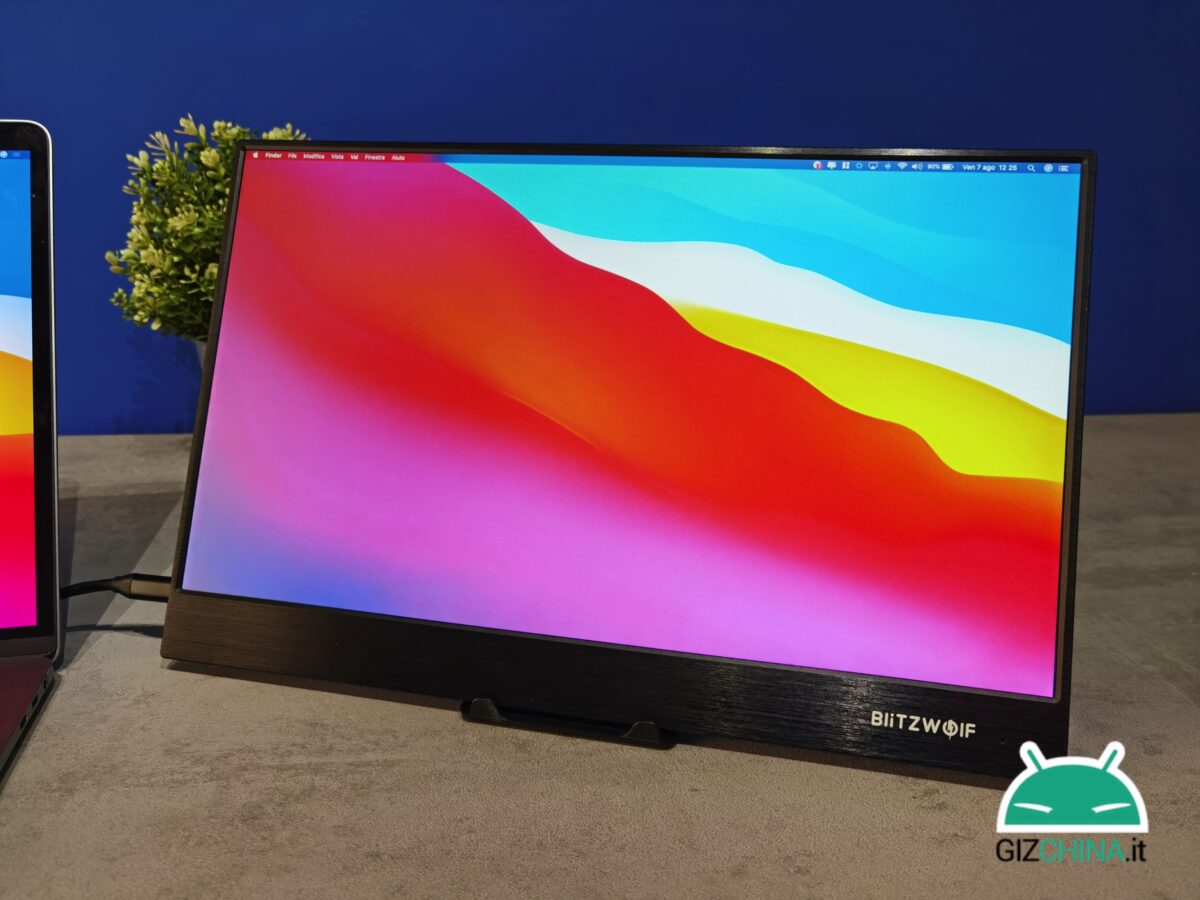 The white balance and saturation are good already with the factory settings, ed you can customize them by means of color profiles which - however - will be set each time the monitor is turned on: once turned off, it will lose its memory and turn on again with the basic settings. 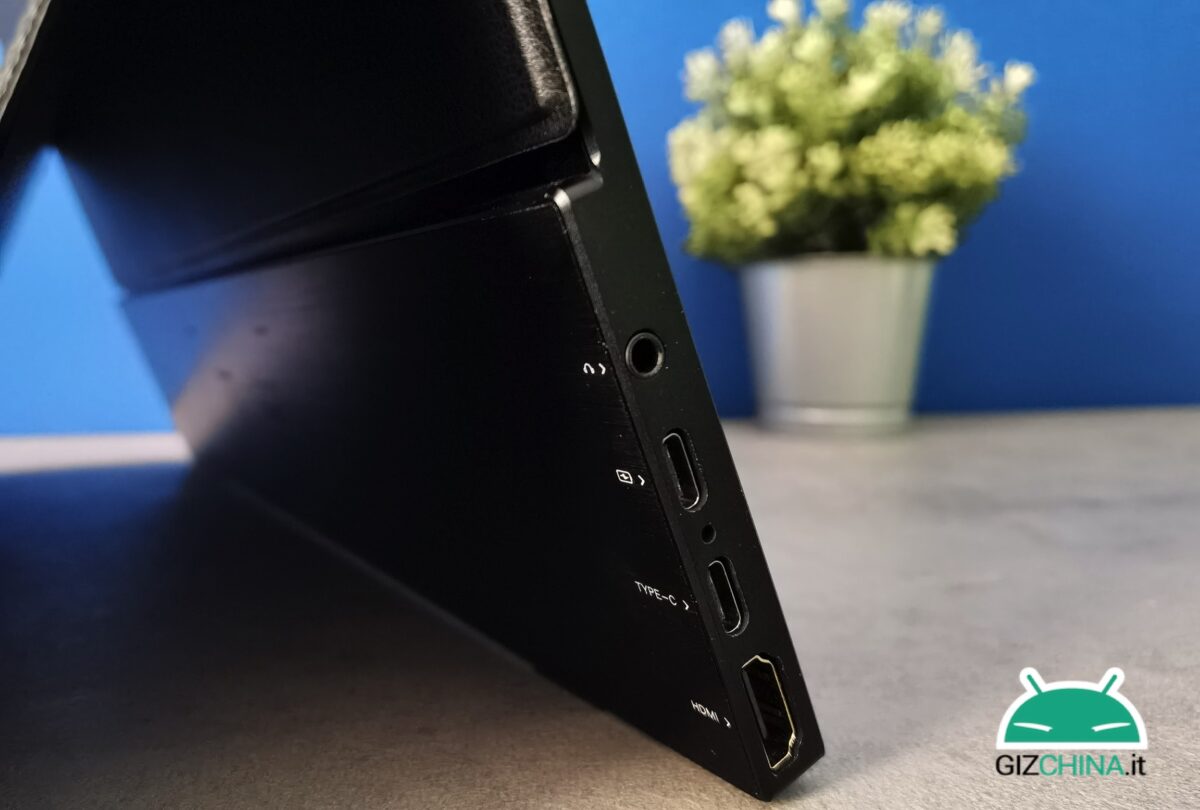 Perhaps subdued viewing angles which, especially in this 15-inch model, are very narrow and force you to have to position yourself perfectly in front of the monitor to be able to enjoy a correct and aberration-free image.

The OSD is perhaps the feature on which there is still a lot of work to be done, both for the amount of options available and for the convenience and ease of use. Basically through the menu that is managed with the side buttons (or with the remote control) it will be possible to manage all the settings related to the image, including rotation, and use the different color profiles which, as I told you, will be activated at each new start. . 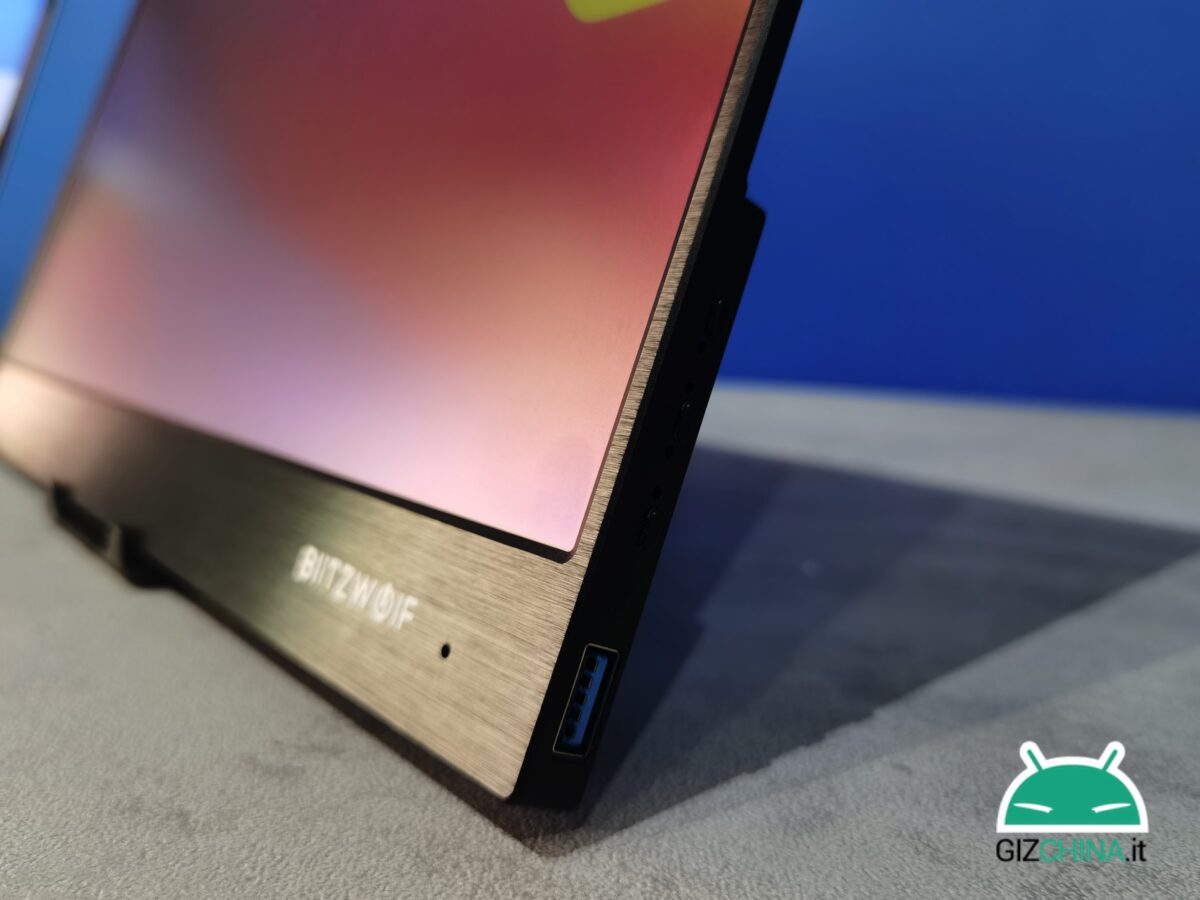 The point against the system designed by Blitzwolf lies in the navigation of the menu: on the screen no graphic guide appears to indicate the key to use for a certain action, and often you may find yourself unable to move easily in the menu, precisely because you are going to use the wrong key.

Furthermore, in the menu, there is no management control for the HDR or the touch screen, which can still be configured through any settings of the device to which the monitor will be connected.

You don't need any drivers to use the Blitzwolf BW-PCM3, neither with computers nor with smartphones. On systems animated by Windows, just connect the monitor via USB-C to use it immediately as an external display and take advantage of its touch capabilities that will work, however, only if you use this connection: with HDMI, of course, the touch functions will not be activated. 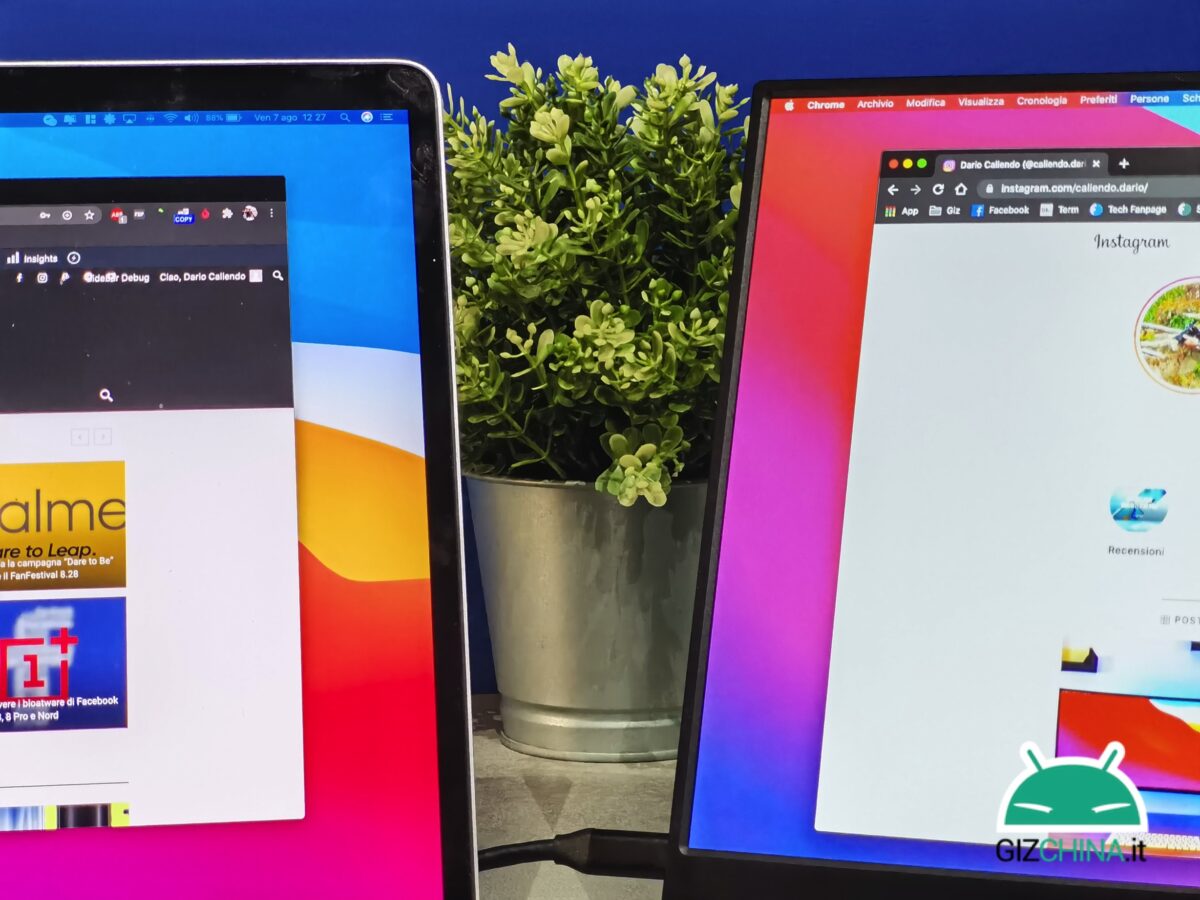 Even with Android smartphones the operation is fast and immediate. In devices equipped with desktop mode, such as those from Huawei or Samsung smartphones, once the monitor is connected, you can use the new graphic interface without any limitations, even using the touch panel of the display just as if you were using the smartphone. Furthermore, and this is a gem, the touch will also work in the traditional mode and will allow you to manage the mobile interface of the device directly from the monitor.

Problems come though when you connect the Blitzwolf BW-PCM3 to a Mac animated by MacOS, and they do not depend on the display but on the Apple operating system: unfortunately, those of Cupertino have well thought of deactivating any touch functionality in their operating system, which will make the touch screen of the Blitzwolf portable monitor totally useless. Sin.

The official selling price of the Blitzwolf BW-PCM3 is 164 euros on BanGood. A price after all in line with the quality of the product, which even drops to 146 € using the coupon you find below.

And given how much it costs and the features it integrates, the portable USB-C and HDMI monitor Blitzwolf could be the most convenient solution not only to expand your workspace, but also to be able to play on the go with your smartphone or, why not, with a console such as Ps4, Xbox One or Nintendo Switch.

Buy Blitzwolf 15 '' USB-C Portable Monitor at a discount and with shipping included in the price.