For years the world of Chinese notebooks has been chock full of devices capable of guaranteeing a decidedly economical price, provided that you accept some compromises, especially related to hardware and construction materials. But things are changing lately also in this particular niche sector, and more and more often Chinese products can be found on the market in made with higher quality materials and, above all, with more powerful hardware.

We saw it with the Kuu K1, the first Chinese notebook to be powered by an Intel i5, and we review it in theAldocube i7Book, another example of the category which, however, seems to point higher: it is animated by a Intel Core i7 and has an integrated graphics card Intel Iris Graphics 540. Of course, it is not a gaming PC, but with its configuration you could start running slightly heavier applications and games. At least on paper.

The packaging ofAldocube i7Book it is extremely minimal. The box with which it is sold contains nothing but the notebook, the wall power supply and a very simple (and useless) instruction manual.

Despite the cheap selling price, theAldoocube i7Book it is made with a magnesium and aluminum alloy frame and a matt gray finish very pleasant to the touch and which transmits good solidity. On the back of the display panel there is the small company logo, positioned in the upper left corner, and its 1.35 Kg make it very comfortable to carry with you on the move: it is 322 x 212 x 16.6 mm large.

But despite this it manages to stand out for a series of not indifferent qualities, such as the rich presence of side doors among which we find 3 USB 3.0, a HDMI standard size, one door USB-C capable of transferring data and which also allows charging the notebook, one microSD slot, the input for the 3.5mm jack and the input for the wall power supply that comes out in the package.

The webcam is positioned at the top of the monitor and integrates one switch manual with which it will be possible to cover it to preserve privacy, while the speakers are positioned laterally to the full-size keyboard, available as usual exclusively with the English layout. 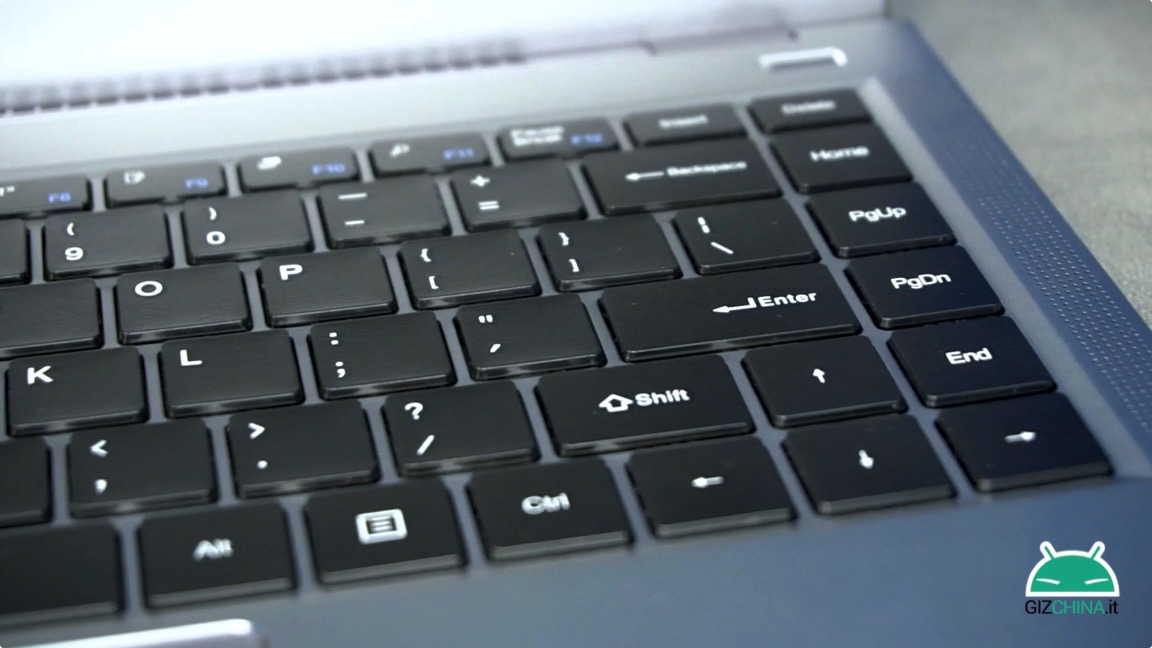 The keyboard is not backlit and even if it is made with mostly cheap materials it manages to return a fvery nice typing eedback: the keys are large and well spaced, and have a stroke well proportioned to the type of product. In the box stickers are not included to adapt it to our language, but personally I find it a more than right choice, because it is something that I just can't swallow.

The trackpad, on the other hand, is of a good size, but conveys a rather "plasticky" feeling, especially as regards the physical click, which I personally found too hard. However, it is a very precise and fast pointing system, which manages to manage all the ones without any problem Windows 10 Home gesture which is pre-installed in the device.

The screen ofAldocube i7Book is a 14.1 " with glossy finish and FullHD resolution of 1920 x 1080 pixels. The panel used it's an IPS which guarantees a correct density of pixels per inch and which in fact is in line with the price range in which the notebook fits. Sure, it's not the best looking screen on the market and it brings with it all the shortcomings of low-end IPS panels with color poco saturated and black poco deep, but the viewing angles are good and the maximum brightness is also optimal to ensure a good view in very bright environments. 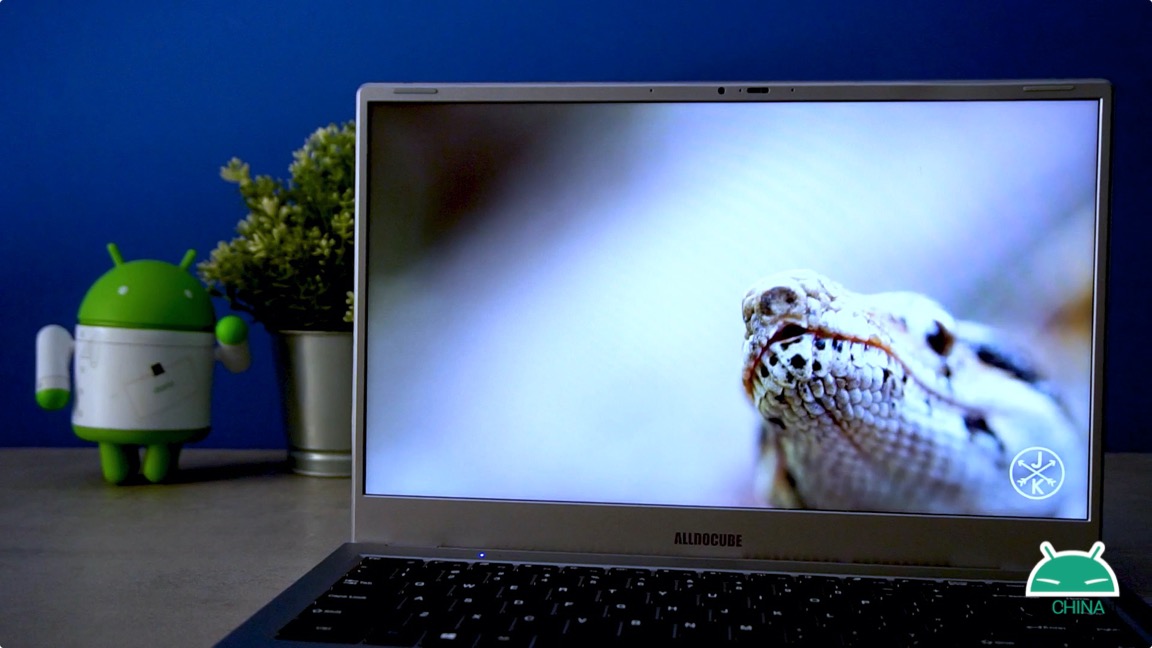 Given the opaque workmanship of the panel, reflections are reduced to a minimum, but above all considering the price range of the notebook we must admit that the work done by those of Aldocube it's pretty good and playing on Netflix or other video streaming services or playing games, are always pleasant and all in all of good quality.

My experience in GizChina made me slightly lose my being biased towards the world of Chinese notebooks, and indeed the performance of theAldocube i7Book they contributed a lot to it. To animate this Chinese notebook there is a Intel Core i7-6660U which works at a base frequency of 2.4 GHz but which can go up to 3.40 GHz, flanked by an integrated GPU Intel Iris Graphics 540, 8 GB of DDR4 RAM memory and a SSD from 256 GB which can also be expanded thanks to the dedicated slot located in the lower area of ​​the notebook.

Do not miss the form WiFi 801.11ac, which guarantees excellent signal reception, and the Bluetooth 4.2: in short, considering the price and the results of the benchmarks we ran on the notebook, the hardware of the Aldocube is definitely satisfactory: certainly the processor is one Skylake launched by Intel in 2016 (so don't let yourself be too conditioned that Intel Core i7 is written on the data sheet), but the hardware of this Chinese notebook is more than sufficient for the most common operations and also guarantees a good management of multitasking with multiple open applications .

What left me a bit perplexed, however, is the cooling system. From the moment the fans are switched on, they make themselves heard a lot, and when carrying out more complex operations, it will be necessary to accept the fact that using theAldocube i7Book it will mean having to always hear their noise in the background. And it is a strange thing, because even in the stress test the temperature never rose above 60 degrees and there was no minimum thermal throttling. 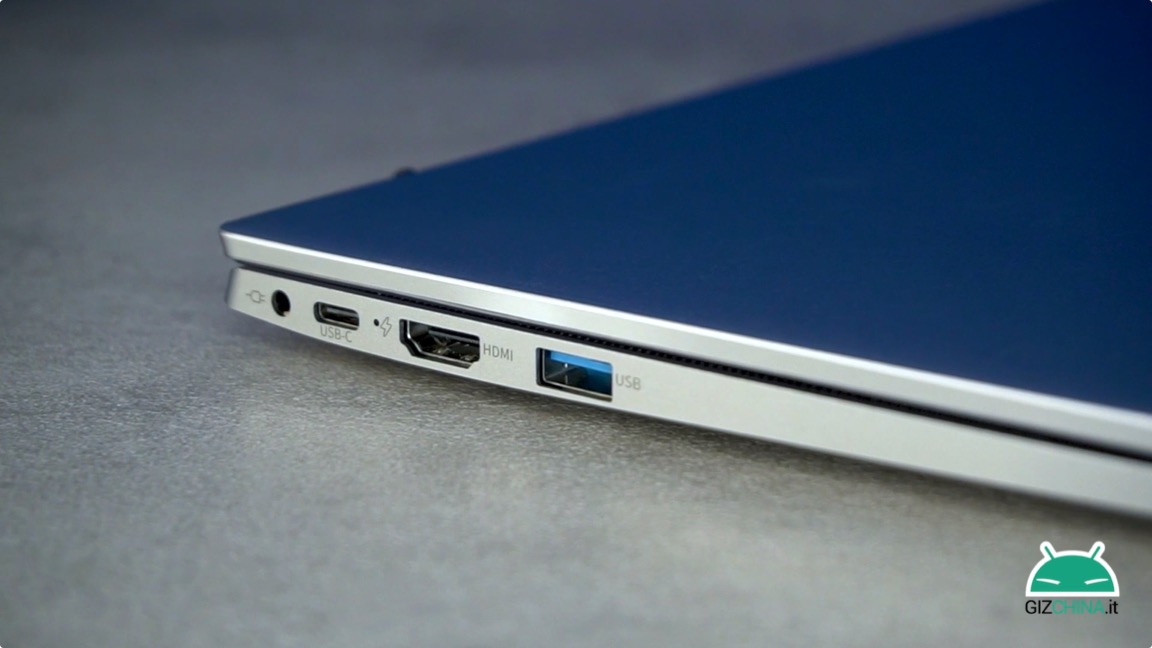 As for gaming, I was quite surprised when I found out about to be able to play League of Legends without too many limitations, games like Asphalt 9 they run without notable problems, but when you start to go heavy theAlldocube i7Book begins to waver and does not give up: I also tried to play Fortnite, it is possible to play with graphics settings at a minimum and with a framerate certainly not high. But it is possible, and let us always remember that it is a notebook that costs poco more than 400 euros.

definitely the integrated stereo speakers subdued, which reproduce an audio tending mainly to medium and high frequencies, completely leaving behind the low frequencies, the listening volume is good, but not excessively high, while the audio captured by the microphone is of good quality and does not present any problems of kind. 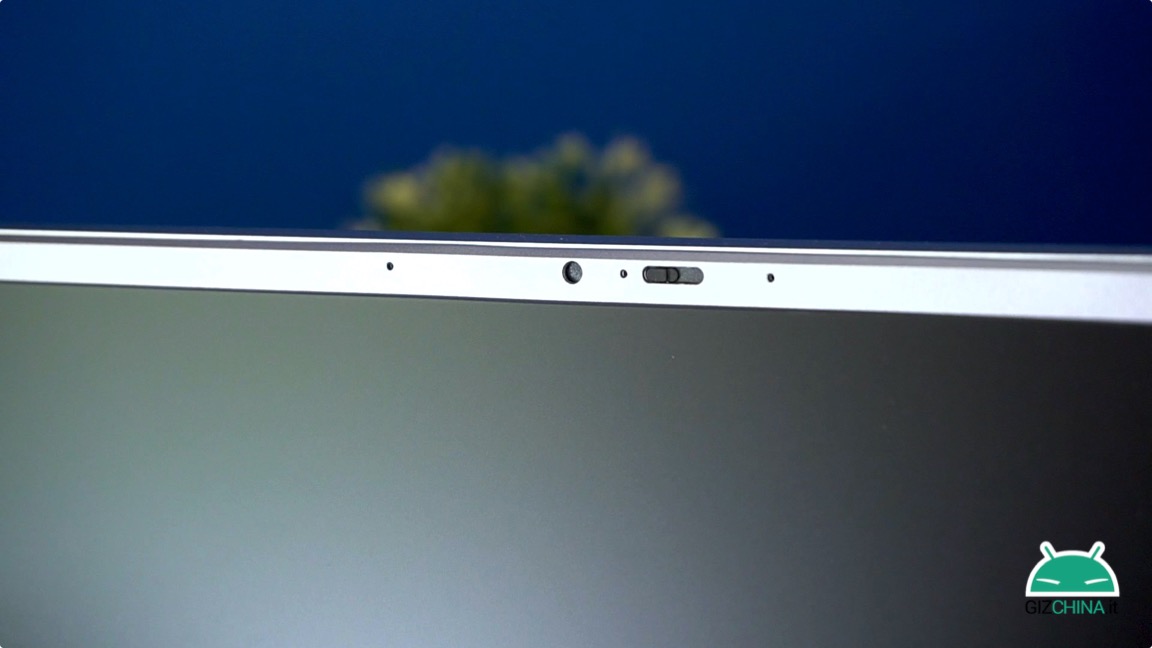 La webcam from 2 mega-pixels is positioned in the upper area of ​​the screen and integrates a highly appreciated mechanical switch for its coverage, but guarantees rather poor performance especially in low light conditions. In short, let's say that it is suitable for carrying out video calls or videoconferencing, as long as you are in a well-lit environment.

The integration of the battery by 51.3 Wh that inAldocube i7Book manages to guarantee an autonomy of about 4 hours, with an average use in which I carried out sessions of web browsing, streaming with Netflix and Spotify, writing with WordPress and a very short session with Adobe Photoshop, and without worrying about turning off Bluetooth or WiFi , or to lower the brightness of the system. 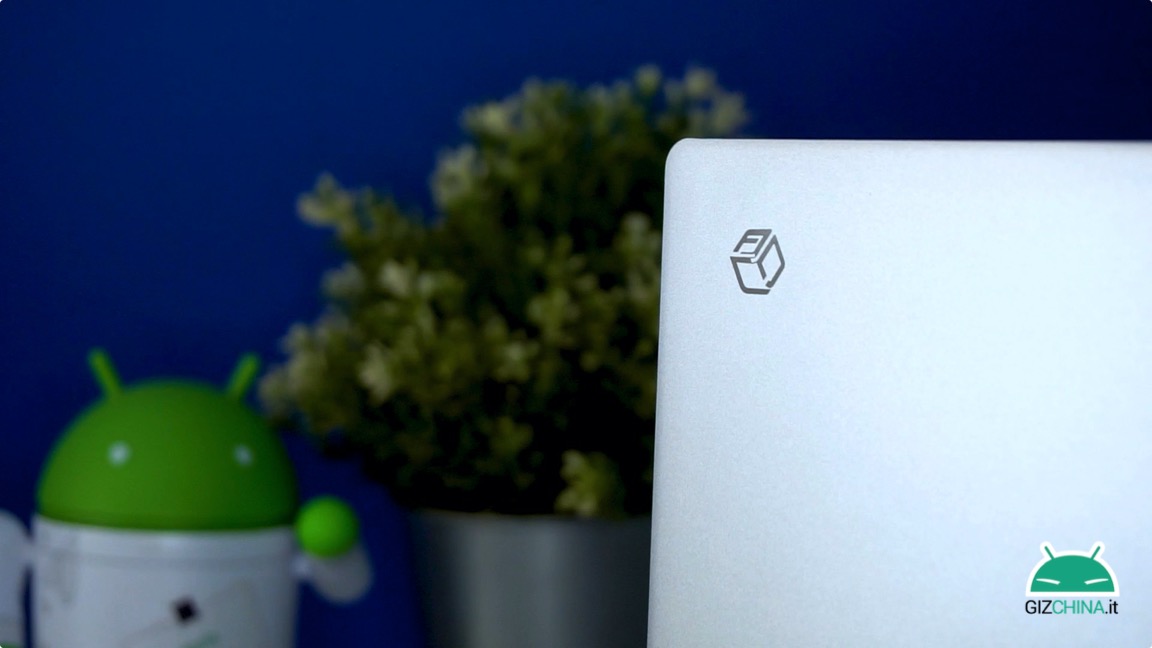 Good charging times, also possible via the USB-C port, and which can require a charge from 0 to 100 from 2 to 3 hours depending on the power supply used.

The official selling price of theAldocube i7Book is $ 549 on Bangood, but using our coupon (found below), you can buy the Chinese notebook with i7 at 390 euros. Which is not bad at all, especially considering that we are talking about one of the most versatile and powerful budget Chinese notebooks currently in circulation, which is able to support even those slightly more complex operations where, in general, this category of devices begins to waver. 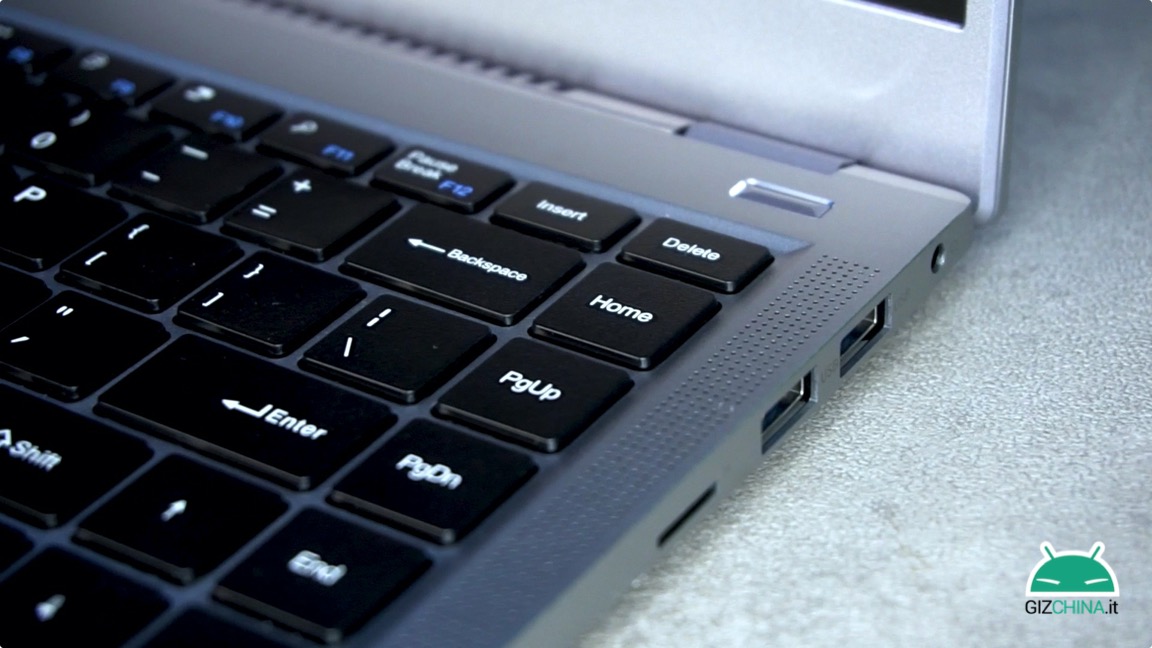 Of course it is not perfect and it brings compromises, but it is the ideal solution for all those people looking for a cheap notebook, with which to perform productivity operations and also a "light" gaming without too many problems, as well as playing movies and TV series and everything related to the classic "university" use smart working. Of course, thinking of playing very complex games with it is almost utopia, but it is undoubtedly the model with the most powerful hardware in its price range.

The Indian government talks about the ban of Xiaomi, OPPO, vivo and ...