A few hours away from the appearance of OnePlus 8T on the benchmark platform, Geekbench he also gives us a model of Lei Jun's company, presumably from a code name Xiaomi Apollo. Here is the first information on this device, which could be yet another flagship coming soon. 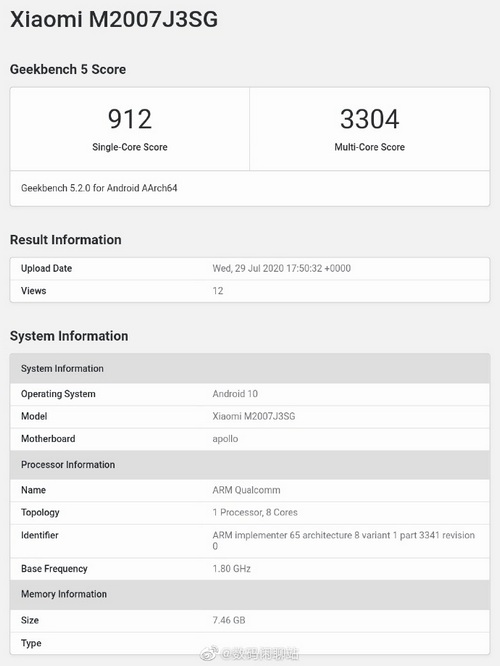 Well yes, in addition to Mi 10 Ultra and Redmi K30 Ultra there may also be another device, at least based on what can be seen from the latest benchmarks popped up in the Geekbench database. The new spotted model arrives with the initials M2007J3SG (reminiscent of the one from the Mi 10 Ultra, M2007J1SC) and scored 912 points in single-core and 3304 in multi-core. The device seems to have the code name Xiaomi Apollo.

Benchmarks also report the presence of 8 GB of RAM and Android 10; it is also a solution based on the Snapdragon 865, a detail that suggests that we are dealing with a high-end device.

At present, it is not known whether it is actually an unpublished smartphone or a new version of an already known model. Obviously there is also the possibility of dealing with fake benchmarks. However, we look forward to further news and as soon as new rumors emerge about Xiaomi Apollo we will update this article.