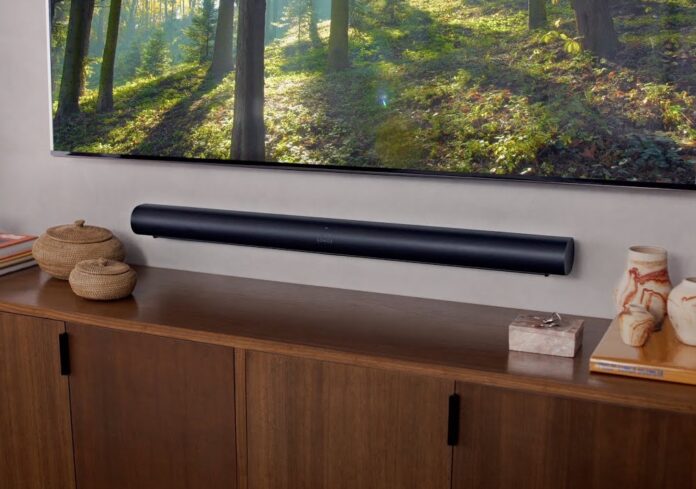 Those who do not know Sonos, or have never appreciated not only the audio quality of its products, but above all their perfect integration in a decidedly evolved ecosystem, have lost a lot. Since the first Play One and Play Five, up to the new Sonos One and the highly appreciated Sonos Beam (a smart soundbar that integrates Alexa and Google Assistant), I have always considered the US company as "the Apple of audio", because it is Sonos that, over time, has managed to create an ecosystem of quality products that are exceptionally connected to each other, but sold at a market price certainly not for all budgets.

And the new one Sonos arc, arrived in stores for about a month and who in fact sends not one, but two of the company's products (the Playbase and the Playbar) into retirement, the Americans confirmed their position on the podium as regards the quality of the products, but also as regards the expense that must be done to be able to take them home: the Sonos arc, older sister of the more compact Beam, costs 899 euro. But, believe me, for those who can or want to spend it, it is blessed money.

Well, I'm trying it out Sonos arc just released, but I wanted to wait some time to talk about it, with the hope that the company could solve some problems related to the audio rendering of their new smart soundbar. But, will they have succeeded? Spoiler: yes. Almost.

Sonos arc it is 114 cm long. And so to speak, it is almost as big as the longest side of a 50 ”TV. For this, the first advice I would like to give you is to imagine buying it only if you have a TV at least of this diagonal. The design is minimal, without frills, and sees a rounded bar, very long and made of aluminum, wrapped in a metal mesh on each side.

Nothing gorgeous, nothing that falls to the eye, in typical Sonos style. The soundbar can also be hung on the wall, but with an accessory to be purchased separately, and basically integrates two main ports: the one for the power supply and the one for HDMI: this is in fact the only way to connect the Sonos arc to your TV, i.e. via an HDMI cable compatible with ARC technology. Which means that to connect the harmless sound bar of Sonos it will be necessary to sacrifice one of the HDMI ports of your TV: for this, I would have preferred that the Arc had integrated an HDMI in port and an HDMI out port, in order to act as a "bridge" and do not make an HDMI unusable as a video input. 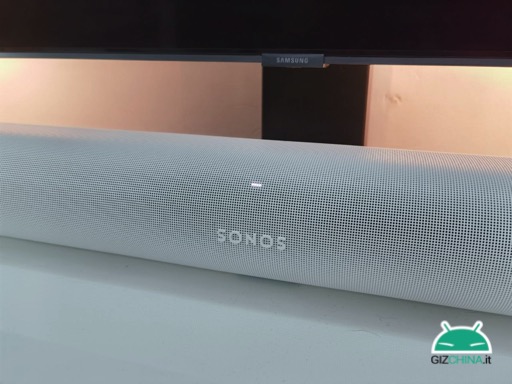 In the upper part there is a small status LED which you can decide to keep on or off, but which will turn on inexorably if one of the two digital assistants with which the product is compatible is activated. There are also touch controls with which you can manage music playback, or disable the microphones. But as for the number of microphones and their sensitivity, we will talk about this shortly.

If you do not have a TV with an HDMI ARC port, you could opt for the connection via optical cable, using the adapter that comes out of the package, but in this case you could lose control of the volume via the remote control: a very uncomfortable thing.

It will not be enough to connect the Arc to your TV to be able to use it fully. Because, as a smart soundbar, everything is managed through an application with which it connects via WiFi or ethernet cable: it is the Sonos S2, a new app that those of the company have introduced both in the Play Store and in the App Store concurrently the release of the new soundbar, with which it will be possible to manage all the system parameters, including the association with one of the digital assistants with which the device is compatible. 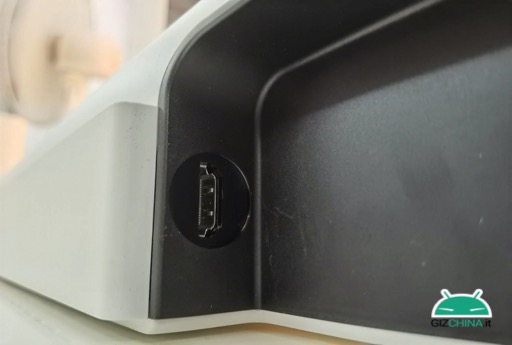 And in addition to Google Assistant and Alexa, Sonos arc It is also compatible with Spotify, Amazon Music, Tidal and many other online streaming services which, among other things, can also be controlled by voice and completely independently of your smartphone.

The configuration process is however extremely intuitive, and is structured so that it can be completed even by those who totally ignore the dynamics of technology. If you also had a Sonos Sub, or a pair of Sonos One to use as surround satellites, pairing the devices would be very simple.

Sonos arc it is managed by the new Sonos S2 application, an app that has been substantially revisited both as regards the interface and as regards what is hidden too much. For those who have already had the opportunity to use the old application of the company, it is important to know that already from the first use there are substantial changes both as regards speed and as regards stability: if in the old version it was possible to stumble on firmware updates not successful, for example, with the new Sonos App S2 these inconveniences will be only an unpleasant memory.

But the fundamental novelty of the new application is the support for high definition audio formats which, together with a faster search in the various streaming services and a practically immediate response in the management of the speakers (the volume control, for example, is at zero lag), it's not bad at all.

The biggest flaw of the Sonos application, however, lies in the fact that TruePlay (which I will talk about later, and which is fundamental especially for the Arc) is available only in the iOS version. It is a sound calibration system that is based on the acoustics of the room in which any Sonos speaker has been mounted and which, through a procedure of a couple of minutes, will optimize the audio performance of the company's devices based on to the room and their positioning.

And it is precisely in the listening phase that the lack of TruePlay in Android smartphones makes itself felt a lot. The reason? Simple, just turned on and connected Sonos arc using the factory settings, one could regret the purchase made: the sound is dark, flat, too many medium frequencies, few low frequencies. In short, a mess. Fortunately, however, with the latest software update this problem has been solved, at least in part, but it is precisely by completing the TruePlay optimization that the Sonos arc it changes its face, and probably turns into one of the best soundbars in its price range. But the question I ask myself is this: who does not have an iPhone or iPad sufficiently recent to be able to run the Sonos S2 app, remains screwed? 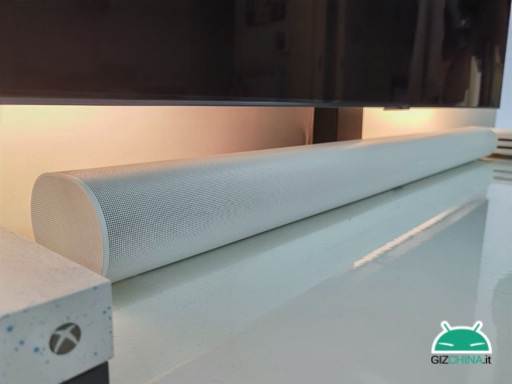 However, once TruePlay optimization is complete, things change radically. Now the timbre is complete, the bass is present and no longer washed out as if it had just been turned on (or never updated) and the spatiality of the sound is excellent: the sound quality is on par (if not higher) than that of a Sonos Play: 5, with a point in favor of the Arc precisely with regard to stereophonic spatiality.

The point is, however, that in all Dolby Atmos compatible soundbars, the criticality of the system calibration is always present: and the Sonos arc it is one of the very few smart soundbars capable of being compatible with Dolby's latest surround technology.

For those unfamiliar with Dolby Atmos, it is a surround sound technique that is based on up to 128 sound objects, instead of real channels. Basically it manages to reconstruct three-dimensional audio by processing the Dolby TrueHD signal, or Dolby Digital Plus (or Dolby Digital). The differences between the two are substantially in the resolution of the audio: the first is high resolution, and is available only in some types of sources or devices, the other is a compressed format and is the most popular version especially in the various services online audio and video streaming. 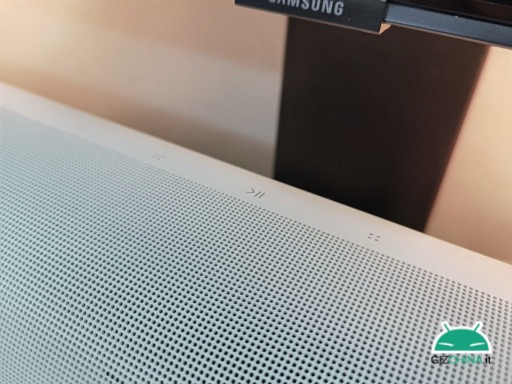 Going back to us, and always keeping in mind that we are talking about a soundbar and not a physical multi-channel system, I must admit that the new arrival in the Sonos house is doing really well.

I listened to several music tracks, both from Spotify, and from vinyl (connecting the turntable to the Sonos Amp), and with loseless audio files and, after the last update which corrected a problem of "croaking" of the bass, I was surprised by how much the sound bounces into the room. And the same effect occurs when watching files in 4K and DolbyAtmos: if you position yourself ahead of the Sonos arc, you will be able to appreciate every little sound reproduced, which however is missing if you move from the room (and this is the effect of TruePlay, which calibrates the soundbar according to the main listening position).

Sonos arc is on sale with a list price of 899 €. A figure definitely not suitable for all budgets and, above all, for all people: an avid audiophile, for example, would shiver at the sound of the name "soundbar". All in all, however, it is an excellent product that is able to bring in the living room both an excellent sound system for TV, and a fantastic music player equipped with a smart system thanks to Alexa and Google Assistant.

In short, those of Sonos have managed to achieve their dual purpose perfectly, even if the lack of DTS could make someone turn up their noses: do not worry, adding the Atmos decoding is a winning choice and considering that with the Sonos arc you bring home practically two, or rather three products, I would say that the price is more than balanced. On the other hand, the quality, especially in the audio, you pay, but it would be better if it were totally available even for those who do not have an iPhone.