The strong strategy of Realme continues, with which the Oppo spin-off company is attempting to establish itself in all market segments, with devices that clearly seem to have been produced and presented with criteria and that have allowed Realme to start from low and then be able to position itself in the medium / high range with very interesting devices.

And after theX3 SuperZoom, the turn of the Realme X50 5G, the new smartphone presented today that brings with it some of the characteristics of the model equipped with periscopic zoom (such as the 120 Hz display), in a decidedly lower price range where, however, there are many competitors, and they are mostly all driven by the same SoC used in the new Realme: lo Snapdragon 765G, clearly based on a 5G platform.

The sales package of the Realme X50 5G is, as always, in line with those of the other products of the company, there are no particular innovations that can distinguish this model from other competitors and includes:

As well as basically all the devices of the same market segment in which the new smartphone of the Chinese company fits, also the Realme X50 5G it is certainly not a device characterized by particular design cues to be imprinted in the mind. Of course, slowly as the company goes on, the structure and the materials used become increasingly solid and (almost) like those used in the top of the range and the back, which is made of curved glass, creates very beautiful reflections especially in the green color that we received on test which is decidedly pleasing to the eye. The profile is made of opaque aluminum and on the back there is the bump chamber which always remains vertical.

On the right there is the power button which integrates a fingerprint sensor, very solid and quality and very fast in detecting biometric data, while on the left there is the volume rocker with two keys, perhaps a little too dancers. This is not a light smartphone, it weighs 202 grams, but on the other hand it is decidedly comfortable to use. At the bottom there is the dual-sim trolley, the USB-C input and the only speaker with which the smartphone is equipped in addition, of course, to the ear capsule which, however, does not perform any function for stereophonic sound.

Under the body of the Realme X50 5G there is a Qualcomm Snapdragon 765G, flanked by 6 or 8 GB of dual-channel LPDDR4X RAM, an Adreno 620 GPU and 128 GB of UFS 2.1 internal memory. Certainly not top-of-the-range hardware, as it should be, but definitely performing and more than suitable even for the execution of more complex operations or games more eager for computing power: remainder of the idea that the true SoC of this quest 'year is precisely the 765G, a less expensive processor than the 865 and yes, on the less powerful card, but with the best price / performance ratio and decidedly not very greedy for energy. 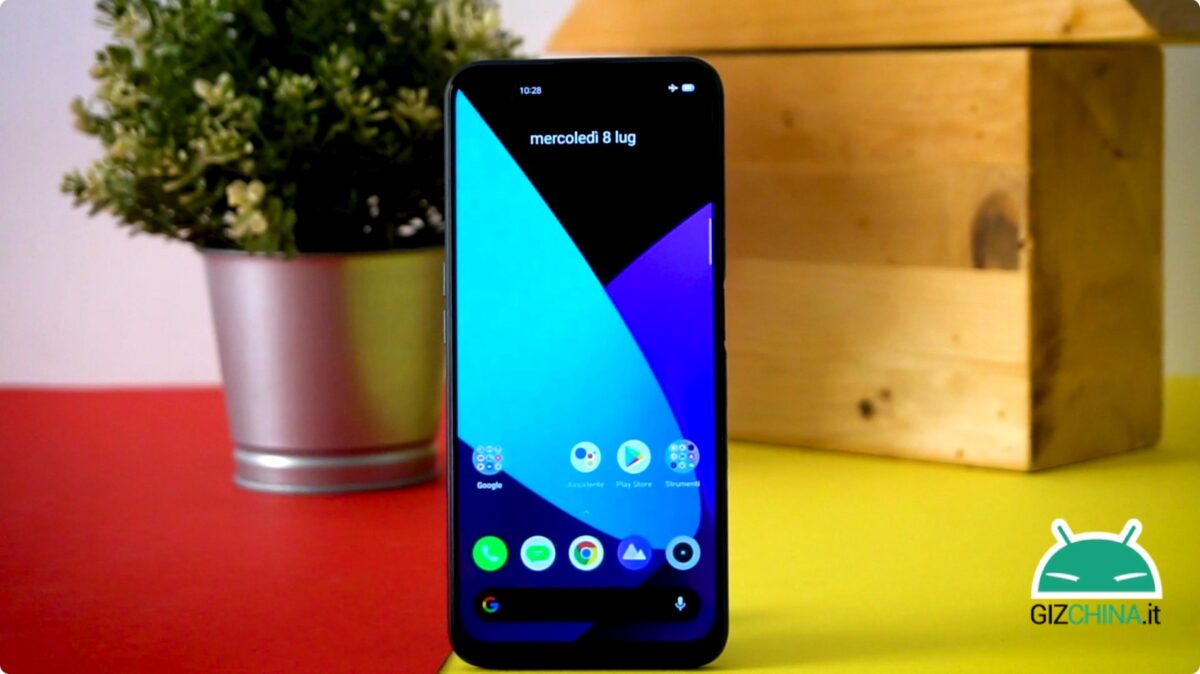 Unfortunately, in the sample we received on trial I did not have the opportunity to install any benchmark application but, of course, it is not a problem of the phone but of the device we received: it may happen that some of the pre-production samples are not yet certified to the 100% and therefore some applications cannot be installed. Anyway, from my experience, the thesis I was talking about before is supported by the many stress tests that I made with AnTuTu on devices with the same processor, obtaining decidedly important results: despite the fact that smartphones were put under stress, temperature management it is excellent, also thanks to the liquid cooling it uses, and the performances are constant and stable. 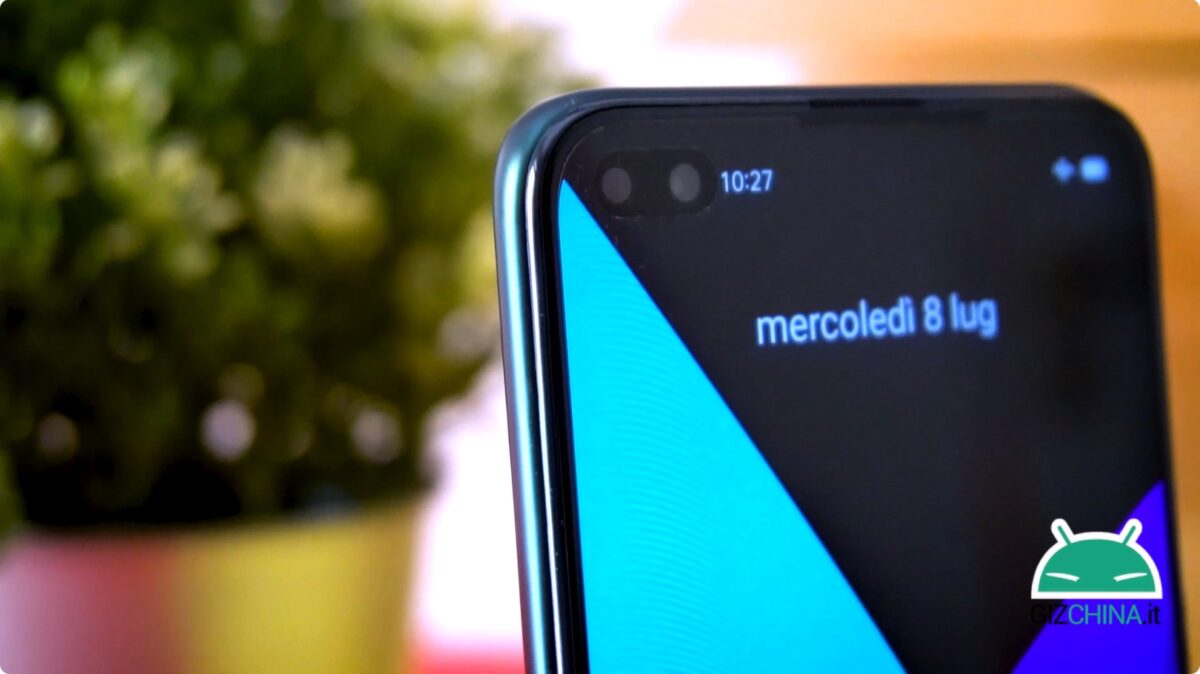 No stereo sound, but the only speaker that will be used to listen to the hands-free content is of a decidedly sufficient quality, and reproduces a well-balanced sound in the tones which, ok, perhaps tends a little at medium and high frequencies but which guarantees an excellent volume of 'I listen. Also good is the ear capsule which guarantees a sound quality and a listening volume that is definitely more than enough for making calls. 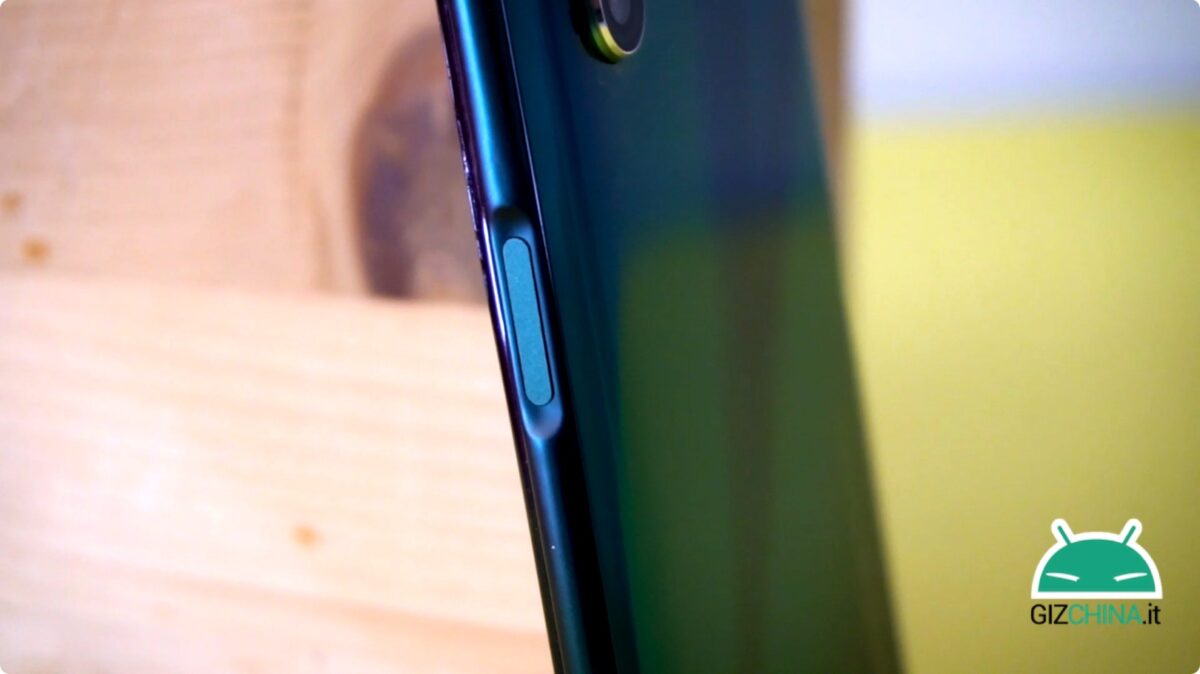 Sufficient the reception of dual band WiFi ac and the reception of the cellular network, which in our test have always proved stable and very useful the presence of NFC which can also be used for payments via smartphone with Google Pay and similar.

Basically, the screen of the Realme X50 5G it is the same as the X3 SuperZoom, not only in features but also in size. Okay, it's a cheap 5G smartphone. And ok, in this price range you can certainly not expect more. And yes, the 120 Hz screen is definitely an added value. But I continue to be of the idea that the decision to use an IPS panel is not one of the best made by the company. 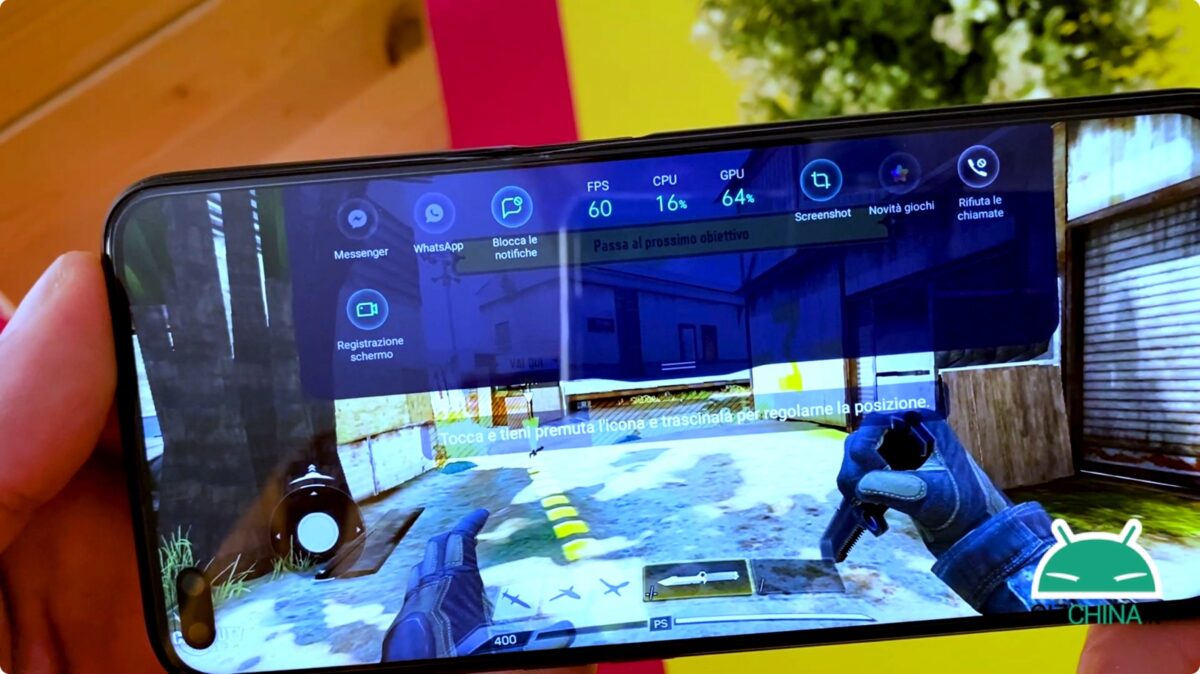 But don't get me wrong, it's a great one 6.57-inch Full HD + panel with a resolution of 2400 × 1800 pixels which also guarantees a good density of pixels per inch, but carries with it all the weight of the IPS technology: it certainly has a very good saturation and white balance, but the blacks are shallow and the angles of very narrow vision.

All in all, however, this is a more than adequate solution for the price range, indeed, in some respects it is much more performing than the competition: through the operating system settings it is possible to choose between the automatic update speed, or the 120 Hz or 60 Hz fixed.

The sensor for automatic brightness is also good, which is not as "bad" as in the other devices of the company and which is able to correctly set the brightness suitable for the environment in which it is located, even in conditions of direct light.

The cameras of the Realme X50 5G there are six in total: four rear and two front. But let's face it, two of these 6 cameras could save them. The main sensor is a 48 megapixel f / 1.8, which is flanked by an ultra-wide 8 megapuxel f / 2.3, a 2 megapixel mark (with a focus distance of 4 cm) and a black and white sensor from 2 megapixels basically used for bokeh.

In short, the photographs taken with the new Realme smartphone are of good quality, but they certainly do not make you cry out to the miracle, even if the presence of the optical stabilizer is felt and makes work at the new Super Nightscape 3.0 night mode much easier. it integrates the tripod mode and the Ultra Night Mode, and which can also be used with the wide angle, but with rather poor results. 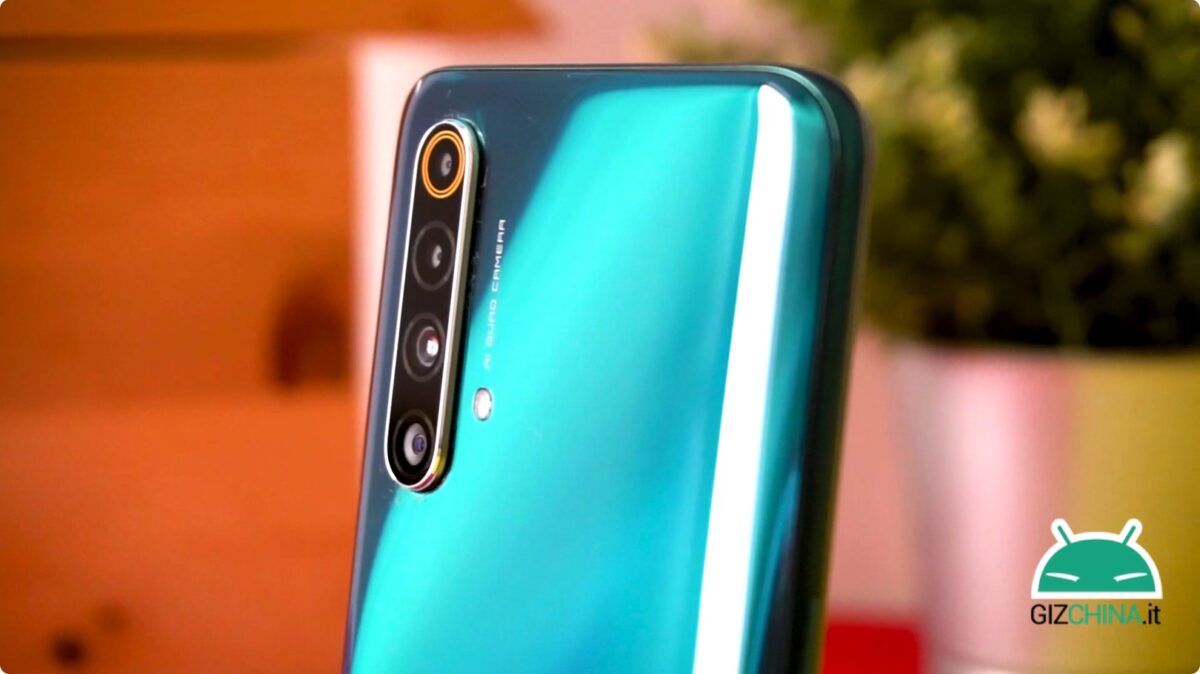 Also good videos, which can be recorded at the maximum resolution of 4K to 30 FPS and that enjoy a good optical stabilization, but that they could have problems related to autofocus, which at times could decide not to focus precisely: but I am convinced that this is a software problem that can be solved over time.

The front cameras are two, a 16 megapixel with Sony sensor and a 2 megapixel used for bokeh, and are capable of recording slowmotion at 120 fps with photo / video results of discrete quality and in line with the price range of the device.

even the Realme X50 5G it is animated by Android 10 customized by the new Realme UI, a GUI very similar to the Color OS, but studied perhaps even better than that of Oppo. It is an excellent graphic interface, with all the elements in place and created with criteria, which guarantees very fluid animations especially with the display active on 120 Hz.

There is the Widevine L1 certification, there is one-handed mode, apps with split screen can be used and there is a good game mode that optimizes in-game performance and which is characterized by a decidedly less invasive interface than the competition. In the operating system you navigate by gesture and all company customizations are not very invasive and very pleasant to use.

The battery used in the Realme X50 5G is one 4200 mAh with 30w Dart Flash recharge, which manages to guarantee an autonomy of just over a day even with intense use and which, in my case, managed to power the smartphone for just over 4 hours of display on (fixed at 120 Hz), going from 100% to 10% with game sessions at CoD Mobile and a rather stressful use of the camera too. The performance of the 30W fast charging system is also good.

It is a decidedly very low price, which places the smartphone in a market segment full of alternatives in which there are devices that, let's face it, are characterized by very similar technical specifications.

The reality is that one could consider the Realme X50 5G another one represents an attractive market segment for many, in which, however, all the same devices are now on sale. However, what this smartphone represents is another step forward for the company in its attempt to conquer the market of cheap smartphones (5G). 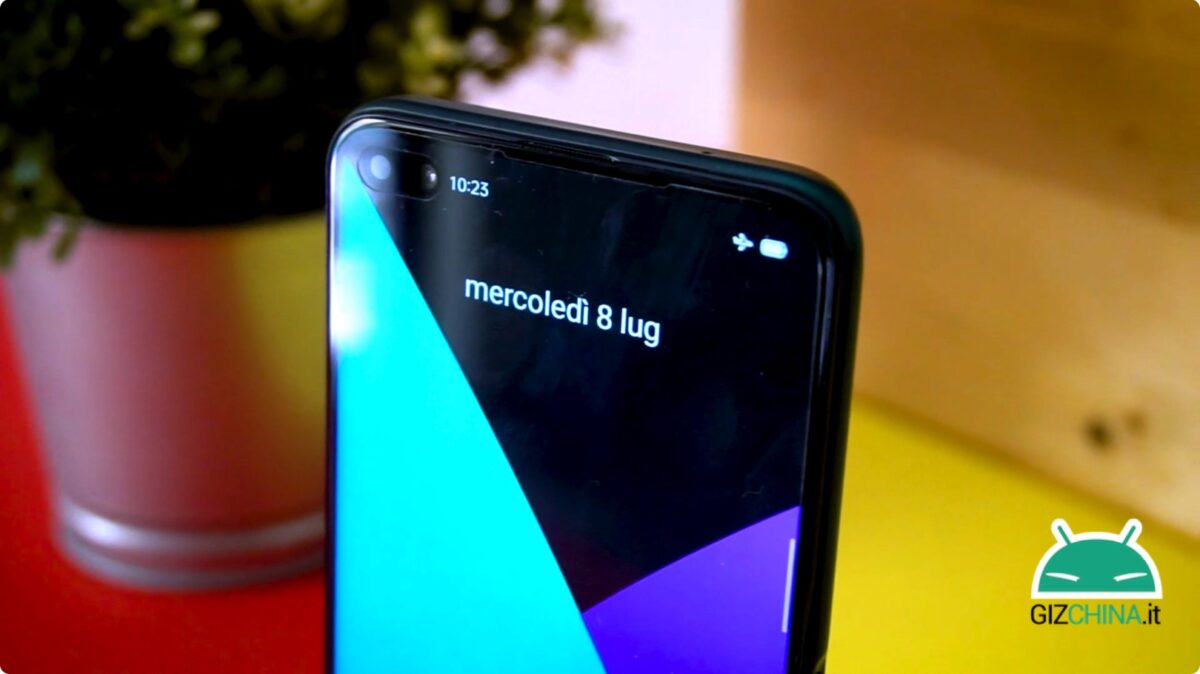 This time, however, we are talking about a device "like many", which does not carry any significant hardware peculiarities and manages to guarantee the exact same performance compared to some of its direct competitors. What is the needle of the balance, you will ask yourself. That is, why a user should choose to buy one Realme X50 5G? The frequency of updating, the Realme UI and, why not, the aesthetic aspect.

Myths to dispel on Huawei without Google: how Facebook works, ...