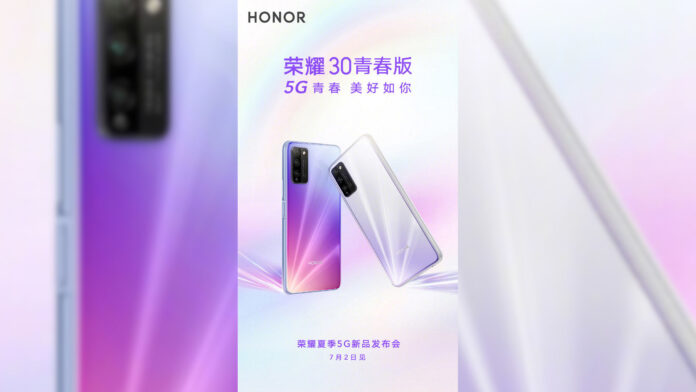 After the last V30 - also arrived in Europe as View 30 - the Chinese company is preparing for the debut of its new main series. Still missing a date but it's all clues pointing to the month of April. In addition, the range will also be enriched by the 30S model, a device initially unveiled by a marketing campaign in advance and then subject to rumors with technical ed images. The news does not stop here and now a new model spotted on the TENAA portal may have confirmed the presence of Honor 30 Lite (Youth).

1 / 07 Update: new confirmations arrive from the company, plus a photo leak showing all the colors available at launch. Find all the details at the end of the article.

Update 30/06: after specifications and release date here is also the alleged sale price of the Honor 30 Lite (Youth).

Update 29/06: the Chinese company has revealed the release date of Honor 30 Youth.

Update 11/05: we have the first rumors about the launch period.

Honor 30 Lite (Youth): images and specifications from the TENAA certification

The smartphone - signed AQM-AL10 - it should belong to the new family arriving, but there is no absolute certainty. However, the design confirmed by the images of the Chinese certification body takes care of the media for this hypothesis. The device recalls the 30S model (which in turn recalls the V30) and therefore it is legitimate to assume that it is Honor 30 Lite (Youth), especially in the face of the best range specifications. Below are the various details released by TENAA.

Obviously, at the moment there are still several details missing, as well as a confirmation on the identity of the SoC on board. However, after this appearance on the TENAA website we expect further rumors about Honor 30 Lite, perhaps with photo leaks and other information on the data sheet.

The wall of silence of the rumors on Honor 30 Lite breaks after several weeks from the last clues. This time the rumors speak to us of the smartphone launch period, scheduled for the month of June July. The company would have decided to distance it from the main series, given the number of models proposed. Particularly Honor 30S, a middle ground between the high end and the mid-range absent in previous generations. Based on the Kirin 820 with 5G support, Honor 30 Lite could be based on the Kirin 810 still based on LTE networks, thus being able to keep costs lower. But since now all the attention is shifted to the series Honor X10, will be discussed more concretely after May 20. 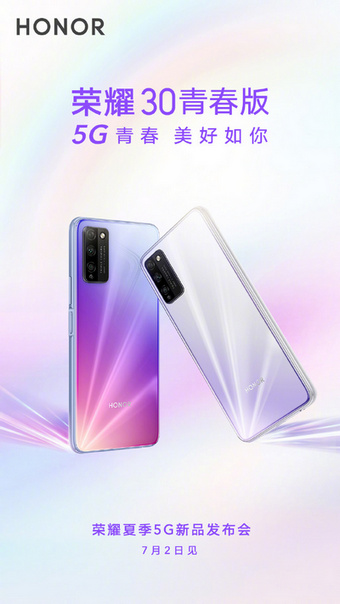 After weeks of rumors and rumors, the new model of the Chinese house finally has a presentation date. Honor 30 Youth (o Lite, if you like) the next one will debut in China 2 July, according to this official poster published by the same company. It is the same day as the launch of the X10 Max model, the new colossal smartphone with a display of over 7 inches (here you will find everything you need to know, between leaks and confirmations).

As for the new Lite model, this will complete the 30 series lineup. Yet - observing the specifications of the TENAA and the images - it really seems to be facing a rebrand of Huawei Enjoy Z, model launched in May.

How much does Honor 30 Lite (Youth) cost? The first rumors about the sale price have leaked Update 30/06 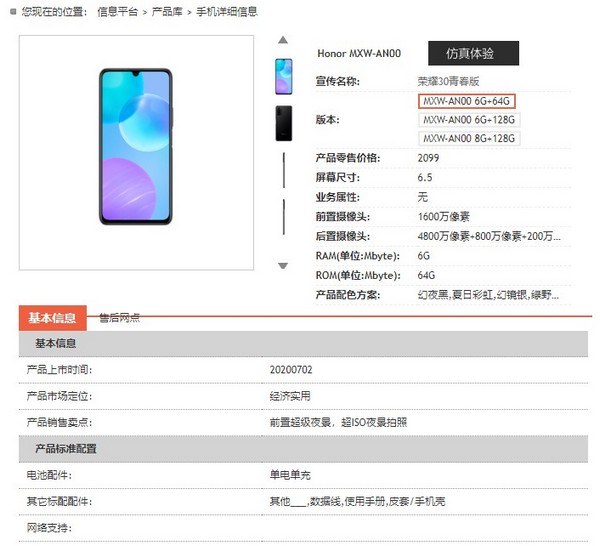 As we have seen on several occasions, the data sheet of the new model coming for Honor is now quite clear. Between the TENAA and the belief that we are faced with a rebrand of Huawei's Enjoy Z model, the picture appears very complete. Only one detail is missing: how much it costs Honor 30 Lite (o Youth, being a China device)? The price of the device is subject to a new leak, a few days after the launch event.

According to the latest news, the device will arrive in three variants, all present in the list of products of the China Telecom operator. The smartphone will be launched with 6/64 GB of memories, 6/128 GB and 8/128 GB on board; the three models will be sold at the following prices:

Obviously it is not said that the figures in question are exact, so it is better to take everything with due precautions, at least until the launch event on July 2nd. 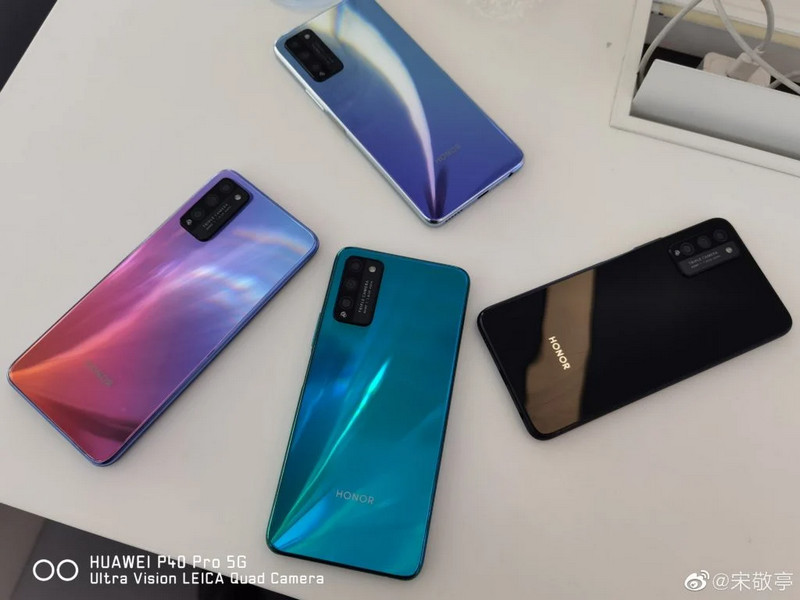 Very little is missing from the launch of the new one Honor 30 Lite (of course we are talking about the Chinese Youth model) yet the rumors and confirmations from the company show no sign of slowing down. We know pretty much everything about the new device coming soon, including details about the alleged prices: all you need to do is attend the launch event and find out the latest news.

Meanwhile, a photo leaked on the net (you see it above) shows all the colors available at launch. These are the same variants in the list of China Telecom: Magic Night Black, Wizard of Oz, Summer Rainbow and Magic Mirror Silver (certainly there is no lack of imagination regarding the names). The click shows the back completely and it is possible to glimpse the fingerprint reader along the right side. The lower edge, however, houses the USB Type-C port and the 3.5 mm mini-jack input for headphones. 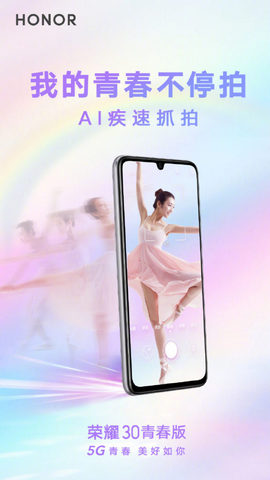 Meanwhile, Honor has also released a new teaser, focusing on the photographic sector. This will rely on the feature AI Speed ​​Capture, capable of capturing moving subjects by taking precise and detailed photos (probably thanks to a faster shutter speed).