Some time has passed since the arrival in the Italian market of the Mi Band 4 and now Xiaomi is more than ready to confirm its leadership regarding the place on the highest podium in the world of wearable devices. And it does, of course, with the new version of the smartband most appreciated by users all over the world, which therefore reaches the fifth generation which, despite being officially presented on 11 June, is currently only available for the Chinese market.

We speak clearly of Xiaomi Mi Band 5, the new smartband of the company that we have been testing for some time and which despite not representing a great update compared to the previous version, introduces some very interesting innovations that make it in some respects even better than the Mi Band 4.

Xiaomi Mi Band 5 review vs. Mi Band 4: what are the differences?

Basically, in terms of form factor and design the Xiaomi Mi Band 5 very similar to the Mi Band 4 and, when turned off, probably no one would be able to distinguish the two models, at least not at first sight. But there are differences, and they are also quite important.

The first novelty that immediately stands out is that in the Mi Band 5 a slightly larger AMOLED display was used compared to the previous generation: it goes from 0,95 inches to 1.1 inches. And even if the difference may seem minimal, in the new Xiaomi smart band the screen has smaller frames and a decidedly larger area to interact with and to read information on. In short, even if at first glance it could seem that an identical display has been used compared to the fourth generation, it is precisely by placing the two smartbands next to it that you realize the difference: on the Mi Band 5 there is that extra space that really gives access to more information.

Still as regards the display, those of Xiaomi have made progress also in the maximum brightness, which now reaches 450 nits (the Mi Band 4 reached 400 nits) and that makes viewing text and images more pleasant even in direct light conditions. However, a step back has been made regarding the depth of the colors, which go from the 24 bits of the previous generation to 16 bit area of Xiaomi Mi Band 5 but, let's face it, without tangible differences that stand out from the eye. Unfortunately, however, the automatic brightness adjustment is still missing, and you are still forced to set the value manually: which is really a nuisance, especially in the evening or when you are suddenly directly exposed to light. 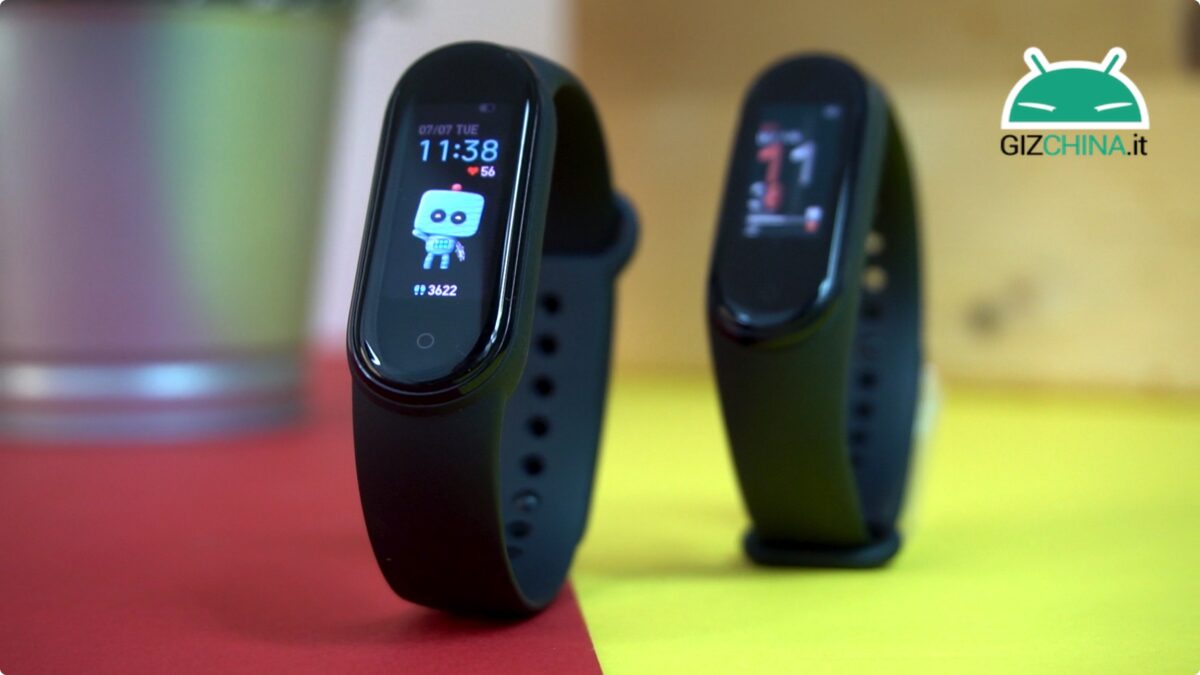 News also for the dials, which should have been enriched with over 100 new themes, but which apparently many of which are intended exclusively for the Chinese version of the product: incidentally, we have tried the Mi Band 5 Global version but without NFC module.

Although in fact when it comes to Xiaomi Mi Band, recharging is a procedure that must be carried out very few times a month, in reality one of the most annoying things of the Mi Band 4 was precisely having to extract it from the bracelet and then recharge it. Well, apparently Xiaomi's engineers immediately understood the problem, and with the Mi Band 5 they solved it by introducing a new magnetic charger. 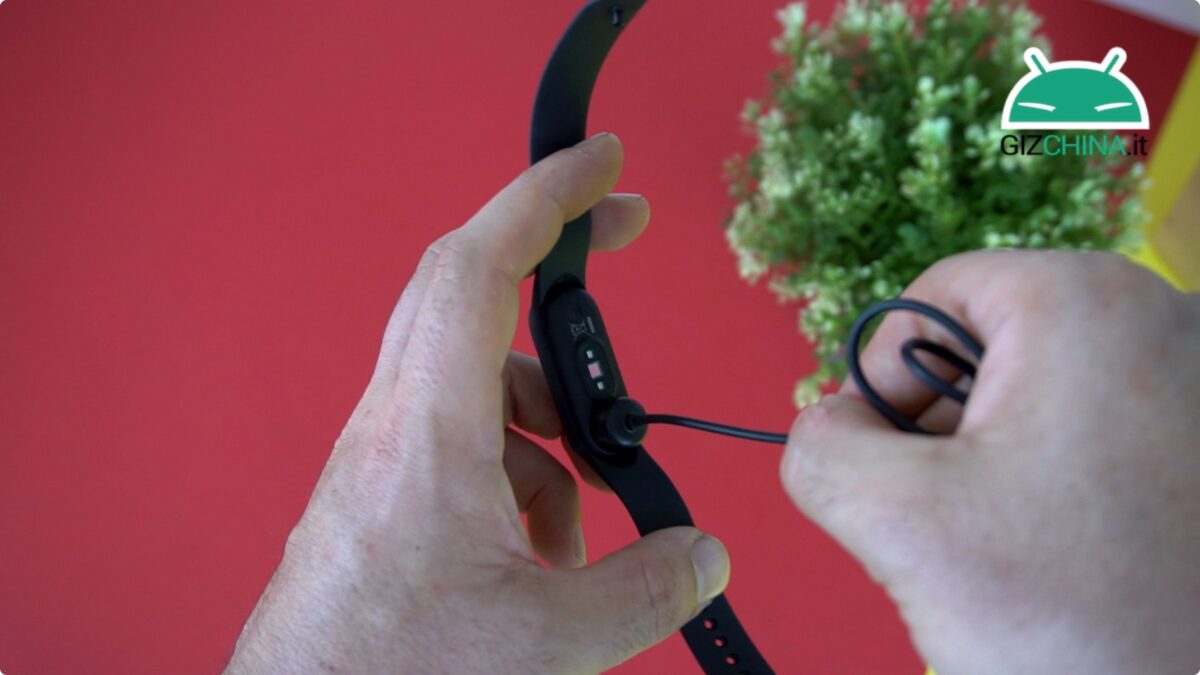 To reload the Mi Band 5 it will no longer be necessary to remove the tracker from the strap, but just bring the charger closer to the bottom of the smartband and let the strong magnet do all the work: in a few moments the connector will be connected to the traker and charging will begin.

Reload that however has not improved compared to the previous generation as regards times: to recharge the Mi Band 5 you need to wait for exactly the same amount of time that was necessary with the Mi Band 4.

The detected sports increase, the monitoring improves and the PAI score arrives

Always able to detect the new and always resistant up to 5 ATM, the Mi Band 5 increases the number of activities it is able to detect and offers a total of 11 sport (remember that the Mi Band 4 supported 6 different activities), which can be selected via the dedicated menu. I have not had the opportunity (and desire) to test all the available activities, but for the few that I have tested I have noticed a slight improvement in the detection, although it is not an improvement for which I would recommend recommending the upgrade from the Mi Band 4 a Mi Band 5. 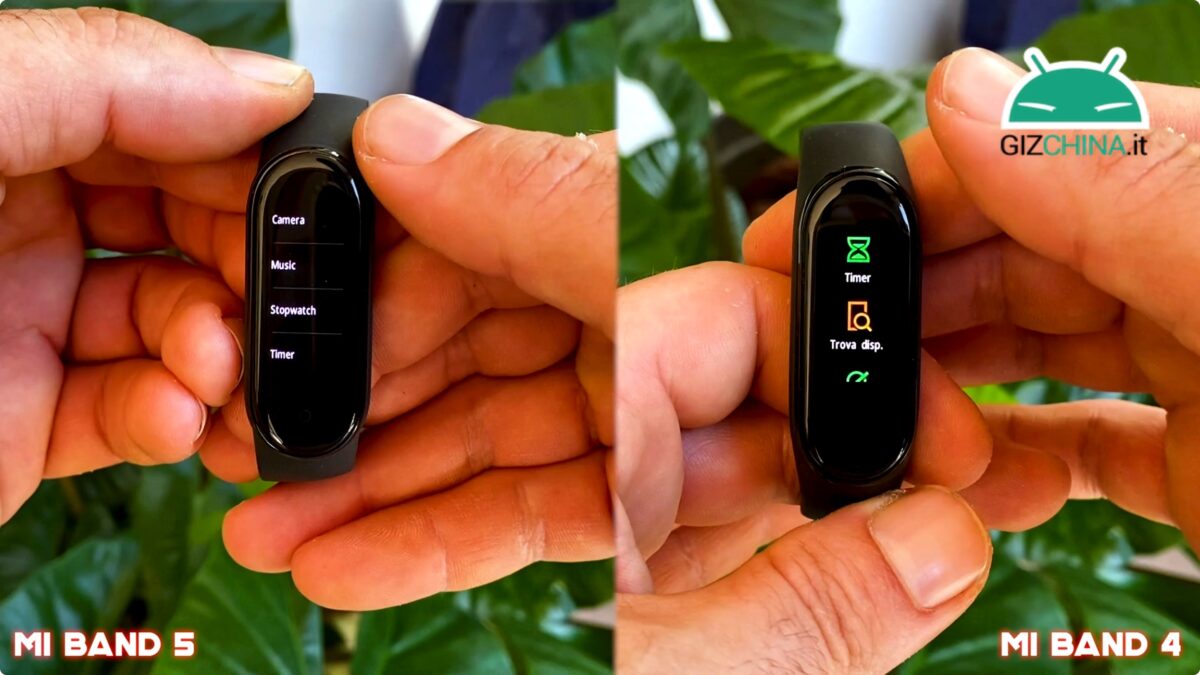 What has improved significantly, however, is the detection of sleep, which I found more accurate than the previous generation and which, by wearing the two smartbands at the same time, is actually able to detect details that remained unnoticed until the Mi Band 4.

But in addition to monitoring sports and sleep activities, the Mi Band 5 also integrates other health-related detections, including a more intelligent heart rate monitoring, stress test and monitoring of the female menstrual cycle. Many also awaited the introduction of the oximeter, but the detection of blood monitoring to this day still remains a mirage and in the current version of the Mi Band 5 is not available.

Heart rate monitoring (of sleep and activities) can be activated in automatic mode, allows the choice of the detection frequency and also integrates an abnormal heart rate warning, while the new system will test you for stress and PAI system they help users to assess their physical state, tangibly.

I remain doubtful about the accuracy of the PAI score, which basically works with the same concept that we saw in theAmazfit T-REX and in 'Amazfit bip s, but the system found that I am basically a mostly stressed out and out of shape person. And how to blame him.

The management of notifications of Mi Band 5 it is practically identical to what we saw in the fourth generation. With the new Xiaomi smart band you can access all the notifications received on the smartphone, which will be viewed individually but which will not allow any interaction. In short, if you are wondering no, there is still no possibility to reply to the messages received, but it is clear that with such a small display it is perhaps better this way. 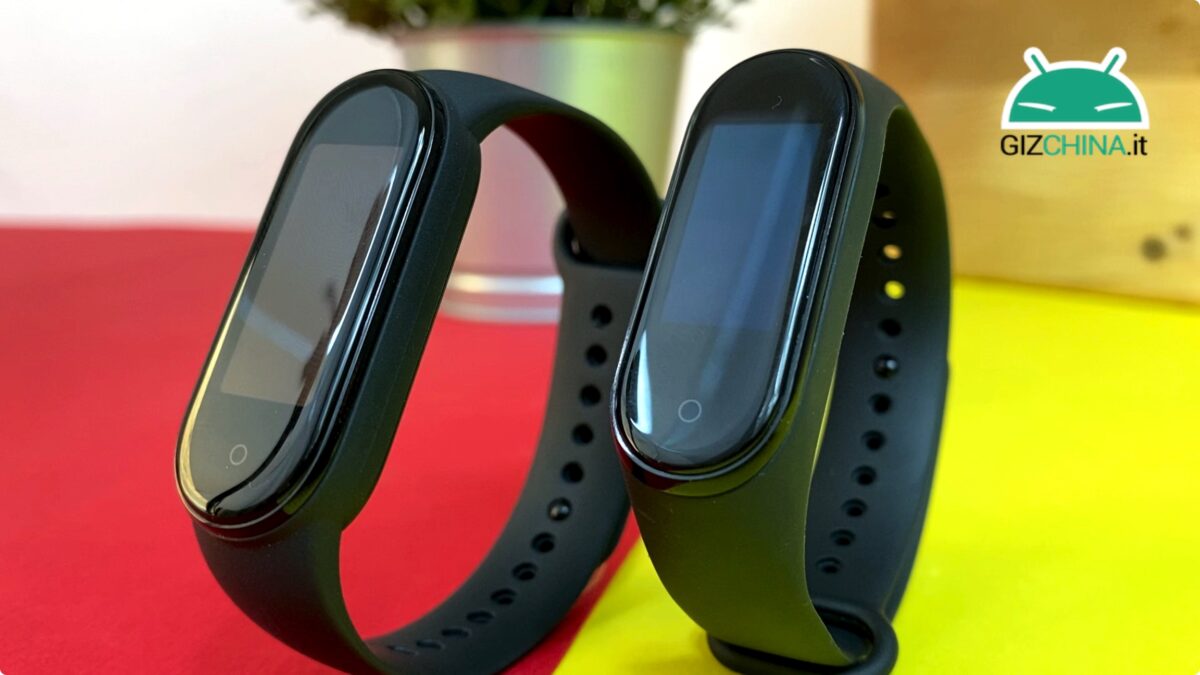 On the issue of NFC to date the situation is still poco clear. What is certain is that the Mi Band 5 in its global version it will be available both with and without NFC, but what remains doubts is the real usefulness of the thing. In Russia, for example, even the Mi Band 4 with NFC can be used for contactless payments via the Mastercard circuit, but as far as Italy is concerned, nothing is still.

It is therefore plausible that even the Mi Band 5 with NFC, could be used in the Bel Paese exclusively with the turnstiles of public transport, such as the subway or even buses, and it can hardly be used for contactless mobile payments. We'll see.

In addition to being one of the most interesting economic trackers of the moment, the Mi Band 5 it also integrates a new feature that could appeal to lone travelers, or to those who always go out as a couple and then find no one to whom to entrust the arduous task of taking a photograph: it can be used as remote control for the camera. 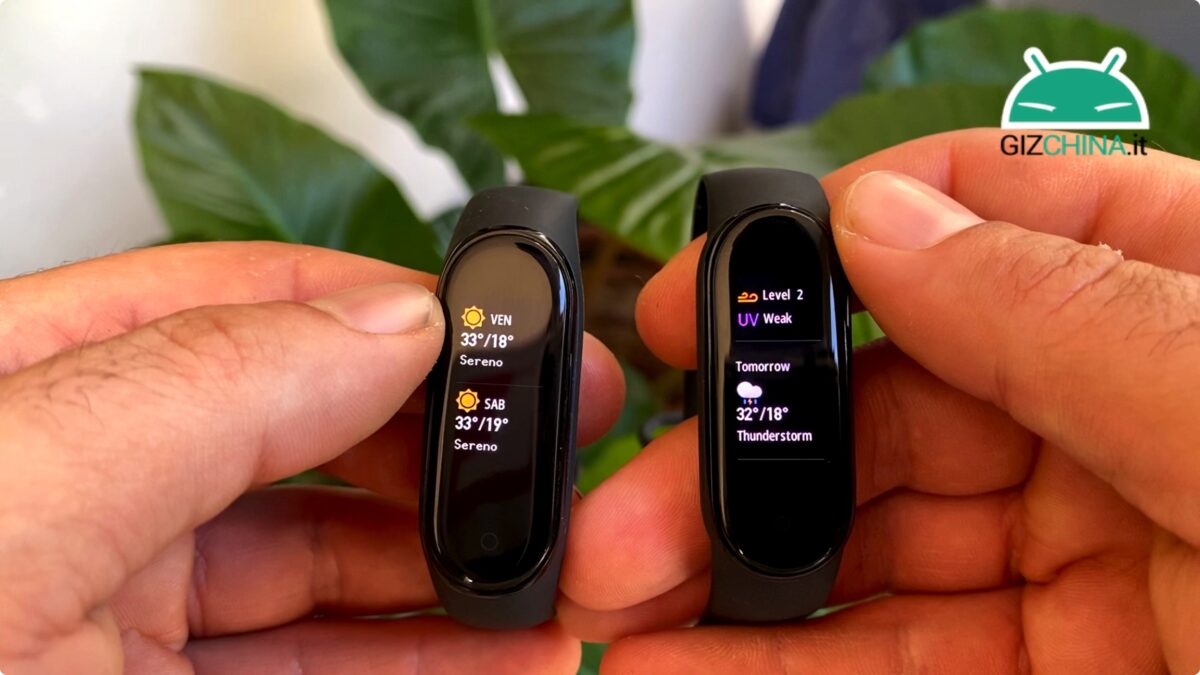 Let's be clear, it still does not allow you to manage the recording of videos, but by starting the camera app and the relative function on the smartband, you can use it to take a remote photograph. A novelty as simple as it is comfortable, especially in the case of group photos or for taking photographs using the features of astrophotography, which require a perfectly still smartphone.

The autonomy of the battery integrated in the Xiaomi Mi Band 5 it is about 15 days old, and is more or less in line with the previous generation. Of course, it is a value that can vary based on various factors, such as the set frequency relating to the detection of the heartbeat, the number of notifications displayed, how many times a physical activity is performed and much more. But for someone like me, who has activated strong heart rate tracking and practically never does sports, in about a week the battery has dropped by 43%. Which is not bad at all: with heart rate detection at maximum, and brightness at maximum, the autonomy will reach about 10 days.

What is the price of the Xiaomi Mi Band 5 in Italy?

As of this writing, the Xiaomi Mi Band 5 is not yet officially available in Italy. But it is still possible to buy it (find the link below) in its global version and taking advantage of our discount coupon GIZBAND5 at the price of 45 €. 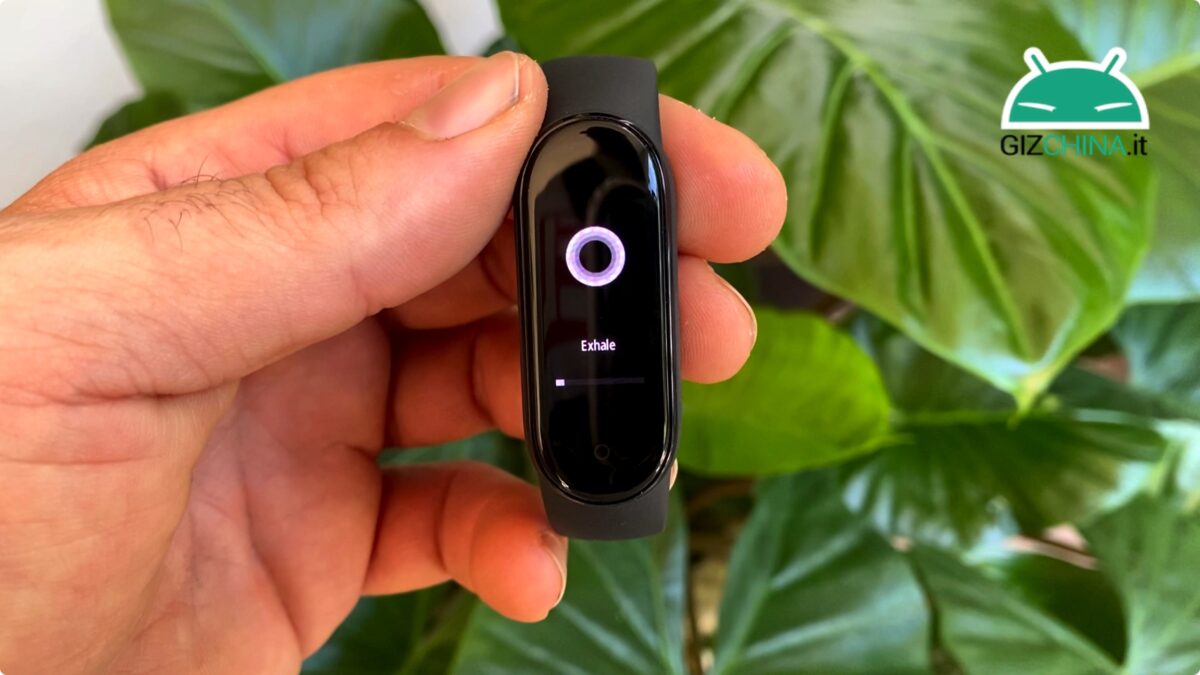 And the selling price in Italy of the Xiaomi Mi Band 5 not only is it mostly in line with that of the previous generation, but it is decidedly aggressive, especially considering the quality of the product and the integrated features, as well as - clearly - the improvements introduced with the fifth generation.

In short, on Xiaomi Mi Band 5 there poco to say. It is the worthy heir of the Mi Band 4, and improves and enriches it in some aspects that certainly will not seem revolutionary, but which in common use are decidedly pleasant: it is a smartband that does everything it has to do, indeed considering the detection of the oxygen in the blood maybe even more, and it does it absolutely well.

Xiaomi's smartband is, and probably will continue to be, one of the best economic alternatives on the market, and the slightly larger screen, as well as all the other innovations introduced, make it even more attractive. And if you are wondering, no, the new charger is not compatible with the previous generation and it is not possible to use a Mi Band 4 strap with the Mi Band 5: the tracker also enters the old bracelet, but tends to protrude perhaps too much.

Buy the Xiaomi Mi Band 5 Global in discount with our coupon!