Aluminum frame with folding structure, double disc brake, battery with great autonomy, Shimano 6-speed gearbox, new on-board computer and larger wheels. These are the characteristics of the new one Fiido D4s, the e-bike just presented by what could perhaps be called one of the most growing companies in the world of pedal-assisted bikes, which with the Fiido D3S and (above all) with the Fiido M1 has managed to get the word out here too in Italy, receiving many positive criticisms despite some shortcomings of its previous models.

And it is precisely on these shortcomings that the Shenzen company worked on designing the Fiido D4s: with the new electric bicycle comes a change in the design of the frame, of the larger wheels, an improved efficiency battery and the new on-board computer, at the usual economic price that distinguishes the Fiido models.

As for all the other electric bikes of the company, also the packaging of the Fiido D4s it is very important in size. Dimensions that are dictated by the fact that the Chinese electric bike arrives practically already assembled and will require the assembly of only some components, such as the saddle, the pedals and the rear reflector.

Very simple operations to complete, also thanks to the assembly kit included in the package which contains all the tools necessary for assembling the bicycle.

If you liked the design of the Fiido M1, then surely you will also appreciate that of the Fiido D4s. The style of the Chinese electric bike is very similar to that of the now famous electric fat bike and, to be honest, it loses (finally) that "Graziella" appearance in favor of much more aggressive forms. This change in design has led to a slight increase in size, which however does not affect the convenience of storing it in the luggage rack of your car: a comfortable and easy operation also thanks to the weight of 18.8 Kg.

However, the handle positioned on the central barrel of the bike has been eliminated, which is also higher than the previous models of the "D" series by Fiido, and the front and rear mudguards have also been eliminated. The strange management of the company's cables continues to be present, which are always visible and, in some cases, are held together by simple clamps that will lead, by opening and closing the bike, to lose the order that is found as soon as it is unpacked the bicycle and which, perhaps, are the element that most connect the Fiido D4s to an economic folding electric bike, especially as regards those positioned in front of the handlebar. 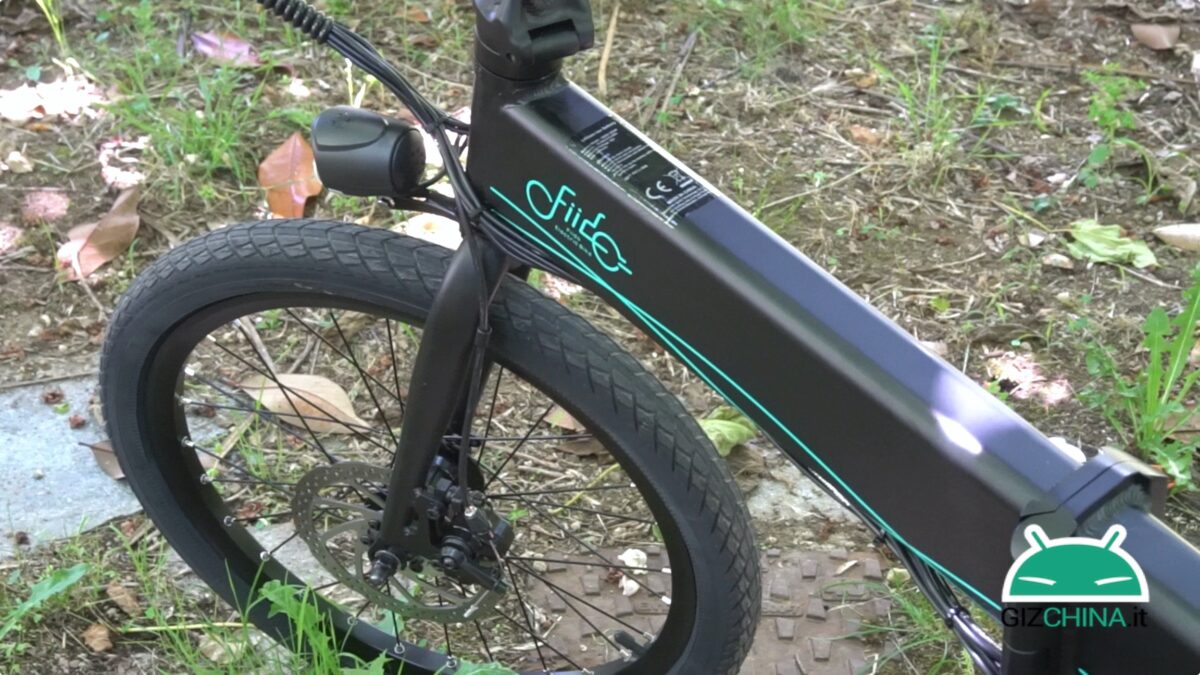 The battery module has been positioned in the central barrel, but it is not removable and no keys are needed to start the system: everything will be manageable from the new on-board computer of Fiido, the one (precisely) also seen in the Fiido M1, under the which are located the button for the horn, and the one to turn the front LED light on or off.

The rear shock is also abandoned, and it is a lack that despite the decidedly larger wheels compared to previous models (and to the average of the other bikes in this price range) it is slightly felt especially on uneven road surfaces.

The engine is a 250w brushless, very powerful and snappy, which was joined by a 6-speed Shimano gearie with a 52 tooth front crown, therefore quite large. The change is always precise, fast and reliable and is managed by a click selector located on the right side of the handlebar. And it is right on the right side of the handlebar that there is also the accelerator to be able to ride the bike in "full electric" mode but that, remember, in Italy it is not allowed to use on electric bikes: the concept of operation is identical to that of an electric scooter, just push the lever and reach the maximum speed of 25 km / h. Speed ​​which, in reality, is limited to 25 Km / h due to European Union regulations, but which in reality could reach 31 Km / h (and yes, it is possible to "unlock" this limitation with a very simple trick). 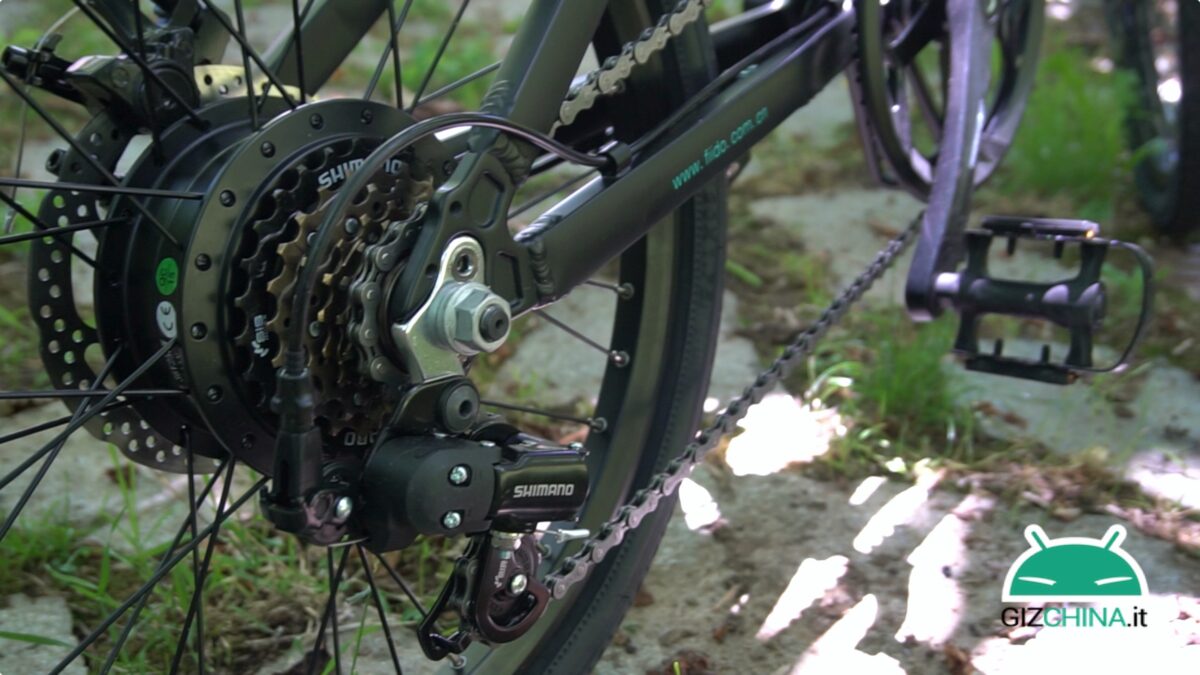 Maybe, but the presence of the accelerator buffers a little the absence of the torque sensor and the fact that the electric motor starts to assist the pedaling only on the fifth turn of the pedals: having the possibility of receiving assistance at the start is a godsend sky above all uphill, or if you forgot to downshift.

Even in this model there are three pedaling modes and are managed by the on-board computer of the electric bike, in which the current speed and the kilometers covered in the current session will also be visible. 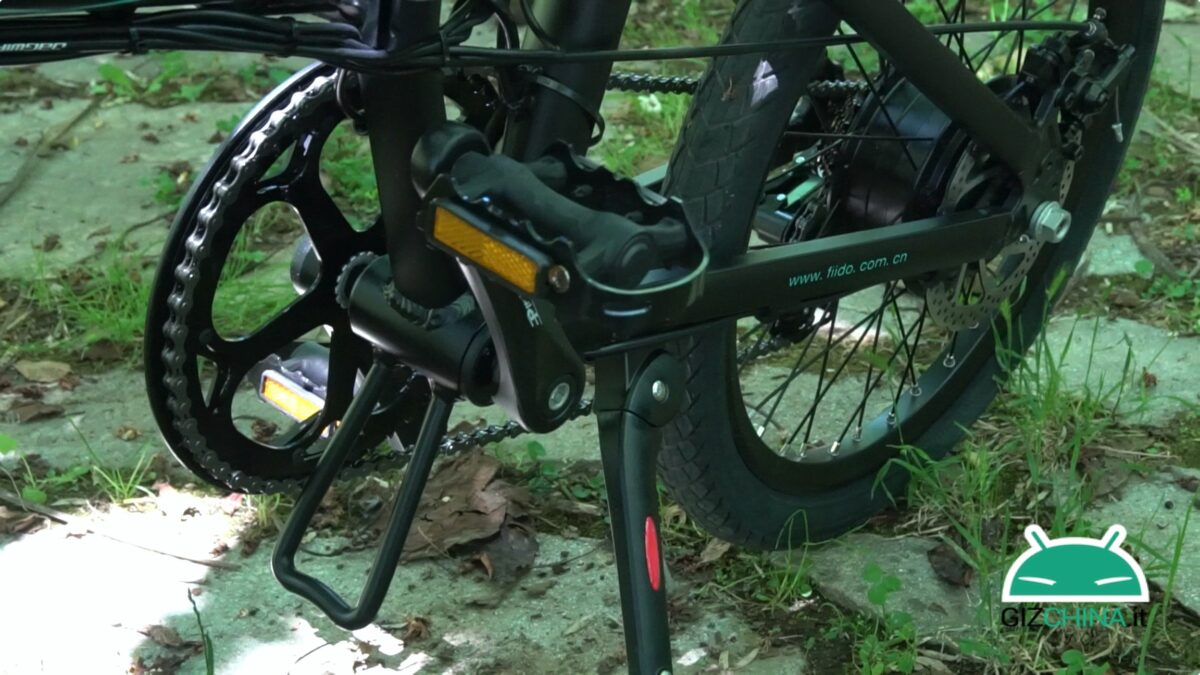 However, and once again, the torque sensor is missing, which makes it perhaps a little too difficult to manage the starts especially if you are in assistance mode 3: it is as if the engine cannot detect the force that is being given to the pedals, let alone the current speed and to the fifth pedaling, when you start pedaling assistance, it could happen to start like a splinter, just because the 250w brushless gives all its power suddenly.

The battery of the Fiido D4s is lithium and, according to the company, should guarantee about 500 charging cycles and a maximum range of 80 km with minimal pedal assistance. In my tests, however, I managed to get to about 70 Km with the M1 mode (i.e. the one with which the engine delivers 25% of its power), about 45 KM with the M3 mode (in which the engine delivers 75% of power) and just over 30 Km using it exclusively with the accelerator. Full charging, from 0 to 100%, takes place in about 7 hours via an external power supply which for my tastes has a cable that is far too short and uncomfortable to use in certain scenarios.

Once you have become familiar with the lack of the torque sensor and the decidedly impactful starts of the pedal assistance, drive the Fiido D4s it is a pleasure and the saddle is very comfortable even on less uniform road surfaces. The wheels from 20 inches they make themselves felt and guarantee to those in the saddle a feeling of stability very different from that transmitted by the models with smaller wheels. 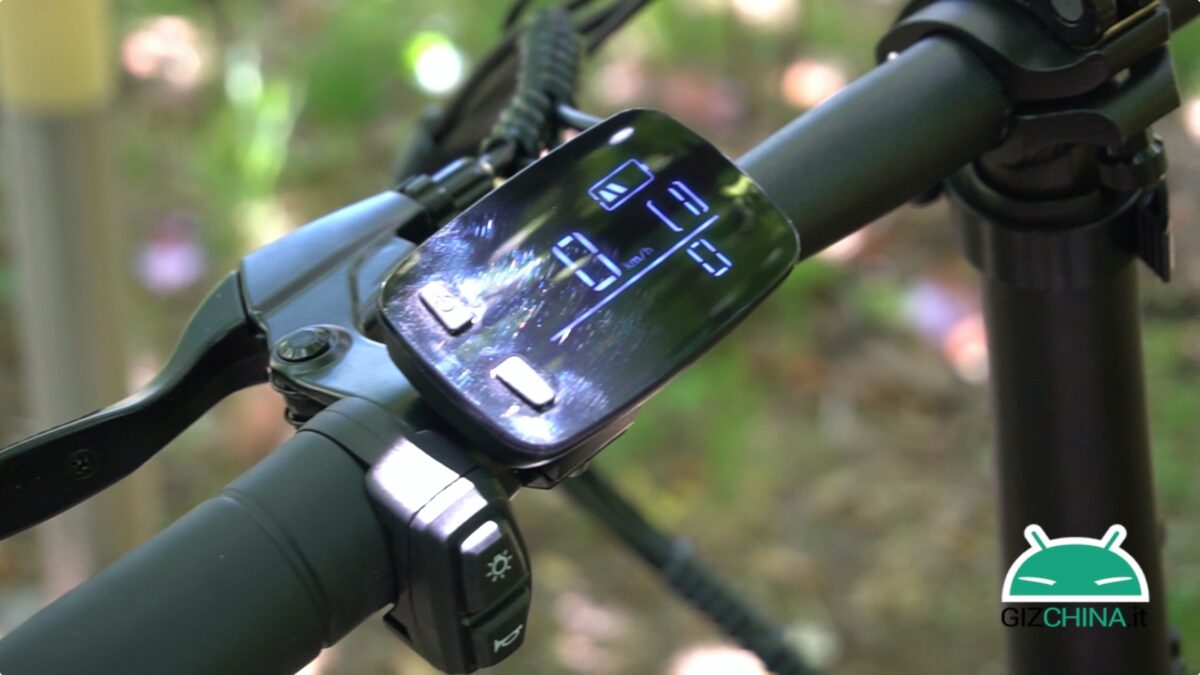 Sure, you feel a bit missing the shock absorbers, but with the right pressure in the tires and thanks to the decidedly soft seat and very comfortable shape, the cushioning will be more than enough to ride this bike in the city.

Good i two disc brakes, although I noticed that they tend to flex slightly when braking with a lot of force, but still manage to guarantee a well balanced and decisive braking as needed.

In short, all in all the driving experience with the Fiido D4s it is pleasant in every respect, the positioning and the height of the rod also make getting on and off the saddle easy, and the larger wheels make the electric bike even easier for the city.

The current Italian legislation regulates e-bikes by setting posts that companies must respect to ensure that their products can circulate in the Bel Paese without the need for a license and insurance. Under Italian law, an electric bicycle must not exceed 25 km / h and it doesn't have to be equipped with a fully electric mode.

And if for the first bond with the Fiido D4s (which is a CE and FCC trademark) there are no problems, we cannot say so with regard to the full-electric mode which is not allowed in Italy. The reality is that to date there is no clear regulation regarding this particular functionality, but in fact the accelerator should not be there, so theoretically it would be necessary to inhibit its use. Although personally I find it very comfortable especially at the start. 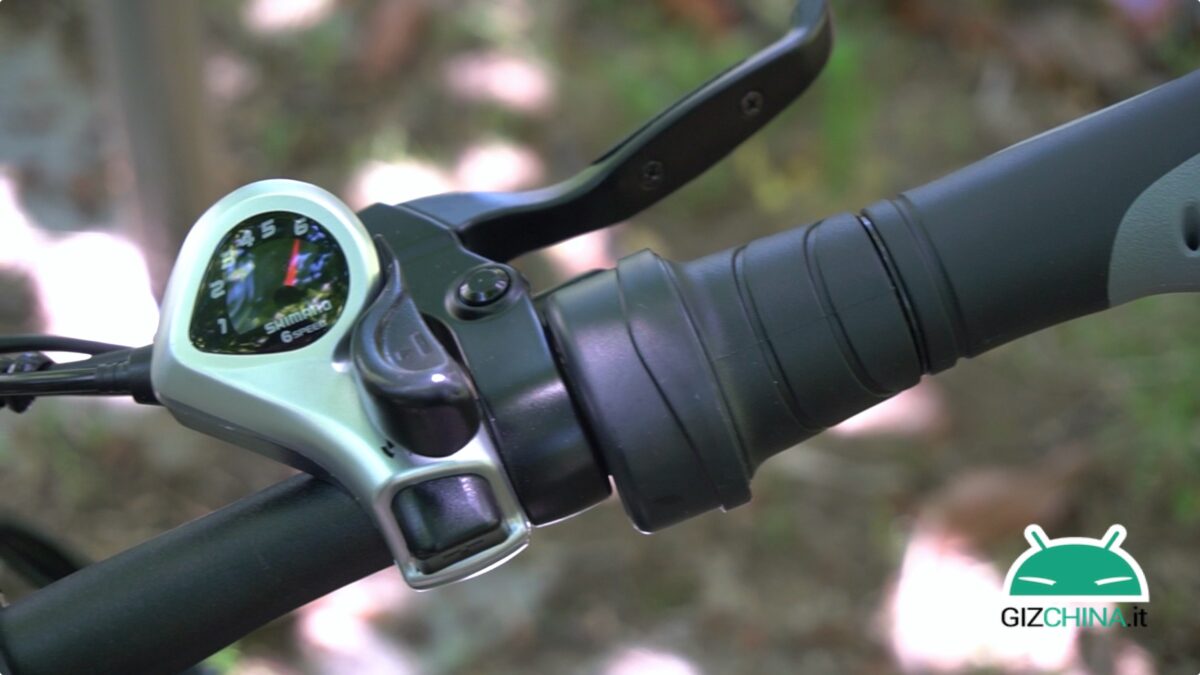 Il price of the Fiido D4s is $ 699 (i.e. about 620 euros). Price that drops during the international launch of the electric bike and that with the our coupon 7bcdf9 could decrease even more. And it is a decidedly aggressive price, which definitely raises the bar of the quality / price ratio of the new Fiido bike.

Larger wheels, battery with excellent autonomy, disc brakes, relatively small weight and size and new on-board computer, make the Fiido D4s one of the most interesting electric bicycles for anyone who wants to move around the city independently and respecting the environment. 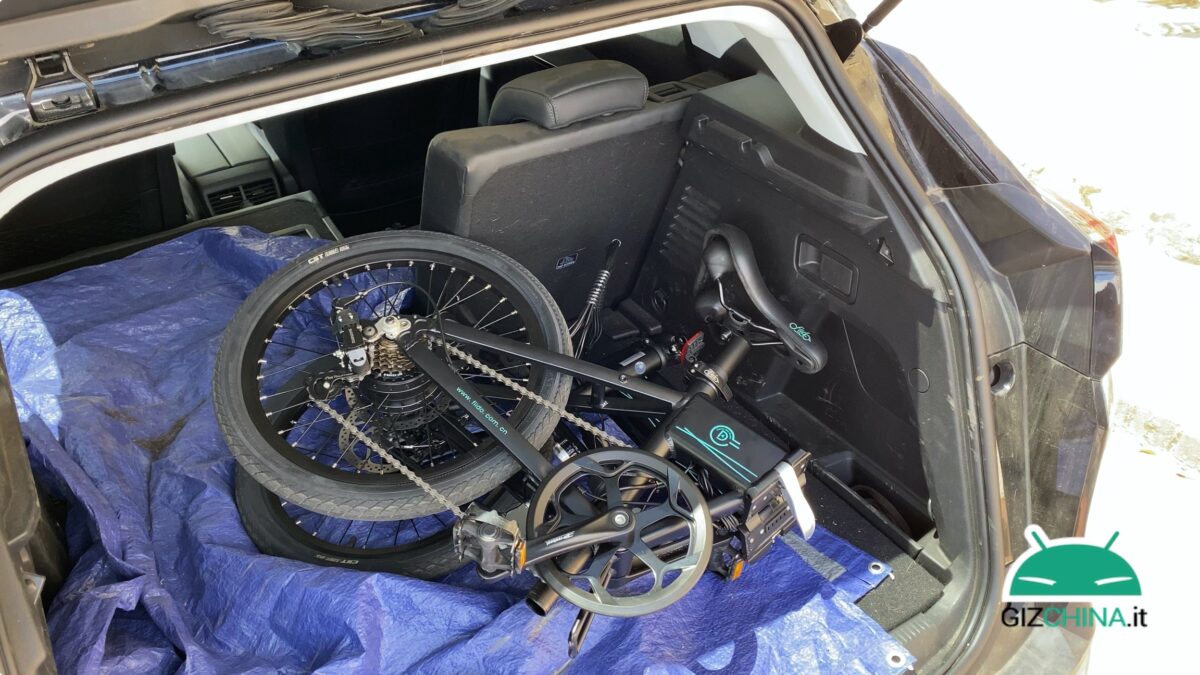 Of course, the absence of the torque sensor could make it a little longer to get used to the propulsion at the start, and you will need to remember to climb and start with mode 1, but all in all it is a compact, complete and very electric bike pleasant to ride: in short, if you are looking for an economic pedal assisted bike with good design and excellent handling, then you will have to insert the Fiido D4s among the models to be evaluated.

Buy the new Fiido D4s at a discount with our coupon!