In today's review we will see the new ones Tronsmart Onyx Ace, a pair of true wireless headphones not in ear fromexcellent value for money and that many have asked us to analyze. In fact, these are found very often at approx 22 € from China, but thanks to ours exclusive coupons we found them about 26 euros from Italy! Will such a low price be enough to make them excellent headphones? Let's find out together within the article.

The sales package is rather aesthetically cared for and inside we find the following equipment:

I will leave immediately from CASE​ because, although the dimensions are perfect to put it in your pocket (48 x 23 x 57.5 mm), the design does not drive me crazy because of the silver plastic band that gives a feeling of economic product. In fact it is, but in general they seem to be worth more than what they cost. 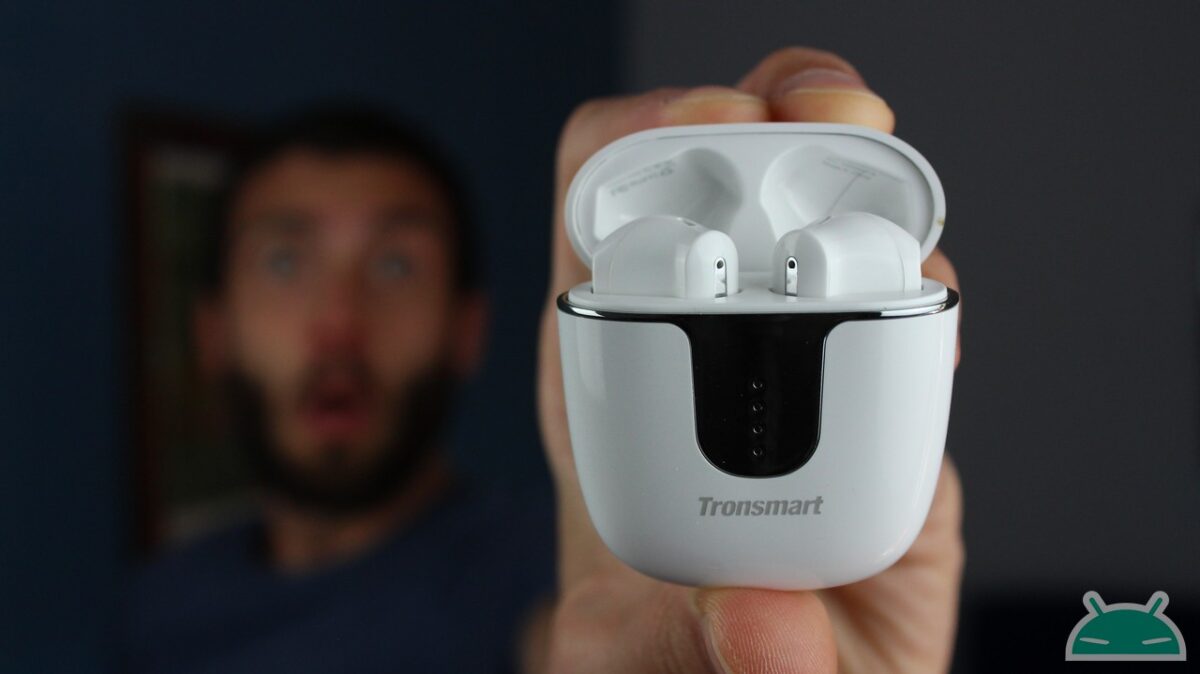 Despite the appearance, even the door with magnetic closure tends to dance a little and we see that we are talking about low-end headphones. Apart from these two points, the Tronsmart Onyx Ace they surprise with portability and functionality. 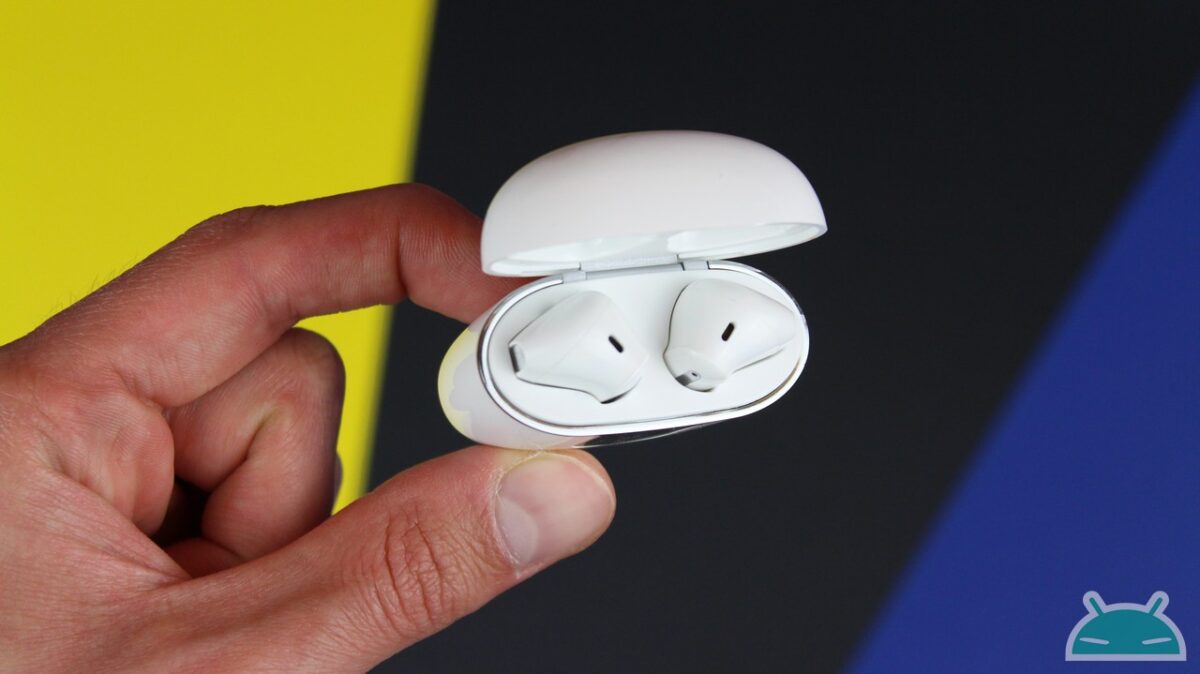 In fact, always on the front we have gods LED which indicate the charging status of the headphones and the case, while the USB Type-C port is present below. Going into more detail, the charging dock will also indicate which headset is charging and at what point of the charge it is, in fact, the right headphone will be represented by the first two LEDs at the top and the left one by the first two at the bottom. 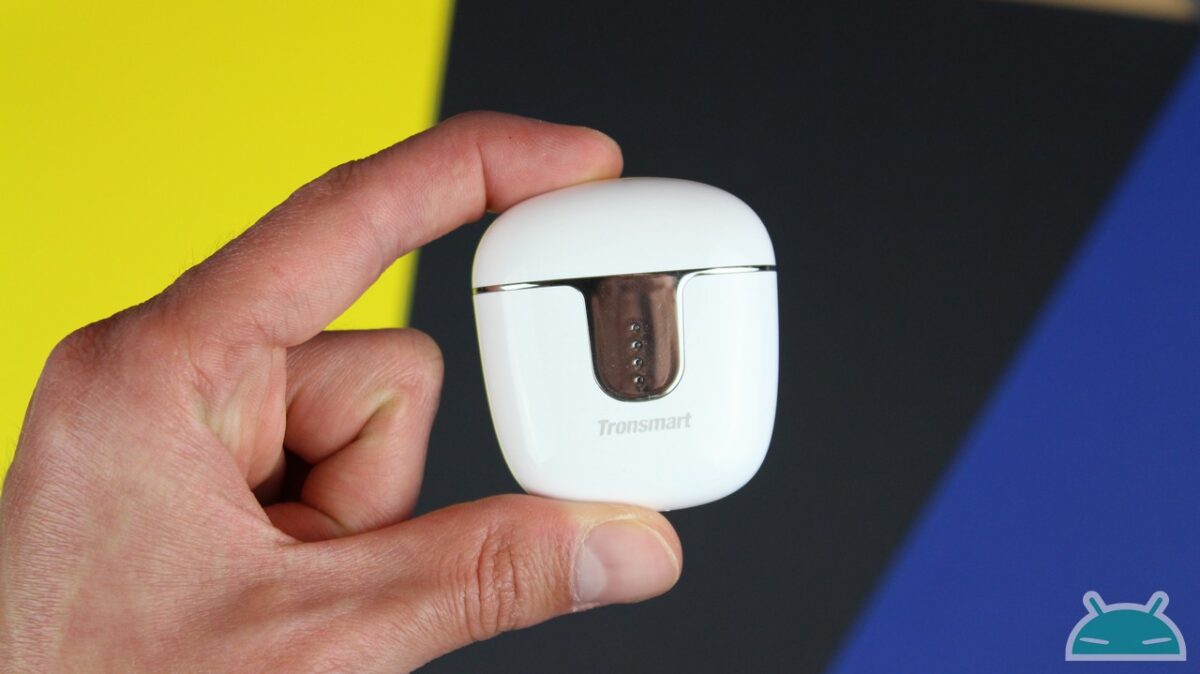 The headphones instead are semi-in-ear and they are quite small in size. The design remember a little le AirPods, but have a flat rather than rounded stem and generally manage to remain firmly in the ear even during running sessions.

I personally found them very comfortable, also because I don't like in-ear solutions and with them I am much more comfortable. As if that wasn't enough, they own one IPX5 certification which will make them resistant to raindrops or sweat. 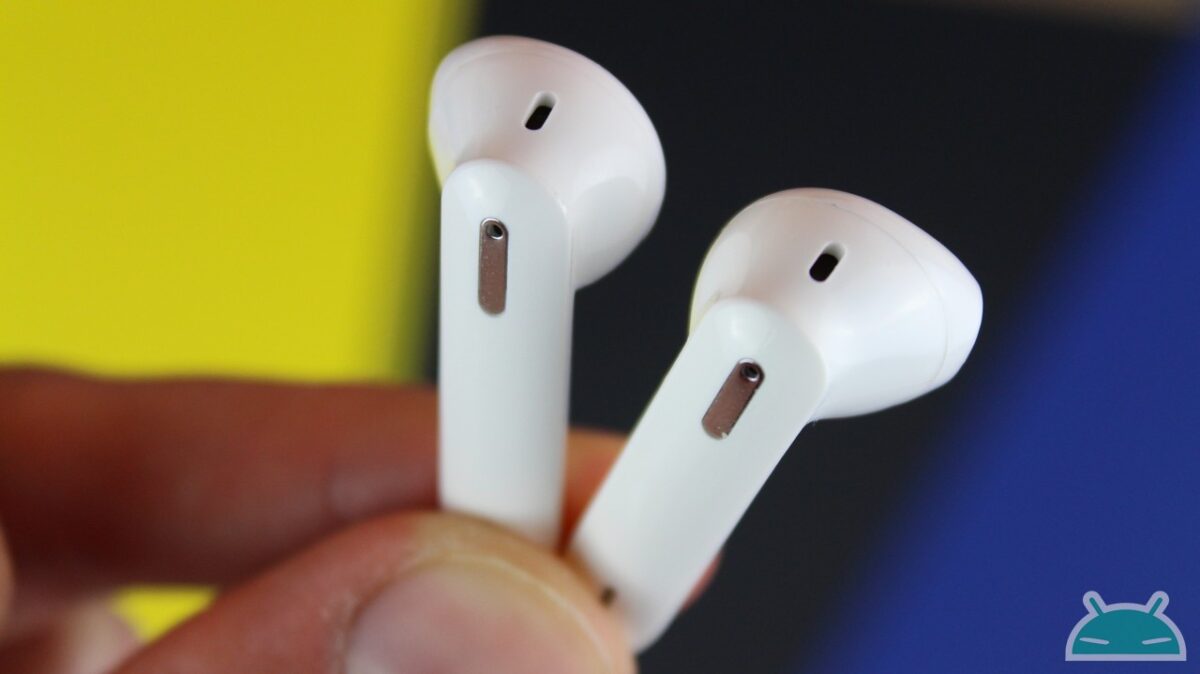 Earphones also have gods LED on the stem that indicate the connection status and also several are supported gestures:

I make a clarification for the last two items, because the headphones automatically turn on once taken out of the case and turn off on their own once placed in the case, but if you want to force these two commands you can do it that way.

Excellent however the possibility of raise and lower the volume directly from the headphones, so that you don't have to touch the smartphone in the least. In addition, there is the mono mode that will allow us to use even just one, placing the other in the case. Obviously in that case we will lose the functionality associated with that single headset. 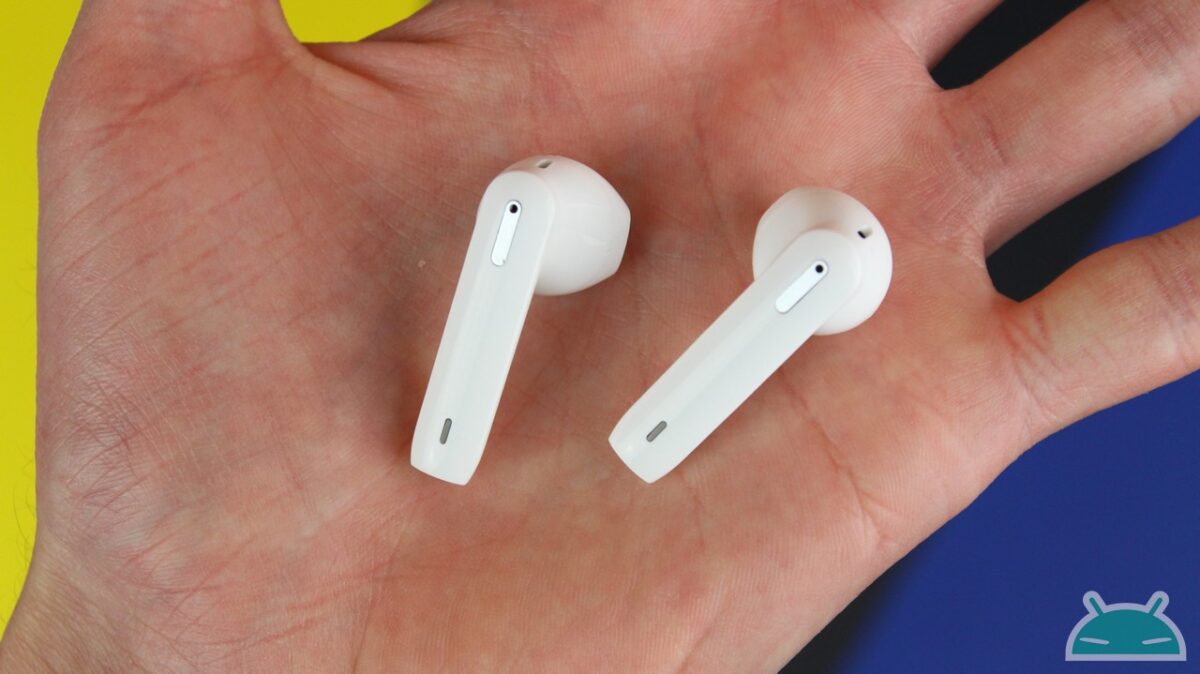 On Tronsmart Onyx Ace we do not find a proximity sensor which will stop playback every time we remove one, but in this price range I do not feel like defining it as a defect, since it is a feature present on headphones sold at about twice the size.

Le Tronsmart Onyx Ace have Bluetooth 5.0 with Qualcomm QCC3020 chip with support toaptX, AAC ed SBC and that's not at all discounted on headphones from around 22 €in fact, they represent a plus against the many competitors. 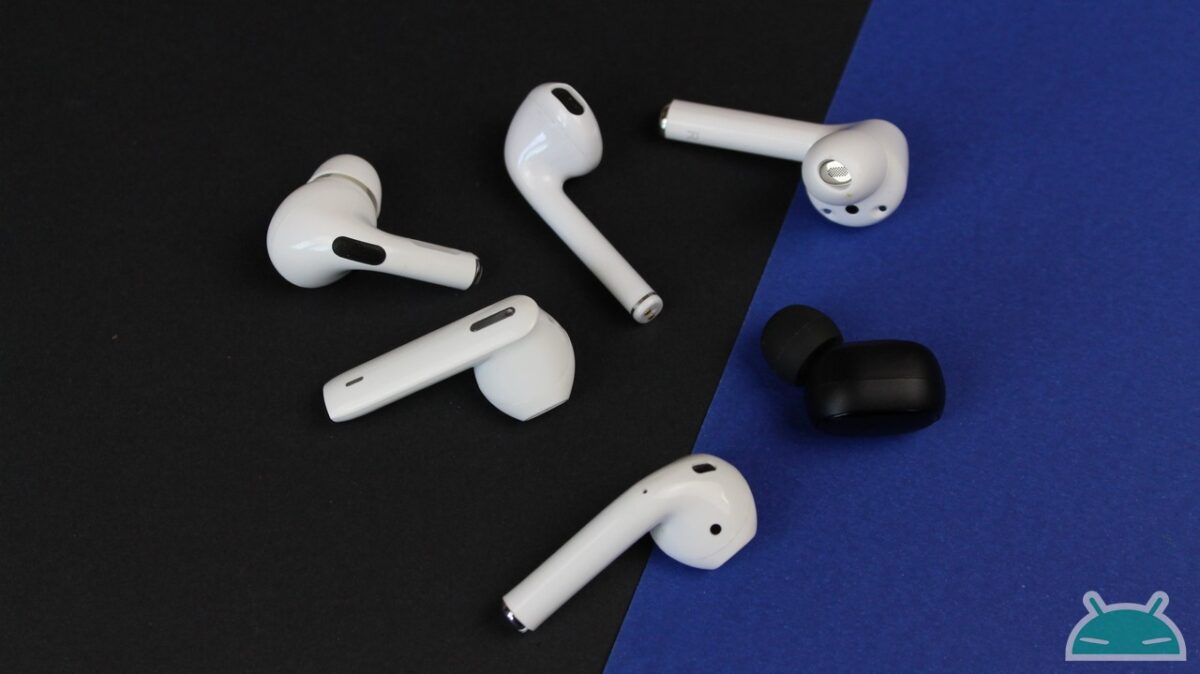 To carry out the first connection with the smartphone it will be really easy because just open the case and the earphones will enter pairing mode. Then go to the Bluetooth settings of your smartphone and select the Onyx Ace. End.

For all other times it will only be necessary open the case and in maximum a second will already be paired. I was pleasantly surprised by this aspect because I tried more complicated and less functional 50 euro headphones. Just think of some clones of AirPods who often have problems of this type and are slow at this stage. 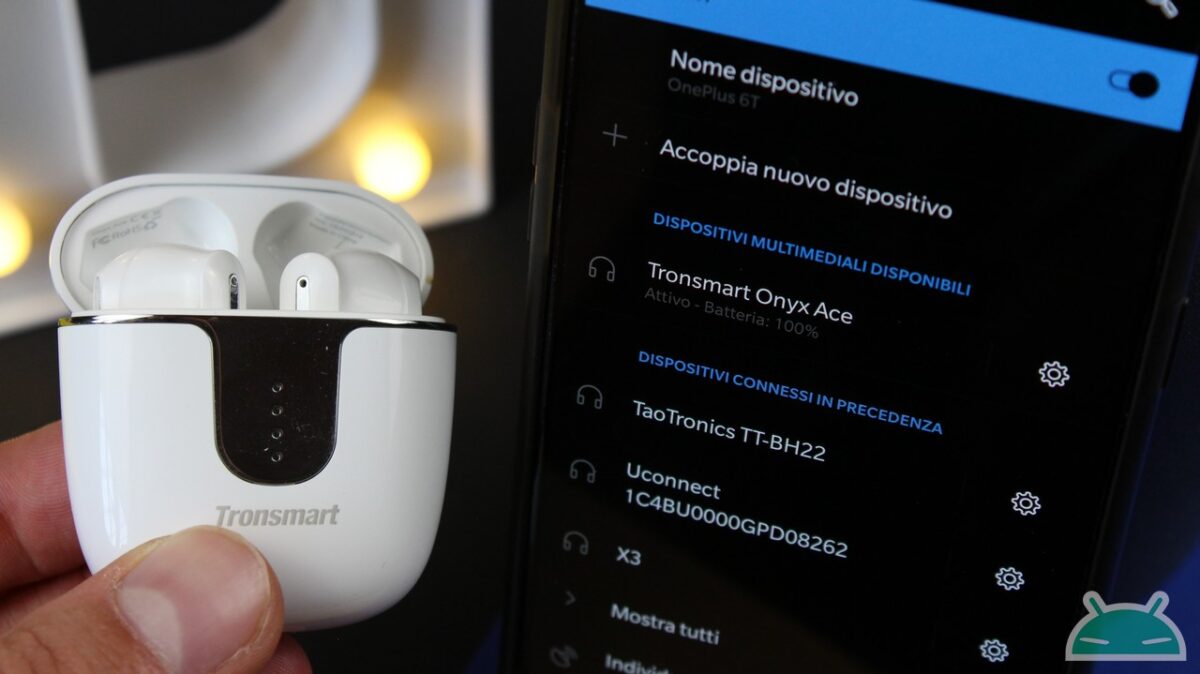 Turning now to latency I must say that they behave very well in the vision of film o video and there is no delay between sound and images, but I cannot say the same during the Gaming. In fact, I tested the Tronsmart with PUBG and unfortunately it is found a few fractions of a second of latency. Generally speaking, you can play, but if you are looking for headphones exclusively for gaming then you will have to turn to something else.

Le Tronsmart Onyx Ace they can count on well 4 microphones it's a noise cancellation ENC (Environment Noise Cancellation), therefore not active. Well, this is perhaps the aspect that surprised me most of all, because the audio captured by the microphones is crystal clear in quiet places and in any case above average in noisy places. 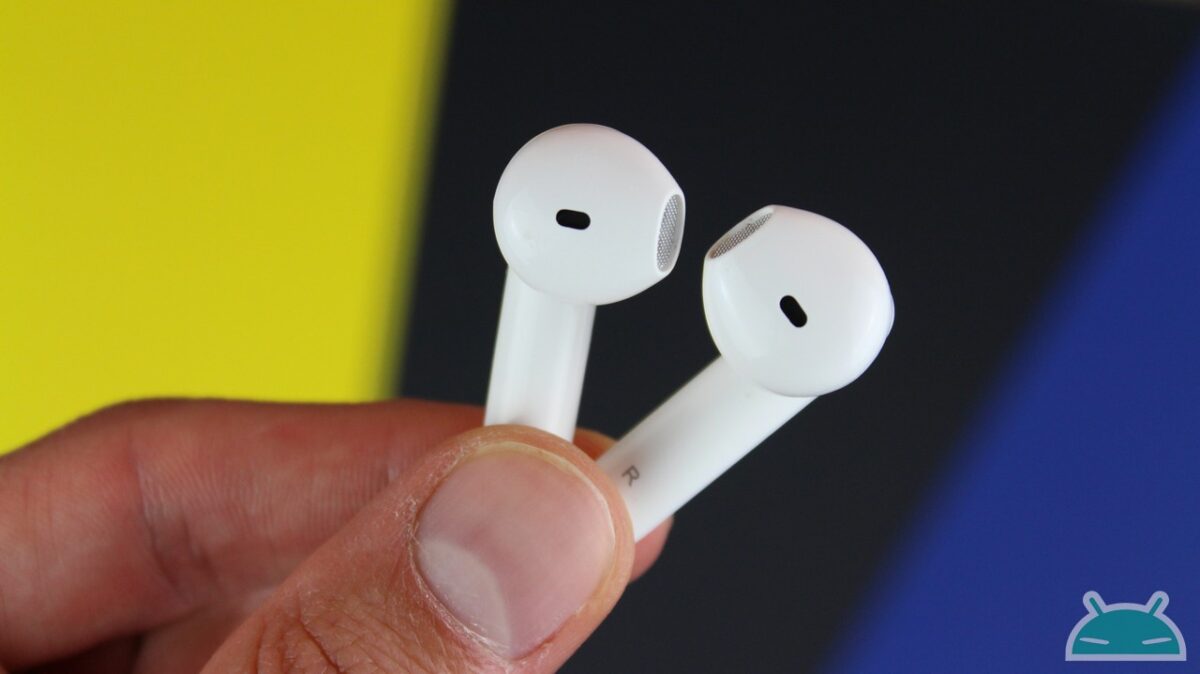 The noise cancellation works quite well and we will be able to talk to the other person without too many problems, despite the fact that we still hear a little background noise.

I feel like compare them headphones from approx 60 € and I'm not kidding, watch the video for a comparison with the Realme Buds Air and with Xiaomi Mi Air 2S, as well as with the Redmi AirDots S which are found at roughly the same price, but which have a disastrous microphone.

For its price range Tronsmart Onyx Ace they behave very well thanks to a very high volume and a good balance of frequencies, although at maximum volume the bass tends to distort a little'. Let's say that the price limit is a bit felt here, but in general it is difficult to find better.

Comparing them with the Redmi AirDots S., very close in price, these have a better balance of frequencies, but a slightly lower volume. Despite this we have better insulation since we are talking about in-ear headphones and overall they guarantee a slightly higher listening experience. 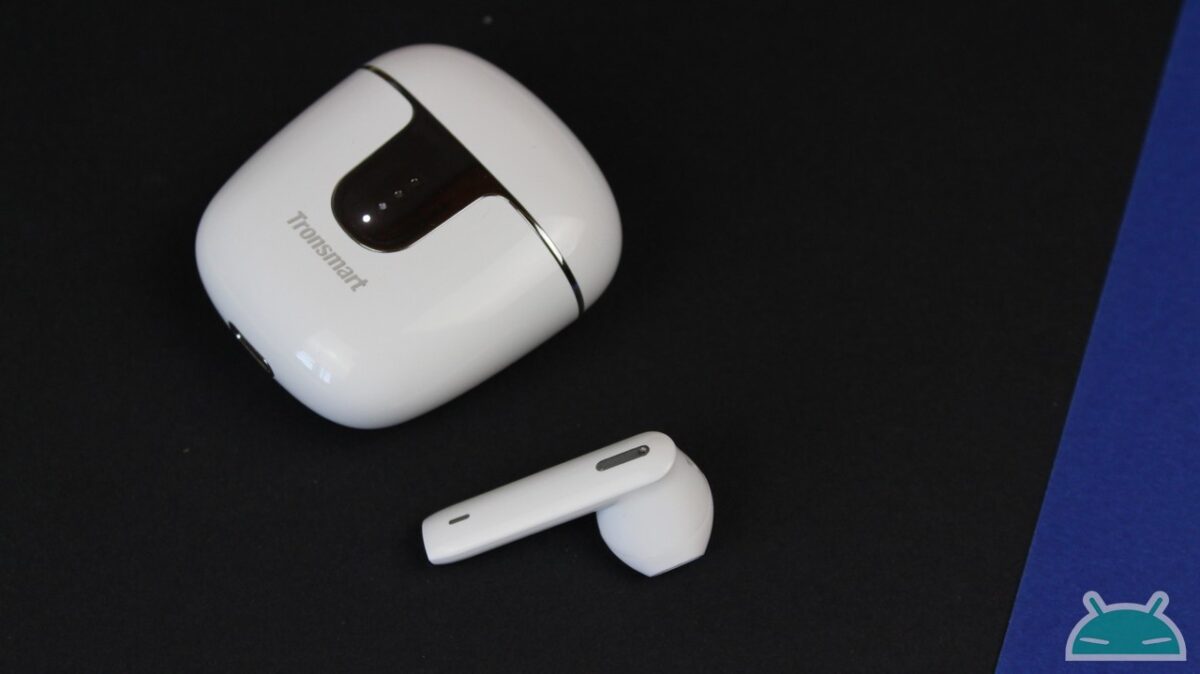 Le Tronsmart they are therefore a step below, but compared to the counterpart of Xiaomi have many more features. Let's say both are the best low-cost solutions for those looking for in-ear and semi-in-ear headphones.

If the CASE​ owns a battery from 400 mAh, headphones they have one from 40 mAh each that will allow us to have aexcellent autonomy. Indeed, with volume at 70% I managed to get up to 6 hours of continuous music playback, a result that I wasn't really expecting. Instead, there is good management of energy consumption by the chip Qualcomm.

When I first saw the price at which these were sold Tronsmart Onyx Ace I thought they were the usual TWS headphones economic full of problems and with just enough audio, but when I tried them I had to totally change my mind.

For those looking for non-ear headphones this is the best solution below the 30 euro, since thanks to our coupons that we share daily on our Telegram channels of GizDeals these are available on GeekBuying sent fromItaly only 26.9 € with the discount code "GIZDEALACE".

Excellent autonomy, excellent connectivity and sound quality in a crazy call, these are its main strengths, to which I would also like to add the very complete gestures.

Obviously if you want to opt for a super low-cost in-ear solution I still recommend the Redmi AirDots S., but for everyone else I recommend trying these Onyx Ace because you will not be disappointed.

Xiaomi takes care of the house with the new Vacuum-Mop robot ...