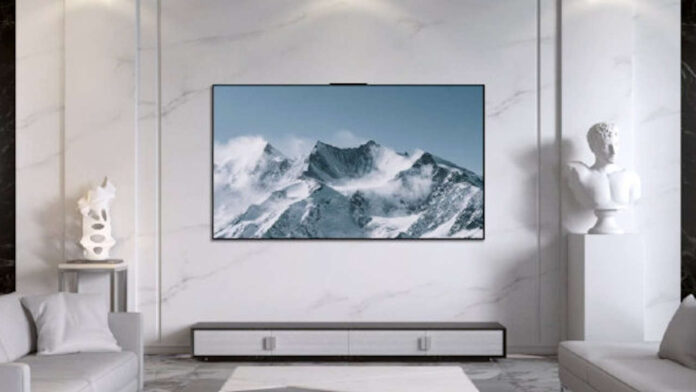 As scheduled, the official presentation of the Huawei P40 family was held in China today. The keynote did not focus only on smartphones, also launching the Huawei Vision X65. The new smart TV had already been spotted in recent days and now we have it in front of our eyes, at least in the form of images and specifications. For the moment, the Huawei home TV series are struggling to get out of China, focusing on expansion first into the mother country. A strategy similar to that of rival Xiaomi, only now officially present in Europe after years of success in China.

The launch of the Huawei Vision X65 represents in all respects the separation of its proposal into two different series. In 2019 there was the launch of the V series, consisting of 3 models with LCD and diagonal panels ranging from 55 ″ to 75 ″. The new arrival slips right in the middle, taking advantage of a screen from 65 " whose main novelty is the technology used. No more LCD: Huawei enters the world of OLED, increasingly appreciated by the public.

Again led by the proprietary OS HongMeng, the Huawei Vision X65 can boast a premium construction, only thick 24.9mm. The front has also been optimized, with as few bezels as possible, in favor of the screen-to-body ratio. Inside there is a heart made up ofHonghu 898, new proprietary chipset designed specifically for OLEDs. With the help of a multi-channel sensor it is able to adjust the color and responsiveness of the display, adjusting the brightness in real time and returning more realistic colors. The certification TÜV Rheinland it is present, so as to safeguard the health of the eyes by keeping them as far away from the blue lights.

In support of this there are 6 / 128 GB of memory, narrowing the dividing line between smart TV and smartphone. Also because Huawei's intention is to make smart TVs a key element of the IoT ecosystem of its products. This is also thanks to the renewed retractable camera, with a 24 MP wide angle. In synergy with the double NPU integrated, the AI ​​functions have been further enhanced, starting from control gestures to physically interact with.

The audio sector was also taken care of, relying on 14 speaker from the wide sound field, with support for 5.1 channels and 3D effect. The plant is capable of map the room through audio waves, consequently adjusting the spatiality of the audio scene.

Needless to say, all these functions, combined with OLED technology, make the Huawei Vision X65 the product by far more expensive than ever for the company. It will take around 24.999 yuan 3250€, with availability not yet officially revealed.

Xiaomi invites you to dance with the My House Party event, in ...

Huawei Video: the fight on YouTube passes through Dailymotion