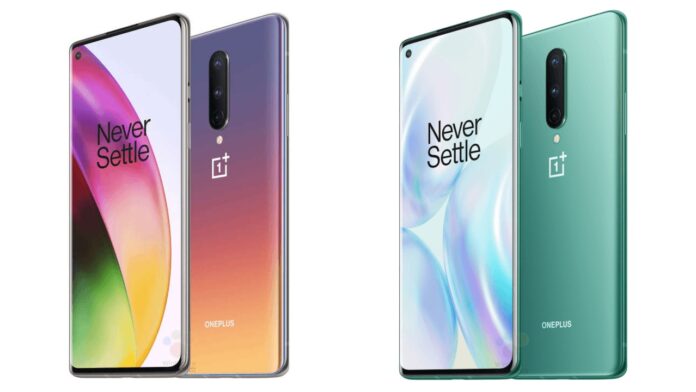 OnePlus herself admitted it, by want to dare more with the aesthetics of their smartphones. We will already see it with OnePlus 8, whose colors could surprise all those who are used to the minimalism to which the company has accustomed us. Except for the first historical OnePlus One, even available in Bamboo, all subsequent OnePlus have always been fairly conservative side colors. In reality, each model has had a less traditional version since 2017: Lava Red for OP5T, Silk White for OP6, Thunder Purple for OP6T and Almond for OP7 Pro.

Upgrade 01 / 04: now there are also the colors of OP8 Pro, you can find them in the dedicated article.

It must be said, however, that those just mentioned were all not so extravagant colors. With OnePlus 8 there will be an adaptation to the current panorama, increasingly colorful, although the extremes of OnePlus Concept One. As evidenced by the new leak of WinFuture, the basic model of OnePlus 8 will have two new versions: That Glacial Green, previously unveiled, and the unpublished Interstellar Glow.

The latter will be the most bizarre, at least for OnePlus standards, with a rather extreme gradient, from violet to orange passing through bright pink. A color never seen before on a smartphone and that will satisfy those who are looking for a phone with original colors. Alternatively, there will also be a more classic version Onyx Black for lovers of total black. We don't know if these 3 variants will also be there for OnePlus 8 Pro, but it is highly likely. Also because the green renders previously ticked related to the Pro model.

What we find out from these renders is that OnePlus 8 will also adopt one curved display, no longer exclusive only to the Pro. No more notches, then, with the selfie camera embedded in the screen at the top left. You can also appreciate the new logo in the lower part of the back cover, in addition to the arrangement of the triple camera arranged vertically.