Contrary to what claimed until last October, 2020 could be the year for the return in the mid-range for OnePlus. For some months, in fact, there has been a more concrete rumor that, in addition to 8 and 8 Proalso exists OnePlus 8 Lite. Not only with airborne rumors, but with real images, therefore the probability is quite high. That's why in this article we want to illustrate everything we know about the data sheet, price and release date.

READ MORE:
OPPO, OnePlus and Realme revolution: together for a proprietary chipset?

OnePlus 8 Lite: everything you need to know

He started talking about the existence of OnePlus 8 Lite OnLeaks, with gods render unofficial which are hardly denied by reality, if not for some small detail. The images tell us about a smartphone made of glass and metal, which stands out from the higher models.

In front of OnePlus 8 Lite there is a perforated display, with selfie camera which, however, is not on the side but well centered. The rumors indicate the presence of an S-AMOLED screen from 6.4 "Full HD + (2400 x 1080 pixels), also with a refresh rate of 90 Hz. On the back, then, there is one triple camera not central but in a rectangular box at the top left. CEO Pete Lau has "spoken" about his existence, showing it to the most attentive eyes these live photos. 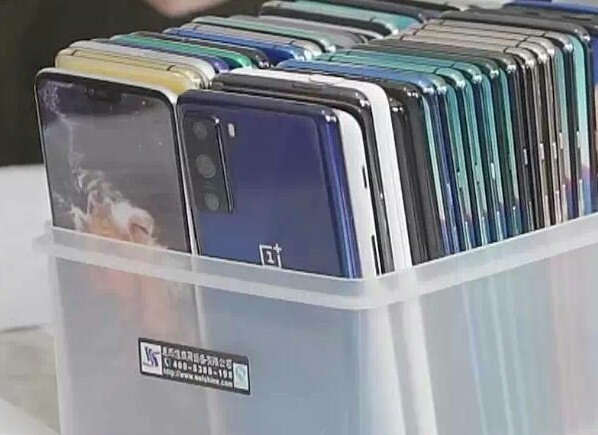 Speaking of technical specifications, OnePlus 8 Lite should sport it Snapdragon 765G produced by Qualcomm. Made at 7 nm, it contains a 475 GHz Kryo 2.4 octa-core CPU and an Adreno 620 GPU. There is another rumor that, however, speculates the presence of the MediaTek Dimensity 1000: in this case the 7 nm SoC has an ARM Cortex-A76 octa-core CPU at 2.0 GHz and an ARM Mali-G74 GPU.

The triple camera of OnePlus 8 Lite should include sensors from 48 + 16 + 12 MP, with primary Sony IMX586, equipped with Pixel Binning. The other two sensors would be a wide angle and a telephoto lens, although the latter we doubt that it will find space on a smaller model. For the selfie camera, however, there is talk of a Sony IMX471 from 16 MP.

Almost certainly OnePlus 8 Lite should be presented together with the higher models. As for the price, a launch is rumored around 2999/3299 yuan, approximately 399 / 429 €.