Every so often it happens that the social media manager of a company Android you are wrong and, for errors, you post something using a iPhone. It happened with an advertisement for Huawei with Gal Gadot, it happened with an advertisement for Google and several other times. You may not know it, but several times we happened to see an iPhone at trade shows and events at competing companies in Cupertino. And now it is also the turn of Madhav Sheth, or the CEO of Realme, fall into this pitfall.

Does it make sense to use an iPhone if you are a manager of another rival company? 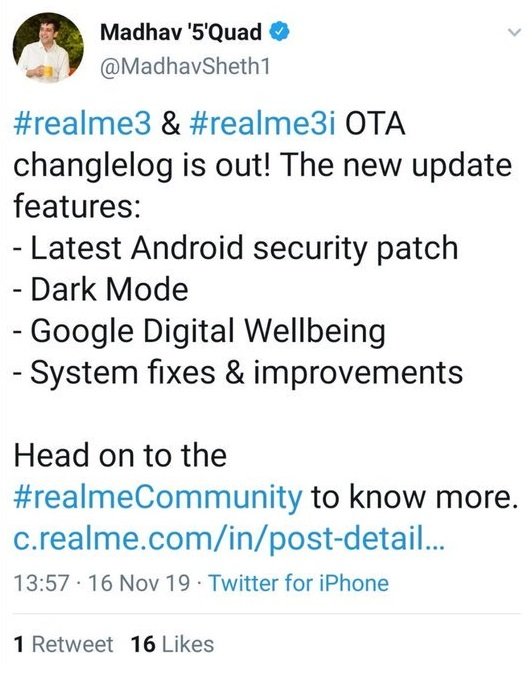 Last 16 November posted a tweet about a new OTA update that came on board Realme 3 and Realme 3i, released particularly in India. But what has caught the eye of most users is the writing that you can see at the bottom next to the date. The wording "Twitter for iPhone"Did not leave any chance for the CEO of Realme who, having been cornered, was forced to remove the tweet, pretending nothing. But that didn't stop someone from catching the crime in the screenshot in question.

In his defense we could say that apps usually work better on iOS. Consequently, for those who work with social networks and various apps, it may be more convenient to shoot with two phones, one representative and one for work tasks, including posting for social media. This is the "fault" of the intrinsic nature of Android which, living in an extremely fragmented world, cannot be optimized as much as Apple's OS. What is certain is that if the producers themselves began to limit the number of models put on the market, the situation could only benefit them.