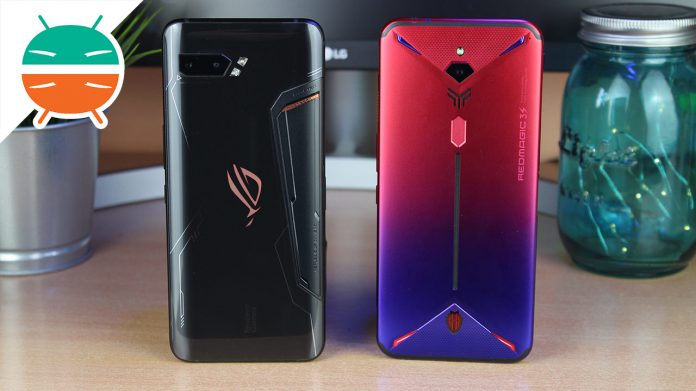 In comparison of today we will analyze two very recent devices that want to compete for the title of best gaming smartphone, we are talking more in detail about ASUS ROG Phone 2 e Nubia Red Magic 3S. We have individually tested these smartphones and both have shown us their best sides and those in which they sin most, but in this comparison which of the two will win? Let's find out together!

In order not to lengthen the article with continuous numbers we will leave the technical sheets of both devices below, so that they can be compared much faster.

Both are gaming smartphones, so both of them have a very particular aesthetic, appealing and not suitable for a formal environment, although in this case theASUS ROG Phone 2 be the most discrete and what I personally prefer. Indeed, the Nubia Red Magic 3S compared to the previous model it has not been changed in design, but only in the hardware, it is therefore self-evident that the look has remained longer backward compared to the Taiwanese counterpart due to a single camera and the fingerprint sensor on the back cover. 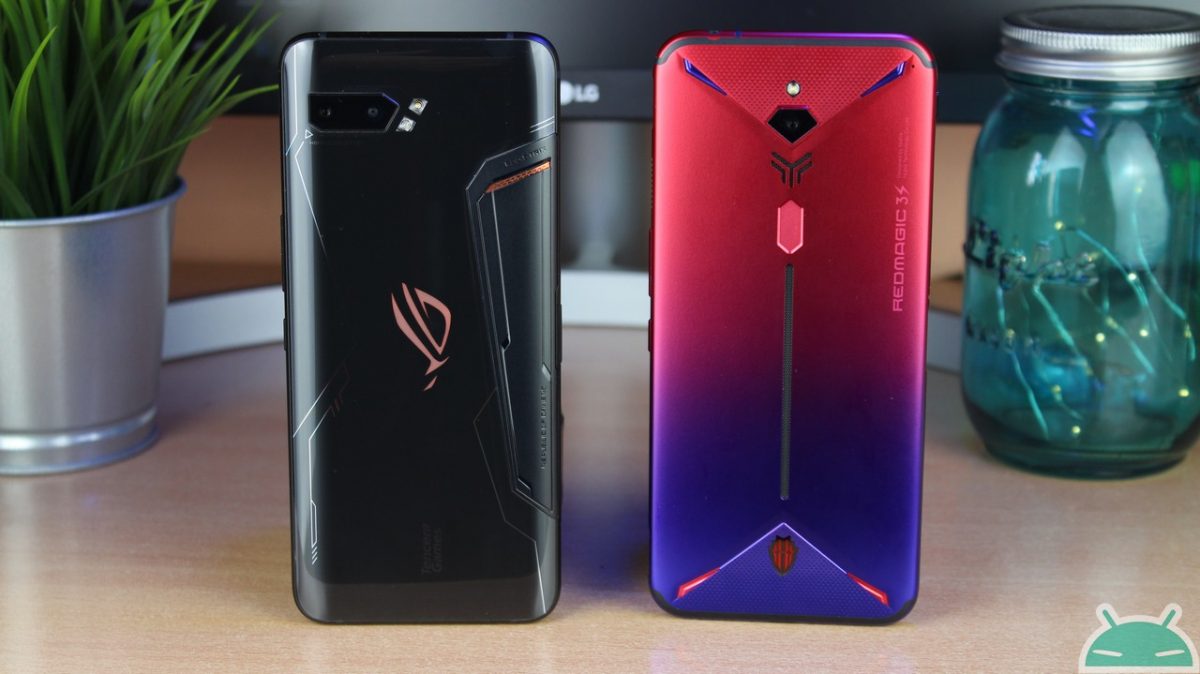 We know very well that the aesthetic tastes are strictly personal and therefore may not be similar to yours, but personally I find theASUS more refined and with one best attention to detail. Even the tactile sensation given by the materials confirms my impression, as while the Nubia Red Magic 3S is totally realized in satin aluminum, ROG Phone 2 it is in mirrored glass on the back cover and in solid aluminum along the side frame.

Although the two have rather similar dimensions theASUS has a more consistent weight compared to its rival, more precisely we talk about 240 grams against i 215 of Nubia. Obviously this does not mean that the difficulty in using one-handed is practically the same, although the glass back cover of the Taiwanese smartphone is more slippery than that of satin-finished aluminum Red Magic 3S. Exactly for this reason ASUS thought to insert the one hand mode inside the software, a gem that we do not find on board its rival. 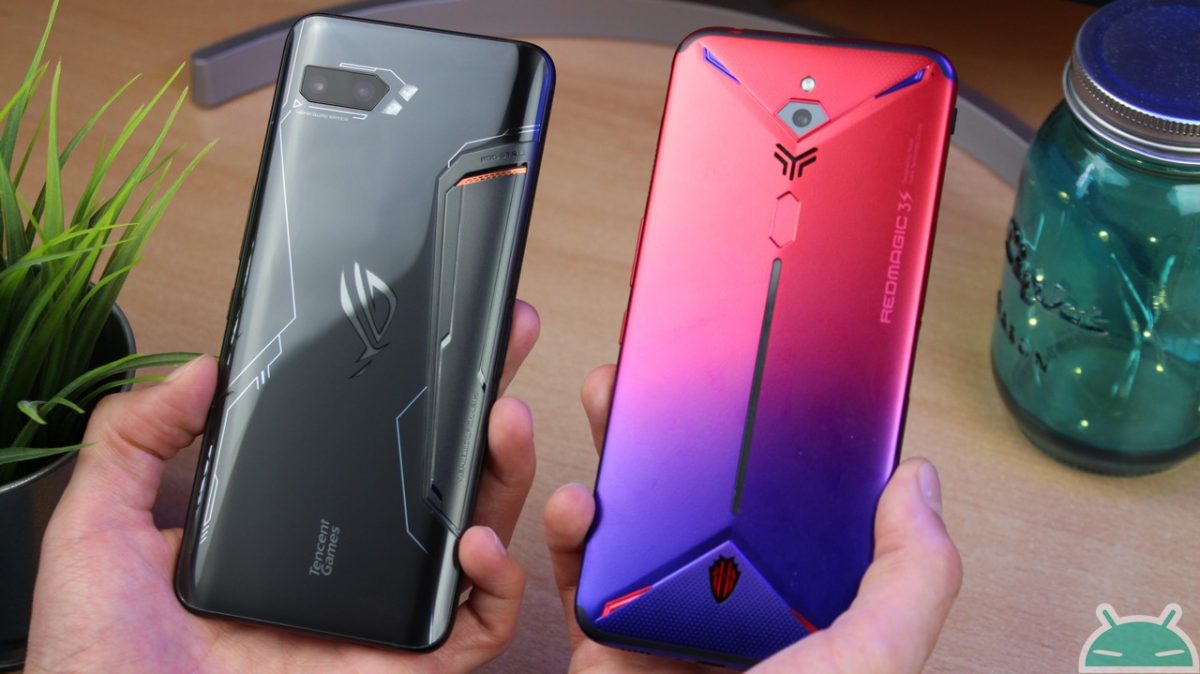 For the rest, let's look briefly at some common points:

Finally, I would also like to talk about the haptic feedback returned by smartphones, as the vibrations during gaming are good on the Nubia, but not as much as those onASUS which among other things are also found during the classic daily operations. It will seem to be holding a joystick.

Speaking of the I immediately show you the technical specifications so you can quickly compare them:

Both have different color mode, but comparing the standard I noticed slightly cooler colors on theASUS even if they are less opposed than the Nubia. Personally, I was more convinced of the chromatic range of the first one, while they play on equal terms in terms of maximum brightness. 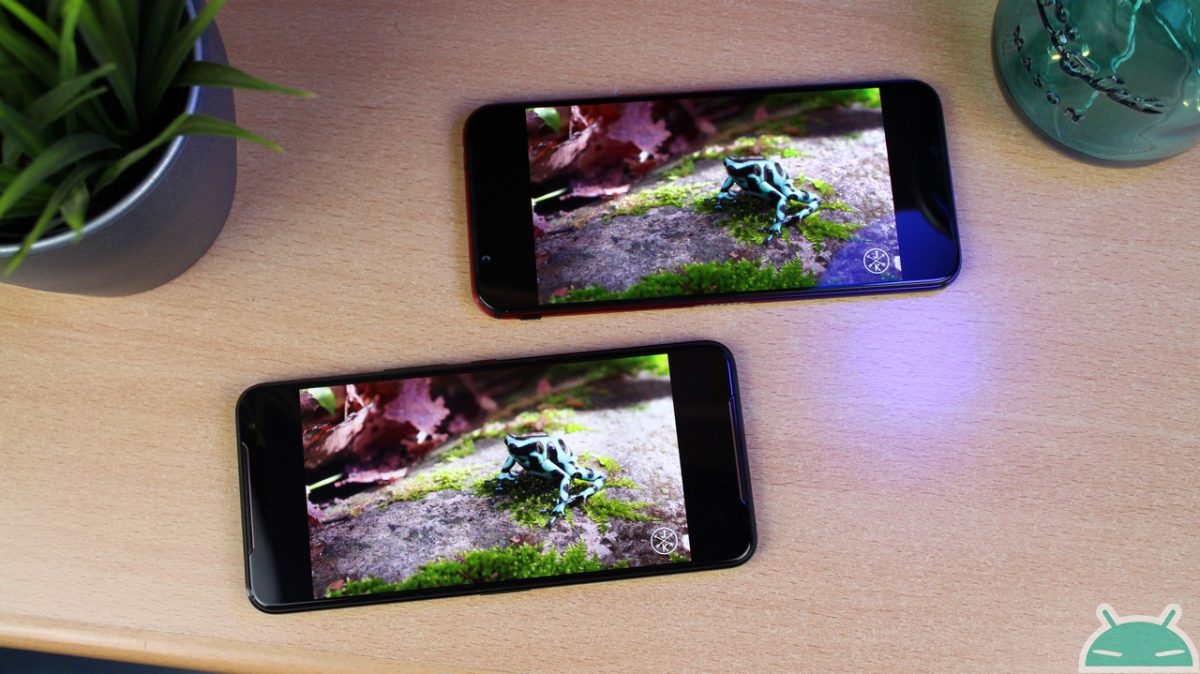 One of the main features of these smartphones is thehigh update frequency of the panels, which makes them perfect for the Gaming. Also in this case the ROG Phone 2 has the best thanks to his 120Hz, unthinkable on a smartphone, which guarantee a fluid experience, although it causes a greater energy expenditure, but this is not a problem since it has well 6000 mAh.

Moving on to the software with the related customizations it must be said that at the moment the Nubia still has some bugs that don't allow us to switch between clear mode and Dark Mode, forcing us to use the first one, while for the rest we don't find theAlways-On display, but only the Ambient Display which is activated upon receipt of notifications. On the contrary the ROG it is full of customizations, without defects, except that theAOD does not show notifications.

Being two devices presented recently, both are powered by the latest entry into the home Qualcomm, Or the Qualcomm Snapdragon 855 +, which is inclusive of an octa-core processor maximum clock frequency of 2.96 GHz and a GPU Adreno 640. The only thing that differs between the models in our possession are memory cuts, as well as the cooling system. The Nubia Red Magic 3S has a liquid cooling system assisted by one active fan which is noisy in the agitated phases, while theASUS ROG Phone 2 has the GameCool II cooling system, which includes a 3D steam chamber able to remove heat more effectively than the previous generation. The latter is much more silentindeed, even when the smartphone is under stress we do not hear any particular noises. 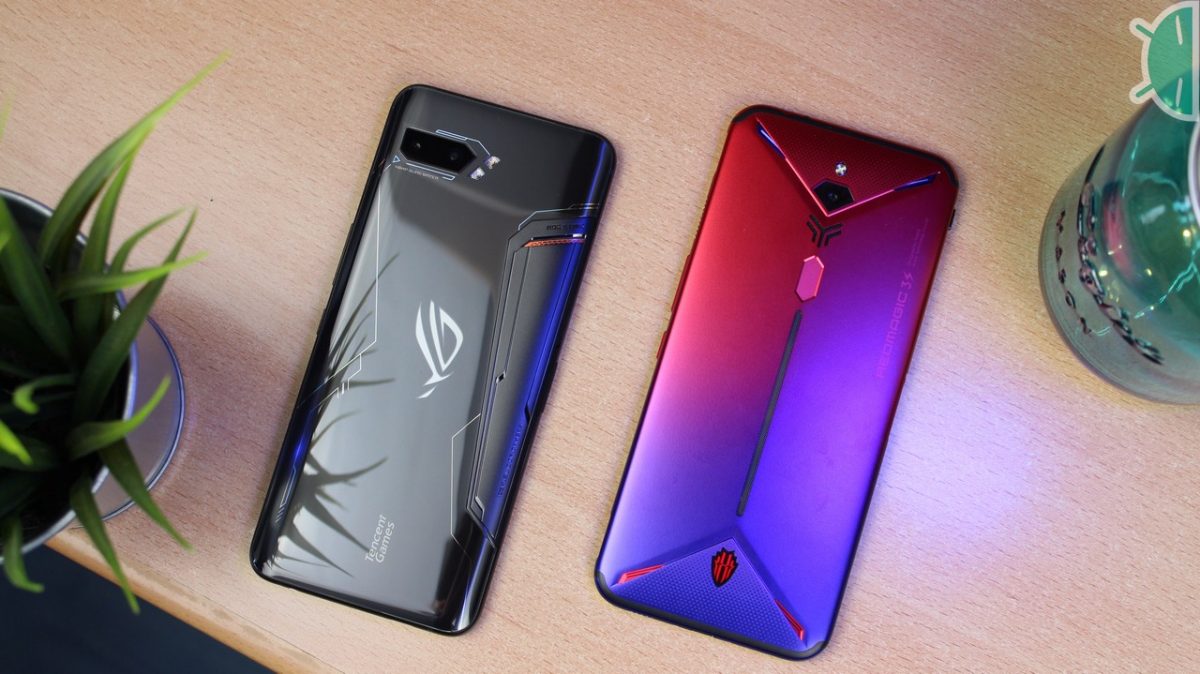 Nothing to say in everyday use because the performances are practically identical and we do not find anomalies or differences. In fact, we are faced with smartphones with brute power and with a lean and responsive software that improves the user experience.

As for gaming, each of them has a specific mode and I recommend reading the individual text reviews of Nubia e ASUS to discover every detail. What we are interested in knowing in this comparison is that they are rich in customizations in the same way, exponentially improving the gaming experience. Obviously any title is reproduced with details at mostin  HDR where present, and maintain a high frame rate and constant.

La camera is the sub-fund in which i gaming phone solitamente they sin compared to everything else, this is probably because it is not considered very important for the target audience or to try to keep costs lower. In fact, even in this case the photographs reflect more the quality of some medium range rather than the actual tops. On board we have the following sensors:

In conditions of good brightness the photos between the two are similar in terms of quality also because we talk about the same sensor, even though thanks to the Nubia software the photographs seem slightly more detailed than theASUS. However, the latter has a better management of automatic HDR and lights, as well as having less dull colors and an always useful wide-angle camera.

In night both work hard and quality inevitably falls, but it is still the ROG Phone 2 that has the best thanks to more defined shots, less wavy and better management of light sources.

From the front, instead, the gap is greater and the ROG Phone confirms what has been said previously and moreover has a definition far superior to its direct rival. Also, by shooting against the light you will have an effective HDR that will not improve poco

Il Nubia Red Magic 3S can record videos up to8K a 15 fps, which are not absolutely sufficient for such a resolution, for this reason comparing the two in Full HD a 30 fps we noticed insufficient performance based on their reference band. The focus is very fast, but the colors are a bit too contrasty and the stabilization is under the sufficiency.

On the audio front we find for both a dual front stereo speaker with DTS: X Ultra, but theASUS ROG Phone 2 returns an audio much more powerful and with more balanced frequencies. From this point of view it is difficult to find rivals who manage to keep up with him also because he also prevails over the sound on headphones and the one captured by the 4 microphones around the side profiles, unlike the two present on Nubia.

Speaking of connectivity it is impossible not to mention the 4 antennas present onROG Phone and then the Wi-Fi a / b / g / n / ac / ad e 4 × 4 MiMo, Bluetooth 5.0, FM radio, GPS / A-GPS / GLONASS / BDS / Galileo / QZSS and finally theNFC, or a feature not present on the Nubia. In general, performance here is good for both.

Regarding the methods of unlocking, the fingeprint sensor below the display dell 'ASUS and the one on the back cover of the Red Magic 3S they are the same, as both are precise, but somewhat slow in unlocking. Instead, it 2D facial release it is faster on the latter.

Within the review of the Nubia we have pointed out that the software that moves it is still a bit immature and presents several bugs or aspects to improve, such as incomplete translations or the impossibility to switch to Dark Mode. This aspect makes us prefer the ROG UI di ASUS, as it is more complete in terms of customization and free from imperfections.

Both have a rather basic interface and similar to the stock and for this reason smartphones are very fast and easy to use. Furthermore, it is important to note that they have a special gaming mode that will allow us to optimize all background processes, upgrade the CPU and perform many other functions that we have already analyzed in the individual reviews. Precisely from this point of view the two are playing at par.

So, in summary, on the one hand we have the Redmagic 2.0 based on Android 9 Pie, while on the other the ROG UI always based on the version 9 di Android.

In this sector we find some more differences since theASUS ROG Phone 2 has a battery from 6000 mAh, while the Nubia Red Magic 3S has one from 5000 mAh. Obviously this gap of 1000 mAh already makes us understand a lot, as it is equal intense use (Always-on / Display Ambient active, poco less than 1 hour of gaming, display at 90 / 120Hz, maximum performance in the game phase) I managed to almost total 7 hours di active display with the first, while about 4 hours with the second. In both cases I managed to arrive without problems at night, but with the ROG Phone 2 you can also close in peace two days in a row.

Both support fast charging Quick Charge 4.0 +, but in packaging they only have a power supply a 18W which employs about 2 hours and minutes 15 to carry the battery from 6000 mAh from 0 to 100% and about 1 40 hours and minutes to recharge the Nubia.

Before coming to conclusions it is necessary to talk about the prices. Indeed, these devices come officially sold to the following figures:

However, the latter is sold in international version also on GearBest and thanks to ours coupon that we share daily on Telegram you can buy the variant with memory cuts from 8 / 128 GB a 486 €. And it is precisely here that the challenge becomes more interesting, because at the same price I do not think there is even need to say it: the ROG Phone 2 and the best gaming smartphone that you could buy.

If we go to calculate i official prices then the difference about 300 € begins to be heavy and as far as theASUS is of another level, the Nubia is perhaps the one with the better value for money between two.

In conclusion, if you were looking for a smartphone voted for Gaming I advise you not to miss the Taiwanese company's product for yourself 489 € because it will leave you speechless. 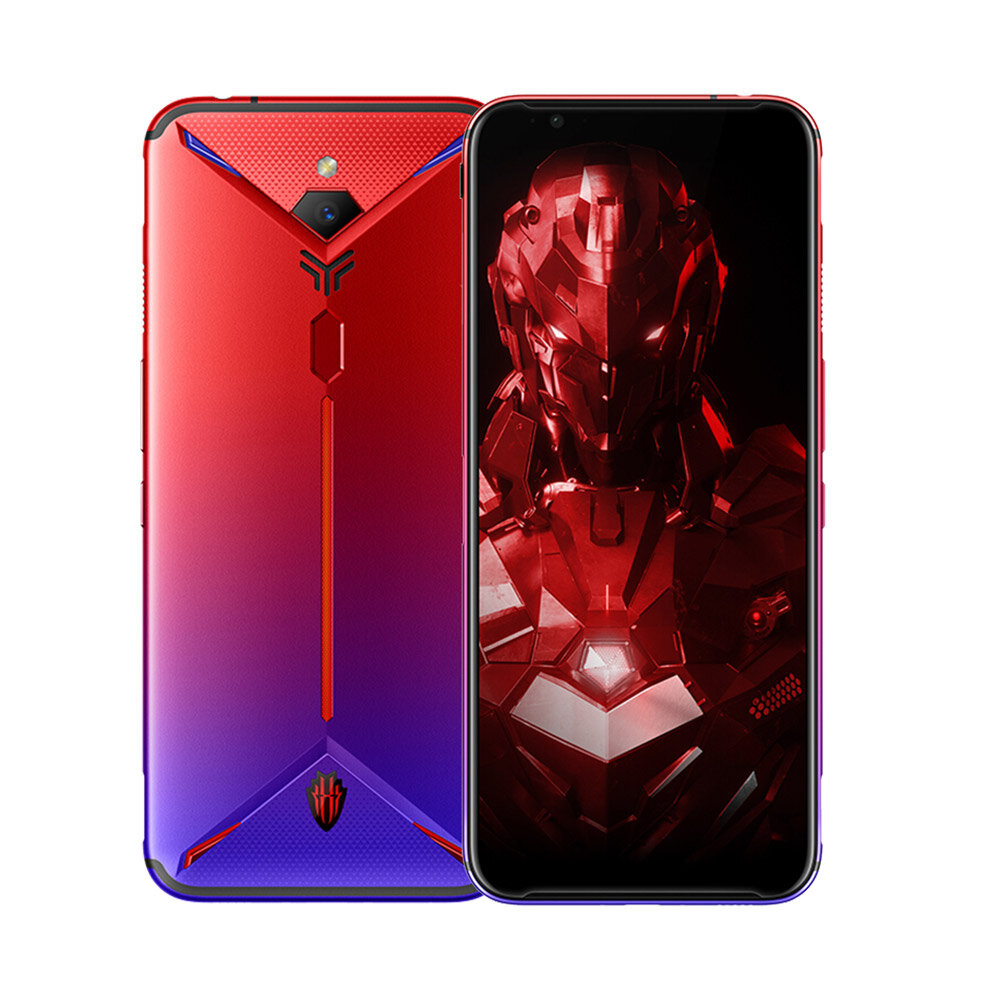 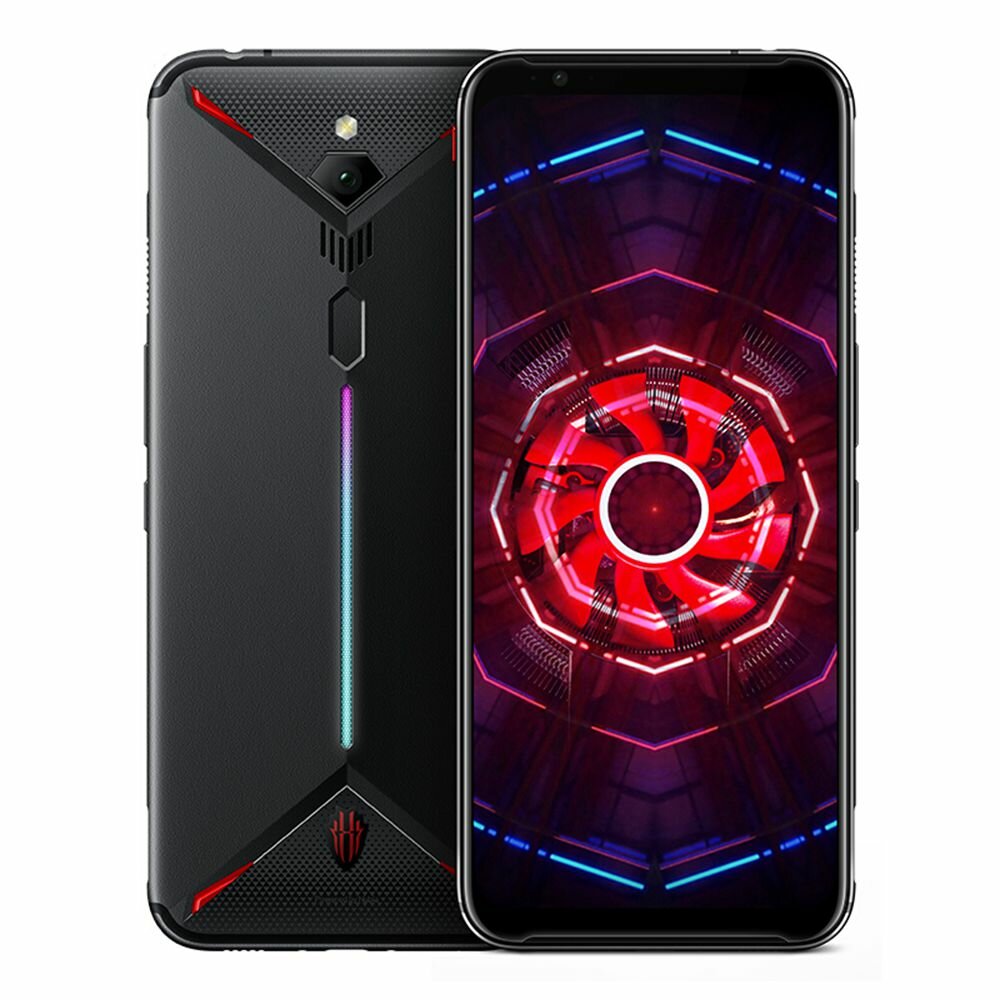