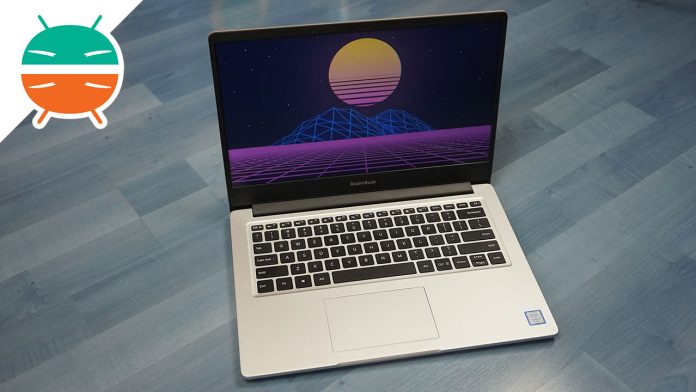 From the moment of his birth, Redmi has enjoyed great success among users thanks to products with an excellent quality-price ratio. Among these we certainly remember the Redmi Note 7 and Redmi AirDots, which seem to enhance the philosophy of Xiaomi (which is why we chose to create this sub-brand). The company, however, wanted to continue to dare and for this reason also launched on the market first notebook, Or the Xiaomi RedmiBook 14, which wants to detach itself from the range of I have a notebook thanks to an attractive price associated with good technical specifications.

In short, we have tested this device for more than 3 weeks and now we are finally ready to tell you about our experience. Find out more in the full review!

The sales package is made of simple cardboard and inside we can find the following equipment:

Despite that Xiaomi RedmiBook 14 be the first terminal of the new sub-brand, the design resembles that already seen with the We Notebook Air. Actually it must be said that the similarity is due to the fact that both want to be inspired by MacBook a few years ago. Nevertheless I must say that aesthetics is very pleasant thanks to a aluminum body with no particular frills, medium-sized frames and a beautiful black keyboard that contrasts with the gray color of the notebook. 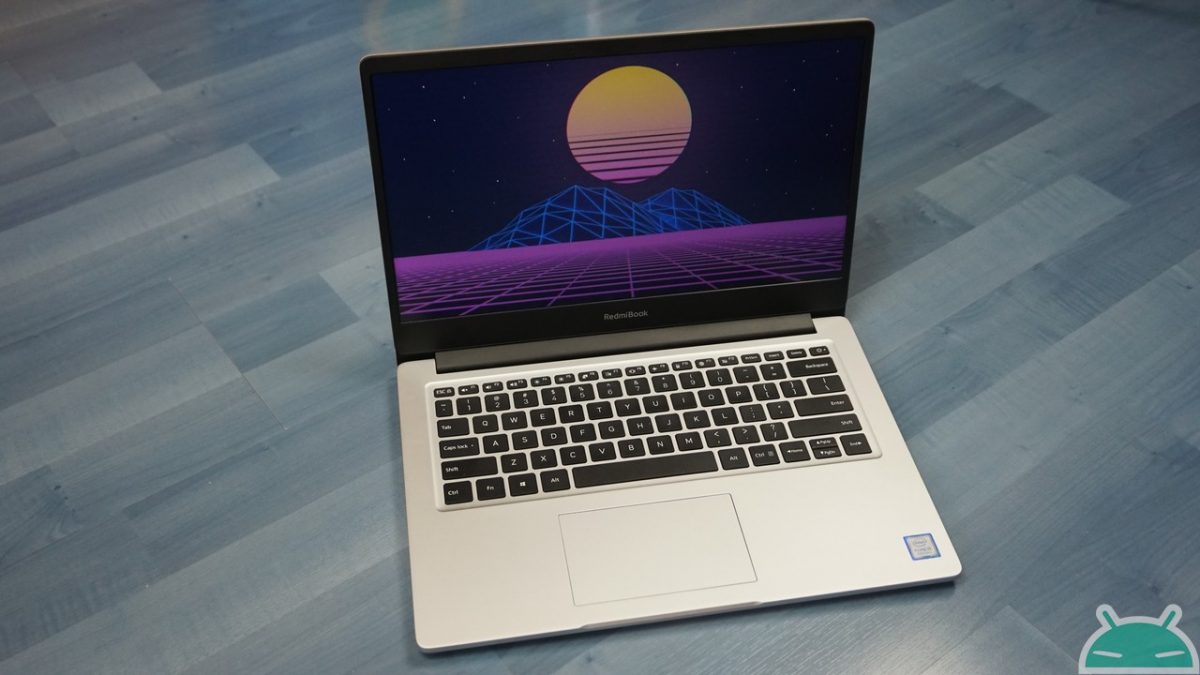 Lo Xiaomi RedmiBook 14 is entirely built in aluminum frosted, which gives a pleasant sensation to the touch and is also quite enough resistant as I have not found excessive flexures, neither on the display side, nor on the palm rest or in the middle of the keyboard.

I think that minimal is the right term to define this product because on the body there is only the Redmi logo, while at the bottom there are two excellent rubber risers that allow the fan to cool the CPU in the most agitated phases. Unfortunately, however, this adjective does not only refer to its aesthetic aspect, but also to the connectivity, because on board we find 2 3.0 USB ports, 1 2.0 USB port, HDMI, mini-jack input and for charging. Unfortunately we have some great e annoying failings: the absence of a door Type-C and a fingerprint sensor and the lack of a SD input o microSD, not to mention that the company has chosen to cut costs even more and don't add the webcam.

Personally I find this choice not very sensible because, despite not using a notebook camera every day, I find it fundamental in a device that costs more than 400 / 500 euro. In fact, during these weeks of testing I needed to make a couple of video calls, but I was forced to do them with my smartphone. 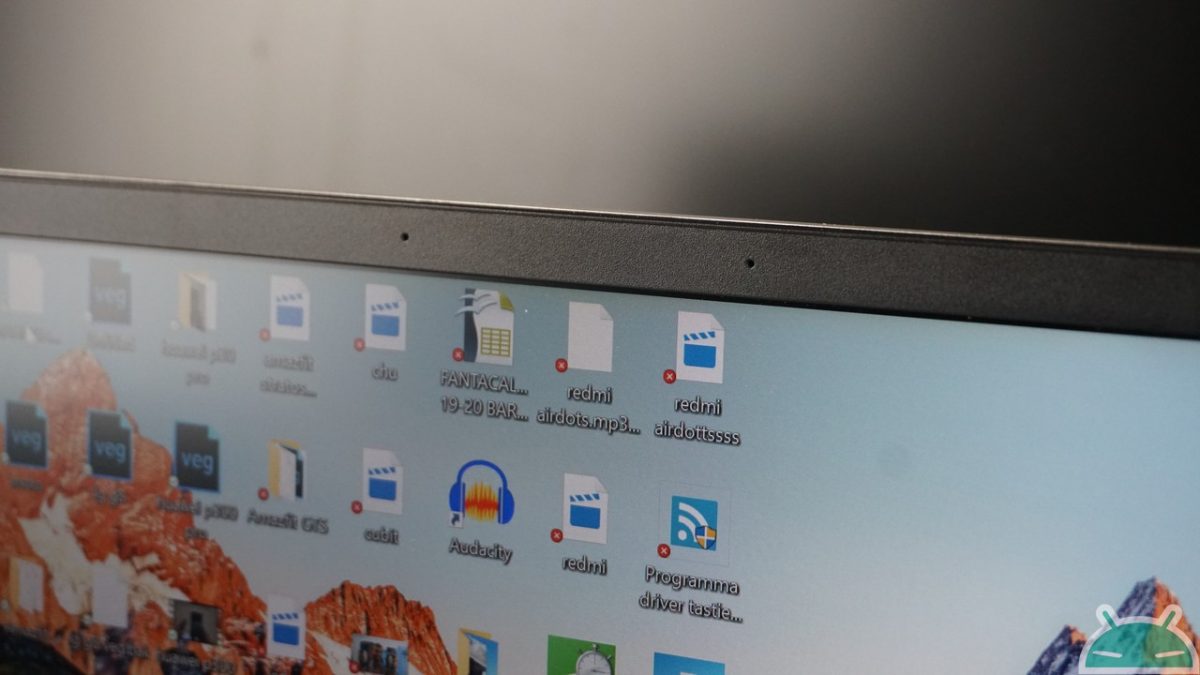 Despite all that Xiaomi RedmiBook 14 it's a great device for the mobility sectors, as we have the size of 323 x 228 x 17.95 millimeters for a weight of approx 1.5 kilograms. So we will be able to carry it inside the backpack without the weight weighing on our back and, very often, without the need to bring the power supply with us since the autonomy is really level, but of this it we'll talk later.

With regard to the keyboard this is full-size, with US layout and unfortunately not backlit. Apart from this aspect I must say that I found myself very well in writing articles and texts and I did not experience any kind of slowdown. Obviously if you have never used one US keyboard you'll have to get used to it and go a little by heart with the placement of the letters and Italian characters, otherwise you can attack some stickers and solve the problem quickly.

I Wrist Rest they are very large and comfortable, while the touchpad turns out to be very reactive and precise even during the use of gestures although it is decentralized with respect to the body. Personally I have not had any kind of problem with this aspect, but it is good to do it. 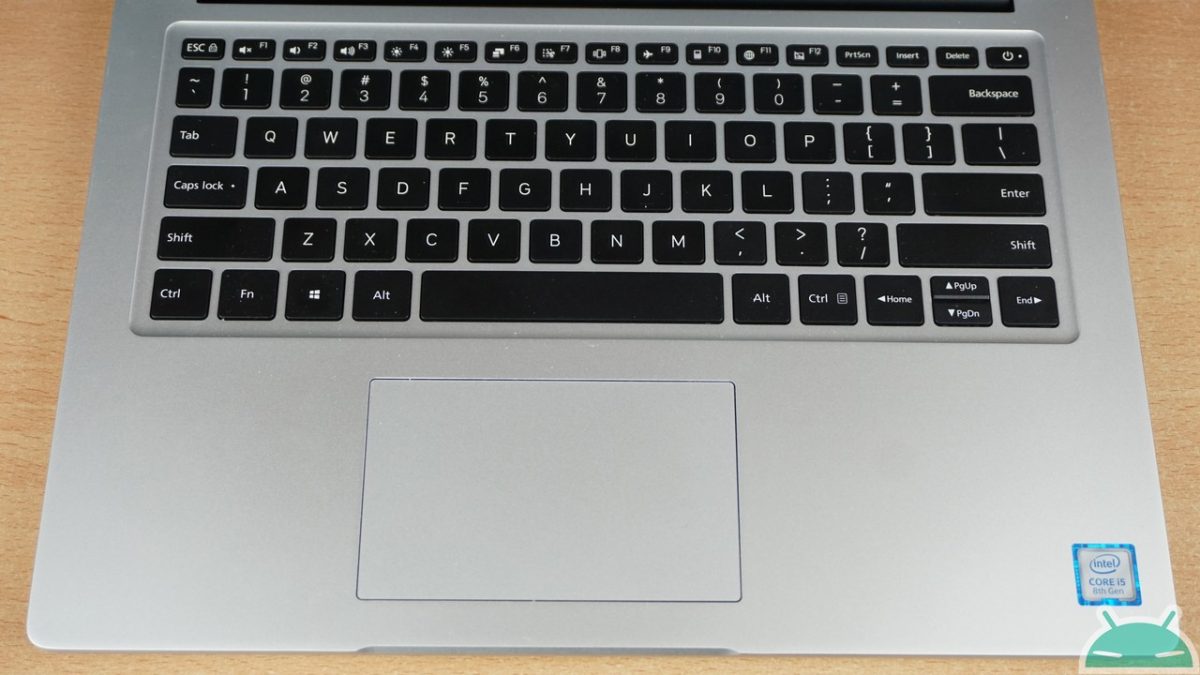 - speaker finally they are located on the base of support of the notebook and we point out that, although the webcam is absent, on the upper part of the display are still present the microphones. Obviously these were inserted to be able to exploit Cortana di Windows. 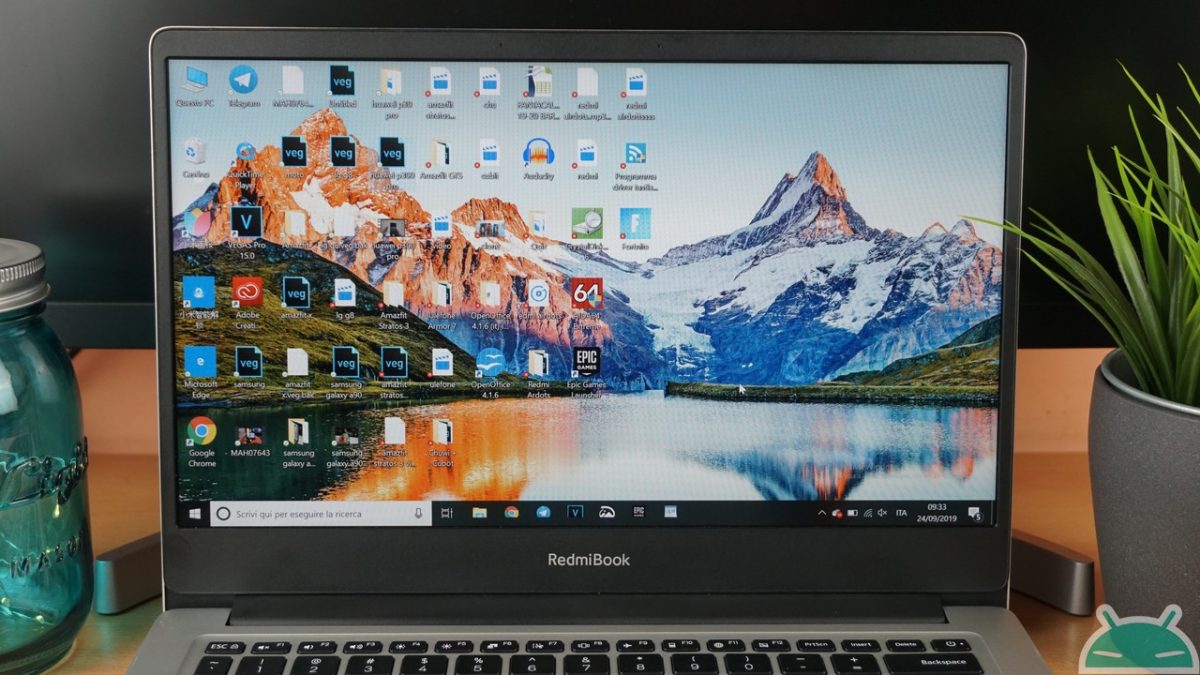 The panel in question gave me conflicting opinions, as the maximum brightness it is very good if you work indoors, but only sufficient if we use the notebook in direct sunlight and part of the merit is also of the matt finish which limits the reflections of the rays. THE colors returned are a little washed out, which could be a problem if you use it for photo or video editing.

For the rest the unit from 14 inches behaves well thanks to delle side frames contained (we are talking about 5.74 millimeters) and to gods good viewing angles. Furthermore, I do not deny to you that the first time I turned it on it gave me a very good impression, which changed slightly over time, analyzing it better. This is perhaps due to the fact that I initially used it indoors and it is also for this reason that I like to say that it could be a good office notebook.

Lo Xiaomi RedmiBook 14 in our possession has a chipset Intel Core i5-8265U based on architecture Whiskey Lake with base clock frequency of 1.6 GHZ and maximum of 3.9 GHz, which is flanked by a But by the full GPU acceleration tech dedicated NVIDIA GeForce MX250 from 2 GB GDDR5, 8 GB of RAM DDR4-2400 e 256 GB of Kingston's SATA SSD (KINGSTON MS80000058688), without free slot for additional expansion. This is currently a plus that is granted on the other models produced by Xiaomi.

Generally speaking, notebook behaves very well in everyday life if exploited with the classic office use, so this includes the use of Office, web browsing, some photo and video editing programs and so on. However, I would have expected something more as for the latter as we have a dedicated GPU available. In fact, we have no problems editing video in Full HD with multiple audio and video levels, but i render times are not then so brevi as one would expect from such hardware. 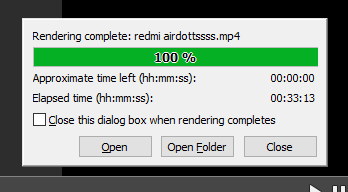 To give you a concrete example, to render a video in Full HD a 50 fps with a video level and two audio levels about 4 minutes it takes on average around 30 minutes. Of the timing that made me turn up my nose a little and, in the same way, I occasionally rediscovered some slowdowns in photo editing with GIMP. In short, having had both Xiaomi Mi Notebook Air 13.3 that it Xiaomi Mi Notebook Pro I can tell you that with them I found better performance in this field.

Le memory inserted inside the terminal are on line with its price range, they are not very fast, but still get enough. Furthermore, I leave you all the tests afterwards benchmarking carried out with the Xiaomi RedmiBook 14.

With regard to temperature I remained particularly soddisfatto as the CPU will hardly go over 62 ° and this is also thanks to the two elevations in rubber placed on the bottom of the laptop which will allow the fan and all 'heat pipe to easily dissipate heat. The other side of the coin, however, is that the first will tend to do a little noise in the most agitated phases.

No problem with playing videos in 4K, while moving on to Gaming we can reproduce without any problem all the titles that we find on the Microsoft store. For example Modern Combact Versus runs a details at most without any fps drop, while we have some more difficulties with titles like Fortnite, which is reproduced by the machine in detail alti a 60 fps, but the playability does not happen in a fluid and clean way, for this we will have to climb the quality a half a 30 fps.

Finally, on board we find Windows 10 Home in Chinese, but you can bring it in Italian without having to change license, but doing one clean reinstallation. Then you will have to go and install some drivers for the correct functioning of all the components.

We have already talked about connectivity in part previously. It's a real one sin be it absent the sensor fingerprint, the SD / microSD slot and the door USB Type-C, but probably Xiaomi he wanted to differentiate this product from the other range, giving users a cheaper alternative. Nevertheless, on board we find the most recent Bluetooth 5.0 (which is not present on the others). Finally, it is also good to specify that we have connectivity Wi-Fi Dual Band up to 433 Mbps, which does its job well and has not shown any particular problems.

Speaking of audio, instead, it Xiaomi RedmiBook 14 It owns two speakers from 1.5W one, which guarantee a sufficiently powerful audio if you see movies indoors or if you listen to music. From this point of view I must point out that they come more privileged the alti and average to the detriment of the low, but in general the sector obtains the sufficiency.

Too bad once again for the absence of the webcam, which would have given some more points in the final evaluation.

L'autonomy is the truth flagship the Xiaomi RedmiBook 14, as under the body we find one battery da 46 Wh, which allowed me to use the notebook for a full day no need to top up.

Let's go into more detail, as we need to specify what kind of use it is made of. More precisely, I started using the notebook at 9 as a classic working day and I managed to arrive without any kind of problem 18. In these hours I have alternated WordPress a Sony Vegas, Spotify, GIMP (equivalent of Photoshop) e web browsing. If your purpose is alone the latter it will not be difficult to touch the 10-11 hours.

If instead the notebook is used in a manner less constant e desultory then you can get up to 2 days of autonomy.

In short, it is Xiaomi RedmiBook 14 it's a true one tank in this sense and you can take it with you touniversity or office without the thought of having to carry the power supply. Speaking of this aspect, the recharge it happens in around 2 hours.

Once this premise is made we must say that the general line for the hardware that is offered on price it is not so high, but at the same time the renunciations that we must do begin to be a little too much and practically a figure identical we can manage to take the last one Xiaomi Mi Notebook Air 13.3 more balanced in every respect.

Nevertheless, after the 3 weeks trial I would say that this could be a good office computer, as it can perform all the required functions well, it is reliable and responsive and if video editing is not your main goal then it might be perfect for you. Obviously it is also suitable for theuniversity use, but to take notes and use the office suite you can also buy a notebook from 200 € without going to spend it 540. 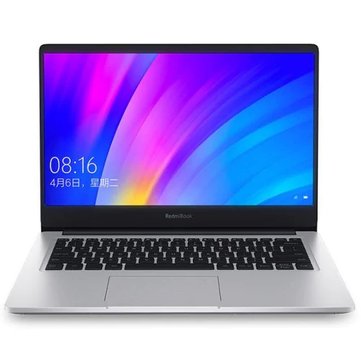 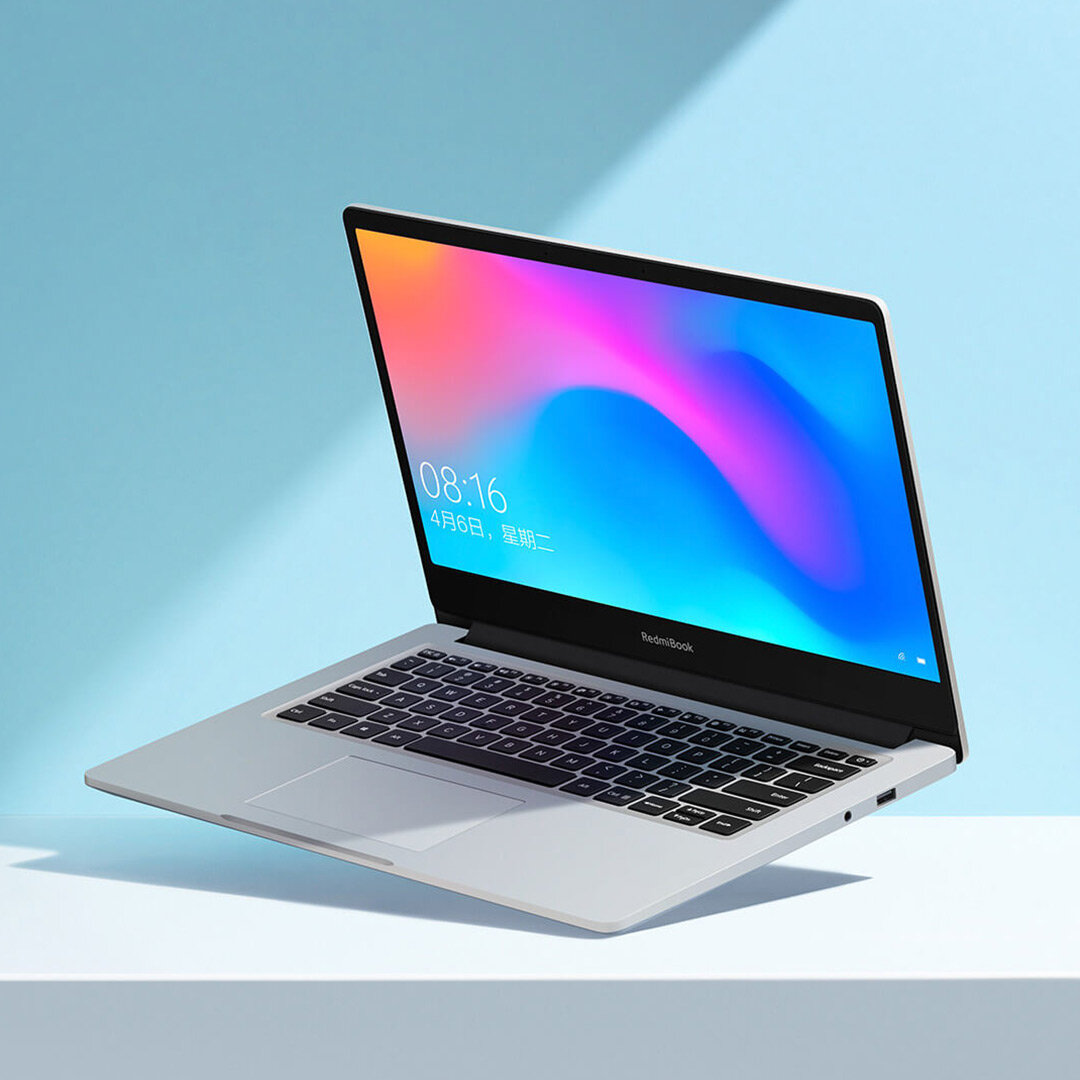 What is Redmi K40 the first with the Snapdragon 870?

Keekoon KK004 review: nobody knows it, but it "defends itself" well