Over the last few months Realme she claimed to be ugly, reaching goals to no end and arousing no small concern for super-noble brands like Xiaomi and the OPPO itself. The latest model of the company Realm 5 – it was a success and wait for the rebrand of the series for the Chinese market. With over 10 million units sent in a year, record in iosa and even the debut in Europe (and in Italy), the Asian company has managed to carve out a place in the smartphone industry. A good place and above all ... in record time!

Realme breaks and enters the TOP 10 of the best OEMs 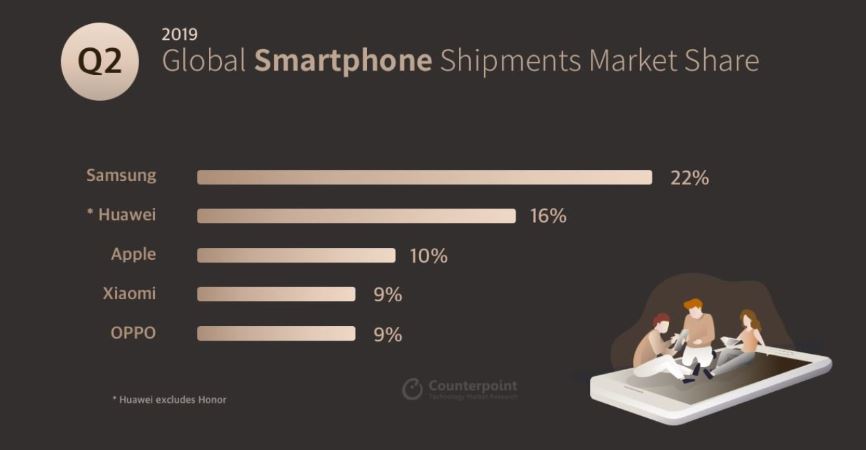 A report published by Counterpoint takes stock of the situation regarding the best smartphone manufacturers in the world, with reference to the Q2 2019. As can be seen from the "ranking" above, at the top we find the usual Samsung, Followed by Huawei (in the coming months we will see what impact they will have current problems with the USA), Apple, Xiaomi ed OPPO.

In short, nothing new under the sun if it were not for a small note present in the report (you can find it at source). According to what reported by Counterpoint, well-known analytical company, Realme would have finally appeared in the TOP 10 of the ranking of best producers in the world. A stratospheric result for a company born about a year ago and so ... very young!

And to think that this is the second quarter of the 2019. How will the brand have gone over the past few months? And how will it close the year? In September it should debut on Realm XT – here you find the first unboxing - the rival of the Notes redmi 8 Pro and this will be the test case: will the company be able to stand up to its rival? What do you think of this company able to assert itself in such a short time? Let us know in the comments!