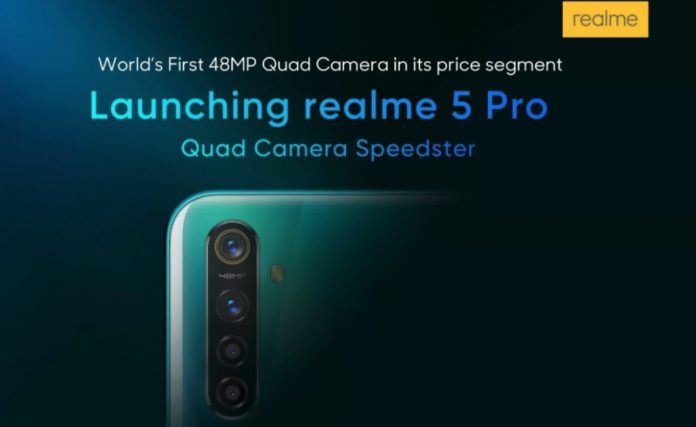 Il Realm 5 it will be moved by a processor Qualcomm Snapdragon 665, already seen in action on Xiaomi Mi A3 recently leaked on GeekBench, accompanied by 4 / 5 GB of internal memory. The battery will be a well unit 5000 mAh with support for the proprietary fast charge VOOC. There will be support for as many as four rear-facing cameras of which the main with f / 1.8 opening.

Il Realme 5 Pro, instead, it should be moved instead by a Qualcomm Snapdragon 712 accompanied by 6 / 8 GB of RAM and with the same battery from 5000 mAh this time with quick charge VOOC 3.0. On the latter variant, moreover, there should be a frontal pop-up camera and the now confirmed photo setup from well 4 sensors of which the main from 64 mega-pixel.

The design of the devices features very standard lines with the writing Realme mail sideways in style Honor and recently Xiaomi is an arrangement of the vertical posterior photographic module.

Expand your perspective and see it all with the Ultra Wide Angle lens #realme5series.
Get ready to #JoinTheReal5quad and watch the launch live at 12: 30 PM, 20th August. #LeapToQuadCamera
Know more: https://t.co/IczXkhy4lB pic.twitter.com/VhsbMTnxIy

The official launch of the new ones Realm 5 e Realme 5 Pro is set for the 20 August so stay tuned with us to discover the new possible best-buy in the medium-high range.