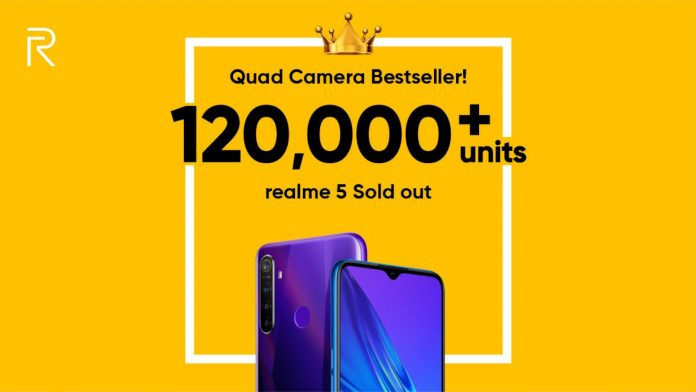 We were able to talk to you extensively about the new series of Realme. This smartphone has been rumored for some time now, so much so when Realm 5 was announced many of the features were already known. During the presentation event, then, in addition to announcing the price, the company has declared a date for the official release of the device. It seems, however, that only the fastest were able to grab it.

120,000 units and counting! Thank you for such an amazing response for #realme5. Stay tuned for the next sale at 8 PM today. pic.twitter.com/chzOmVcmQa

It is never appropriate to reach conclusions when you do not have a product, but it seems that Realm 5 has been appreciated by the public. According to sales data, in fact, this device was literally snapped up after a few minutes, forcing the company to announce a new smartphone release date.

Through Flipkart and the official website of Realme india, the Chinese company opened sales of the device for the first time. It seems, however, that in only 30 minutes have been sold over 120.000 unit of Realme 5, thus registering a sold out. It was the same managing director of the company to release this data, publishing this information on Twitter. In the same post, however, Madhav Sheth assured its users, stating that the August 30th, starting from 12, device sales will be reopened.

Would you have expected such a success? Do you believe that Realme 5 can sell a lot? Comment below and let us know your opinion.