We have been talking about for a while now MIUI 11, what will be the new face of Xiaomi smartphones. One of the most appreciated Android proprietary interfaces is about to receive a full update. The update to the new UI will introduce various aesthetic changes, as well as the addition of new features and modes. Here below you will find all the news, supported smartphones and release date.

Upgrade 24 / 09: today the official announcement of the MIUI 11 has finally arrived, you can read it in the dedicated article.

The first thing you notice in a ROM is obviously the launcher, an aspect that has always been rather controversial when it comes to MIUI. Especially for the absence of drawer, a lack that fortunately is being remedied. As well as the presence of the Touch 3D, although it is a software-only feature and not linked to a hardware peculiarity (as was the case on Xiaomi Mi 5S).

Returning to talk about the drawer, it will be possible to choose between both options, thus being able to maintain the current menu-free setting for the installed apps. If instead you opt for the drawer here is that the app menu will appear on your smartphone. At the top there will be a row with recent apps, or those used last. Also, as shown in the stylized menu on the first screen, a search box may be found at the bottom to quickly find the affected app.

There will also be improvements for what concerns the screen of thesmart assistant, accessible with a swipe to the right. Not only graphic, but also functional, with the addition of weather and date in the upper section.

With the MIUI 11 they should change also some of the app icons, as shown in the screenshot below. However, these are still temporary icons, so it is not possible to know which ones will actually be adopted. 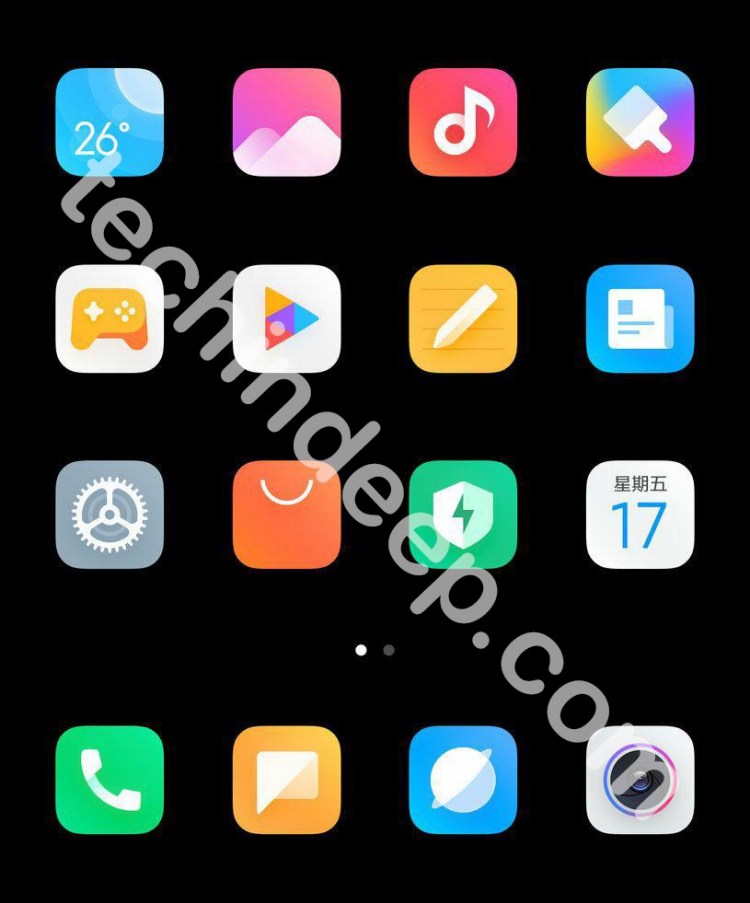 There is also talk of a refresh of the animations, in order to make the whole thing more uniform in the graphic style.

This is how the complete Settings menu will appear, although it appears in Chinese.

Lowering the curtains quick toggles you can see the return of the weather shortcuts, initially introduced with the MIUI 9. Here also the toggle was inserted to activate the new Ultra Energy Saving mode.

The window for requesting permits was also slightly modified when installing a new app. 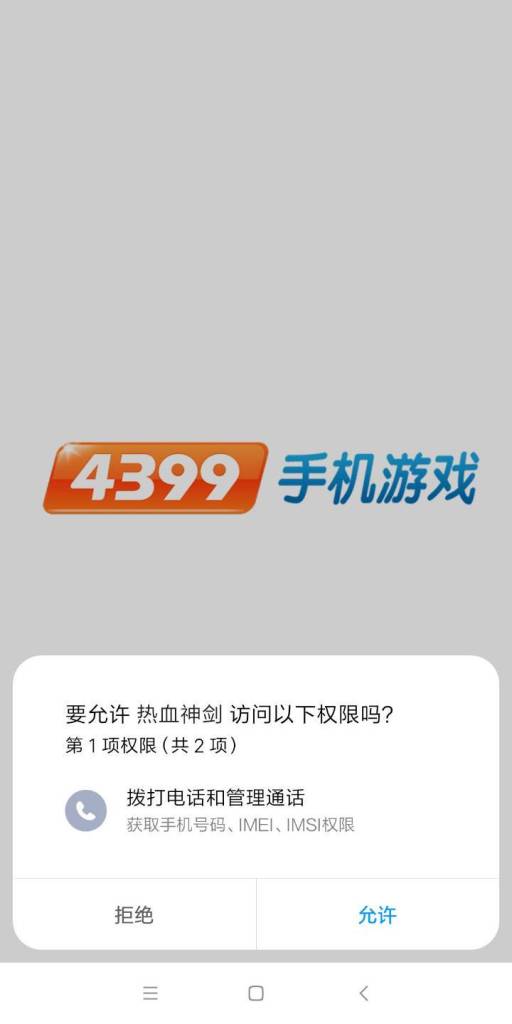 As well as Google Duplex, the MIUI Dialer app (we don't know if from 11 or not) yes enriches with integration with AI Assistant. This will allow the user, if unable to respond, to have the Xiaomi smart assistant handle the call. It can speak with the other person, answering with pre-set sentences.

The Messages app has also been changed.

Introduced with one MIUI China Beta on Mi 9,  3D gestures could be introduced definitively with the MIUI 11. Thanks to the synergy between gyroscope and accelerometer it is possible to exploit these shortcuts to start "quickly" apps and various functions.

For example, by shaking the phone in the W-shaped air you can launch the TikTok app, as shown in the GIF below.

As we are moving more and more towards the concept of total full screen, there are some smartphones with notch and there will be still for a while. That's why Xiaomi has well thought of giving the user the possibility to hide the notch. And with the MIUI 11 it will be possible to do this in more than one way, for example by excluding the status bar with the black mark and lowering it to the line below.

As suggested by the rumors, the MIUI 11 will give the possibility to have the quick answers within the lock screen.

One of the best features realized on MIUI is that related to the Always-On Display. If you have a smartphone with an AMOLED screen and MIUI 11 will be added new customizations. For example, it will be possible to change the font color and clock widget, as well as the presence of new graphic styles.

Although it has already been introduced with the current MIUI 10, with the arrival of the MIUI 11 the Dark Theme will also be carried on other smartphones. One of these will be the Pocophone F1, to the delight of its owners. 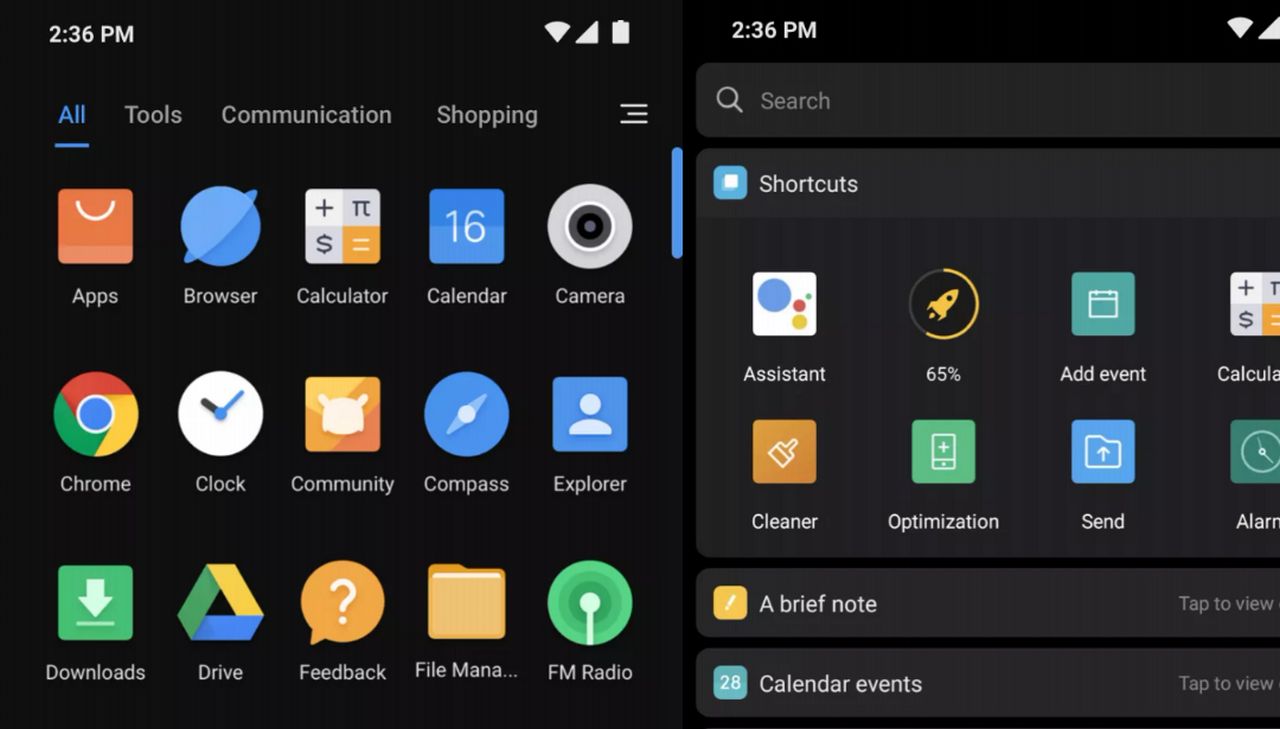 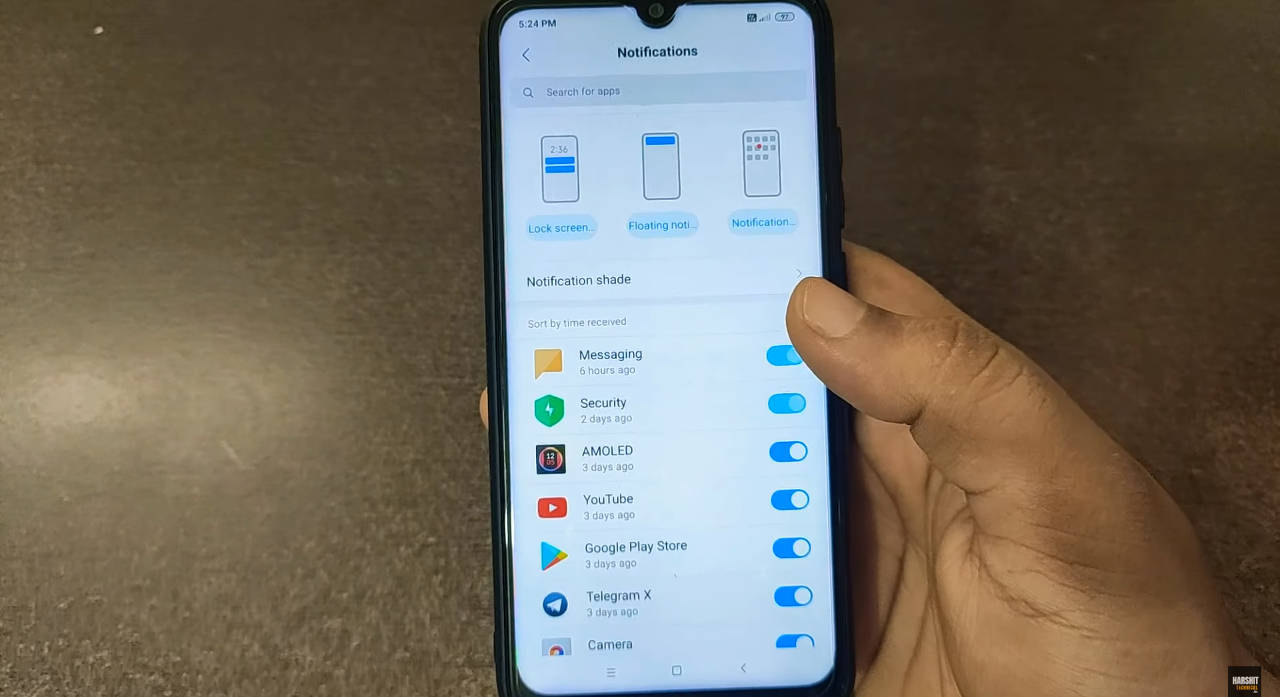 In this regard, the animation of the aforementioned floating notifications will also be optimized, as shown in the video below.

Although there is no official confirmation, with the MIUI 11 the possibility of automatically delete screenshots once shared. A boon for all those who are used to making social screenshots, websites and anything else to show them to their contacts. New editing options should also be added.

With Xiaomi Mi CC9 a nice feature has been added for editing photos called Sky Filter, or the sky modification. As you can see in the screenshots below, you can change the background of a photo by choosing from the various presets available.

The mode should also be entered Panoramic Selfie, giving the possibility to realize even wider self-portraits horizontally.

Another addition in the Camera app is the ability to take pictures with the movement of "squeezing" from hand to hand in front of the display. A function that should be useful especially for self-portraits.

The mode is also entered in the MIUI 11 Screen Cast, with which to "project" the contents of the smartphone, including documents, games, photos and videos, onto an external display. This can be done both on and off, as shown in the special menus.

Another novelty seen with Xiaomi Mi CC9 was the improvement of existing ones MiMoji. Compared to the previous version, for example, you can create your own avatar to use in the photos. The editing options have been expanded by inserting new faces, haircuts and attached accessories. Once created, the avatar can be inserted into famous paintings, for the lulz.

In addition to some minor changes to the graphical interface, the Battery menu of the MIUI 11 will be enriched with a significant novelty. This is the new mode called Ultra Power Saver, with which to greatly extend the autonomy. Taking advantage of the AMOLED technology of the models with relative panel, activating it will display an almost totally monochrome black screen.

It will only be possible to use a small circle of apps, "castrating" the smartphone to obtain a prolonged battery life. This will be shown below the clock widget.

If you are interested in knowing what the use of the battery by app and hardware is, it will now be possible to view its consumption both in percentage and in milliamps.

The fast charge icon in the status bar will also be modified. 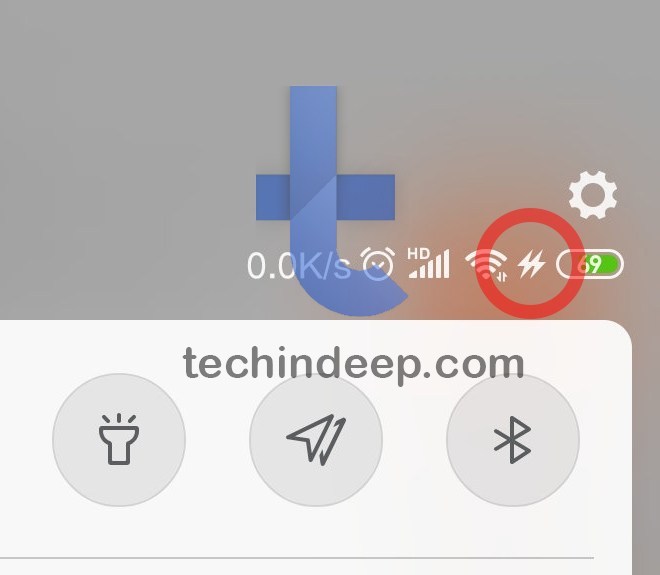 A modern one will also be given to the File Manager app of the MIUI 11, which will be equipped with a look more minimal and "flat". At the top there will be the search bar to find the files more quickly, while at the bottom a bar will inform us of the remaining space in the phone's internal memory.

If you hoped that Xiaomi also included a pedometer in MIUI, you are about to be satisfied. With the MIUI 11 smartphones will use the integrated sensors to detect the steps taken by the user, providing the related statistics.

In addition to the obvious addition of new wallpapers, the app in charge of managing them will be slightly revised in the MIUI 11. In the meantime you can download a small selection.

Regarding the Themes app, the area related to your profile has been redesigned. The possibility of has also been added follow your favorite Themes authors, so as to receive a notification as soon as he publishes a new one.

Also a new version of the My Browser is planned within the MIUI 11. As the last Beta in the V11.0.0 version shows us, a more minimalist look in white and blue colors will be adopted for the home. The navigation keys will be located in the lower part, so as to facilitate one-handed use.

Small changes and optimizations also for the Calendar app.

The MIUI will also bring an update of the graphical interface of the Security and Wi-Fi Display functions, shown in the screenshot below.

In view of the launch, Xiaomi has officially announced that it will insert a warning in the case of earthquakes. In the event of an alarm, a pop-up notification will appear on the screen to inform the user of the situation. 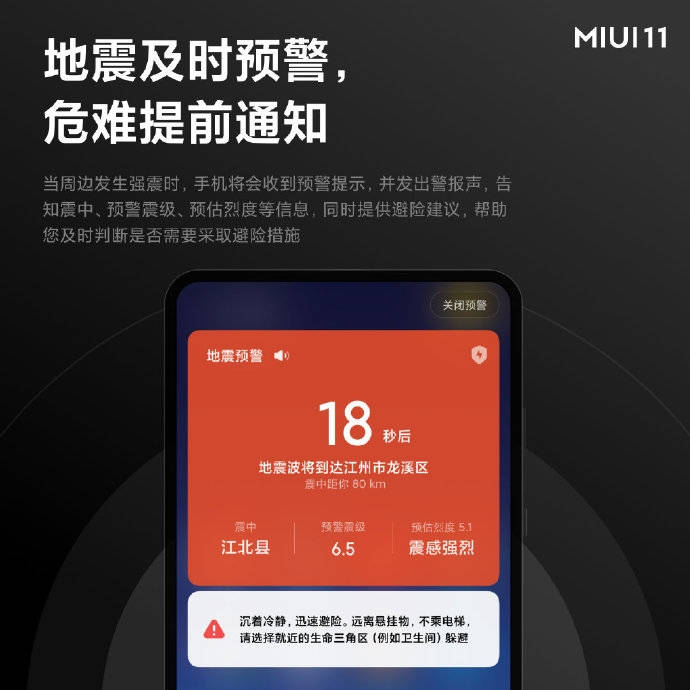 Inside the MIUI 11 a space dedicated to children will be added, allowing parents to avoid putting their children in front of inappropriate content.

At the same time as the Children's Space, the MIUI team announced the arrival of its own Zen Mode, with which to take your head off the smartphone.

Finally, new animation effects have been added when syncing the Xiaomi cloud service. 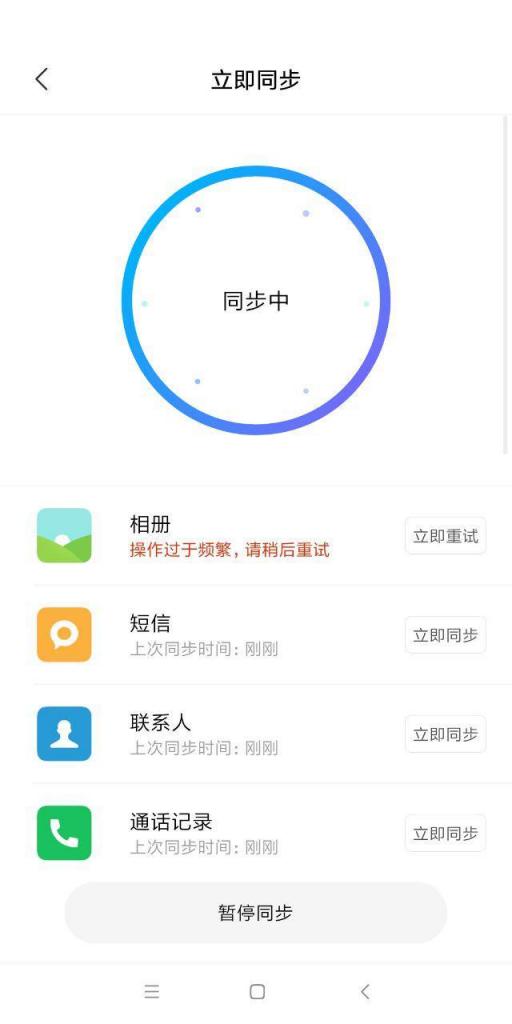 With the MIUI 11 the interface of Mi Wallet, the app dedicated to the Chinese public for the management of mobile payments, was also refreshed.

Always a rather annoying element in the MIUI (especially in the China version), the team announced which will introduce one switch to disable advertising.

When will the update to MIUI 11 be available?

Initially it was thought that the MIUI 11 could debut with Xiaomi Mi CC9, but in reality this did not happen. The new graphic design of Android by Xiaomi has accompanied the launch of  Mi 9 Pro 5G e I MIX Alpha and will be available over the coming months, starting from first half of October, the roll out will be available for smartphones Xiaomi e Redmi.

Which Xiaomi and Redmi smartphones will be updated to the MIUI 11?

Just as announced at the presentation stage, the models will be different Redmi and Xiaomi to gradually receive the update a MIUI 11. The roll out is already complete, that's when your device will receive the update.

Official: SMIC banned by the US, Trump's latest move