Waiting for Honor 20 e Honor 20 Pro which will be presented to London il 21 May, the Chinese company decides to open the dances in Italy with the mid-range of the same series, or Honor 20 Lite. How will he behave during the test days? We just have to find out in our review!

The sales package is the most classic and in full style Honor. Inside we find the following equipment:

Please note that in our package (dedicated to the media) there was no TPU cover, but this should be present in the official sales box.

Honor 20 Lite takes over the design of his predecessor but adds a camerain fact, the aesthetics of the front and rear parts do not change particularly, making the smartphone barely distinguishable and not very original in a market segment where the devices all resemble each other. 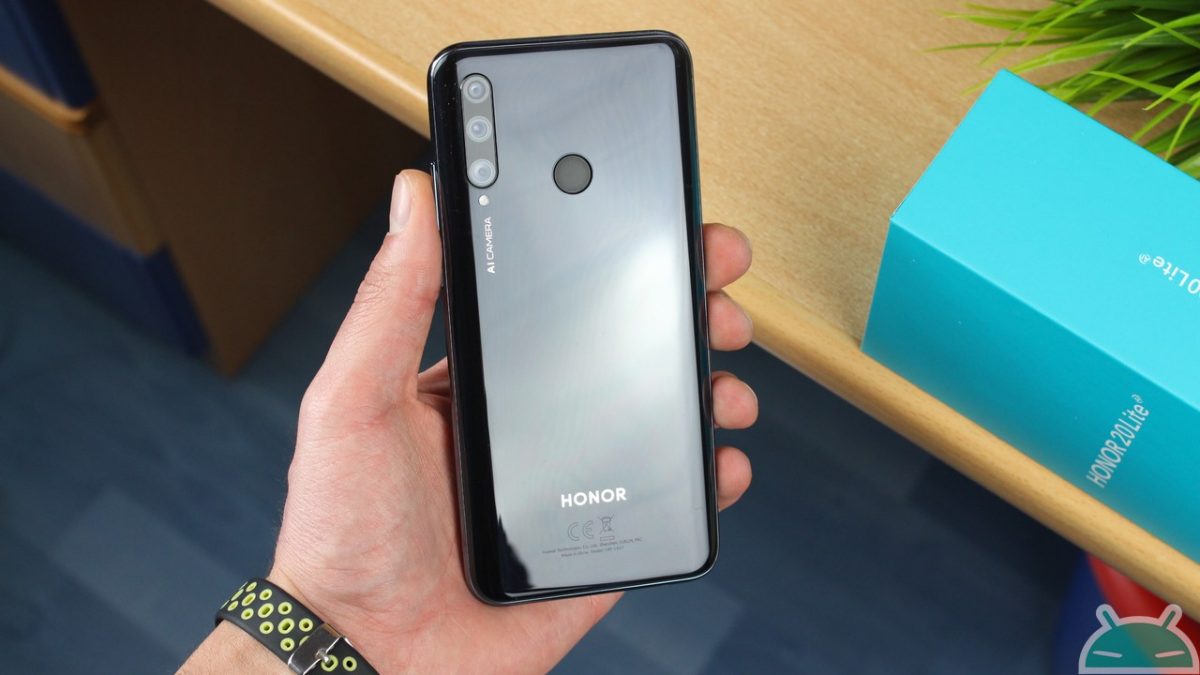 We are not talking about a compact smartphone but, despite everything, theergonomics it always remains rather good thanks to the rounded edges, the limited thickness and the well-balanced weight. In fact, the dimensions are of 154.8 x 73.64 x 7.95 millimeters for a weight of 164 grams. 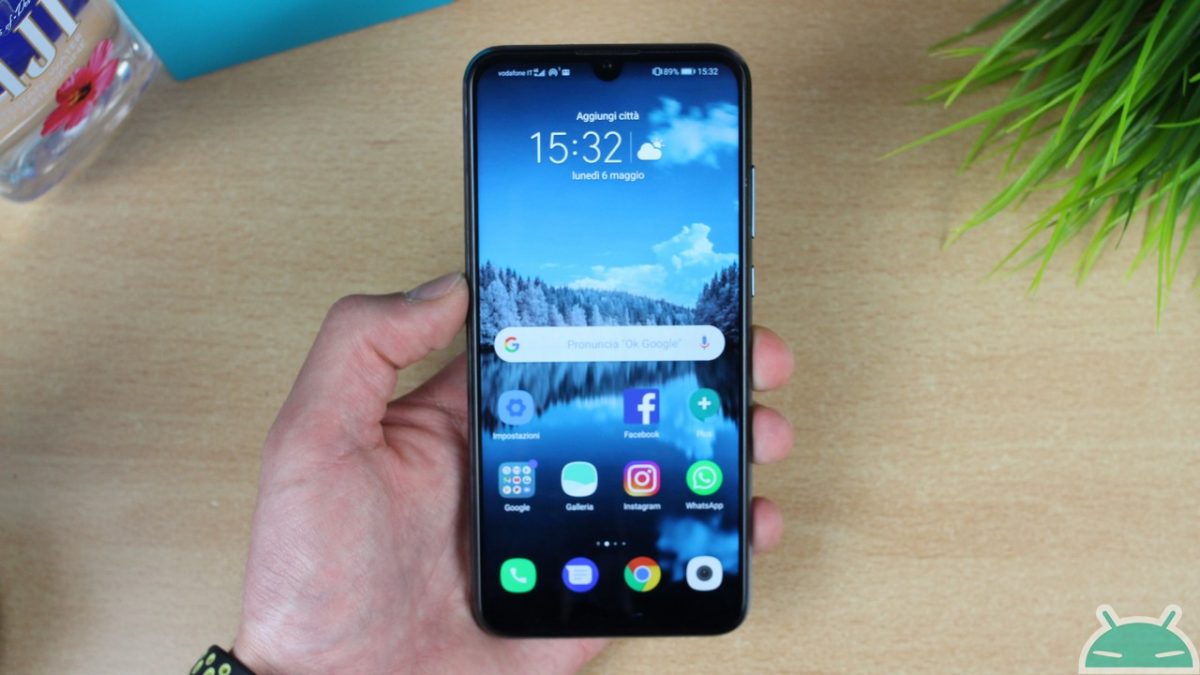 La back cover It is made of plastic and we must point out that it tends to get dirty often, but can be easily cleaned with a cloth or a t-shirt, while the side frame is made of aluminum. A positive aspect of the bodywork is that the triple camera is almost flush with it and therefore guarantees a fair balance when the smartphone is placed on the table. 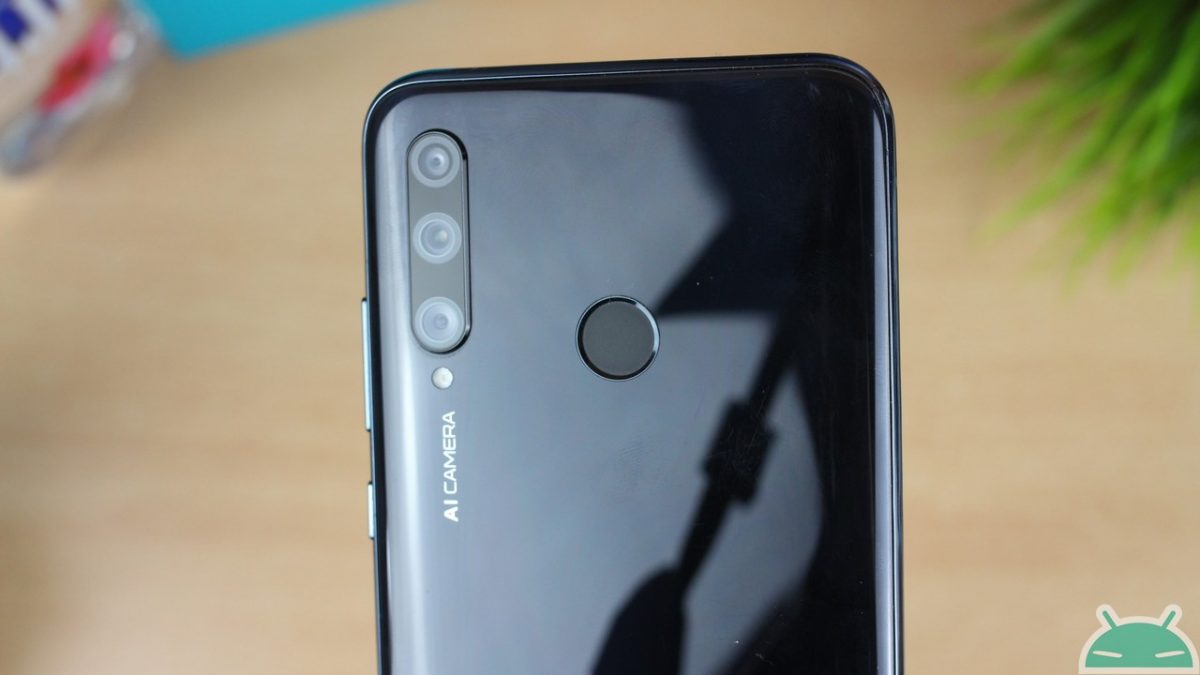 Remaining on that profile, in addition to the photographic module, we also find the single LED flash and the fingerprint sensor, while on the front you can see the ear capsule, the camera in the drop notch and the brightness and proximity sensors. 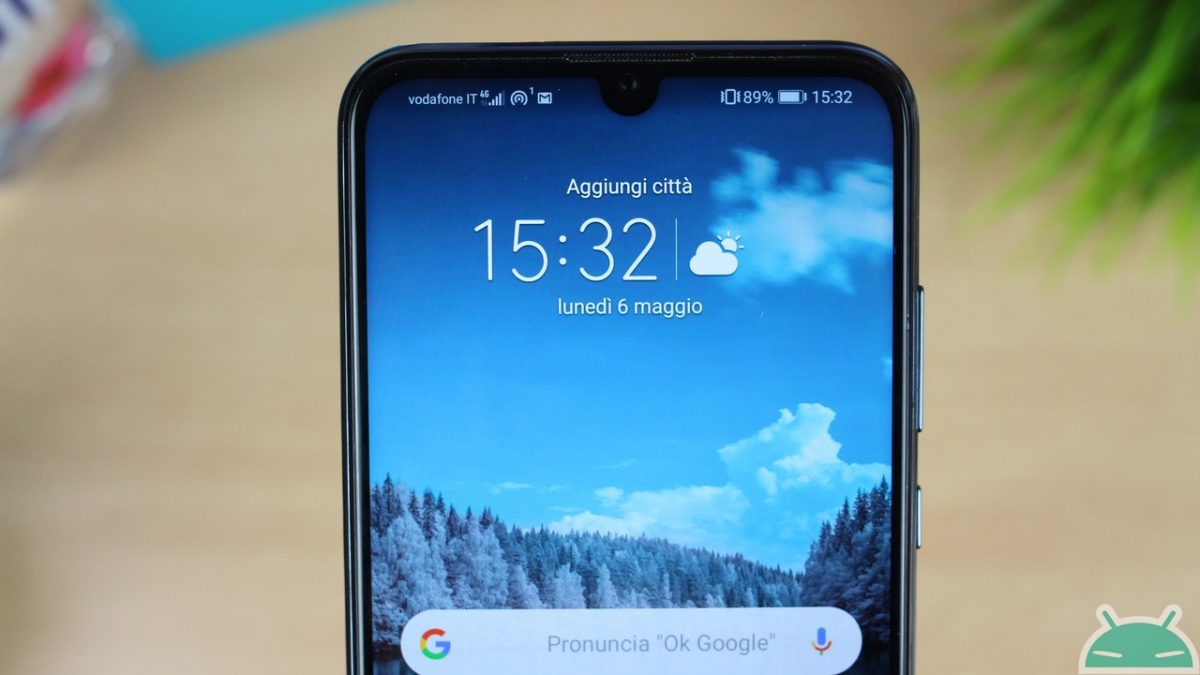 On the right side of theHonor 20 Lite we find the volume rocker and the power button, unlike the left one which is completely empty. Unfortunately, below is still present the Micro USB input, flanked by the system speaker, the main microphone and the mini-jack input. Above this, on the other hand, you can see the microphone useful for reducing ambient noise and the dual nano SIM / SIM + microSD slot. 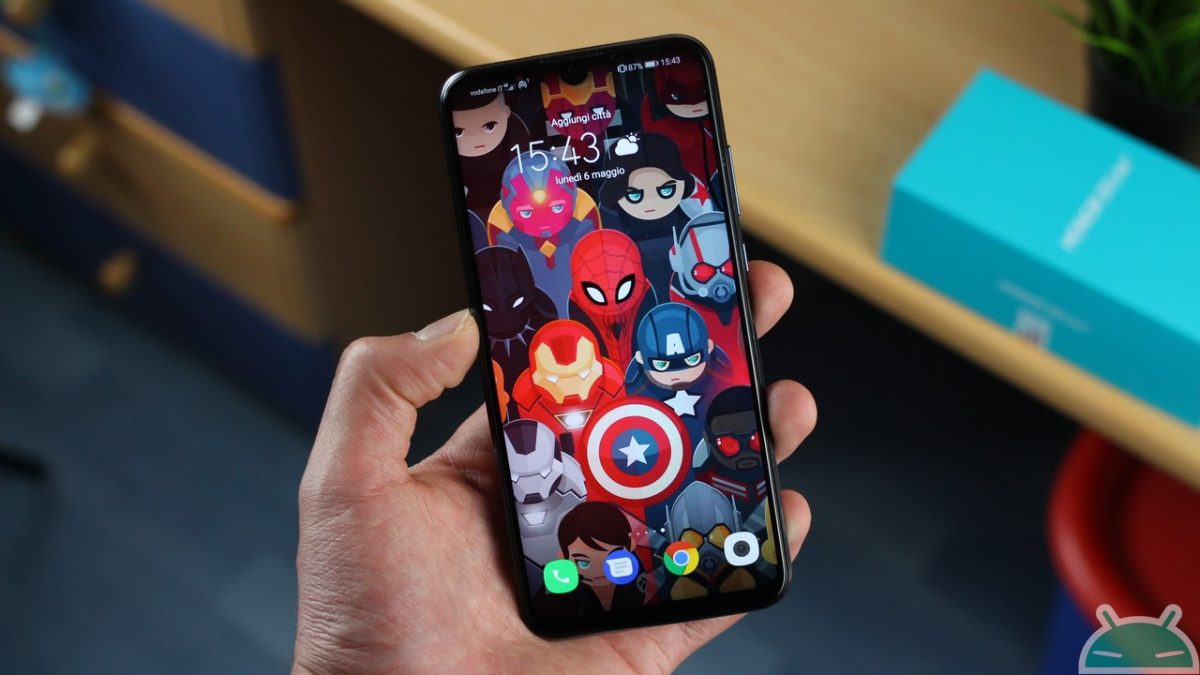 The panel is in line with its price range, i colors I'm enjoyable although not very vivid, the automatic brightness sensor adequately carries out its work and the maximum brightness is good as are the viewing angles. If you are not satisfied with the color rendering you can always change it within the settings.

For the rest we have the possibility to adjust the screen resolution to optimize energy consumption, the Eye Protection mode to filter the blue light and the possibility of hiding the notch.

To move theHonor 20 Lite theKirin HiSilicon 710, which is inclusive of an octa-core processor with a maximum clock frequency of 2.2 GHz, 4 GB di RAM e 128 GB of internal memory expandable via microSD and a GPU Mali-G51 with GPU Turbo support.

As for the performance nothing to say, we have already had the chance to try this chipset and we already know how much it is reliable. The speed in the opening of the app is good for its price range, but a couple of times it happened to me a couple of freezes sporadic. However, we point out that it could be a defect of our unit, also because otherwise the smartphone is fluid and not very energy-intensive.

No problem even with gaming, in fact, the GPU does a good job both with lighter titles like Clash Royale o Brawl Stars than with heavier ones like PUBG. The latter is reproduced by default with medium details and the game is played smoothly and without lag.

In conditions of good brightness the photos are beyond the sufficiency thanks to a good level of detail and a natural level bokeh. On some occasions with active artificial intelligence the colors seem to be slightly too saturated and contrasted, but nothing compromising. Finally, good light management and white balance.

Returning toAI, during the day it goes to make some barely noticeable improvements, but at night they totally change the final result thanks to the contribution provided by Night mode, which increases the sharpness of the photo together with the brightness. In fact, taking without this mode, we will have shots that seem to be almost "Fogged". In short, the sensor suffers during the night and will not work miracles, but behaves well during the day.

Frontally, however, theHonor 20 Lite presents a camera from 32 mega-pixels with opening f / 2.0.

Also in this case of day we have some great shots, which are characterized by a very high definition, satisfactory colors and adequate lighting management. In this field it could very well be one of the best. In the evening, of course, the sensor suffers and we should keep our hands still to keep the photos from moving. In almost total absence of light Honor 20 Lite tries to do what it can without getting great results, while increasing the ambient light we have enough shots for sharing in the Stories.

Honor 20 Lite can register video up to the maximum resolution of Full HD a 60 fps and the general quality reflects what was said above.

L'audio output from the lower speaker of theHonor 20 Lite it is quite high and has a fairly good balance of frequencies, although higher and medium ones are mainly favored. For the rest the audio in ear capsule is good and we have not found problems with the microphone, which captures our voice without any background noise. So you won't encounter any problems with your caller during calls.

The compartment connectivity is perhaps what sin more, in fact, during my test week theHonor 20 Lite He has not never hooked il 4G +, so this makes me think that it is not supported and in general I saw a slightly lower reception than its predecessors. Moreover, the Wi-Fi he is alone Single Band and not Dual Band, the device è 4.2 and the entrance is still present micro USB.

Nevertheless I didn't have any problems nor with the Wi-Fi nor with the device but we would have expected something more as the smartphone was launched in May of the 2019 and not last year.

Positive note is the GPS / A-GPS / GLONASS / Beidou which guarantees us good satellite navigation and the presence ofNFC to make payments.

We also remember that theHonor 20 Lite has a hybrid slot, so we could choose whether to insert two nano SIM or a nano SIM and a microSD.

Il fingerprint sensor place on the back cover is very precise but a little bit slow, let's say that 10 times on 10 successfully unlocks the smartphone. As if that were not enough, it is also present unlock with the face through the camera for selfies. During the day we do not encounter any problems and the smartphone will do its job very well, but in the evening or in the absence of light the system will go into a bit of a crisis by returning mixed results: with the low brightness of the display you will not be able to unlock it, while if set at maximum it will take a few fractions of a second more but in the end the operation will be successful (excuse the pun).

Honor 20 Lite is based on Android 9 Pie with personalized interface EMUI 9.0.1 with security patches updated to March 1.

We already know this software very well and we also know that it has a good number of customizations, such as those related to the display, the themes, the various options for energy saving, digital management (which shows us the timing of use of the smartphone and its applications ) and so much more.

Theoretically, some functionalities related to theartificial intelligence and camera like those for the calorie counting, instant translation and of product recognition with relative redirection on online store (functions we have seen on Honor Magic 2), but at the time I didn't find them. We will probably have to wait for an update.

For the rest I have not found problems in daily use if not two sporadic freezes in almost 2 weeks of tests. Again I wouldn't worry, as the next update will probably improve this Honor 20 Lite.

Under the body of theHonor 20 Lite we find a battery from 3400 mAh, which allows us to obtain one very good autonomy. In fact, on average I've always done a day and a half of use with a half about 5 half hour active screen. It is therefore not difficult to break even the 6 hours di SoT.

La recharge it is not very fast and takes about approx 2 hours to be completed.

Honor 20 Lite is a smartphone that gods very good ideas on several fronts, but the sector of connectivity tends to lower its final score along with the price. In fact, of list this device is available at 299 €, a bit' too many if you think that other competitors with a better technical sheet are available at a lower price.

Perhaps it would have been more appropriate to launch it at 249 € and, in that case, one could have turned a blind eye to the shortcomings of the smartphone, taking into account that over time the price would have fallen further.

Under the other points of view Honor 20 Lite is one right smartphone and that he does his job sufficiently, but if you are interested in his purchase we advise you to wait a few weeks.

No, OnePlus Z will not be moved by the MediaTek Dimensity 820