Over the years we have seen many Chinese brands continue to produce rugged smartphone, who have tried to give them an increasingly modern design despite the limits of the case. Doogee is one of the companies that has always believed in this niche and this is also demonstrated by the last one Doogee S90, or one of the first (if not the first) rugged modular phones of the sector. How will he have behaved during our test days? We just have to find out in the full review.

Ours is a sample dedicated to the media, but the sales package should not differ too much from the one in our possession. In fact, the smartphone resides inside a beautiful fabric-reinforced case, inside which we find the following equipment well ordered: 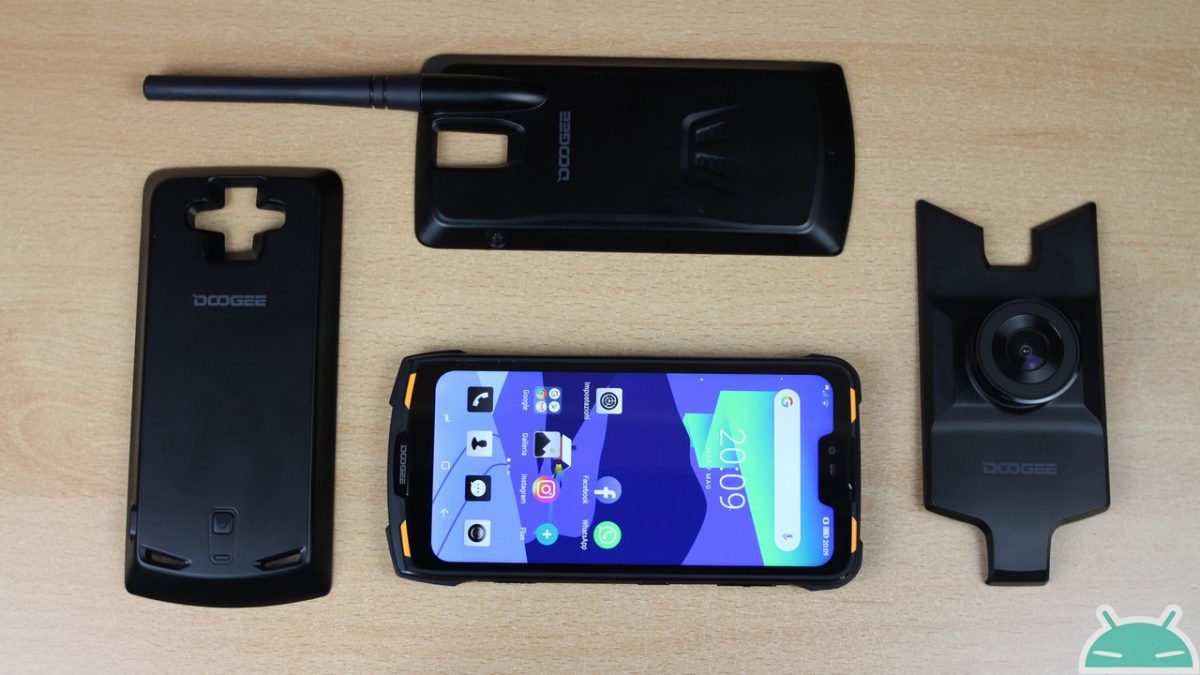 Please note, however, that there are also forms for the Gaming (with the gamepad) and the one for the 5G although we do not have precise information on the latter.

Il design all in all endearing to be a rugged phone thanks to an alternation of simple and honeycomb wefts, as well as orange plastic details. Obviously, however, the dimensions are more than generous and one-handed use is difficult, more in detail we talk about 168.5 x 80.7 x 14.1 millimeters for a weight of well 300 grams. The latter makes us understand how important its weight is, which prevents us from prolonged use with just one hand. 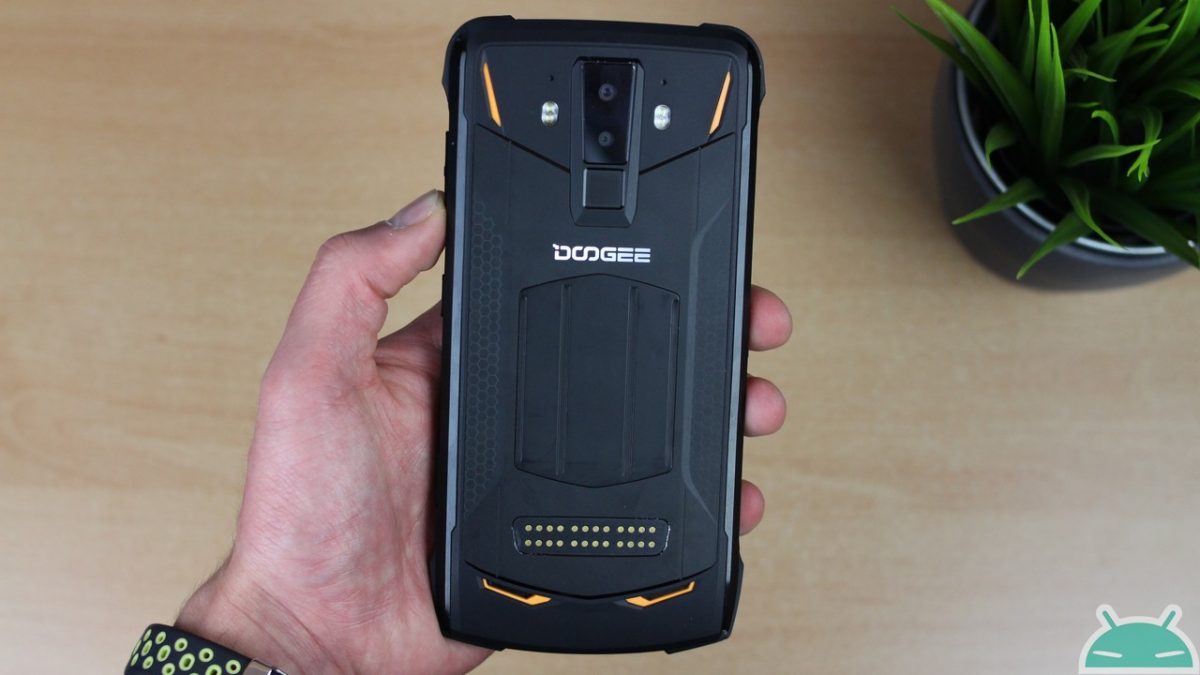 However, speaking of a rugged we cannot complain from this point of view, as it is a smartphone designed for a specific target and which, as always, is rather cumbersome due to the protezioni. In fact, all the corners of the Doogee S90 they are coated with rigid plastic e rubber, while part of the back cover and the side frame is in aluminum frosted. 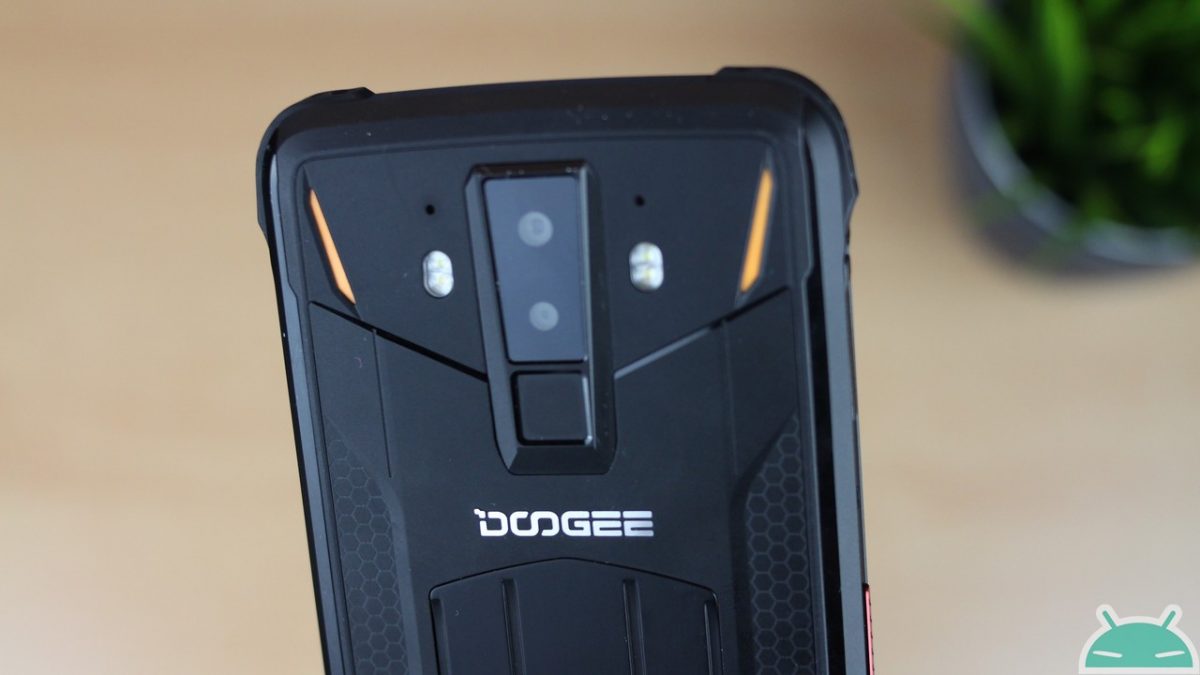 As far as this aspect is concerned, I do not know how good it was to insert parts into aluminum, since making it fall a couple of times I accidentally have it chipped in a corner. 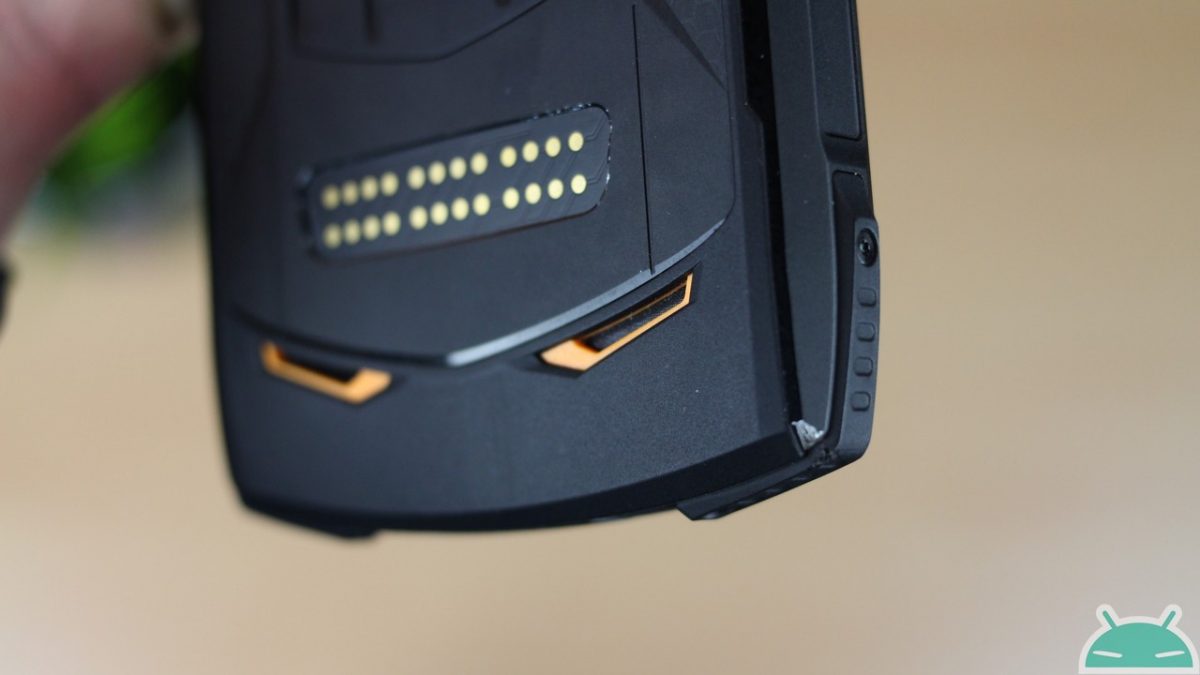 So, despite the protections, I found a certain amount externally fragility though the Doogee S90 is well assembled and certified IP68 against water and dust, IP69K against high pressures and high temperatures, as well as certification MIL-STD-810G.

At the rear we find the dual camera flanked by 4 LED flash, the fingerprint sensor and the magnetic pins for the modules, while frontally there is the ear capsule and the front camera inside a notch that, on this smartphone, makes no sense. There is no lack of various brightness and proximity sensors.

On the right side we can see the volume rocker with the power button and the shutter button to take pictures, unlike the left one which integrates the walkie-talkie button and the dual nano SIM / SIM + microSD slot well protected by a flap. Finally, on the lower profile you can only see the USB Type-C input which also replaces the mini-jack. 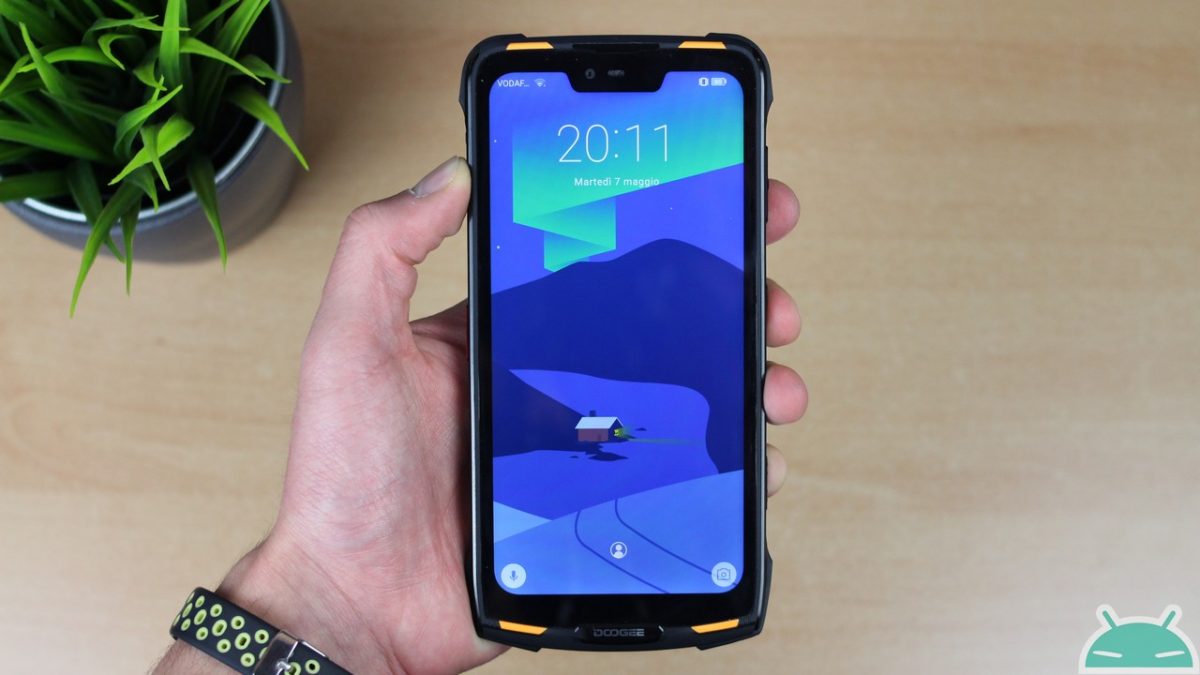 We are faced with an all-in-one panel balanced thanks to the colors that, although they tend to a bit cold temperatures, are discreet but not very contrasted. If you were not satisfied with the display calibration you can go to the settings and change it as you like thanks to the classic functionality Miravision present on almost all smartphones with processors MediaTek.

Finally, the viewing angles are good and the touchscreen that performs well despite the thickness of the glass. Small criticism for the notch which makes absolutely no sense in a smartphone like that since it doesn't have very fine frames and it also deprives us of the notification icons.

The hardware made available by the smartphone manages to make us perform the simplest and most simple daily operations without any problems and the opening of the app takes place in a rather short time. Unfortunately, sometimes the software makes everything seem more cumbersome but, despite everything, the Doogee S90 does its job without noteworthy imperfections.

As for the gaming the Doogee S90 it behaves quite well, managing to play all the heaviest games including midrange by default PUBG, which, apart from some sporadic fps drop, runs smoothly.

Doogee S90 it has a double rear-view camera license plate Samsung with sensors from 16 + 8 mega-pixel with opening f / 2.0 and well 4 LED flash.

In good light conditions photo taken are discrete. Let me explain better, the level of definition is sufficient as well as the colors, but often the latter are contrasted a little too much or marked too much by the HDR. Under backlight conditions this may appear normal, but it usually occurs even when a light source partially illuminates an object. Please note, for example, the photo of the tree trunk here in the gallery. In general, therefore, light management is not optimal.

In night the quality inevitably drops and the photos will tend to show digital noise and we should hold the hand steady so as not to make the photos move. In short, the sufficiency is not reached.

In this case, however, the Night Vision module which also integrates a wide angle di 131°. I must say that in daylight even in low light can make the shots much brighter, but in that case the noise will be evident. In the evening, on the other hand, this module does not work miracles and in the absence of light it cannot pull out its nails.

In this case I must immediately say that there was some problem with our unit, even though the Doogee S90 is placed on a table, the selfies will come slightly inclined, as if the sensor were awry. However, being a sample for printing it could be a defect linked only to our unit.

In conditions of good brightness the photos are barely sufficient due to a not always effective management of the lights even if the definition is good. In the evening, what was said above is repeated.

I video can be registered up to the maximum resolution of Full HD a 30 fps and they present a focus that is not exactly lightning and a general quality under sufficiency.

L'audio out of the two speakers placed on the back cover is powerful enough although more high and medium frequencies are favored at the expense of low frequencies. In the earpiece the telephone conversation takes place without any particular problems thanks also to a good audio captured by the microphone.

Overall, the connectivity department does not stand out for innovation in the modules used, as the Bluetooth 4.0 è antiquated, but on the other hand we have the wireless charging to 10W.

Staying in this compartment there is a module that has not yet been officially sold, or that is for connectivity 5G and the one that, instead, is in our possession, or the mod walkie-talkie. Thanks to the special software we can use this function to use the Doogee S90 as a radio and get in touch with other people. 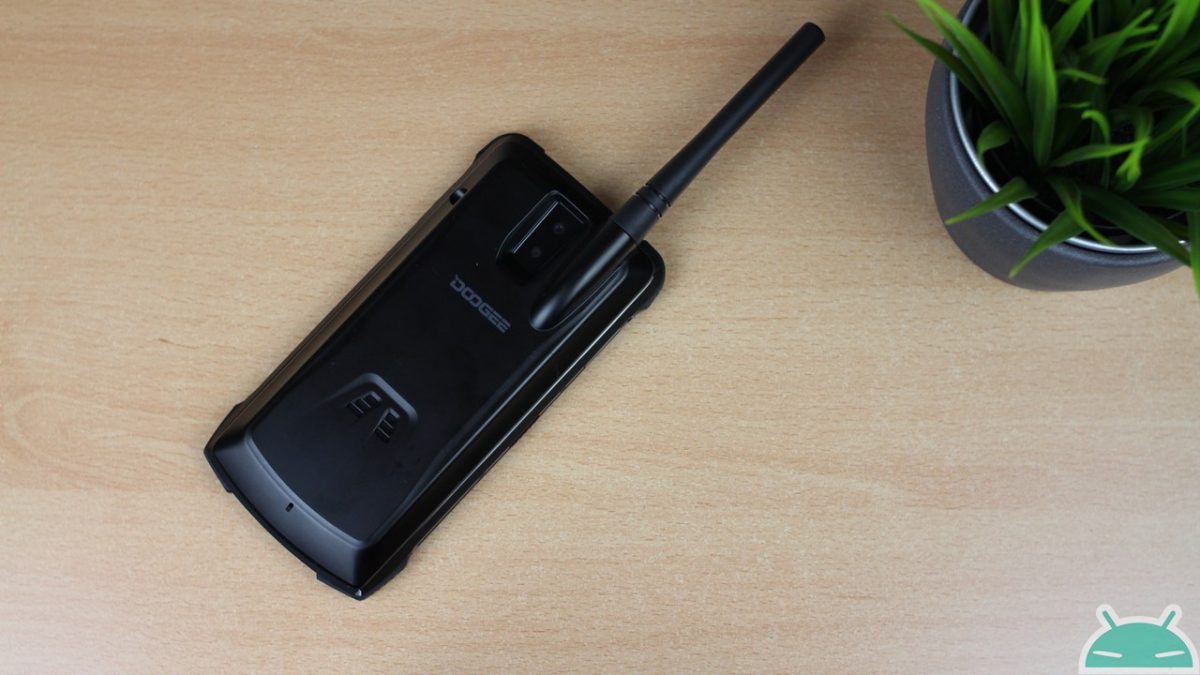 Finally, the fingerprint sensor it's not very precise nor too fast, let's say about that 7 times on 10 successfully unlocks the smartphone. Then it is not missing facial unblock through the front camera, which is quite precise during the day, but at night suffers from a lack of lighting. Please note that it is possible to activate a function that illuminates the face in order to unlock the Doogee S90 but it is not always effective.

Doogee S90 is based on Android 8.1 Oreo with customized interface from the manufacturer. Unfortunately the design of this UI it is not the best and in many respects it could be a little tacky. The fact is that in general I have not seen large lag or freeze, but the experience of use seems a little limiting and cumbersome.

Le customizations inside are several starting from the system applications for the integration of the modules, up to translator, Game Mode and "Tool Bag", which includes a series of theoretically professional tools such as the barometer, the plumb line, the goniometer and many others that, however, leave the time they find.

Under the mighty body of the Doogee S90 we find a battery from 5050 mAh, which allows us to obtain one very good autonomy. In fact, by using it intensely we will be able to arrive without any problem at two full days di utilization who can also get to three days if we add also the powerbank module which integrates a battery from others 5000 mAh.

In that case, you should know that you will have to carry a much larger smartphone with you and that it will definitely make you feel in your pocket.

La recharge it's not very fast, in fact with the supplied power supply unit it will take more than two and a half hours to carry the Doogee S90 from 0 to 100%. Finally present also the wireless charging to 10W.

In any case I think the price be it anyway too muchor for a smartphone that yes, runs well, but that fails to fully satisfy in other areas such as software, connectivity, the camera and so on. The speech changes slightly if you think about it Banggood only the smartphone is available at 269 € and among others rugged phone then in that case it could carve out an interesting space.

The idea of forms is very particolare and this is probably what raises the price, but ultimately I did not find the mods very useful, so personally I would avoid buying them. 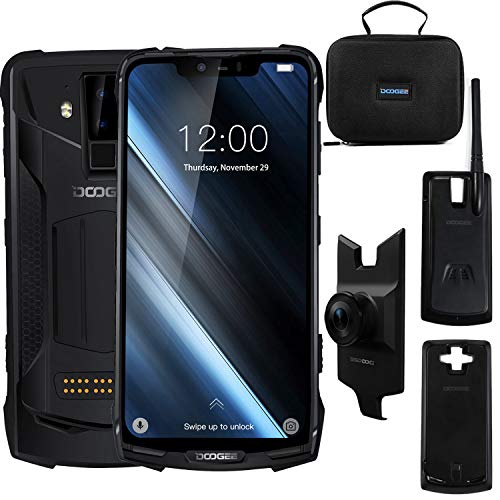 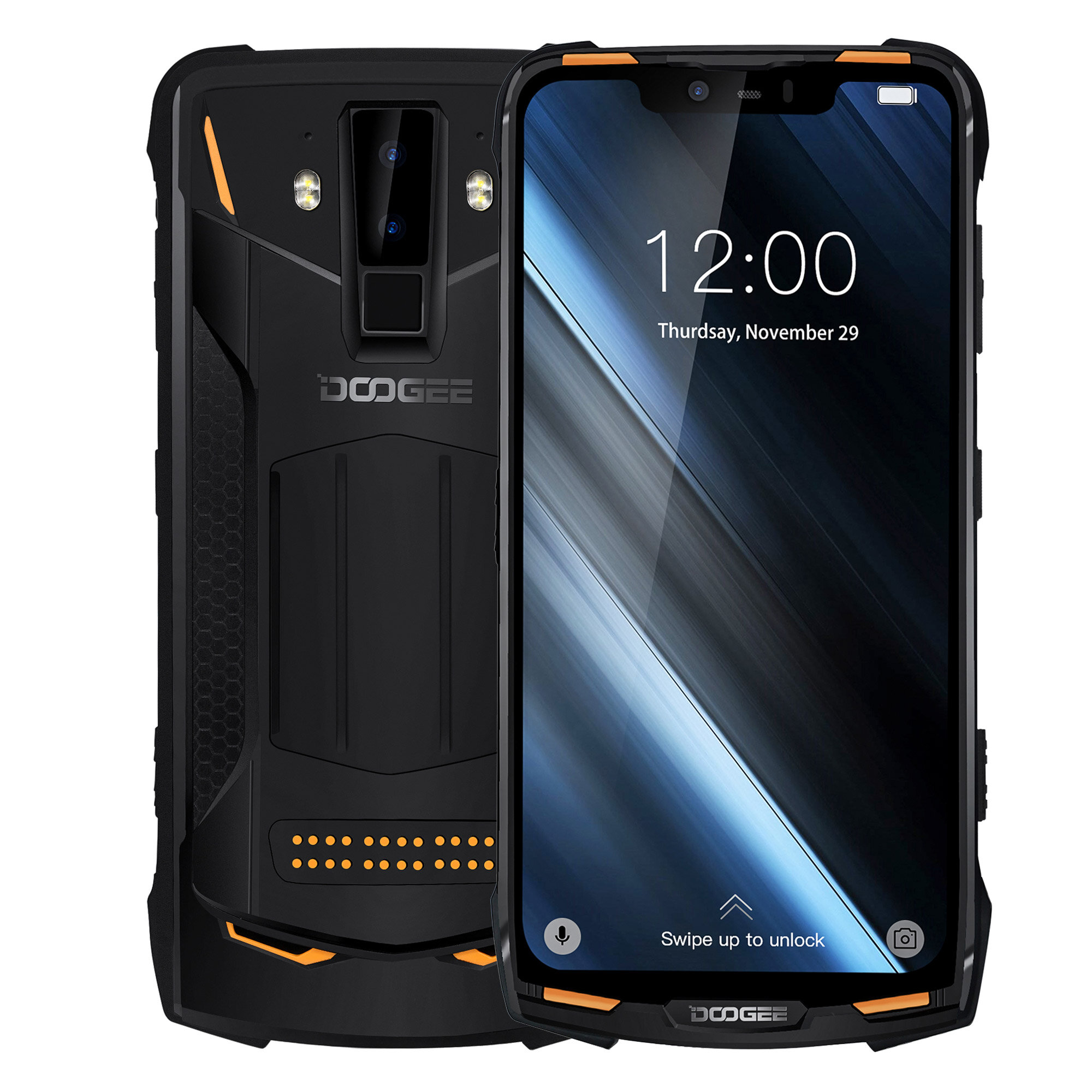