Fresh launch of the new Realme 3 Pro, comes yet another novelty for the brand. Apparently the Indian market - where the company is marked a whole series of successes - begins to become tight and it seems that Realme be ready to make inroads in China.

Realme soon also in China? The proof would be Weibo's official account! 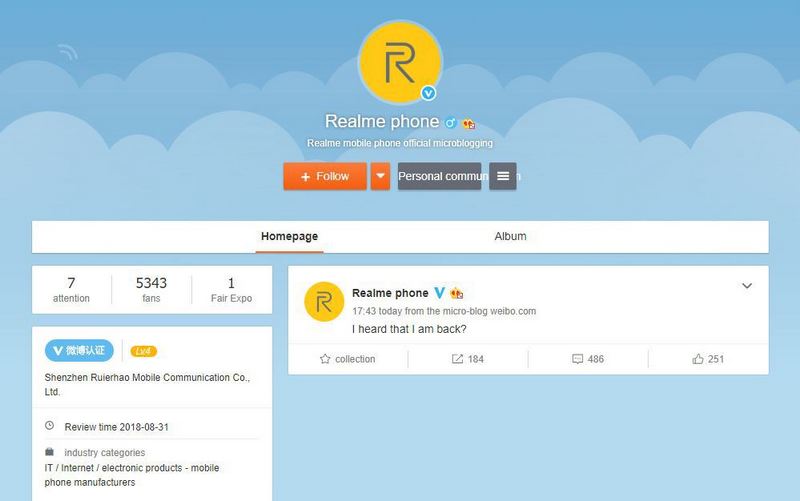 Even if there is not yet an official announcement, the Weibo page you see above speaks very well on its own. Realme was launched some time ago in India as a sub-brand of OPPO dedicated to the segment low budget; the main objective was to entice the public in the country with cheap devices and medium-range specifications and to go to the front the overwhelming power of Xiaomi.

Things went very well for the brand newborn, a lot to be separated from the parent company e achieve success in India. And now it seems that the next step for the company is entering China or at least that's what is shown by the new Weibo account.

It is also rumored that before the end of the year the Realme devices will also arrive in the Middle East and in Europe. What do you think of this brand so young and already so hyperactive? Are you curious to get your hands on one of your smartphones?

The CEO of Realme | Update

Today, 24 April, the CEO Li Sky (or Li Bingzhong, if you prefer), has officially confirmed the landing of the brand Realme in China. The manager published a long letter to announce this expansion program, citing the brand's aggressive pricing policy and the quality that distinguishes the Realme devices. Despite this it has not yet been confirmed which will be the first model to set foot in its homeland.