In recent weeks we have had the opportunity to try two very similar smartphones from the point of view of the hardware sector, but slightly different from the point of view of the design (at least the back). We are talking about the new ones Huawei P Smart 2019 e Honor 10 Lite, who want to conquer the band an entry level thanks to a good quality / price ratio. Let's find out who is the best of the two within our comparison.

To avoid repeating all the technical specifications during the comparison, we will leave the main features later. Also you can find the individual reviews ofHonor 10 Lite and Huawei P Smart 2019 simply by clicking on the names of the devices.

Although frontally theHonor 10 Lite and Huawei P Smart 2019 are completely identical, posteriorly have some small differences. More specifically, in our case the former owns one gradient coloring ranging from silver to blue, while the second is completely black. However, we would like to point out that the counterpart too Huawei has created a model with a nuanced coloring. 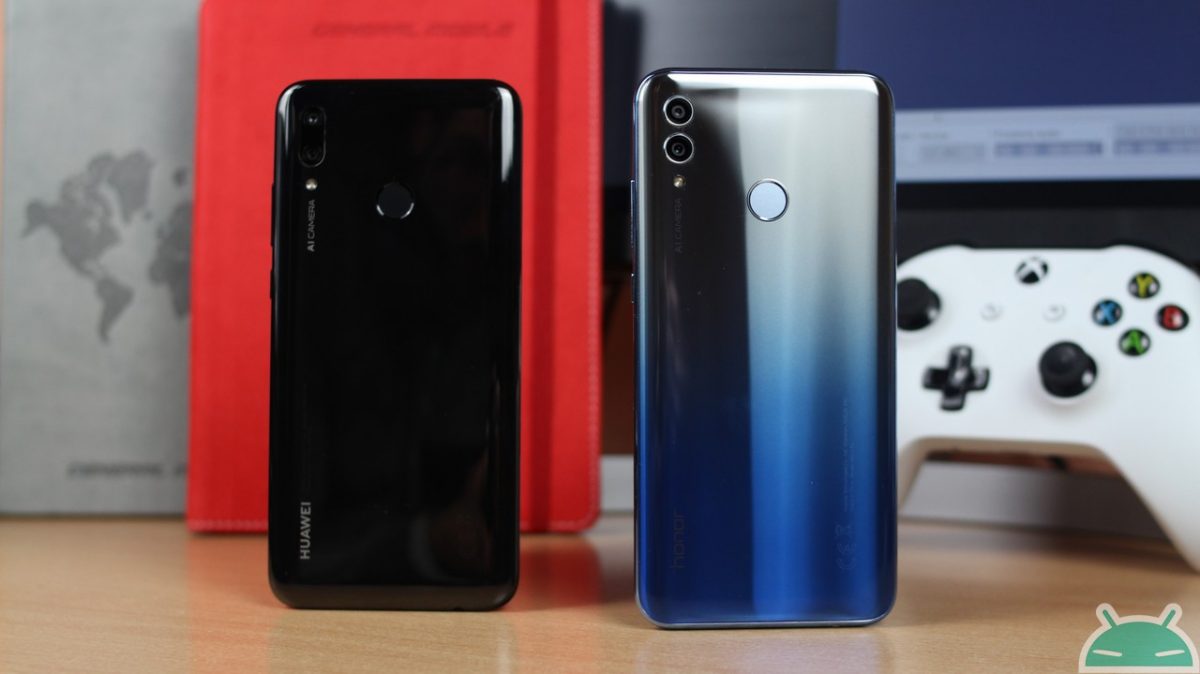 La difference main, therefore, lies in the style of the dual camera, as the sensors ofHonor they are separated from each other, unlike its rival which has a single block. Moreover, despite the dimensions and weight are practically identical, I have found a better ergonomics on theHonor, because it has softer sides that favor its grip. A flaw presenting both devices is that the back cover in plastic si scratching a little too easily and holds back too many fingerprints, which in the long run makes the smartphone slippery. We can solve the problem with the supplied cover. 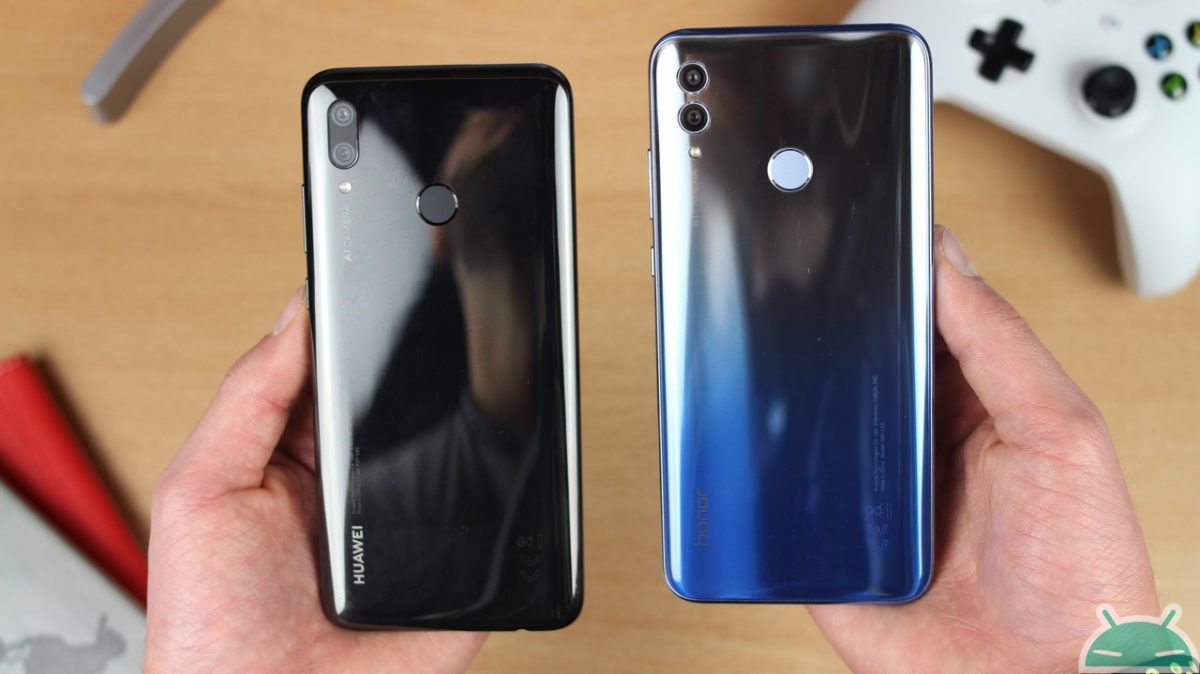 For the rest Honor 10 Lite e Huawei P Smart 2019 they are practically identical, from the front panel to the layout of the inputs and keys along the entire side frame. 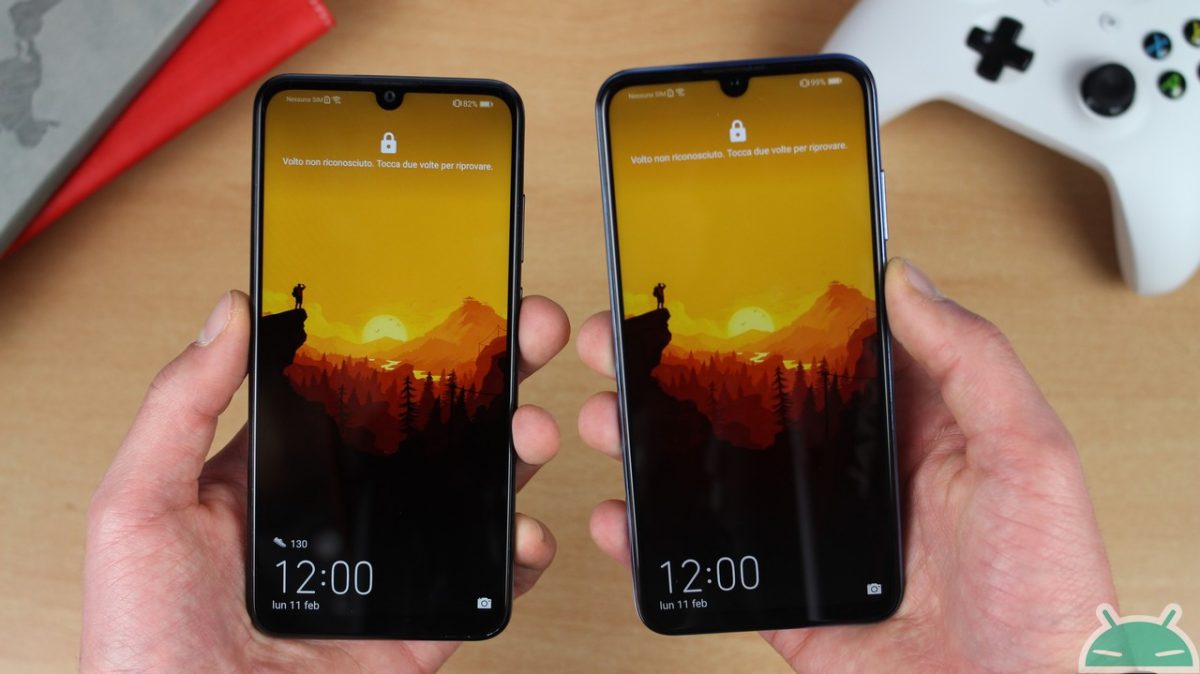 In fact, putting the devices in comparison you can notice how the Huawei have a light shade colderwhile we have one maximum brightness that goes hand in hand and that under the light of the sun reaches the enough without excelling. In fact, visibility is slightly reduced, but all in all we can carry out several operations without too many problems.

In all this, if you want to manage the color calibration at your convenience you can always go into the settings and change the hue and temperature.

As far as the hardware sector is concerned, there are no differences, as these mount the same chipset produced in-house, ie theKirin HiSilicon 710 with GPU ARM Mali-G51, 3 GB di RAM e 64 GB di internal memory expandable via microSD. 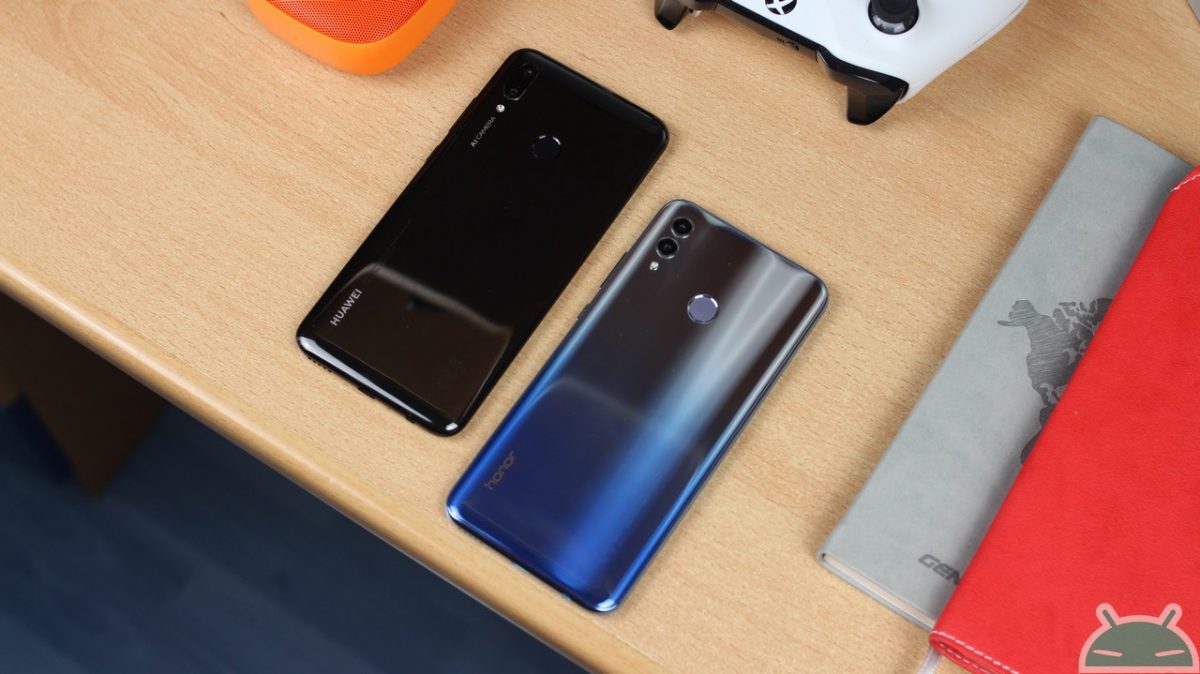 Here what is said in the respective reviews, or that i 3 GB di RAM they start to be a little too tight and when managing multiple operations at the same time it is not difficult to find small slowdowns o reloads. Obviously it will not be possible to make the game pushed to the maximum of details with heavy titles like PUBG, but the reproduction will be able to be fluid and without lag if we play with medium details.

In short, let's talk about two smartphones that are found below the 250 euro, we can not demand high performance, but 4 GB di RAM They would certainly have made more comfortable. As for the reading and writing speed, the benchmarks are practically identical and confirm what was said previously.

Although we have the same sensors back then it is not difficult to notice the differences between the two smartphones. In fact, we have one dual chamber da 13 + 2 mega-pixel which in daytime behaves quite similarly on the front of general quality and definition. The only difference is that the Huawei P Smart 2019 owns gods colors slightly more saturated with respect toHonor 10 Lite and all in all, maybe it's better this way.

If in good light conditions the two devices were practically even, at night they begin to see more marked differences, as the Huawei makes the shots more defined and less noisy than the other party Honor. For the rest, the color rendering and management of the lights is identical.

The evaluation is completely reversed if we talk about front camera, as this time we find the 24 mega-pixels dell 'Honor 10 Lite against i 16 mega-pixels of Huawei P Smart 2019. Needless to say, therefore, that the first wins hands down in terms of definition, general quality and brightness, although we must point out the colors much more saturated. In fact, even if we deactivate artificial intelligence, we have a greater saturation compared to its competitor, which seems to restore better color fidelity.

All in all I do not regret the yield of the shots of 'Honor and therefore I continue to prefer it. The differences are noticed even at night when we have very little digital noise compared to Huawei and a better definition. In short, this Honor 10 Lite it is confirmed to be one of the best selfie phone of the band entry-level.

I video they are registered up to a maximum of Full HD a 60 FPS and present in both cases digital stabilization. Apart from the colors, we say that there are no particular differences between the two smartphones both in terms of speed of focus and definition and stabilization.

Both devices have a single speaker, which has the same power but in this case Huawei P Smart 2019 has a more faithful reproduction of frequencies thanHonor 10 Lite. The difference is not abysmal and both tend to favor the highs and mids more, but the Huawei it has slightly more marked lows.

No problem in the headset capsule, while with regard to the microphone both suffer from the same defect, that is a captured sound a bit 'low.

Probably this is the sector that differentiates the two devices more, because while Huawei P Smart 2019 supports connectivity 4G + e Wi-Fi Dual Band, L 'Honor 10 Lite stops at 4G and to Wi-Fi single Band. However, with regard to the Wi-Fi modem I want to clarify that the other party Huawei he does not tell me about it 5 GHz band.

Despite this, however, I found a better reception and signal quality on Huawei P Smart 2019, who does not suffer from any kind of problem. Promoted both devices in satellite navigation thanks to GPS / A-GPS / GLONASS / Beidou and excellent presence ofNFC.

It seems almost repetitive to say, but also as regards the release we have the same options, or the fingerprint reader and facial unblock, which is obviously not supported by any type of infrared sensor. Also in this case, therefore, the two smartphones behave exactly the same way thanks to a precise reader, but not lightning. The facial release is fast in the daytime, while at night it takes a few fractions of a second longer. In fact, in this case it will be necessary to have set a brightness of the display above the 50% to ensure that the operation takes place without problems or slowdowns.

Honor 10 Lite e Huawei P Smart 2019 they are based on Android 9 Pie with personalized interface EMUI 9.0.1. The first one has the security patches updated to January 2019, while the second a November 2018.

As also for the other sectors, even here there are no differences. In both cases the software is fluid and does not present particular bugs due to poor optimization, if not some slowdown occasionally due to the management of processes that require a particular hardware effort.

Both Huawei P Smart 2019 that theHonor 10 Lite they have a battery from 3400 mAh, but with my use I managed to get better results on the first device, because with stressful use I found one medium about 5 hours of active display, unlike the 3 hours and minutes 30 dell 'Honor 10 Lite. However, with the new update, the autonomy has improved slightly.

Unfortunately, these two smartphones do not support fast charging and will be needed around 2 hours to get them from 0 to 100%.

In conclusion these two devices seem to be extremely similar among them, but present some slight differences that can make us prefer one to the other. In this case the decisive element is perhaps the connectivity, because it is clear that the Wi-Fi single band and failure to support the 4G + they penalize not poco l'Honor 10 Lite.

However, the latter seems to be slightly ahead with regard to the display and in great advantage on the front of the camera, even if the rear camera is worse than the Huawei P Smart 2019, as well as autonomy.

Speaking then of the price, the Huawei is available on The Amazon at the price of 248 € (bundled with the transparent cover), while we find theHonor to 215 euro. In this band 30 € difference may not be few, because in this gap you can find a myriad of different smartphones, but for the quality / price ratio the Huawei P Smart 2019 it is confirmed as the best of the two.

Hype for Nothing Phone (2)? The wait won't be short