In recent years, streaming services are becoming more popular, so much so that the sale of Smart TV it is no longer a novelty. Netflix, Amazon Prime Video e Spotify these are just some of the applications that, slowly, have conquered the entire entertainment market, dominating the scene. In fact, the most passionate users have subscribed to several subscriptions, requiring new ones platforms within which these services can be exploited.

On the one hand, however, the frequency with which consumers replace their television sets is not at all comparable to the average recorded in the smartphone field. As a natural consequence, therefore, many people do not yet own a Smart TV, precluding the possibility of surfing the internet and exploiting all the applications mentioned above. What is the best solution? Obviously, a TV Box! And today, in particular, we see how it behaves Xiaomi Mi Box S.

The sales package shows different features of the product, focusing more on the ability to view their video content at a higher resolution than in the past. Inside we find:

From an aesthetic point of view, Xiaomi decided to slightly modify the shapes of this TV Box, implementing more squared and regular lines compared to previous models. What does not differ, however, is the type of matter used. The whole structure is, in fact, made of plastic. However, such a factor does not constitute a defect, since the object is substantially solid and well-assembled. 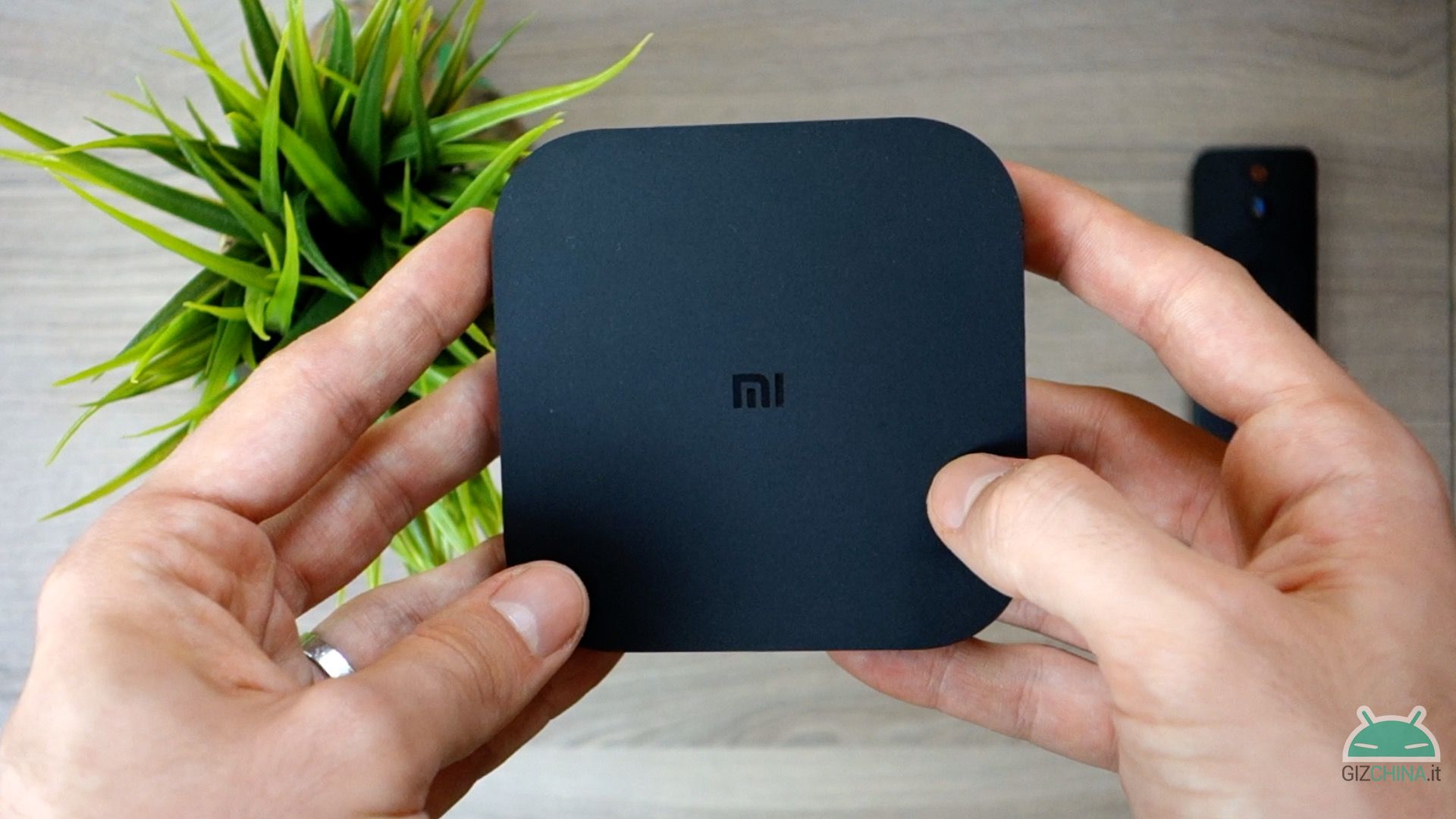 The upper part reveals the logo of the company, which was slightly carved into the body. Below, on the other hand, we find four plastic feet and some accessory information. From a practical point of view, however, it would have been perfect if the support parts had been made of rubber, so as to guarantee greater stability. In any case, however, the dimensions they are not excessive. Xiaomi Mi Box S measure 95,2 x 95,2 x 16,8 millimeters weight total of about 300 grams. 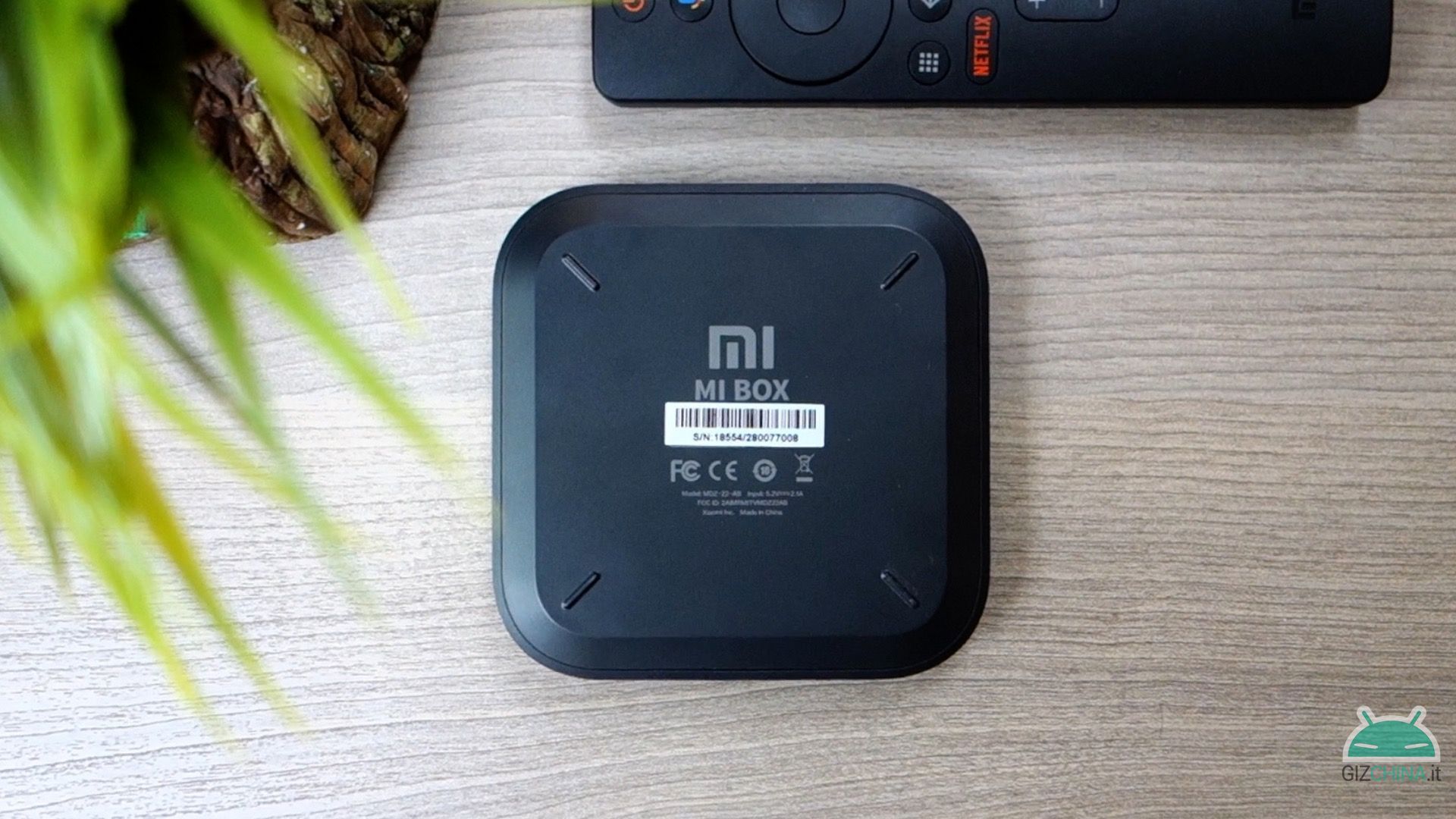 The lines are treated in detail, showing a design that I personally appreciated. Furthermore, on the rear profile, we find the entire equipment of doors. Starting from the left we have aaudio output (type S / PDIF), one entry HDMI, a door USB 2.0 and the hole for thesupply of the TV Box. 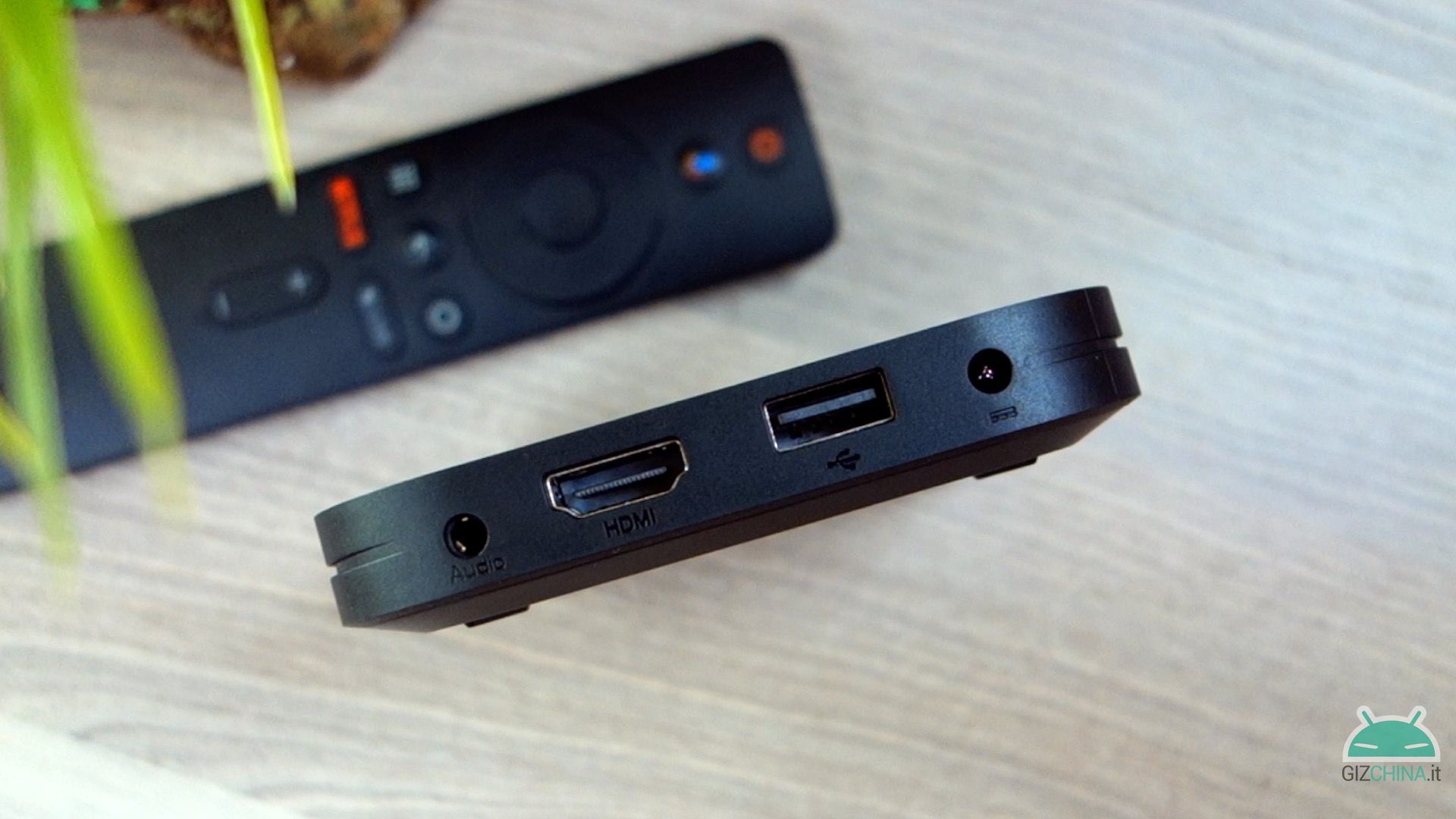 During operation it is possible to glimpse a small one LED white, set in the front frame.

Xiaomi Mi Box S presents a chipset Amlogic S905X, with 64-bit Cortex A53 quad-core processor with a maximum clock frequency of 2.0 GHz. The RAM DDR3 it's alone 2 GB, with GPU Mali 450 da 750 MHz. The internal storage instead, it counts on a unit (eMMC) from 8 GB, of which only 5.3 GB they are available for data storage. We also find the Bluetooth 4.1 and a form Wi-Fi Dual-band to 2.4 / 5 GHz which offers excellent coverage.

The hardware on board this TV Box allows you to easily navigate the entire interface, demonstrating one process management really satisfying. In fact, during the whole trial period, I did not find any bugs or sudden system crashes. Also the applications dedicated to streaming, like Netflix o Amazon Prime Video, do not accuse lag and problems of any kind. This device then has the certification Widevine L1. On this model, moreover, Xiaomi has really aimed at many resources, squeezing the available components to the maximum. Unlike previous versions, Mi Box S is able to play any video content. The device supports, in fact, 4K video HDR with hardware decoding, including formats H.265 10-bit and H.264. All the tests carried out did not show any criticality from this point of view, with the heaviest files that, except for some uncertainty, can be reproduced almost perfectly.

All hardware limits come out only with some videogames titles (See Real Racing 3 e Morphite), which are not able to offer a good frame-rate. The Play Store, in any case, offers a fair number of games compatible with a Bluetooth controller, with which you can fill your moments of leisure. 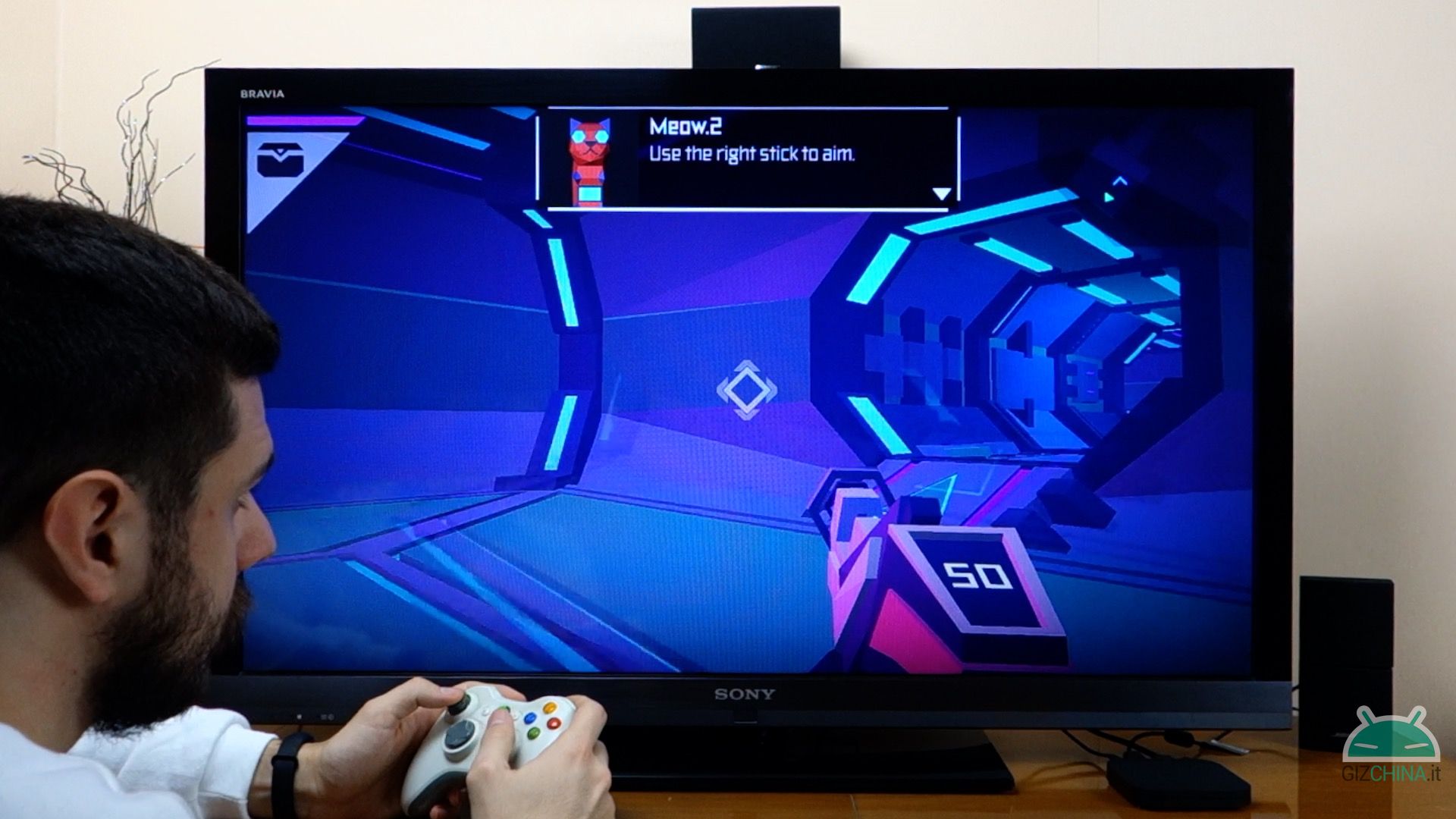 Mi Box S is moved by Android TV, in the version 8.1 Oreo. From this point of view, therefore, the interface is one of the simplest and most streamlined on the market. The various applications can be organized in an orderly manner, placing the most used in the main screen, one after the other. The system also offers the possibility to show the previews of the various contents proposed by the individual services. 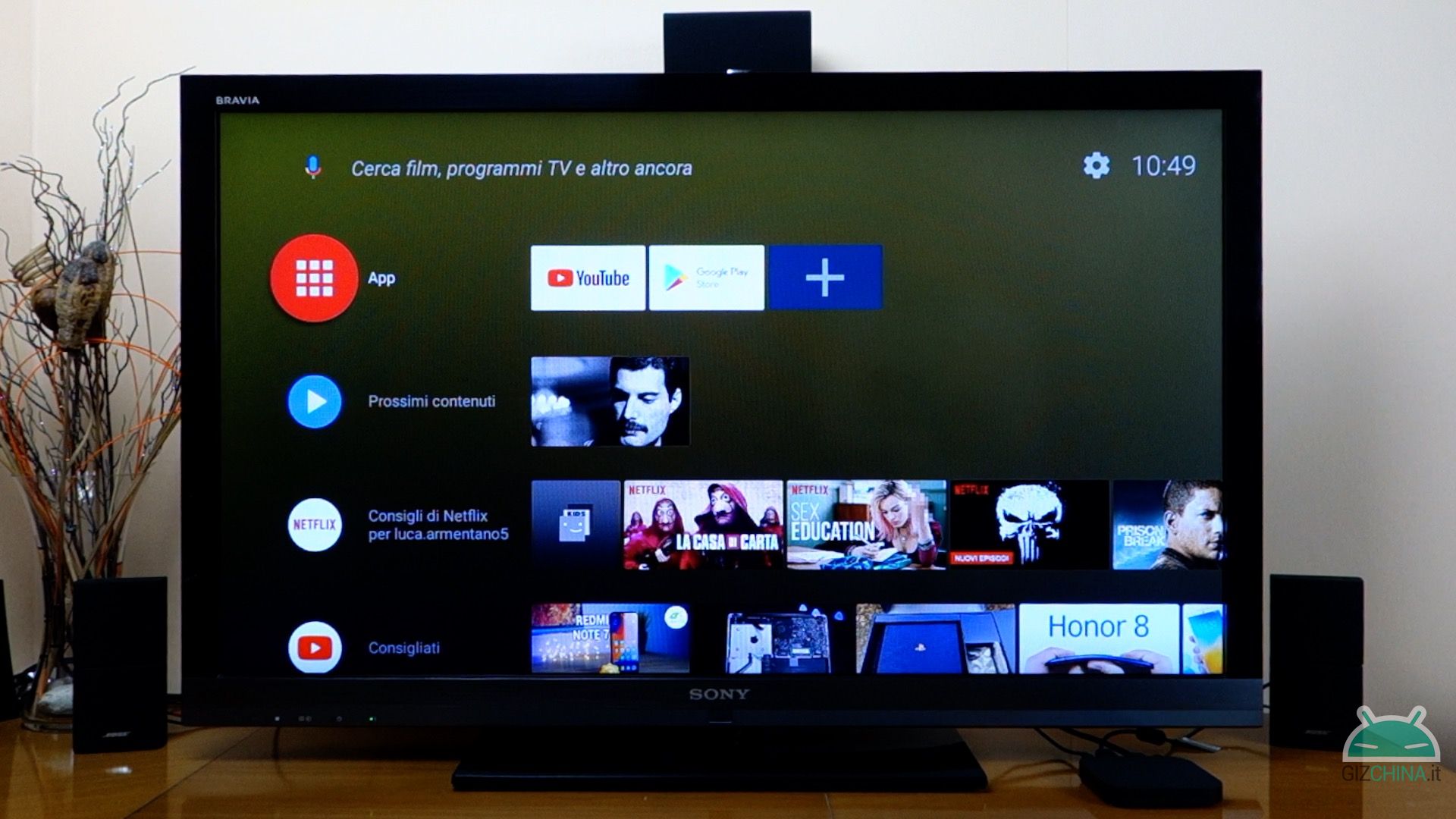 The advantages deriving from the introduction of a system of this type are many, starting from settings. By clicking on the wheel at the top right you can access, in fact, all the items concerning the management of the system, without there being an excessive dispersion of information. Compared to Nvidia Shield TV, which I currently consider to be higher than any other TV Box, missing multitasking, which can be useful in many situations. It is true, however, that Mi Box S costs less than half.

The function chromecast it is integrated, further enriching a very wide experience. Using this tool you will be able to stream the image of your smartphone on your home TV. This service, however, is not the only one present. With the supplied remote control you can recall, in fact, theGoogle voice assistant, thanks to which to manage not only the interface but also all connected smart devices. 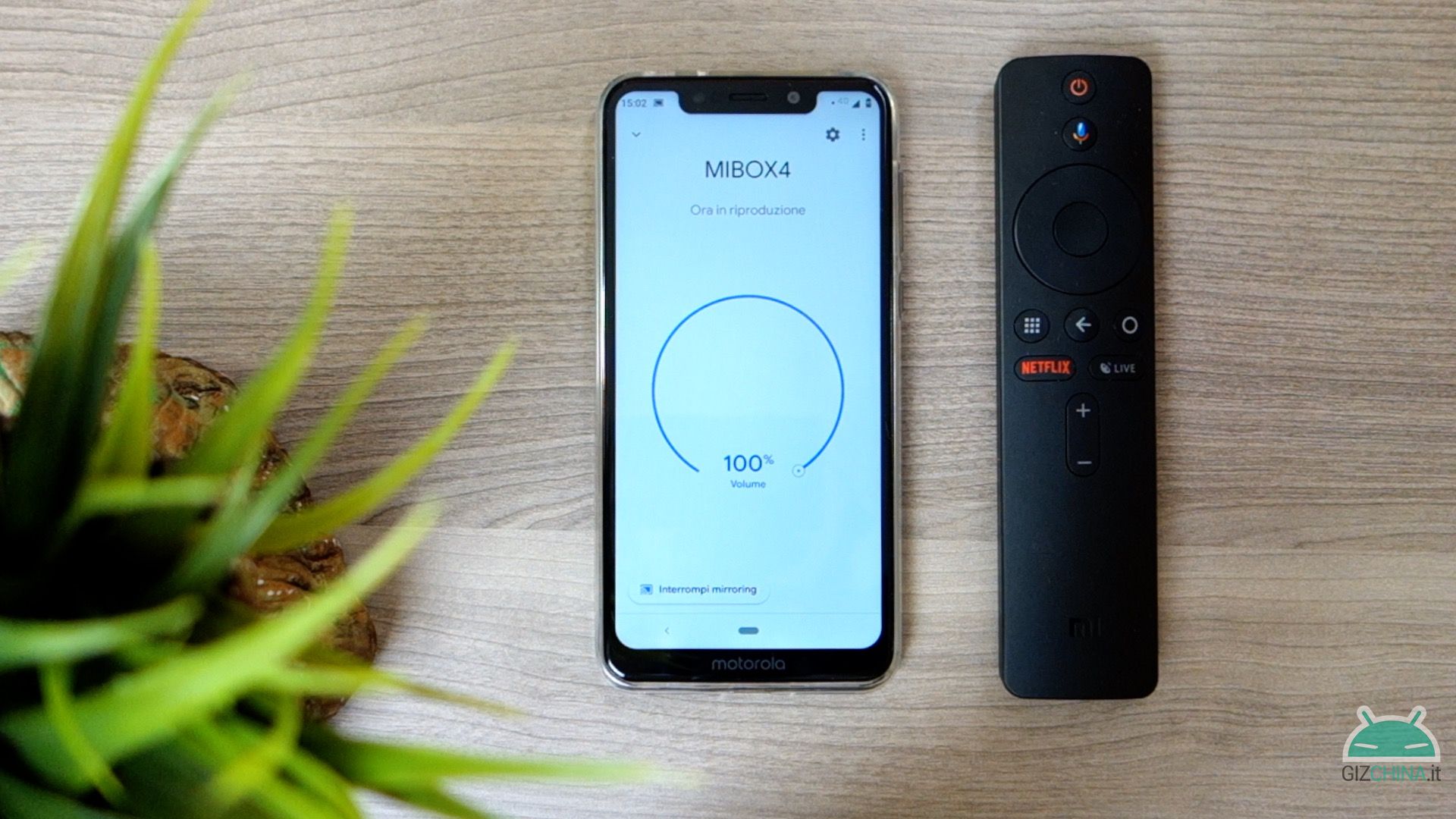 It is not possible to find all the applications we are used to finding on our smartphones. Amazon Prime Videofor example, it does not find space on the Android store and to be able to use its contents it will be necessary to have an external apk. Installing any File Managerin fact, users can make better use of the entire system by checking all the internal folders.

The remote control of the Mi Box S is entrusted to a remote control that, for the first time, presents a concept more suited to a device of this caliber. Made completely in plastic and driven by Bluetooth connectivity, offers a series of keys on the front, as well as the company logo in the lower section. Starting from the top, we initially find the key ON / OFF, the command to activate theGoogle voice assistant and selector to move freely within the interface. Lower down are three main keys: the first opens a window containing all the installed apps, the second allows you to go back to the previous menu, the last one directs the user directly to the home. 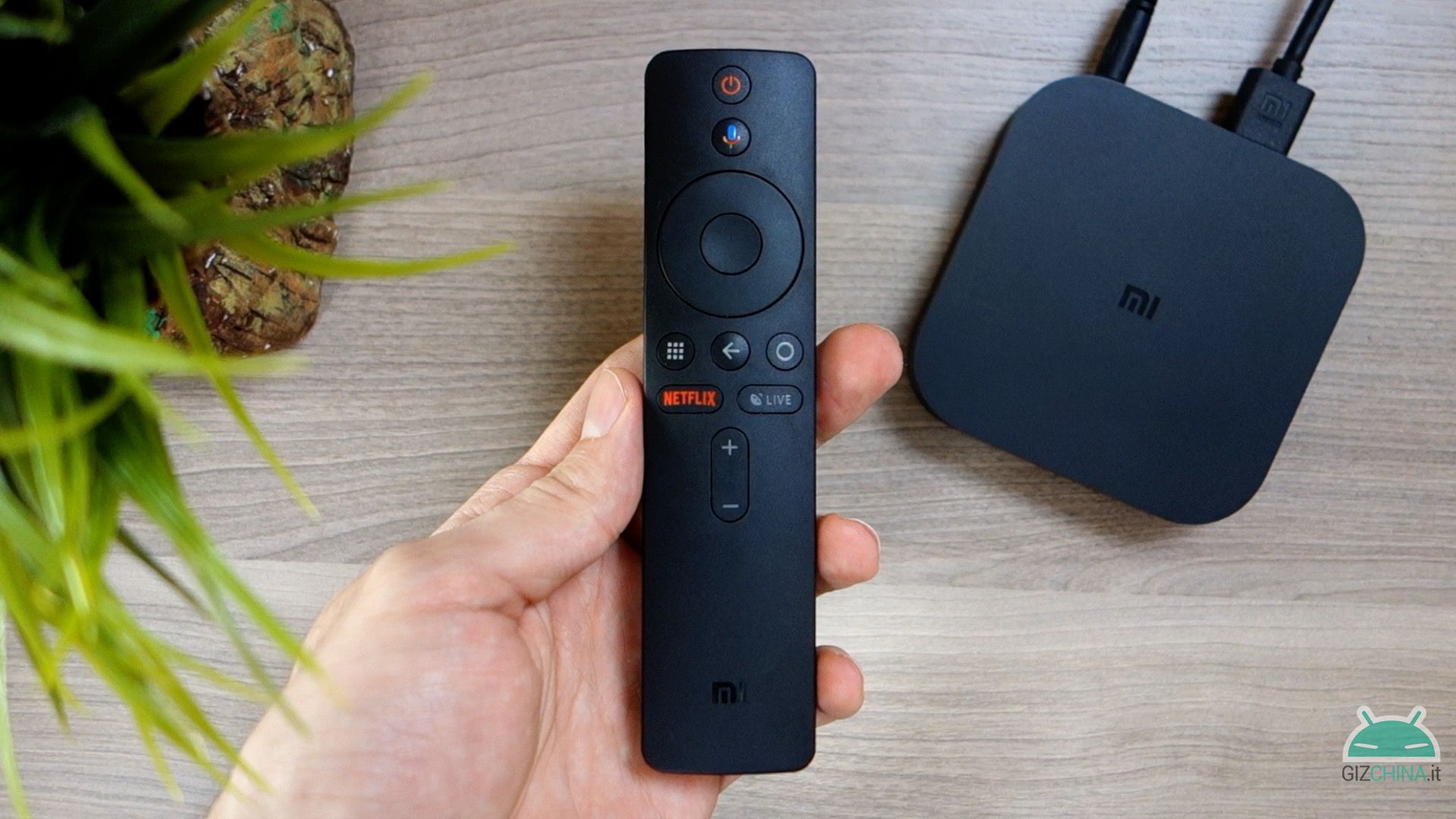 A dedicated button is not missing Netflix, cosím come il audio selector. The command "Live"Probably refers to some particular contents but I could not understand how it works.

Xiaomi Mi Box S has a price that fluctuates between 70 € and the 80 euro. On most online store it is possible to periodically take advantage of some discounts that can bring down the price of other 10 euro, reaching a total of about 60 euro.

To these figures there are no competitors that can stand comparison, because currently the setup offered by the device is the best on the market. Android TV and the ability to take advantage of video content in 4K are two fundamental features, increasingly requested by users. The remote control supplied, then, does its job well and was designed in the right way, facilitating the consumer in every aspect. For those who like to carve out a few moments of leisure, dedicating it to Games, there is the opportunity to take advantage of some less satisfactory titles of the Play Store in a satisfactory way, without demanding anything more. For everyone else, fans of TV series and film, there should be no doubt, because this TV Box is just what they were probably looking for.

Sony beats Samsung: it owns the market for photographic sensors

Apple wants its first foldable to be much more durable