In recent months we have reviewed a good number of notebook from Chinese market. Although the characteristics of the different products tested were different from one brand to another, they all belonged to a low price range. And the Teclast F5 of which we speak today is no exception from this point of view, proposing itself as a versatile device and suitable for an extremely heterogeneous public. But between the different notebooks on sale, will this Teclast F5 to stand out on the competition? Find out in our review!

The sales package, in white color, is very aesthetically cured, with some brief information on the hardware characteristics of the product on the back. Inside we find:

Teclast F5 is characterized by a shell made entirely of metal, with satin finish. The entire surface holds very few fingerprints and returns one strong sense of solidity, without revealing any crunching. Moreover, the dimensions of the product are really small and what makes the difference, in this case, is the weight. You can view on a precision scale 1025 g, which make it so light and compact that can be inserted into any medium-sized backpack. 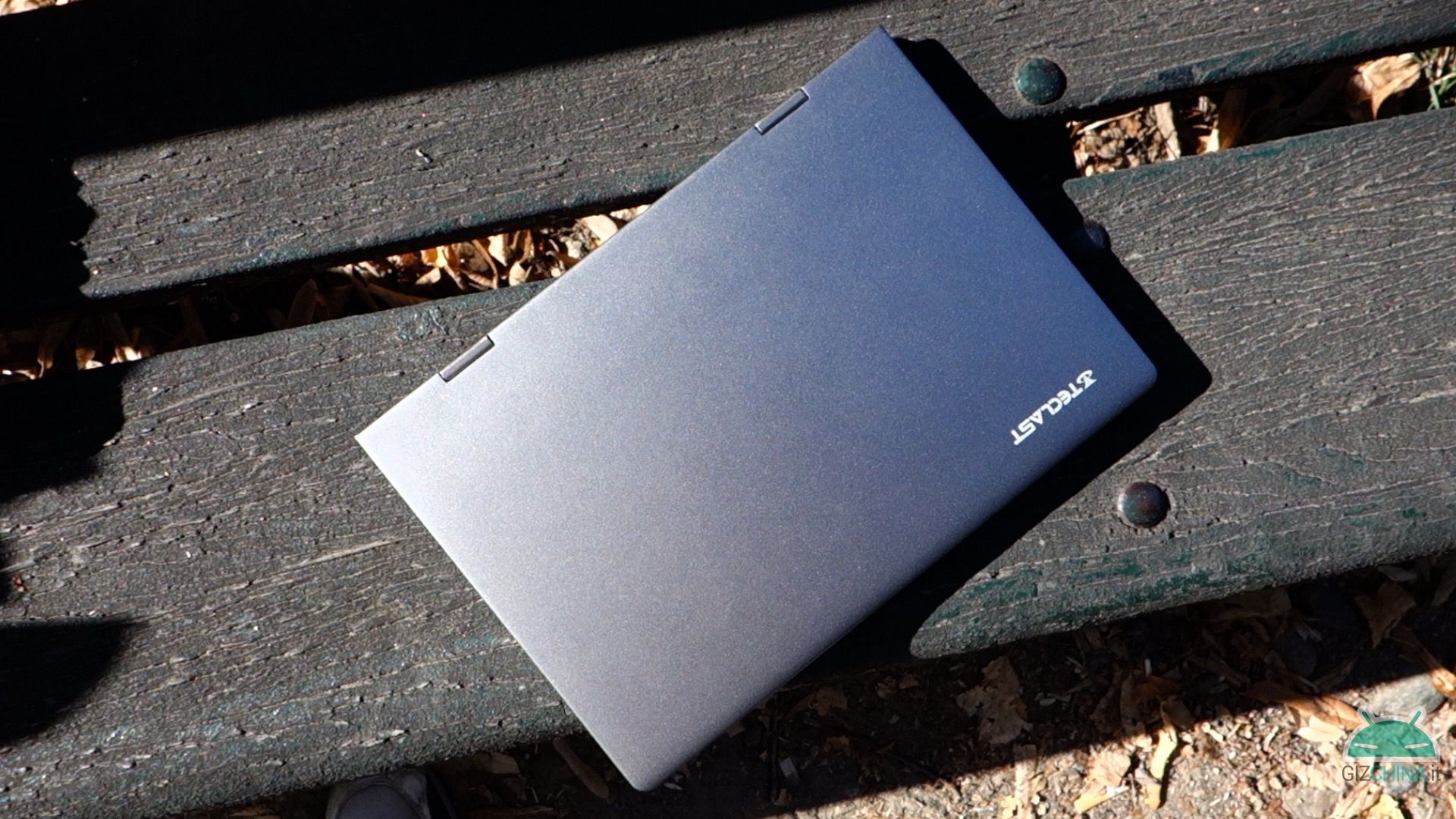 The design does not differ much from that proposed by many other competitors, with quite sinuous and clean lines. The back part is characterized, instead, by a greater angularity and by the presence of the two hinges. The latter are not perfectly parallel to the structure and tend to touch the surface above each time the notebook opens. This aspect is reflected in one loss of enamel at the most protruding point of the hinge, a problem that could further accentuate over time. 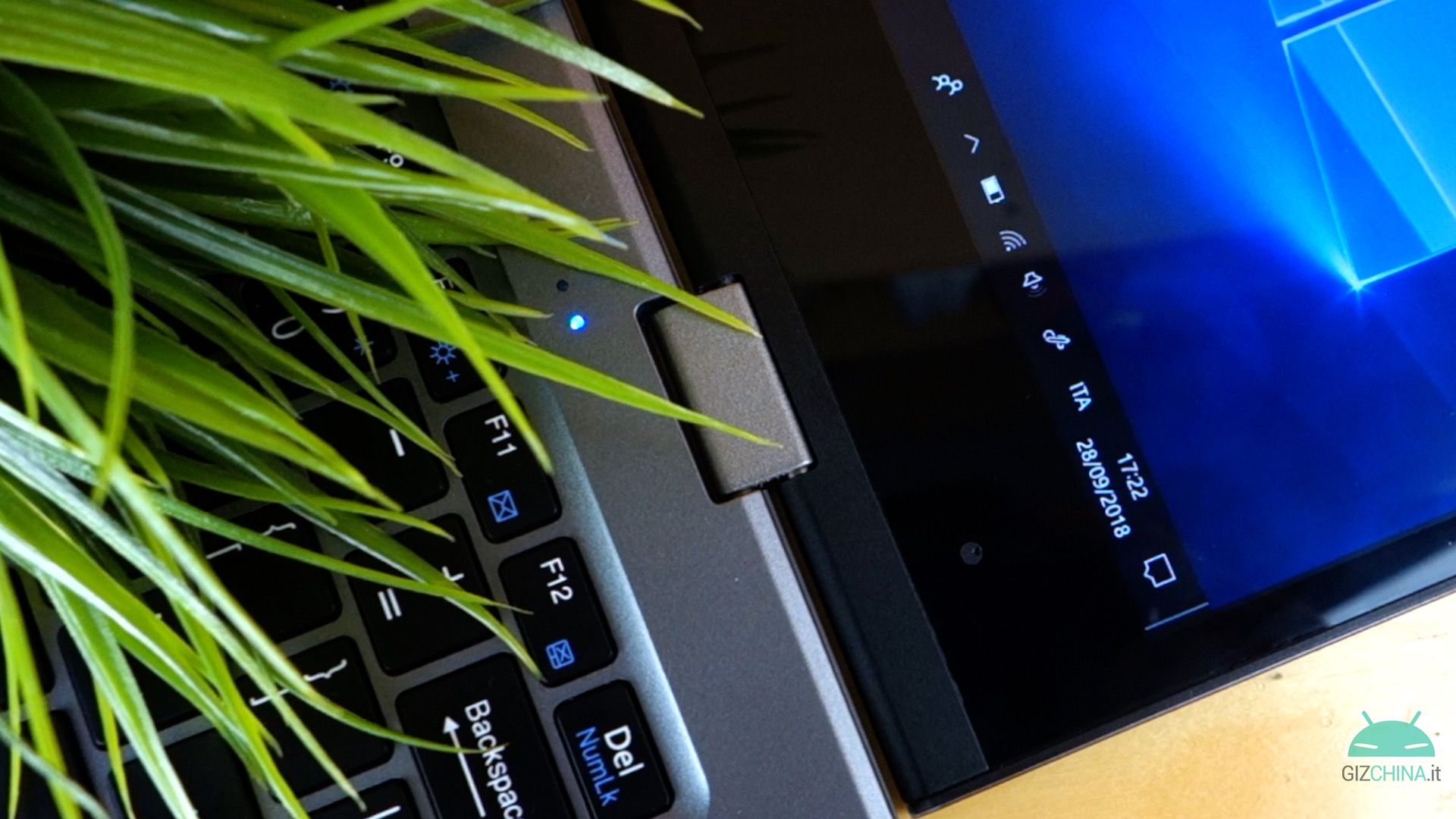 Despite its compactness, the Teclast F5 is characterized by a fair initial allocation of input / output ports. The left side houses, in fact, the entrance mini-jack for headphones, the Power button, the volume rocker, the first one microphone and, further down, one of the two speaker lateral. 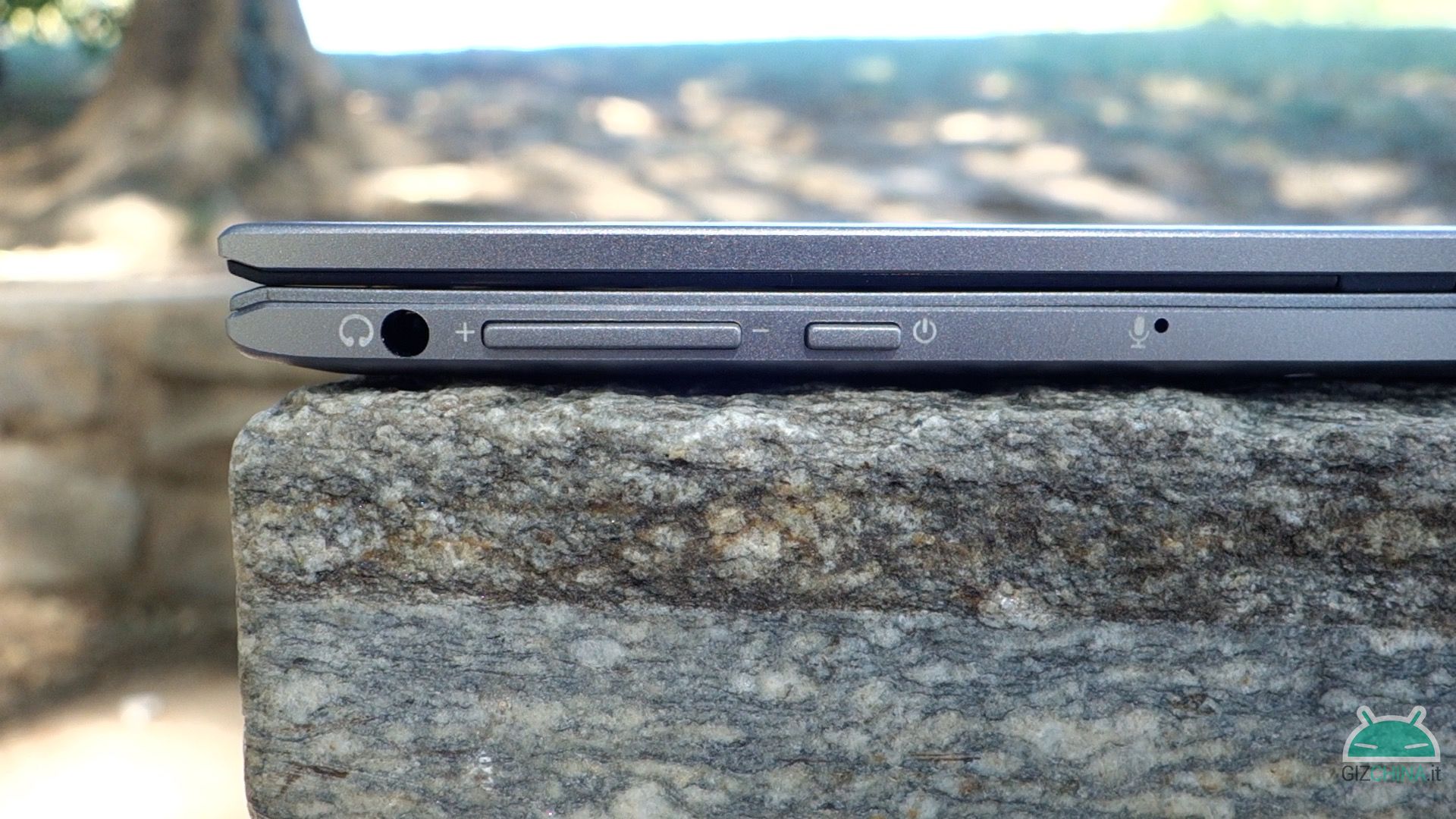 On the right we find the entrance instead USB Type-C, mainly used as a door of recharge of the notebook, an entry mini HDMI, the status LED, the door Micro USB, The second one microphone, the compartment for inserting a card micro SD and the second speaker.

Turning the 180 grades notebook we can appreciate the presence of 4 solid grommets and various visible screws, one of which can lead us directly to the compartment in which the SSD is inserted. By using a normal star screwdriver you can, in fact, unscrew the screw that holds the door at the top, with the Possibility of replace the SSD da 128 GB at any time. 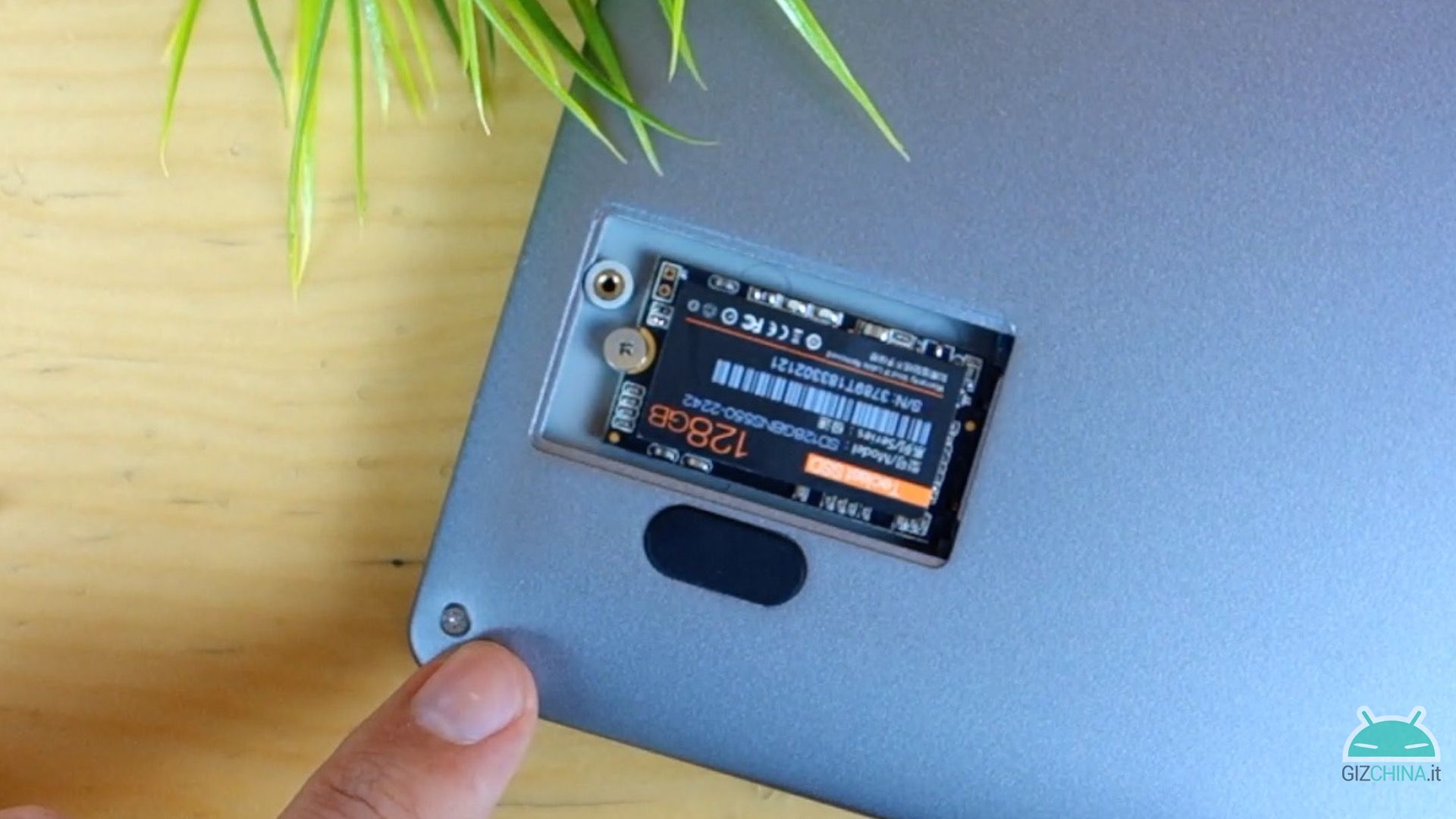 La keyboard is not backlit and presents the American layout. Despite the compactness of the product has not allowed more distance between the keys, their stroke is very short and decisive, running into very few typing errors. Unfortunately, the plastic covering the front surface flex slightly too much in some points, but in the writing phase the problem is really marginal.

Poco further down the keyboard we find the classic touchpad, which on this model you convinced me. Its smooth surface allows you to slide your fingers well during scrolling and the various gestures never conflict with each other. It rarely shows itself poco responsive, giving a satisfying experience overall. 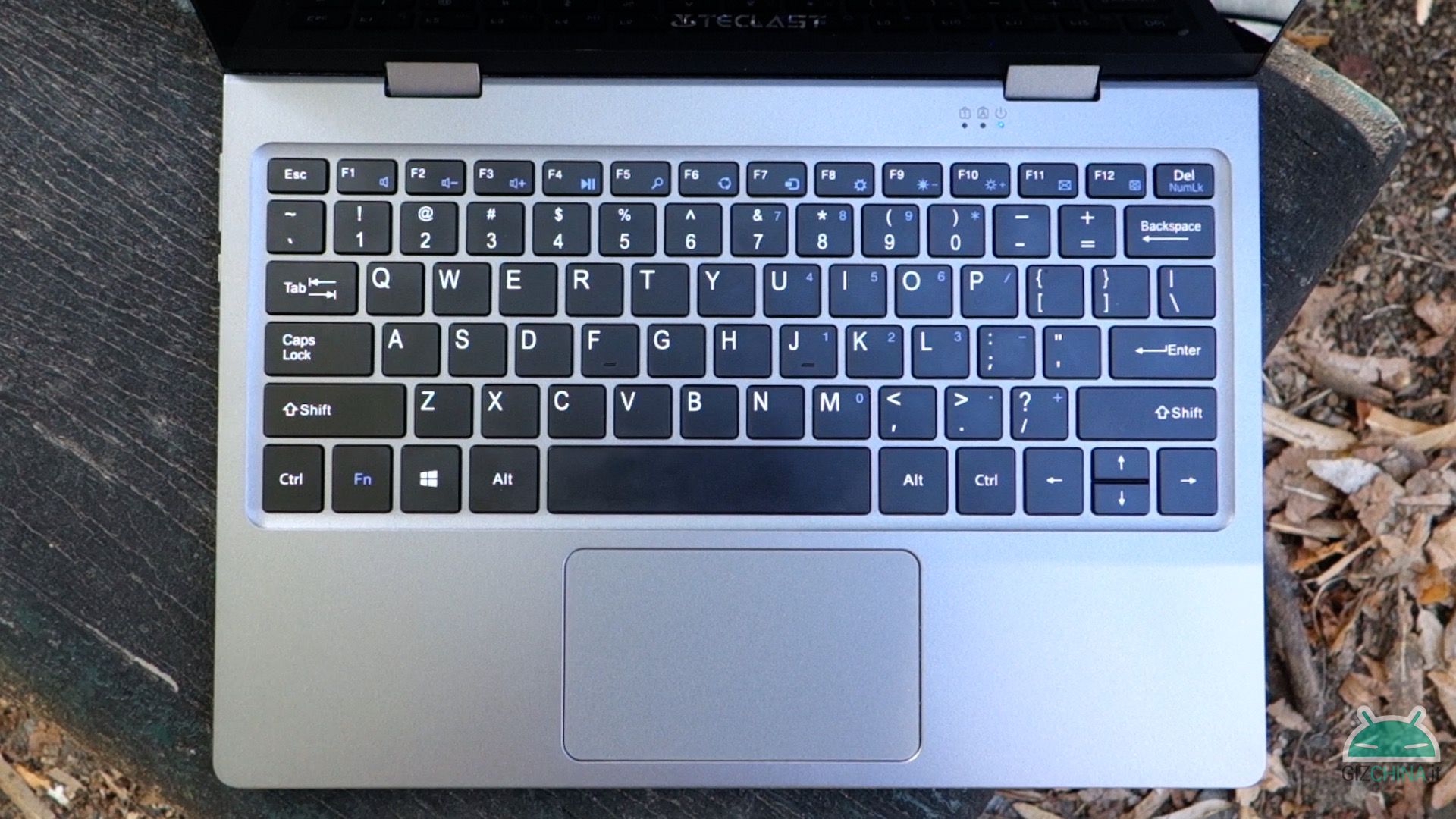 The Teclast F5 has a matrix display IPS da 11.6" Full HD (1920 x 1080 pixels) and report in 16: 9. The colors are quite faithful to reality, with a screen temperature that slightly tends to cold tones. The surface of the panel, unlike other competing products, it does not have an anti-reflection treatment and this creates some external problems. In addition, the maximum brightness allowed on the Teclast F5 is very small, resulting insufficient in the areas most illuminated by the sun. 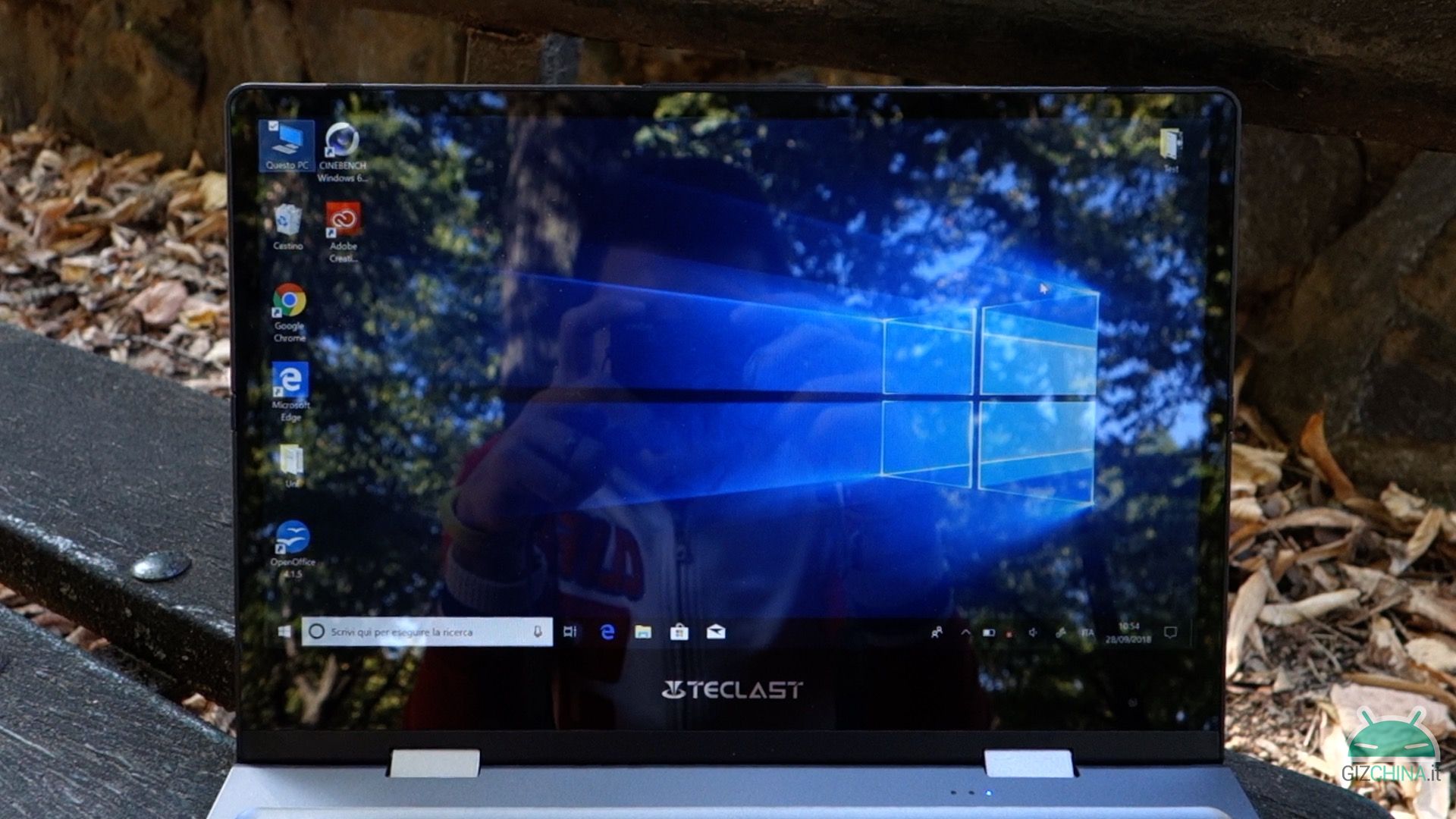 The feature that makes it a more versatile product than many others, in its same market range, is the touch display. The latter works very well and the notebook is also prepared, among other things, to be used with the relative stylus of Teclast, sold separately.

This feature, in any case, is not an end in itself. In fact, Teclast F5 owns one 360 ° reclining screen, which allows it to be exploited in different ways. It can become, for example, a sort of tablet, thanks to the presence of some design applications pre-installed in the operating system, or a real tablet. 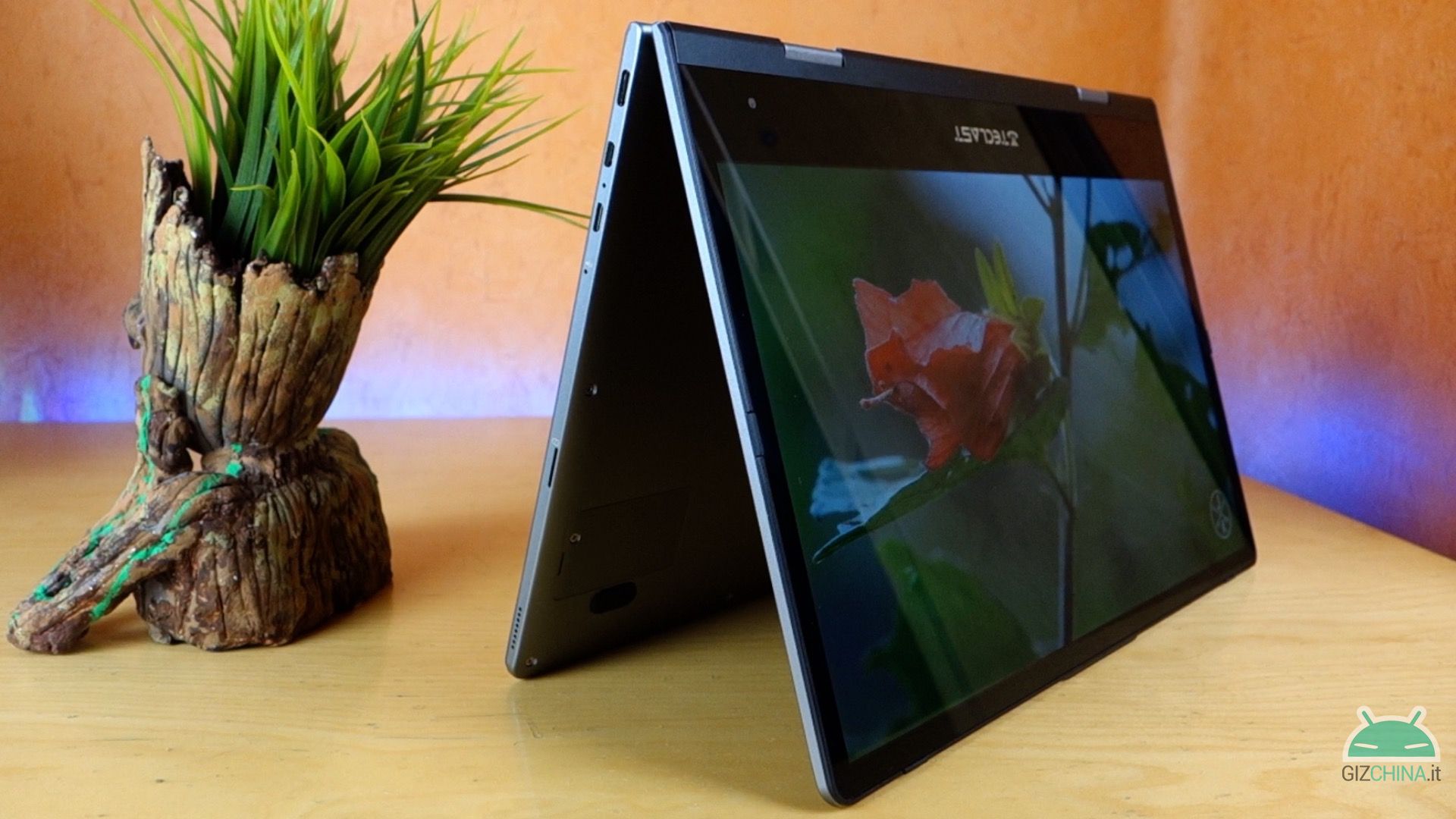 La tablet mode I have not been able to fully test it during the tests, because by reclining the screen to the maximum of its possibilities, the notebook constantly entered standby. To unlock it, it was necessary to bring the display to a lower angle, automatically exiting the standby mode.

The hardware on board the Teclast F5 can count on a chipset Intel Celeron N4100 Gemini Lake made a 14 nm. So let's talk about a CPU quad-core with clock frequency equal to 1.1 GHzz, with Turbo Boost up to 2.4 GHz. The integrated GPU, on the other hand, is one Intel HD Graphics 600 with a base frequency of 200 MHz and maximum of 700 MHz, capable of playing 4K movies with 60 fps.

As for the memories we are in the presence of one RAM DDR4 by well 8 GB and a SSD da 128 GB for internal storage. Software side we always find Windows Home 10, Also in Italian language. The question that immediately arises is: with a hardware of this level what can be done?

The Teclast F5 manages to manage several windows up well Chrome, at the same time as some package programs Office, Photoshop e Spotify. Even on Youtube there is no big problem, struggling a little more when playing a movie in 4K, which could give away sometimes some lag.

Obviously the CPU is not able to optimally manage the processes related to programs video editing, such as Premiere or Sony Vegas. You can enjoy some light fitting, taking advantage of the basics of the program of your choice, without risking anything more professional. And the same goes for Photoshop, where a slightly wider maneuvering space is allowed, but still quite limited.

During the stress test le temperature exercise have never reached worrying values, settling on an average of less than 70 ° C. These values ​​are very positive for a notebook without fans that relies on one passive cooling system. Externally the only part that remains warm, even in moments of greatest stress, is the right side of the keyboard, at the CPU.

As for the graphics, this Teclast F5 relies on one Intel HD Graphics 600 mentioned above. With this hardware component it is possible to reproduce contents videos in 4K and dabble on some game in the Microsoft Store. Using Asphalt 9 o Modern Combat 5 they register about 40-60 fps, with a discreet and absolutely satisfying playability. This notebook, however, is not designed for editing or gaming, as shown by the benchmarks below, which show the real performance of the device.

The Teclast F5 is equipped with a module Wi-Fi b / g / n / ac Dual Band that allows you to surf in peace even in the less covered areas of the house. Then there is the Bluetooth 4.2 that works well and with which there is no problem. Although the notebook does not present a real entry USB, in a Teclast package, offers a adapter to connect to the door Micro USB, so that you can also use your own data transfer key.

In addition to these components, the company has decided to equip the product well two speakers lateral. The quality expressed by the two units is discreet, even if they do not offer an excessively high volume, so that in noisy environments it will be necessary to have a pair of earphones.

Teclast F5 is also equipped with one webcam front, located at the bottom right, from 1 mega-pixels. Through this element you can answer calls on Skype or entertain with your friends on some video-chat. Furthermore, the quality of the two microphones it is good, allowing you to converse with your interlocutor without any particular problems. 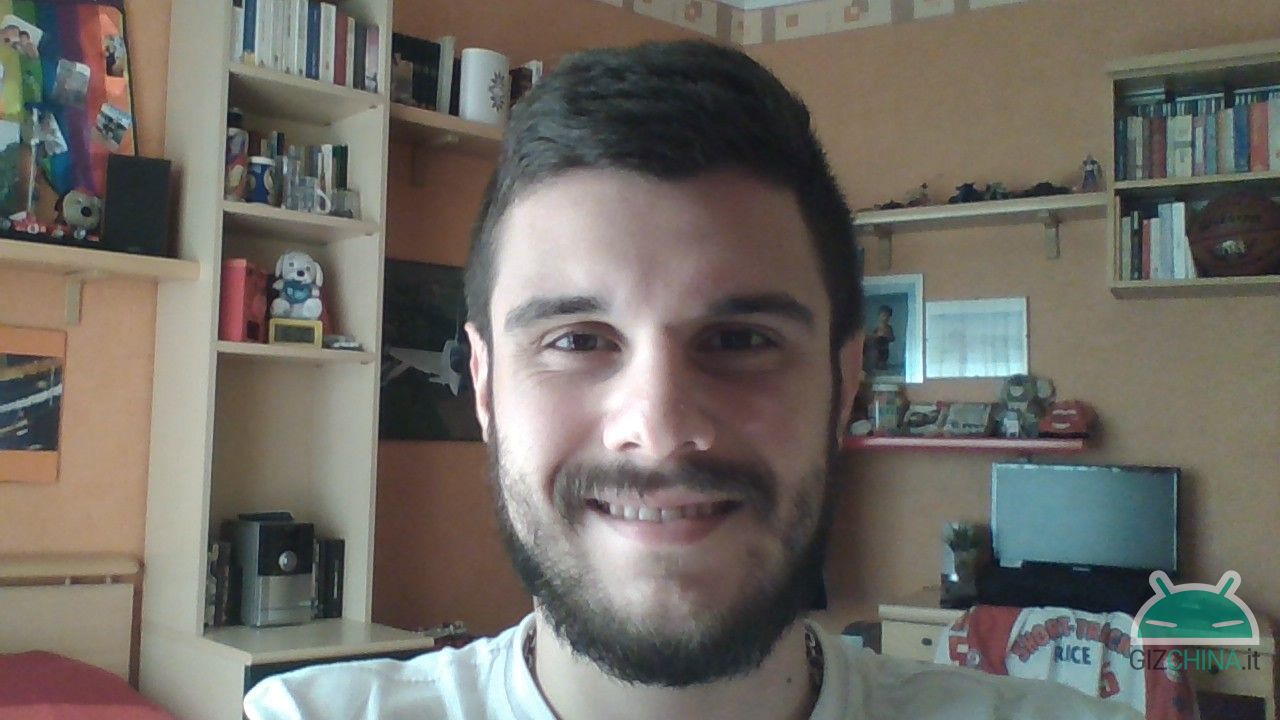 The Teclast F5 mounts a battery from 3850 mAh that does not allow him to finish a day of use in the evening. Always keeping the maximum brightness and using mainly Youtube, Word, web browsing on Chrome and, in small part, Photoshop I totaled about 4 hours on screen turned on, with one more 10% of residual battery. In standby the device does not consume particularly, allowing us to exceed even the 6 hours with a very bland use.

La recharge it is not very fast but can be considered satisfactory enough, using approx 2 hours and minutes 15 for a complete cycle.

Il target of this Teclast F5 is theacademic, which from the professional point of view does not have many pretensions. The notebook is from good quality on a constructive level and returns satisfactory performance to enjoy movies or videos on Youtube, also offering a good experience in all the school productivity.

Thanks to the versatility offered by its features, allows you to contact a more creative audience and less conventional, which needs to always carry with it a device that can also perform functions out of the ordinary. And the compactness, in this case, plays a role that is certainly fundamental. The only ones critical issues they concern the keyboard, which with the American layout it could initially create some problems, and the fact that the tablet mode is, for now, just an illusion.

Currently the Teclast F5 is available on Gearbest to a figure that is around 300 €. In the event that the price should go down further than 20-30 euro, it would make this product even more attractive.

OnePlus 10T comes to a bad end in endurance tests