In today's comparison we decided to compare two of the most purchased smartphones among them high-end, Or the OnePlus 6 and Xiaomi Mi 8, which are characterized by a high quality / price ratio. In fact, after the many requests that have arrived in recent weeks we decided to bring a focus on these two devices to help you understand what is the best choice for you with a maximum budget di 400 €.
So let's not lose ourselves in further talk and let's analyze them in our comparison!

Let's start immediately by saying that these two devices have really very similar dimensions, in fact, while the OnePlus 6 measure 155.7 x 75.4 x 7.8 mm for a weight of 177 g, the Xiaomi Mi 8 measure 154.9 x 74.8 x 7.6 mm for a weight 175 g. From this it derives that the manageability is practically the same and that therefore with both you will have some difficulties in one-handed use also calculating that one is present back cover in glass. The latter makes them very slippery when you place your smartphone on slightly inclined surfaces or on the sofa, so you will need to pay close attention.

Returning to maneuverability, obviously the use is not completely compromised since we can send messages even without using both hands, but it should always be noted that we are not talking about very compact smartphones. A point that I feel I can give in favor of OnePlus 6 it concerns i blunted sides of the smartphone which can make it easier to grip.

As regards the design the choice is subjective and varies according to taste, this does not mean that it is not Xiaomi Mi 8 is clearly inspired by iPhone X and, as we said in the review phase, we probably expected something more from this point of view on the part of the company Lei Jun. This is why my choice fell back on OnePlus 6, both because the back cover has more personality compared to his rival, both because we have a front notch and a bottom frame more content. 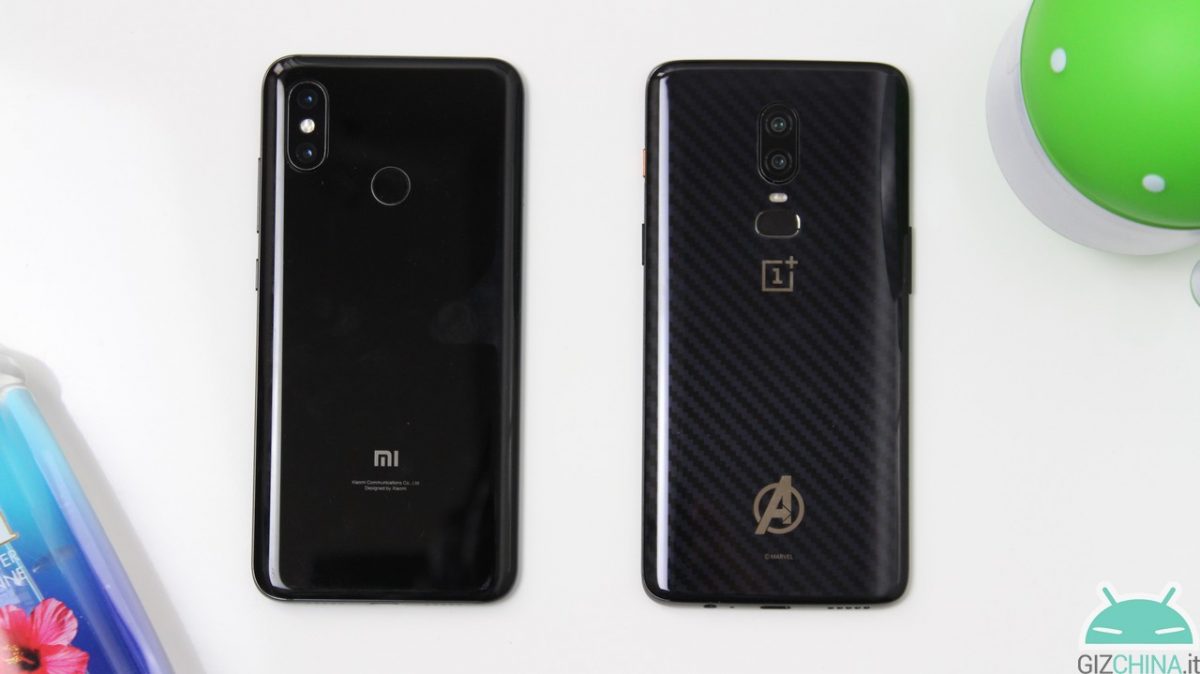 NB: although the comparison was made with OnePlus 6 Avengers Edition, the evaluation of the aesthetic aspect was made on the basis of a normal model.

However, the notch the Xiaomi Mi 8 it is wider because it houses a sensore IR useful for the facial recognition in 2D, which is not present on the device of the company of Carl Pei that relies on the standard face unlock di Android.

The latter, however, in addition to presenting a comfortable Alert Slider that we have learned to appreciate on all the smartphone of the company, also owns themini-jack input, which is unfortunately absent on the My 8. Obviously Xiaomi insert a adapter inside the sales package, but several times in a hurry I happened to forget it at home and not be able to remedy in any way. From this point of view I think that the convenience of having a smartphone with a mini-jack input is undeniable.