In the splendid setting of BerlinDuring IFA 2018, Honor presented and launched Honor Play for the European market, a smartphone with a price belonging to the mid-range, but with a top-of-the-range data sheet. Since the latter has very similar characteristics to theHonor 10 and a lower list price, which of the two will be worth buying? Will it be more valid than the last top of the Chinese company launched several months ago?

Let's not lose ourselves in further talk and let's find out together in our full review!

Inside the sales package made of white hardback we find a rather rich package for its price range: 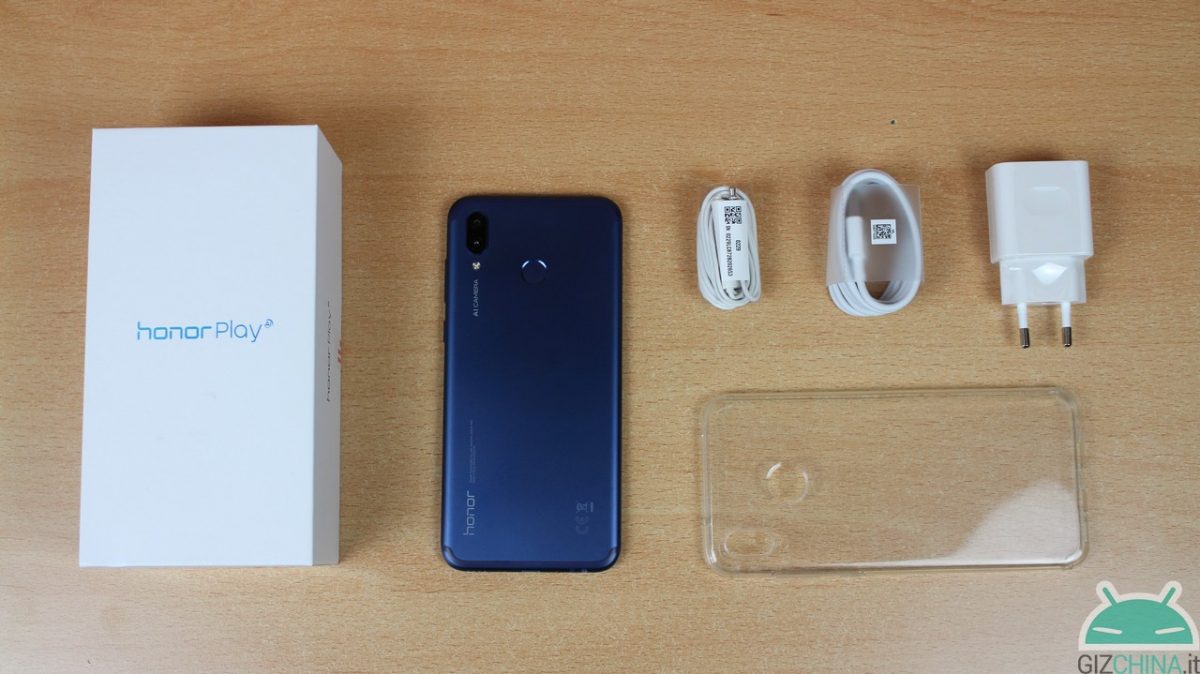 Here we see the first difference with theHonor 10 because, apart from the notch on the front, the two differ both in look and size. THE'Honor Play presents a back cover much more similar to that of a Huawei P20 thanks to the dual camera in vertical with LED flash, in addition to the fingerprint reader and always written vertically. 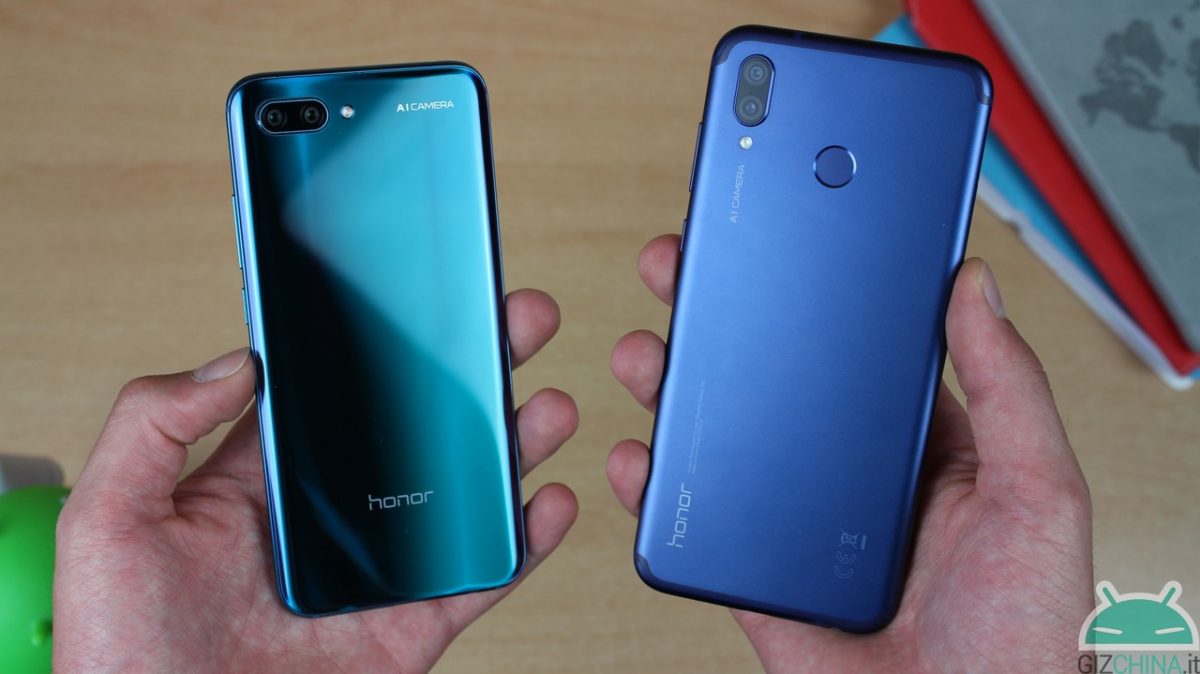 Despite everything I have to say this design I really like it, thanks to the body in it satin aluminum and the plastic bands for the antennas that outline the ends of the device. Regarding the first aspect, the processing of materials is very good and during these days of use I have not found damage due to wear. 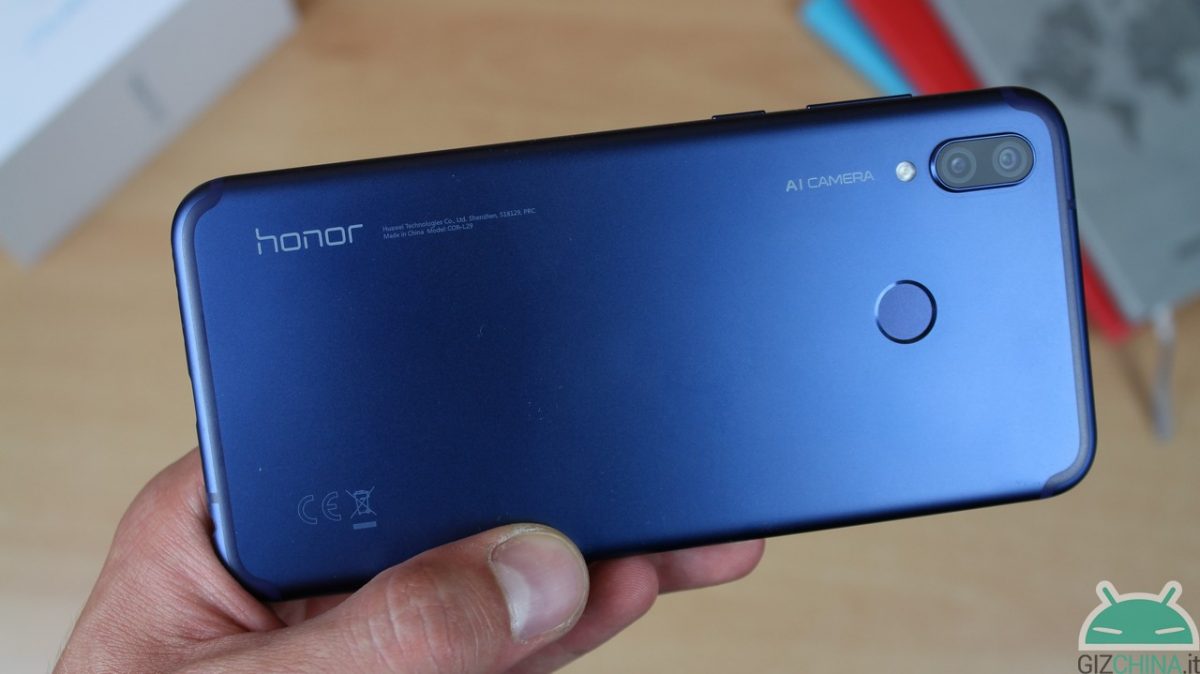 With respect toHonor 10, this is less compact, it is a bit 'more effort to use it in one hand, but nothing too extreme, because the dimensions are of 157.9 x 74.27 x 7.48 millimeters thick for a weight of 176 grams. Fortunately in the sales package we also find one silicone cover what's going to improve the grip. 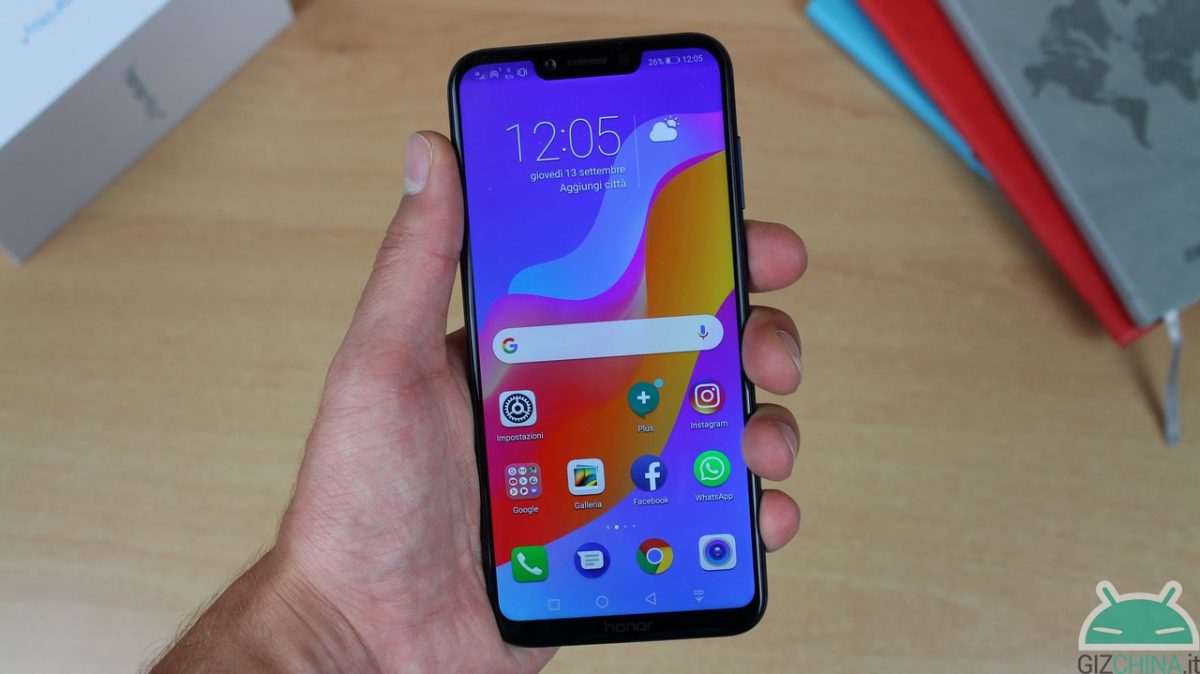 Below we find the mini jack input, USB Type-C and the main microphone with the system speaker, while on the opposite side there is only the microphone useful for the suppression of environmental noise.

Right side classic configuration, that is the volume rocker and power button, unlike the other side where we find the dual SIM / SIM + microSD slot. Here another one is highlighted difference con l 'Honor 10, which does not have the possibility of expanding the internal memory.

Finally, the camera for the selfie, the ear capsule, the brightness and proximity sensor and the notification LED are located on the front inside the notch. In this case the fingerprint sensor passes on the back, which turns out to be faster and more precise than that of its rival in the family.

In fact, both smartphones have the facial recognition and fingerprint sensor, but theHonor Play manages to have better results on both fronts, since the front release button under the display of theHonor 10 it often fails recognition or, in any case, it is not instantaneous. 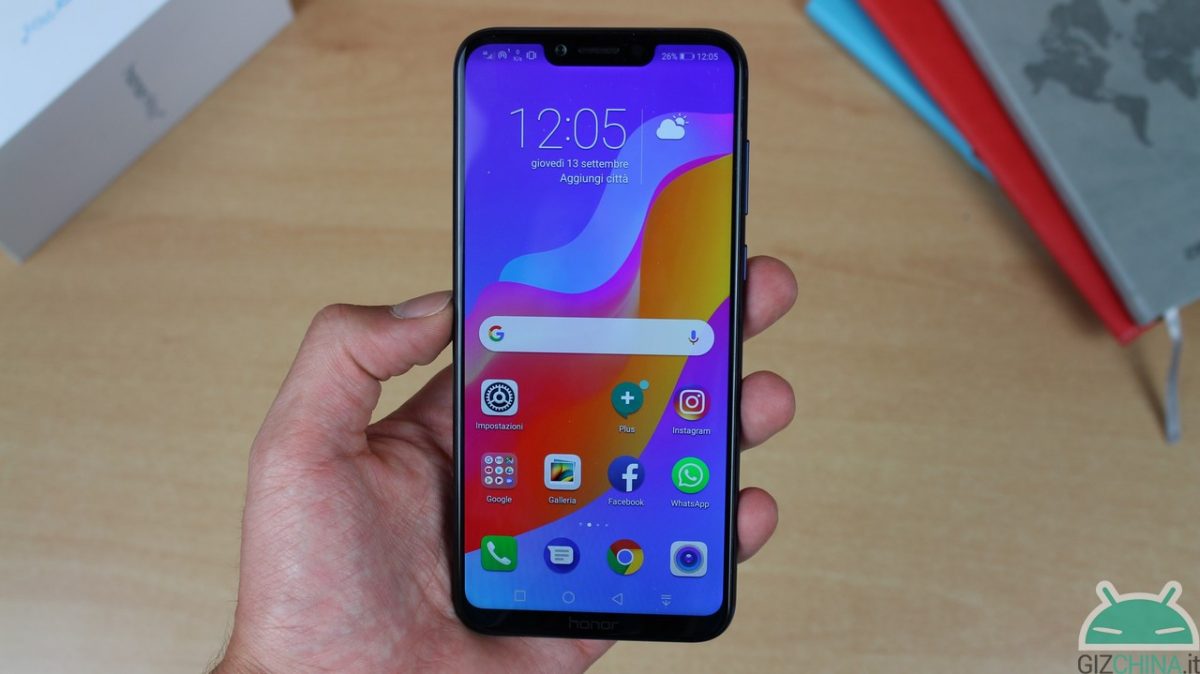 Il It is one of the strong points of the smartphone because, even if it is a simple one IPS, the colors are vivid e well represented. In short, thanks to the generous size of the panel we can enjoy the best movies, videos and games of all kinds.

The minimum and maximum brightness are level, as well as the viewing angles that do not alter the colors. In the settings, however, there is the usual function that we find in the EMUI that will allow us to calibrate the colors at will, as well as the function that will allow us to remove the notch, the one to set the "Smart resolution" (automatically reduces the screen resolution to increase the autonomy), for the "Smart rotation" (the screen will rotate following the movements of the face) or for the eye protection.

One point on which we discussed a lot was that of performance thanks to the presence of a new update able to increase performance of the smartphone in the Gaming e reduce consumption. We speak precisely of the GPU Turbo, which will be integrated by updating also in other smartphones of the Chinese house (some have already received).

Nothing new however under the shell because, speaking of a top of the range, we always find the chipset produced in-house Kirin HiSilicon 970 including a processor octa-core with a maximum clock frequency of 2.36 GHz, NPU (Neural Processing Unit) integrated, GPU ARM Mali-G72 MP12, 4 GB di RAM LPDDR4X e 64 GB di internal memory expandable via microSD.

From this point of view we do not have much to say, as the performance I'm from high level and we found no slowdowns in daily use. Everything runs without any problem and even the games are executed to the maximum of details thanks to the very good GPU.

Speaking instead of Turbo GPU, personally I have not seen great differences compared to the various competitors as, among the various top of the range, in the field Gaming it's hard for a smartphone to actually do it difference.

Perhaps the most obvious difference between Honor Play e Honor 10 it can be seen precisely in this field. In fact, on board the new device we find one dual chamber back from 16 + 2 mega-pixel with intelligence artificial and opening f / 2.2.

In fact, despite the results they are better than many competitors in the same price range, the shots do not reach the quality of theHonor 10.

In good light conditions the photos are quite detailed, but have some colors slightly extinguished. In this case, however, do not despair because artificial intelligence will help you by increasing the contrast, amplifying the colors and, in some situations, cropping shooting and blurring the background.

In reality it seems that theAI is managed differently compared to the old top of the range of Honor, because usually on the latter we do not have the combo crop + bokeh (which can not even be too precise on the Play).

In the night time the situation gets worse, as is normal, but the night modeand will be able to give us some nice satisfactions, although we should arm ourselves with tripod.

Frontally we have a sensor from 16 mega-pixels with opening f / 2.0. During the daytime the smartphone behaves very well thanks to a good definition, sufficient colors and a fair white balance. In the evening the sensor is more difficult and even the management of the lights goes a little bit in crisis.

We can do the same for the i video which can be registered up to the maximum resolution of 4K and that reach sufficiency without surprising.

In short, although I may have seemed very critical is because I compared the results with those of 'Honor 10. In principle, however, it shoots much better than many smartphones located in the same price range.

The audio output from the single lower speaker is average, powerful enough, but with frequencies that tend to favor i average and alti. Fortunately, the situation is improved with listening to headphones.

Very good audio output from the capsule and the one captured by the main microphone.

From this point of view I did not find almost any problem, as the smartphone presents the support for connectivity LTE Cat.18 and reception is always excellent.

As for me, one important lack compared to his rival is that relating to infrared sensor which I tend to use often with the televisions I have at home.

We also conclude with the fingerprint sensor, which is very precise and quickly unlock the smartphone successfully about 10 times on 10. Excellent too facial unblock which immediately recognizes the face during the day, while it has some more difficulties at night.

Nice news from Honor who decided to install the EMUI 8.2 (instead of the classic 8.1) based on Android 8.1 Oreo with security patches updated to July 1 2018.

The system is the classic of Huawei e Honor that we have learned to appreciate over time thanks to the many customizations available as those related to the display and its features listed previously.

So results quite different from those ofHonor 10 that now manages to arrive hardly 4 hours of SoT.

Full charging with the phone switched off takes place in poco less than two hours.

In conclusion theHonor Play turns out to be a smartphone definitely very interesting, launched at a very aggressive price. In this price range it collides directly with another promising device like the POCOPHONE F1 and with theHonor 10 which is practically hers same price.

Le differences between the two terminals of the same house there are and, albeit the Play win from the point of view ofautonomy and with thememory expandability, L 'Honor 10 it dominates it in terms of camera e compactness.

As for the comparison with the smartphone of Xiaomi, do not worry, we will bring you our comparative as soon as possible to tell you who it is true best buy under i 350 euro. Yeah, because theHonor Play is available in price list only 329 €, for an price definitely aggressive with a technical data sheet from a good top of the range!