When it comes to devices Xiaomi the first thing that comes to mind is the very complete MIUI, which has always given us so much satisfaction thanks to the myriad of customizations e features that is able to offer us. However, since last year the Chinese company has decided to change the cards on the table and has started a project in collaboration with Googlemore precisely we speak of a particular series that mounts exclusively Android One.

In fact, if we saw the debut last year Xiaomi Mi A1, this year we have got to try it Xiaomi Mi A2. For this reason, in today's comparison we will go to test two of the devices with the best quality / price ratio of the company that collide especially for the software, or the Xiaomi Redmi Notes 5 Global and Xiaomi Mi A2.

Who will have the best of these two devices? We just have to find out in our article.

Regarding the new mid-range, Xiaomi it did not have much imagination and in fact these two devices look very much alike. Frontally they are almost identical, while at the back they are both equipped with one dual camera vertically, albeit that of the Xiaomi Mi A2 be more protruding. 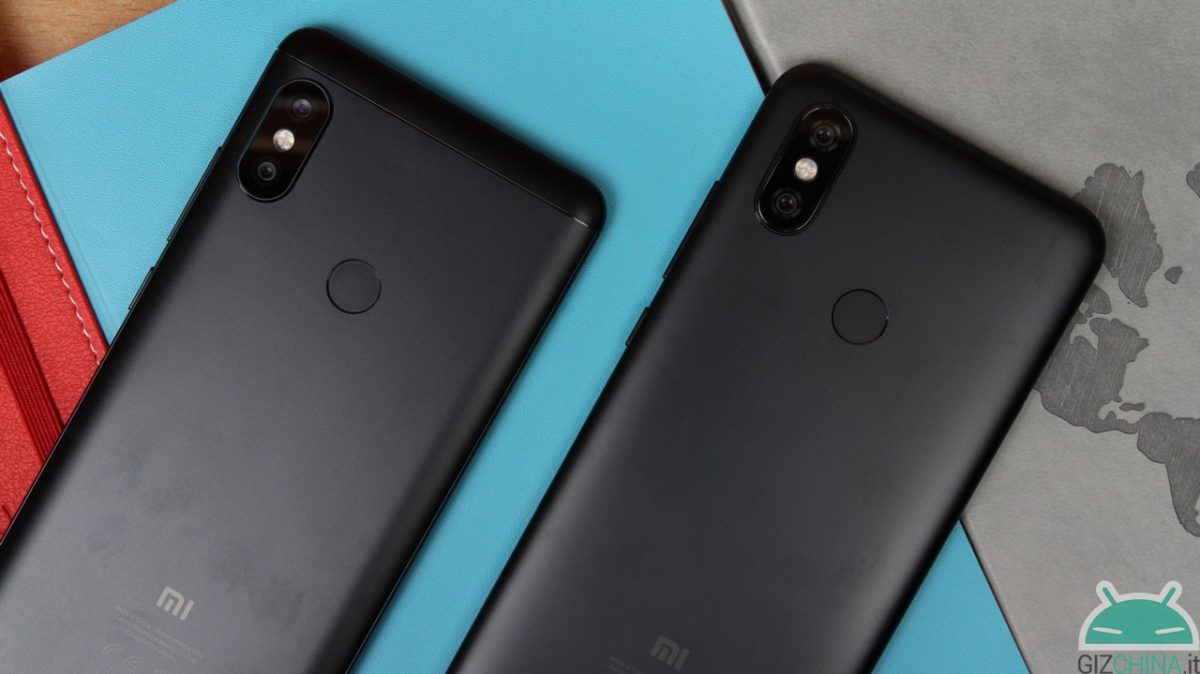 Precisely this aspect is the one that convinced me less than the design of the latter, as if resting on a table will tend to move a lot during writing. The situation improves if we use the cover supplied, but the problem is not completely solved. Despite this, thanks to its more tapered forms, the Xiaomi Mi A2 turns out to be more comfortable to hold, lighter and more pleasing to the eye. This is also thanks to the presence poco intrusive of the plastic bands for the antennas that go to follow the edges of the smartphone in a more harmonious way.

Both are made of aluminum and turn out to be well built and without general crunches. Furthermore, we must point out that while the Xiaomi Note 5 Redmire has an entrance micro USB e mini jack, the Xiaomi Mi A2 presents only the entrance USB Type-C (supplied with the Type-C to mini jack adapter). 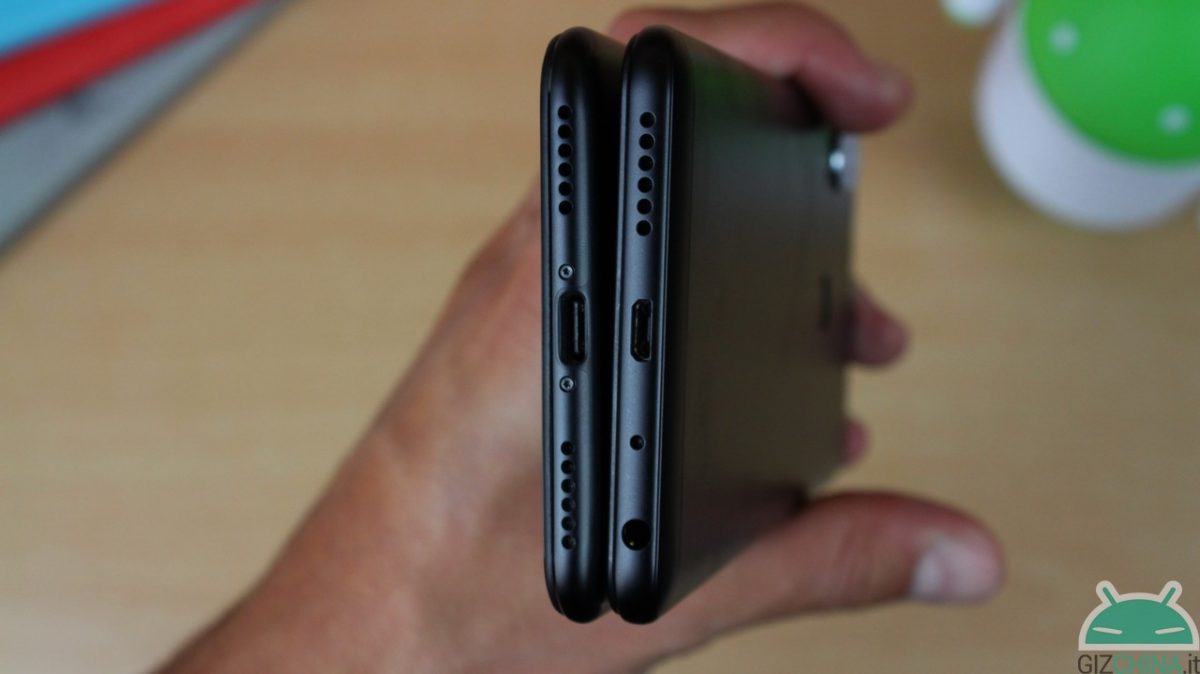 Both devices have a da 5.99 inches diagonal with resolution Full HD + and relationship 18:9. However, the Xiaomi Note 5 Redmire seems to have colors tending to a gradation more cold compared to those of Xiaomi Mi A2. The latter has a more faithful color representation, but by increasing the angle of view we can notice whites tending slightly to the yellow. 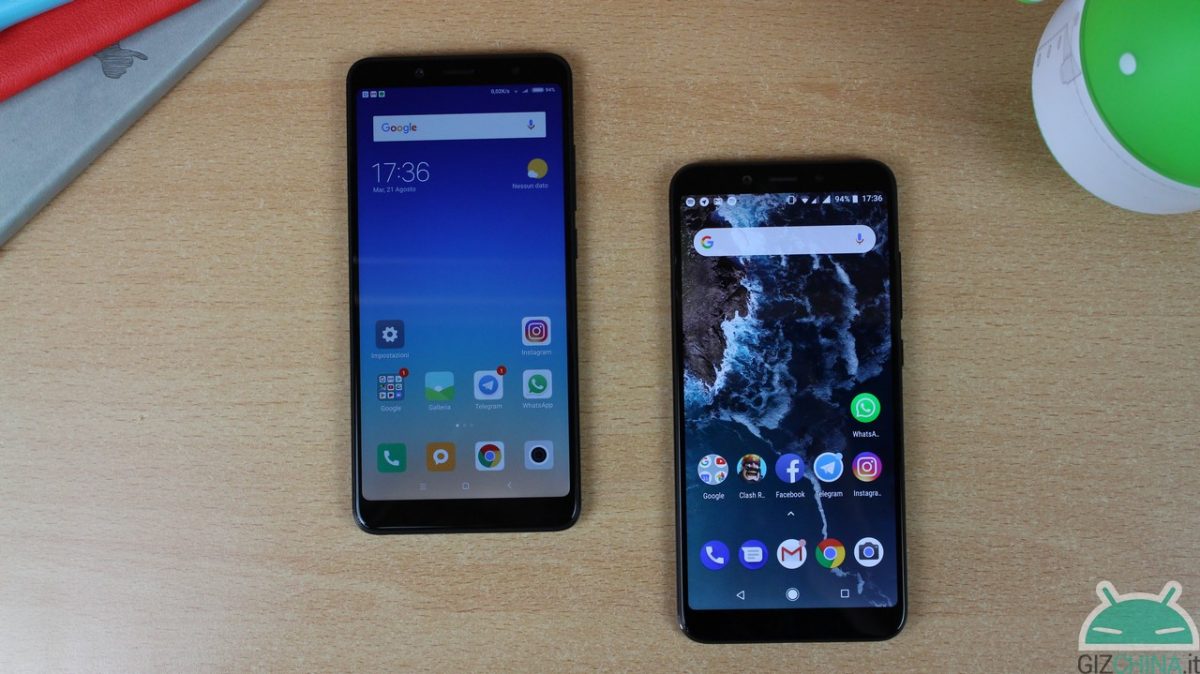 Fortunately, with the MIUI we can calibrate the colors to our liking through the settings, which with the device with Android One we can not do. The positive note, however, is that with the We are A2 we can activate the Ambient Display that will show us notifications on the screen off.

Finally, good for both the automatic brightness sensor, while the oleophobicity of the panel is discreet. 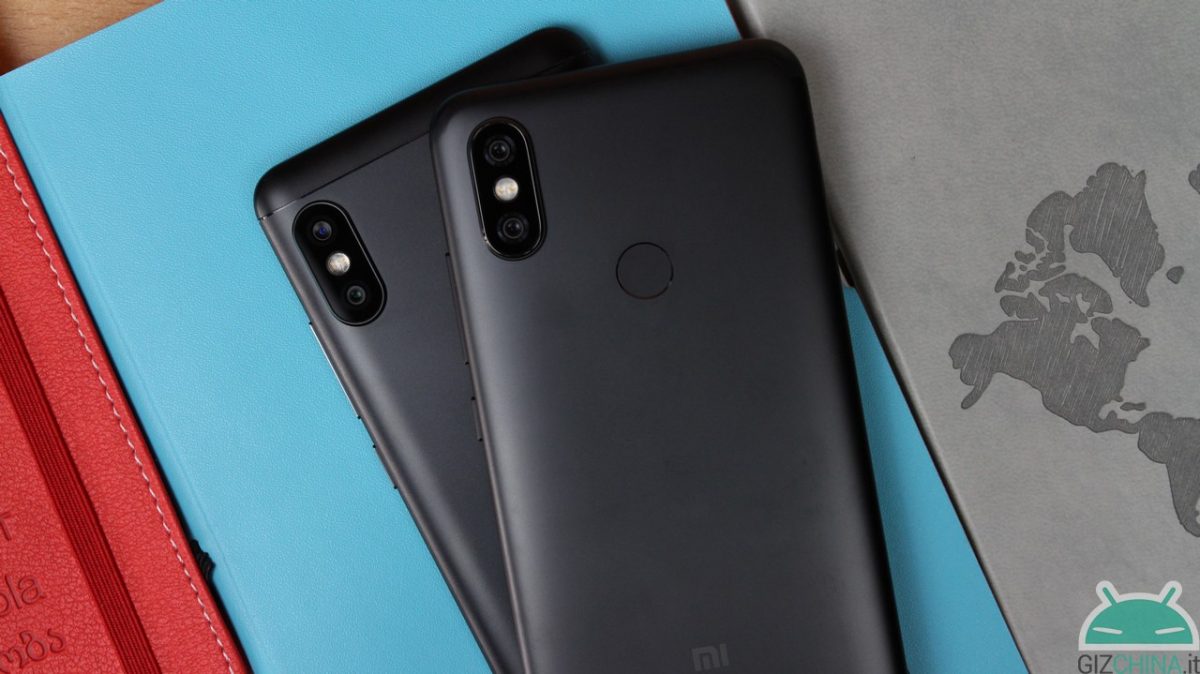 In daily use this difference does not feel much, as both devices are enough veloci e reactive for their price range, but in the opening of applications it Xiaomi Mi A2 it is in slight advantage, as it is in the various benchmarks. No problem, however, with the GPU with the reproduction of heavy titles like Asphalt 9 o PUBG.

In short, you will have understood, the gap between the two is not so wide, but if you want to be sure to buy the most powerful of the two then you will have to tack on the product with Android One, although in that case you will have to go down to one compromise rather important, that is the impossibility of expanding the internal memory through microSD. 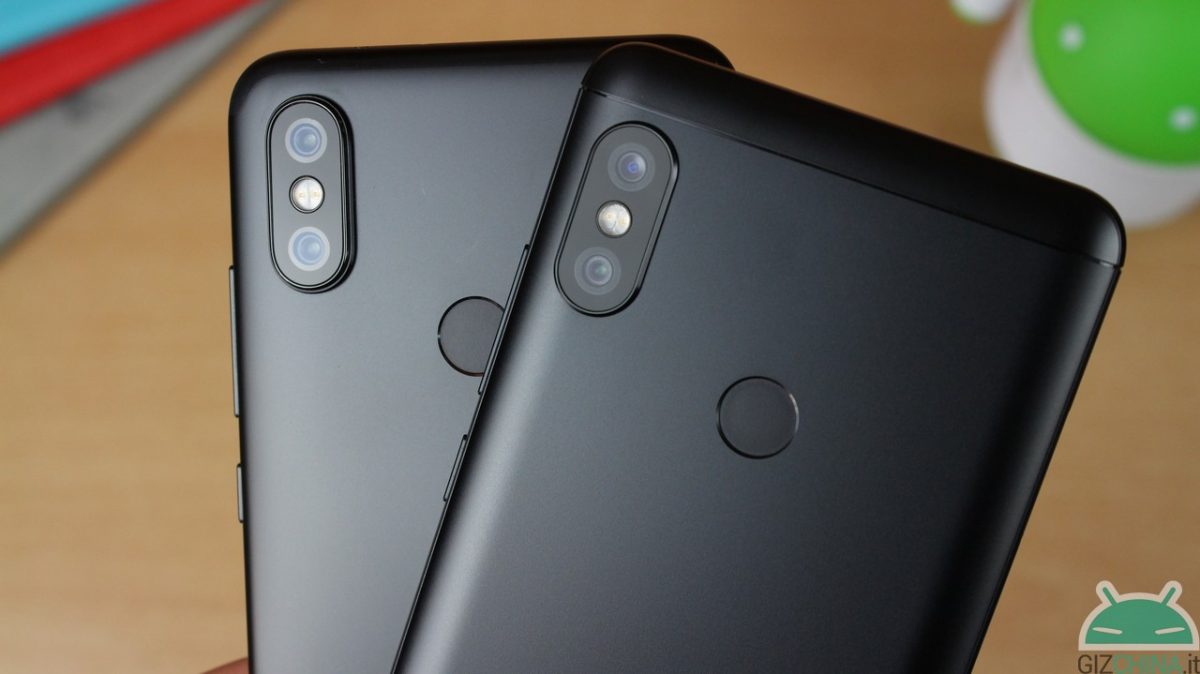 La difference between the two you can easily notice not so much in the details, in which we are almost at par (indeed the Redmi Note 5 it is slightly better, but has more digital noise) than in color rendering and in bokeh, which change the balance between the two. In fact, the Xiaomi We are A2 he has gods colors much more alive and similar to reality and one bokeh natural accentuated which improves the overall quality of the shots.

In fact, I was surprised by the results obtained with this smartphone that has a photographic compartment comparable to slightly higher-end devices.

even the white balance is slightly higher than the device with the MIUI, although both are not perfect. Finally, good for both, the automatic management of theHDR.

In the evening the quality worsens both in one and in the other but, despite everything, the We are A2 it still leads ahead thanks to gods better colors and a brighter sensor.

Frontally we find on all and 2 devices a camera from 20 mega-pixels which however appears to be more performing on the Xiaomi Mi A2, which does not return thatbeauty effect automatic present on the MIUI. For the rest we repeat the previous speech in terms of color fidelity.

Regarding the videos, the We are A2 it can record up to the maximum resolution of 4K, unlike his rival that only comes to the Full HD. Both, however, have the digital stabilization which intervenes only to 1920 1080 pixels x. The latter is good on both devices, even if on the Redmi Note 5 we have del lens flare more evident and the duller colors.

The audio output from the lower speaker of the two devices is very similar to each other, but the smartphone with Android One it seems to have a slightly more sound clean compared to its rival, which however has a volume of poco higher.

An aspect that could make you prefer it Xiaomi Note 5 Redmire rather than the We are A2 it is about the presence of the entrance mini jack which, on the second smartphone, has been replaced by the entrance USB Type-C.

On the other hand, the telephone part and the microphone with which we have not encountered any problems.

Since we're talking about two devices Overseas hubs, both present support 20 band and connectivity Dual SIM 4G Dual Standby. Furthermore, we also find support for the Wi-Fi Dual Band, Bluetooth 5.0, infrared sensor and GPS / A-GPS / GLONASS. Furthermore, unlike the We are A2, the Xiaomi Redmi Note 5 also owns the FM radio. Under the connectivity front both devices behave well. The switch between data network and Wi-Fi is fast enough and reception is also good.

As said at the beginning, the main difference between the two is the software, as it is Xiaomi Mi A2 has a stock software, more precisely Android 8.1 Oreo with security patches updated to August 5th, 2018while its Xiaomi Note 5 Redmire is based on Android 8.1 Oreo with personalized interface MIUI 9.6 Global (Stable 9.6.3) and patches of the July 1 2018.

Obviously, all we could do with the MIUI it is not possible to do it with Android One and more precisely I'm talking about the cloning of the app, creating a second space, setting the display colors, blocking the app with a password, gestures instead of the on-screen keys, double touch to reactivate the screen and so on.

All this makes this interface very complete and full of functionality and without doubt it allows us to perform many more functions without having to install third-party applications. However, a lot also depends on yours needs, as if you want a lot more software intuitive, minimal and with less frillsthen Android One it can certainly be for you, also because in this case we have many advantages related to the ecosystem Google such as lo unlimited storage for photos through Google Photos.

Probably the choice to join the project of Google by Xiaomi is linked precisely to the fact of wanting to reach as many people as possible through a software available to everyone. Not that the MIUI for both "Experts", but it has many features and many menus that could confuse beginners.

In daily use both smartphones are fluids, reactive e free of bugs even if I encountered a problem with the Instagram Stories with the Xiaomi Mi A2, as often the videos shot are jerky. Probably we will only have to wait for an update of the application.

These two smartphones have different units and it shows. In fact, thanks to the battery from 4000 mAh, Redmi Note 5 has a far autonomy top compared to what we can get with the unit from 3010 mAh the Xiaomi Mi A2.

In fact, with the first I managed to get up to 6 hours di active screen, while with the second up to a maximum of 4 hours. For the capacity of his battery is not an insufficient result, but with the Redmi Note 5 you can leave the house at night with less than 30% and be sure to come back with the phone on.

Coming to conclusions, the smartphone that surprised me most was the Xiaomi Mi A2, because for the price at which it is sold, it guarantees above average performance, especially for the camera. In fact, this is available at price list 299 € version 4 / 64 GB, unlike the Xiaomi Note 5 Redmire that list is located at 249 €.

You will have to take into account, however, that by purchasing the smartphone with Android One you will go and give upmemory expandability and all 'mini jack input. So, as in any comparison, the choice falls on your needs, but the superiority in other fields (autonomy and software apart) is undoubted. As for my personal opinion, I think I would buy the new one without too much qualms Xiaomi Mi A2.

If you are looking for the best offers for these two devices, we invite you to join the telegram channel Xiaomi Inside in which to find coupons starting from €139 for the Notes 5 and €183 for the We are A2. 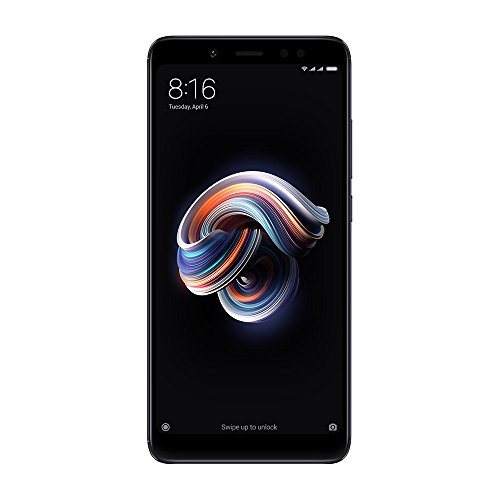 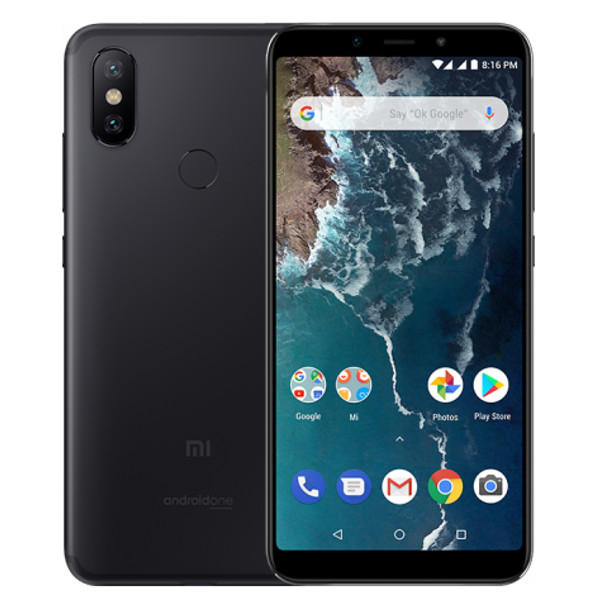 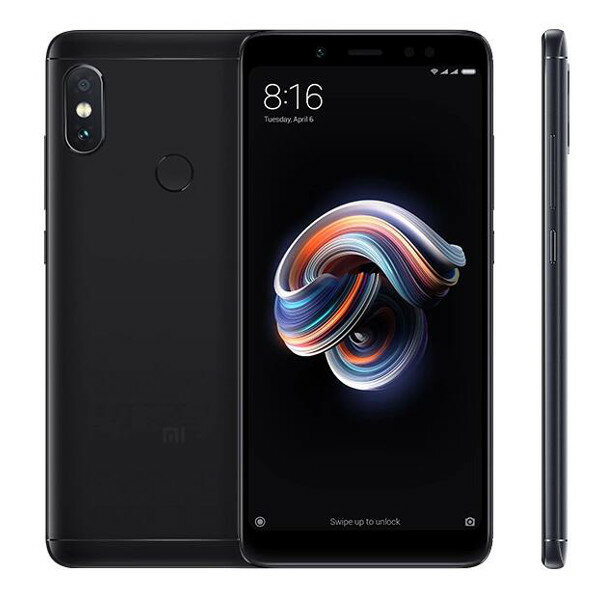