The band medium-low di Xiaomi has always stood out for products with an incredible relationship quality / price, which led to be these devices of the best buy throughout the year. For this reason we have decided to compare three of the Chinese smartphone's smartphone most loved by most users, or the Xiaomi Note 4 Redmire, the Xiaomi Redmi 5 Plus and Xiaomi Note 5 Redmire. To make things a little more interesting, we will include the recent in this comparison Huawei P20 Lite, which is what on paper should stand up to the last Xiaomi just mentioned.

Who will have it checked? Let's find out together in our comparison!

Let's start immediately with the side aestheticin fact, behind the three smartphones Xiaomi they have a lot of body similar among them, if it were not that the Redmi Note 5 owns one camera in vertical. From this point of view, the Chinese company has not innovated very much, making its terminals look very similar to each other even after different generations. 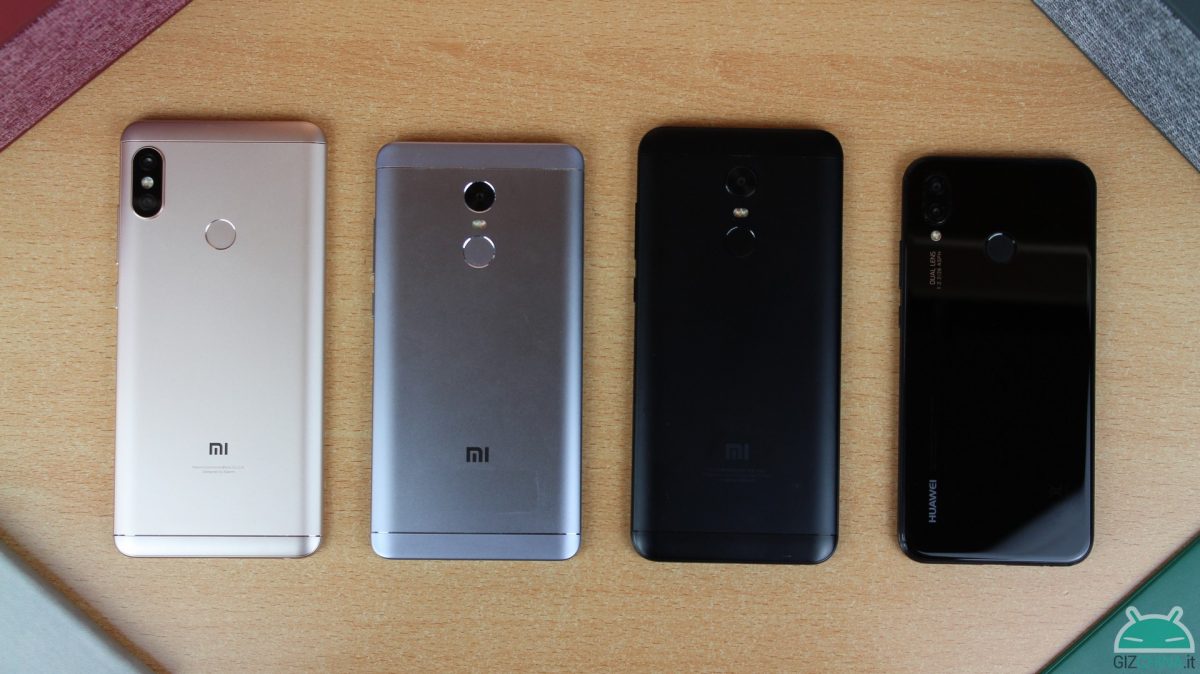 On the front, however, the company of Lei Jun has decided to adapt to the Current "trend" and to implement a panel in format 18:9 on board his Redmi 5 Plus e Redmi Note 5.

For the rest of the keys, the micro-USB input and the microphone are located exactly in the same positions. Only in the last model we find a slightly different configuration thanks to the absence of the bottom grille for the microphone to the advantage of the mini jack input.

La constructive quality è very good for all three devices, albeit the Redmi Note 4 is slightly easier to use with one hand because of its smaller size. Obviously among these the check the Huawei P20 Lite that manages to have a excellent relationship screen-to-body ratio thanks to a very good one space optimization.

Overall Huawei it's what turns out to be more compact, More comodo and with more elegance on a par with the Redmi Note 5. As we have already said in the other comparisons and in the review, it is known that the design of P20 Lite is definitely similar to the new one iPhone Xbut in general I do not mind at all. 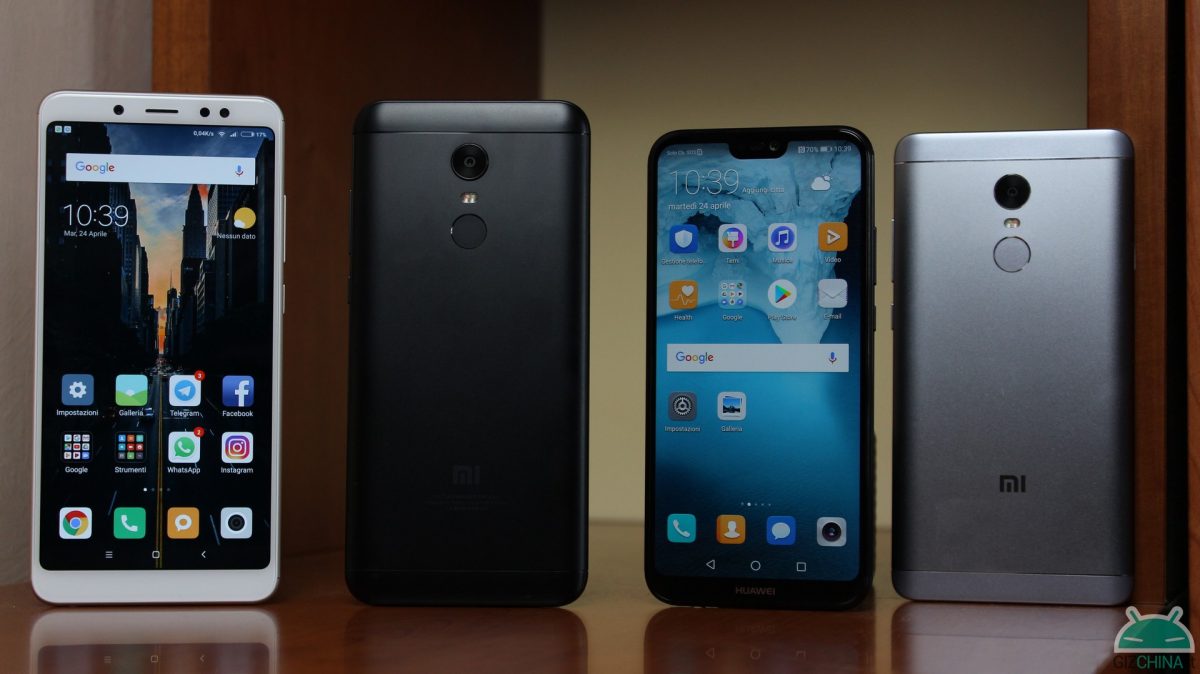 Il aesthetic factor It always depends on the personal tastes, because each of us has different criteria and standards, but if I had to make a ranking among these smartphones I would put to first place il Huawei P20 Lite and to follow Xiaomi Note 5 Redmire, Xiaomi Redmi 5 Plus and finally, for obvious reasons, Xiaomi Note 4 Redmire. 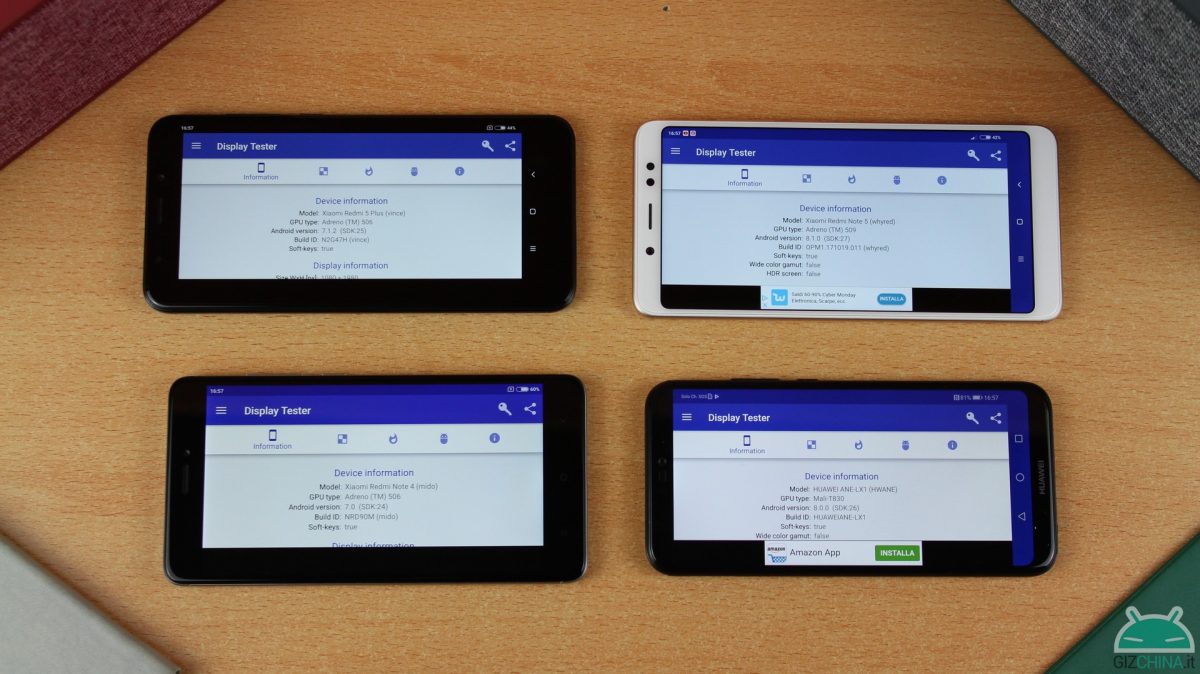 This format is definitely more enjoyable compared to "Old" 16: 9 as it allows us to have a relationship screen-to-body ratio higher and make the most of the smartphone while watching multimedia content, giving us the impression of being more involved in the scene.

The four devices all return slightly different results among themselves in terms of chromatic range. Among these the Huawei it is what behaves meglio, as it returns gods deeper colors, Really e better contrasted. With slight astonishment in the second place I entered the Redmi 5 Plus that, unlike the Redmi Note 5, has some less cold shades and closer to reality. In fact, just with the latest model of the Note series di Xiaomi it is possible to notice a less contrast and therefore colors that tend slightly to white / gray.

Last position for the Redmi Note 4 that does not even disfigure even so much, but that feels the weight of a panel older. There brightness è less strong compared to its rivals and whites tend to gray.

From this point of view we are faced with a device driven by the new Qualcomm Snapdragon 636, Or the Xiaomi Note 5 Redmire, two devices equipped by the now famous and very used Qualcomm Snapdragon 625 and Huawei P20 Lite that comes with an in-house chipset, we're talking aboutKirin HiSilicon 659.

As for general performance, smartphones all behave very well. We do not notice a big difference in the speed of opening applications between devices with Snapdragon and Huawei P20 Lite and no lag or general impacts were found. In this case, however, given the price, the Xiaomi Note 5 Redmire it is the one that comes out the winner since, under stress, it has managed to guarantee us more reliability than the other terminals.

Furthermore, in the sessions of Gaming more intense it Xiaomi Note 5 Redmire manages to maintain a good temperature, unlike the Huawei which tends to slightly warm up at the height of the camera.

technical specifications regarding the hardware compartment you can find them in the tabs placed above, while for the performances we invite you to watch it speed test that we realized a few days ago, in such a way as to have a more complete picture on these smartphones.

While the Xiaomi Note 5 Redmire and Huawei P20 Lite they have one dual rear camera, Redmi 5 Plus and Redmi Note 4 no. This aspect brings the first two terminals to the advantage, as it allows them to take photographs with a best bokeh. 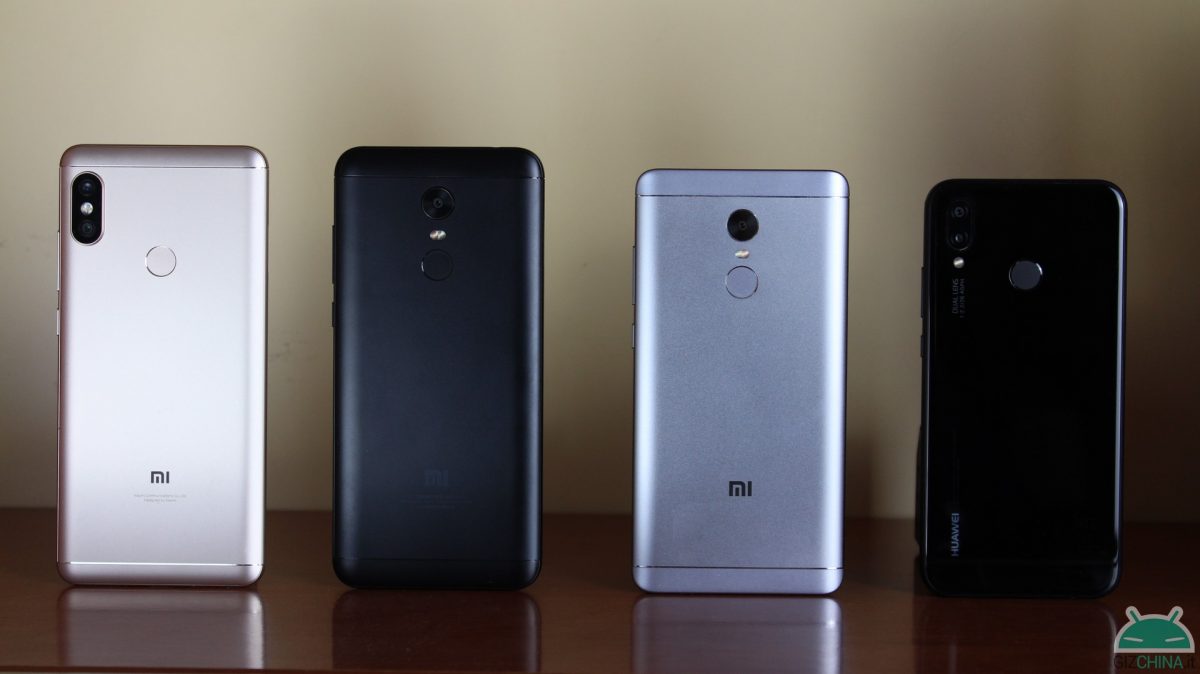 Among the four are only those with the dual chamber to contend with the first place thanks to a better definition and more contrasted colors. The Redmi Note 5 it has brighter sensors that allow us to make a difference in the evening, but despite this it is possible to notice reddish halos around the edges of the photographs.

Returning to talk about shots in daytime, the above mentioned smartphones have a more similar color range between them, while the Redmi 5 Plus and Redmi Note 4 they share different aspects such as a similar lighting management, albeit the sensor of the Redmi 5 Plus be brighter and able to capture more details.

Good theHDR on all devices, but appears to be more incisive always on the on Xiaomi Note 5 Redmire and on Huawei P20 Lite. In this sector the two behave quite well, even if probably the smartphone at home Huawei it is a slight advantage. Third position occupied by Redmi 5 Plus and last from Redmi Note 4.

As for the front camera the winner is always the P20 Lite. In this case the last middle range of Xiaomi presents a wrong light management that often leads to overexposure of the backgrounds. Despite everything, the definition in the shots of the latter is very good, too bad for the classic software Xiaomi which tends to knead slightly and to apply a sort of automatic beauty mode that is going to ruin the final result. This also affects the other smartphones of the Chinese company.

In the evening the noise increases for everyone, the Redmi Note 5 it does not behave so badly, but Huawei still manages to get out of the best shots, brighter and more defined.

In conclusion, for this sector, the ranking sees the lead Huawei P20 Lite, followed by Xiaomi Note 5 Redmire, from Xiaomi Redmi 5 Plus and finally from Xiaomi Note 4 Redmire.

Regarding the speed in focusing the Redmi Note 5 is still in first position, follow the P20 Lite, Redmi 5 Plus and Redmi Note 4.

The aspect that I did not like the Huawei is that the colors are too contrasty and poco real, while the Xiaomi in this case they behave very well, first of all the Redmi Note 5.

As for this sector, the Xiaomi Note 5 Redmire and Redmi 5 Plus they are equivalent and are placed at the first place of the ranking thanks to a audio more full-bodied, More powerful e better equalized compared to the other two smartphones.

Il Huawei P20 Lite fails to convince in this respect and, although it has a representation of the frequencies slightly more faithful than the Redmi Note 4, volume turns out to be anyway more bass.

No problem with any of the four smartphones regarding the microphone el 'audio on call.

Under the connectivity front the devices behave well and I have not found any particular critical issues. A single note should be made for the Redmi Note 5 and Redmi 5 Plus, which can not count on the support of the 20 band as Asian variants. However I did not find any uncertainties in my area during the period of use but, of course, you can avoid any problem by purchasing the respective variant Overseas hubs.

definitely Useful e welcome the presence of the infrared sensor on devices Xiaomi, the absence of the chip is less pleasant NFC which, however, we find on the Huawei P20 Lite.

In order to make this comparison as correct as possible, we decided to install the ROM Global on all devices Xiaomi in Asian variant (Redmi Note 5 e Redmi 5 Plus). Thus, by schematizing, we have the following situation:

Daily use was very pleasant with all smartphones, one accomplice MIUI always a lot Assessment, fluid e reactive that allows us to use the device with complete peace of mind. The same speech is valid for the Huawei P20 Lite and its EMUI.

In this case, perhaps, the choice of the best falls on the customizations that brands want to offer within the software of their products and the needs that each user has. From this point of view, the MIUI it is in advantage thanks to the possibility of carrying out modding without particular problems and a suite of applications that allow us to manage the entire ecosystem Xiaomi with your device.

Under the front of theautonomy the undisputed champions are the devices produced by the company of Lei Jun. Indeed, i Xiaomi they manage to get one medium about 8 hours of active screen with intense use, while the P20 Lite with its 3000 mAh can reach a maximum of at the end of the evening 5 hours.

Here we are then at conclusions, which necessarily lead us to establish a preference among all the devices examined today. Before doing a final analysis, however, I would like to talk about them prices of sale:

In light of all this it is easier to make a more complete picture of the situation. Among Xiaomi I definitely liked the more Redmi Note 5, although I remained a bit disappointed from some small aspects of the front camera. Among all the most balanced turns out to be the Huawei which, despite not having a crazy autonomy compared to the other terminals just examined, manages to bring home the enough in any sector. At the same time it is difficult to overlook theGreat price the Xiaomi Redmi 5 Plus, which can still be inserted inside the best buy of the band low-cost.

In short, as you will have understood, it is certainly not an easy choice. What I can tell you is that, according to my needs, I would put the first place in the Huawei P20 Lite, while among the Xiaomi wins on all the Redmi Note 5, followed by the Redmi 5 Plus and from Redmi Note 4. The best quality price compromise is of the Redmi Note 5.