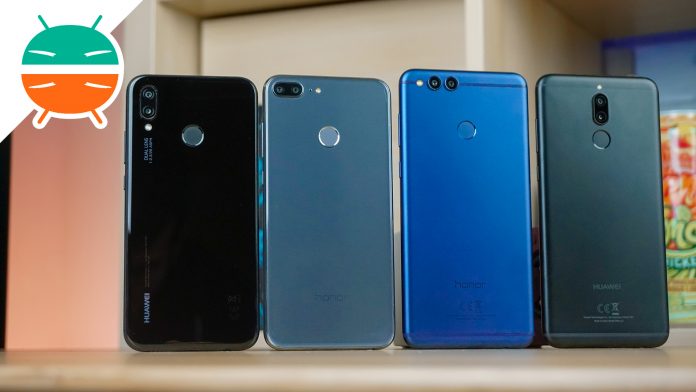 Since the middle band di Honor e Huawei is populated by several smartphones very similar to each other for features, we decided to bring you a comparison to help you choose the device with the miglior rapporto qualità / prezzo that can meet your needs. More specifically we refer to 4 devices: Huawei P20 Lite, Honor 9 Lite, Huawei Mate 10 Lite e Honor 7X.

Who will have the best? Let's find out together in our comparison.

Il design of these four smartphones is perhaps the thing that most differentiates them in absolute, despite theHonor 7X and Huawei Mate 10 Lite they are very similar. As for these two we have a back cover in satin aluminum with the plastic bands and the fingerprint sensor at the same height, while frontally they stand out only for the logo and for the position of the cameras. 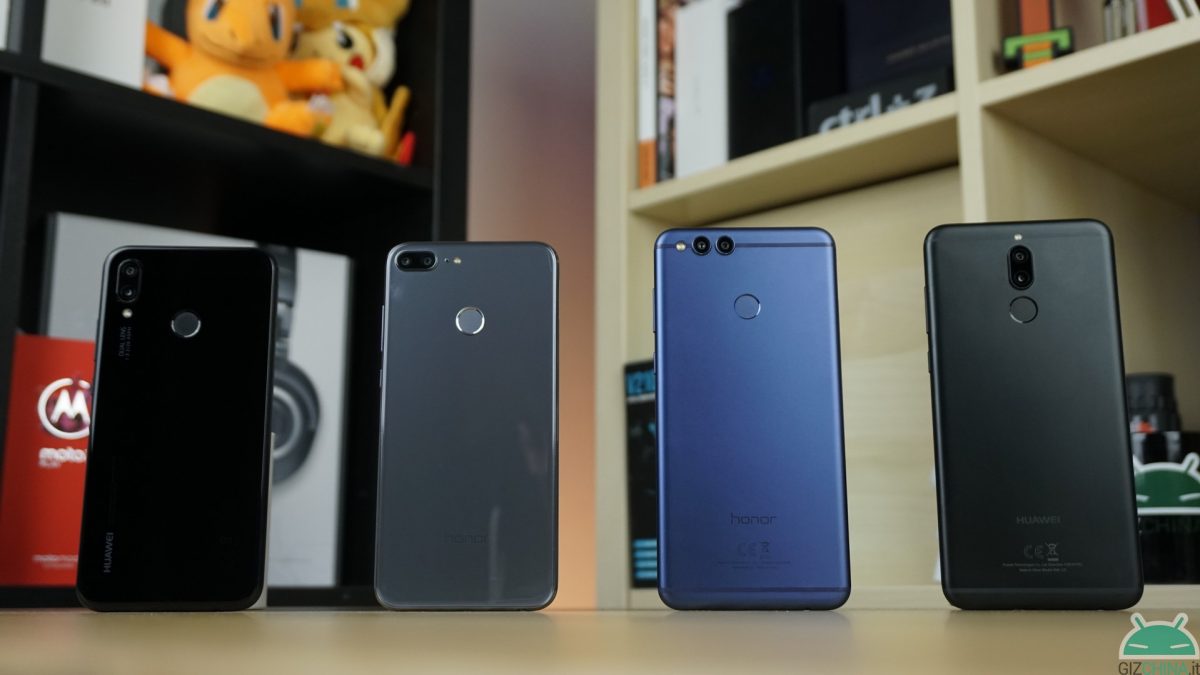 L'Honor 9 Lite and Huawei P20 Lite they have a back cover in glass and dimensions rather similar to each other. Moreover, being more compact than the other two smartphones, they are definitely more manageable and easier to use with one hand.

Which device is aesthetically more beautiful among these is difficult to establish, as this is a choice that certainly falls on personal tastes. Despite the resemblance with iPhone X, what I preferred during these days of use was the Huawei P20 Lite, As well built, compact and with a nice display.

As for the various panels, the one that convinced me the most was definitely that of the P20 Lite thanks to a better chromatic fidelity and to a good contrast. In second place fits theHonor 9 Lite, while they occupy the last place on a par with theHonor 7X and Huawei Mate 10 Lite because of colors a bit ' extinguished and not vivid as they should. 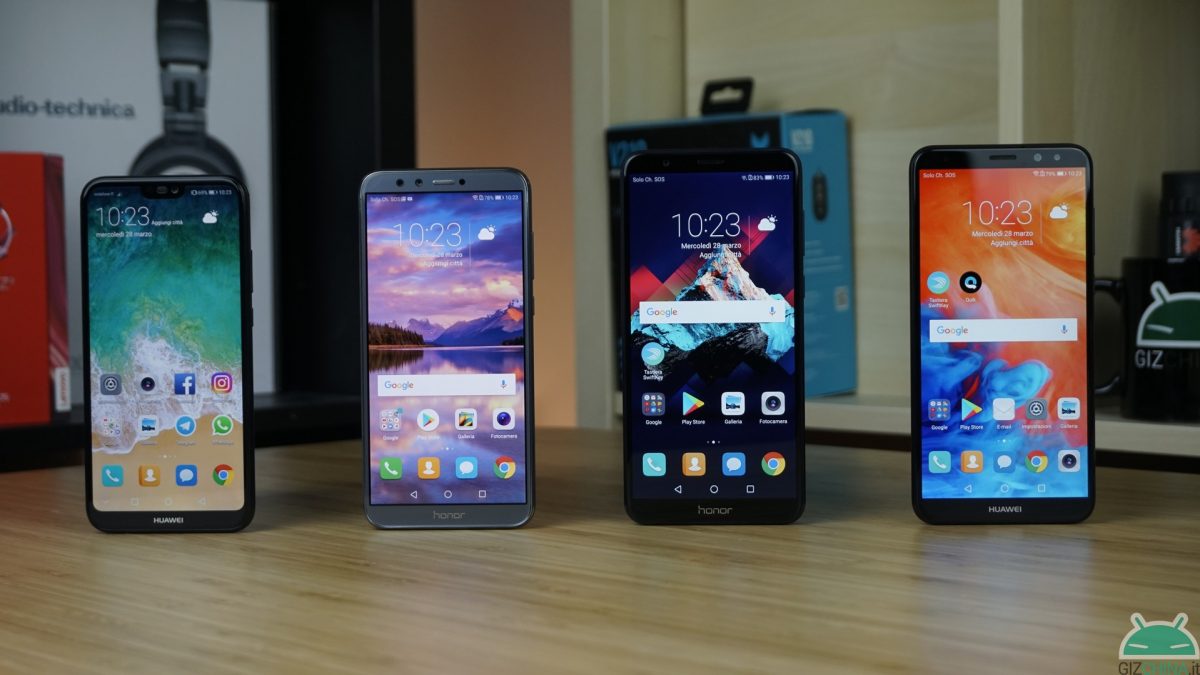 As for the maximum brightness we are on the same level, albeit theHonor 9 Lite turns out to be slightly ahead of his teammates. The touchscreen is good and responsive on all units.

As you have already noticed from the previously mentioned technical data sheets, all of them possess the same chipset mid-range in-house product from HuaweiOr l 'Kirin HiSilicon 659, which is inclusive of a processor octa-core with a maximum clock frequency of 2.36 GHz and a GPU ARM Mali-T830 MP2. The memory cuts, however, are different, as theHonor 9 Lite It owns 3 GB di RAM LPDDR3 e 32 GB di XMMUM eMMC internal memory expandable via microSD, while all the others are equipped by 4 GB di RAM LPDDR3 e 64 GB di internal storage (always expandable).

Despite the almost identical technical specifications, the performances are different. For this reason you will find the speed test we made a few days ago.

All the devices in question have one dual rear camera and only theHonor 9 Lite and Huawei Mate 10 Lite they also have a double front sensor. At first sight the results do not seem to differ much between them, but in reality the P20 Lite there are at least a couple of steps above the others.

The shots made with the latter are characterized by one better color fidelity and a major definition. You can see these details by simply cropping the photos and comparing them with each other. On the management of lights always manages to be the winner, albeit very little, because the 4 smartphones return very similar results between them. What he does worse it's definitely theHonor 9 Lite that sins more in terms of definition and colors, while Honor 7X ed Huawei Mate 10 Lite they return some almost identical shots.

In the evening, the quality drops, the digital noise increases for everyone and the management of the lights becomes more difficult, especially for the cheapest in question. Obviously, it's always the new one who comes into the house Huawei.

As for the front camera the winner is again the P20 Lite thanks to a better lighting management and a superior quality compared to the other. Despite its price range theHonor 9 Lite he defends himself well, but still comes last due to colors a bit 'dull and a definition not at the levels of his cousins. The Mate 10 Lite gives us back one bokeh top thanks to the dual camera, but theHonor 7X take more photos clear, albeit with gods colors more tending to yellow.

We start from the premise that none of these is a sample in the audio industry, the differences are really minimal and good or bad are all equal. Slightly ahead of the Huawei P20 Lite in terms of audio quality, but in terms of power, Mate 10 Lite e Honor 7X they are superior. Finally, Honor 9 Lite returns a sound a bit 'too flat compared to its competitors and this makes him gain the last place in the standings.

Under the connectivity front, the devices are equivalent in terms of telephone reception e satellite navigation. However, the Huawei P20 Lite he is the only one to have the Wi-Fi Dual Band, because everyone else owns the Single-band Wi-Fi. Unfortunately this is a significant lack that could make many of you desist from buying these terminals. For the rest both theHonor 9 Lite and the P20 Lite they have a plus not from poco, Or the chip NFC.

On the software there is not much to say because theEMUI we already know it very well. The only notes we can make regarding the versions of the software on board the devices, as on the Huawei Mate 10 Lite and on the 'Honor 7X it is still present Android 7.0 Nougat with EMUI 5.1, while the last major release of the house Google, or Android 8.0 Oreo with EMUI 8.0, we can only find it on board the other two remaining smartphones.

In this sector Honor 7X e Huawei Mate 10 Lite they are the master thanks to a battery from 3340 mAh that manages to guarantee them an autonomy of about 5.30/5.45 ore di active screen.

Despite everything, too Honor 9 Lite e Huawei P20 Lite they behave well with their unit from 3000 mAh which allows the first to reach the 4 hours di SoT and the second to even get around the 5 hours. A result, therefore, comparable to the other two terminals mentioned above.

In conclusion this was a battle pretty fought because, albeit the P20 Lite seemed superior on several aspects, the Mate 10 Lite el 'Honor 7X they are able to guarantee slightly better performance.

Also that of the photo gallery It was a nice one comparison, but it must also be said that there is a beauty price difference between these three devices and the new one entered the house Huawei.

In conclusion, the latter is definitely the one I preferred in the comparison, but still there are no differences so heavy as to convince me to buy with my eyes closed this new entry at full price. As soon as the smartphone reaches the threshold of the 300 euro, then we can consider it without a doubt an excellent purchase.