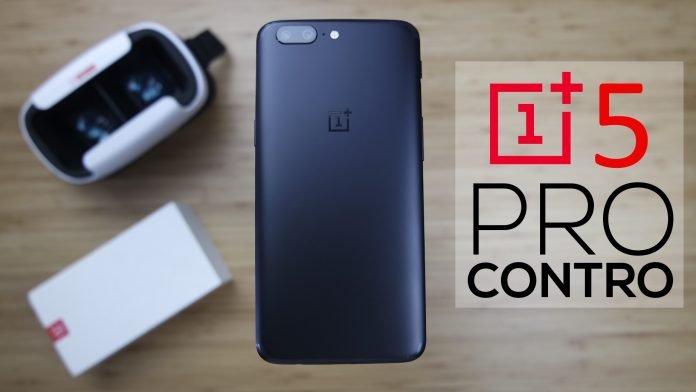 If we were to compile a list of the most controversial smartphones of the last few years, we would certainly also find it OnePlus 5. Following the official announcement, the fanbase was essentially divided into welcoming the new one flagship killer. But does it still make sense to call it a flagship killer in the 2017? Let's find out in ours review complete.

Review OnePlus 5: it will not be a killer flagship, but ...

The first thing that divides of OnePlus it's the design. However, we can state that the resemblance with 7 iPhone Plus o OPPO R11 it's more in renders than from vivo. Sure, the design isn't particularly original but it's just as true that the phone is curate in construction. There metal shell it is well blunt along all the profiles, returning one pleasant feeling to the touch. As expected, however, this undermines the use with one hand due to the discrete slipperiness. The bands of the antennas are well camouflaged, especially in this color Midnight Black. Chicca always appreciated is theAlert Slider, with which you can quickly switch the audio profiles. A feature inexplicably overlooked by any other Android smartphone maker. The only flaw is the step created by camera module, not excessive but still present.

As for its predecessors, OnePlus 5 integrates an ID sensor again among the fastest in the industry. The precision it's almost perfect in the probability of unlocking, without considering that the protection in ceramic guarantees a greater guarantee against wear and tear. From the point of view softwaremoreover, we can associate some gestures, like blocking the display by holding it down or activating with a double click app like Google Now, camera and more. It could certainly be done better for the backlight of the keys side, too dim. 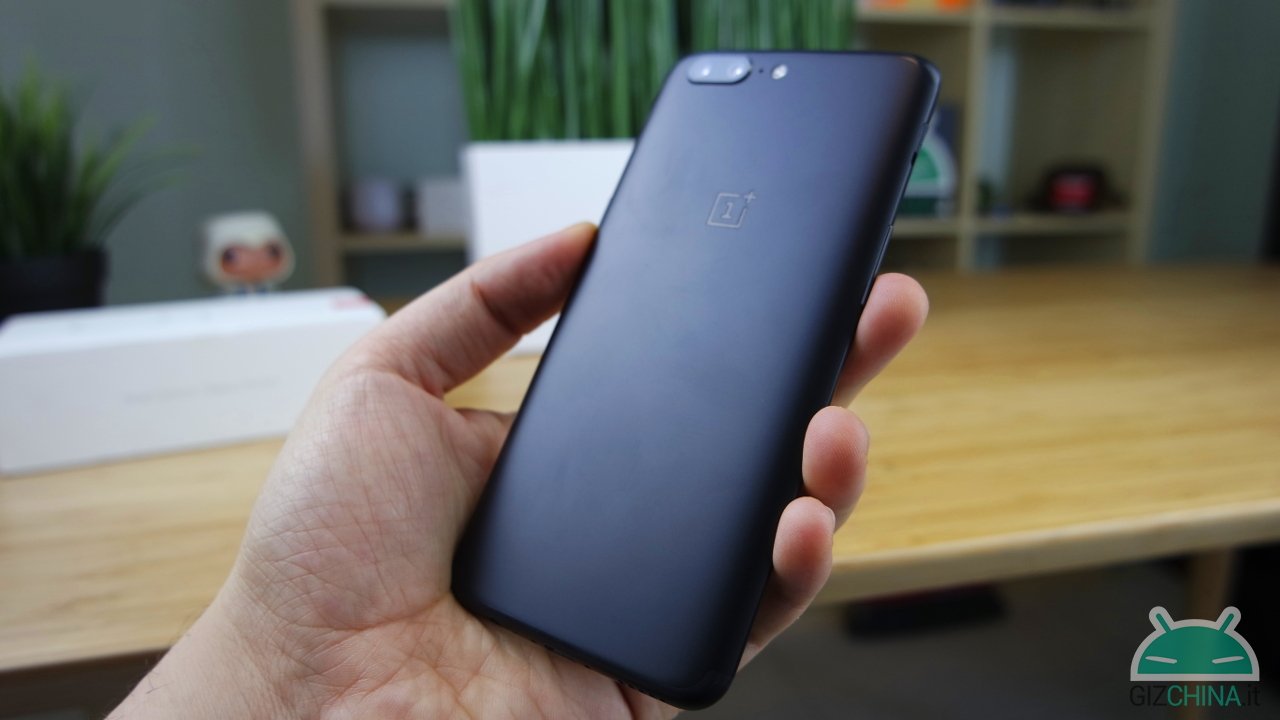 Almost similar to 3 and 3T, the screen of OnePlus 5 is again from 5.5 inches diagonal with resolution Full HD. Nothing more, nothing less. This does not mean that it is a screen dated, indeed. Merit above all of technology Optic AMOLED, richness of colors it is extreme as well as the contrast and depth of blacks. All this gives a multimedia fruition (and not only) high level. You can also choose color profiles, including sRGB e DCI-P3.

Not bad too Reading Mode which "transforms" the display into a similar e-ink, which can also be set automatically for certain apps. Good brightness sensor, even if slightly downward. And if you want to fully enjoy the AMOLED panel, set the Dark Theme. The function of Ambient Display, even if I would have liked more that it was perpetually active and not only to receive notifications or when the phone is lifted. 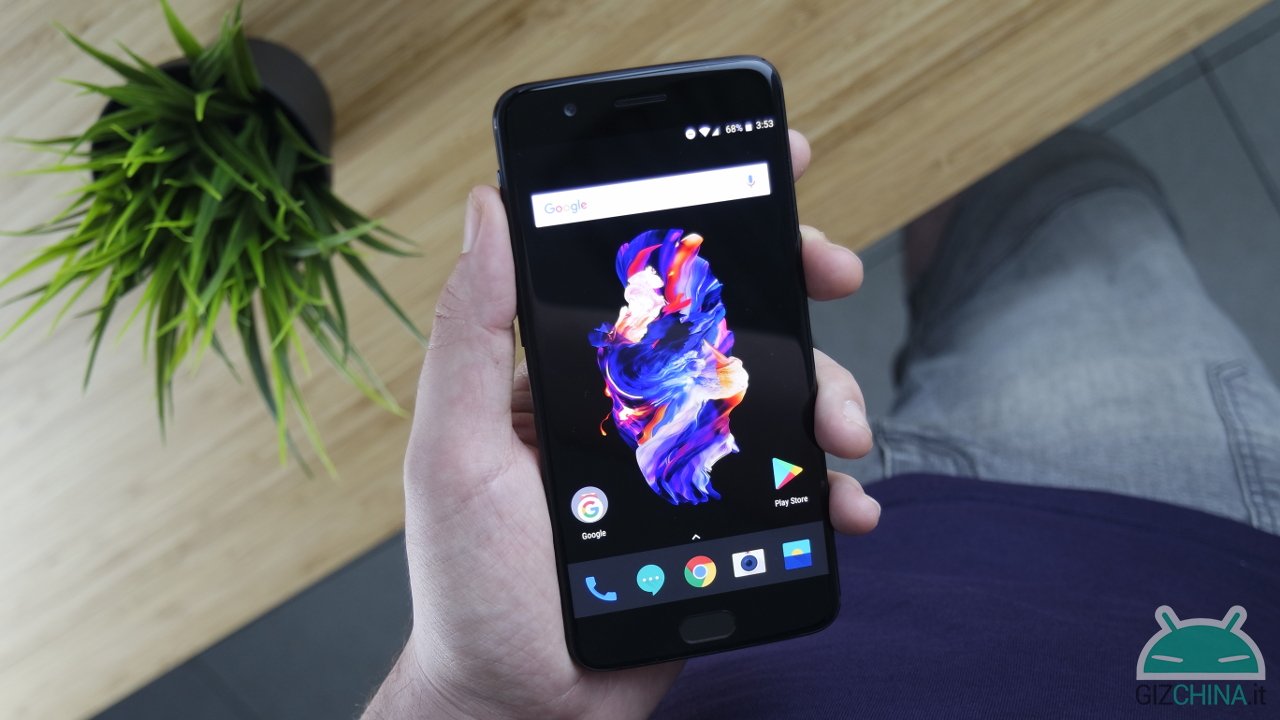 As per tradition, OnePlus means brute power and OnePlus 5 is no exception. It is undeniable that the software component plays a fundamental role (more on that shortly), and it does Snapdragon 835 combined with the Adreno 540 GPU, well 8 GB of RAM LPDDR4X e 128 GB of memory UFS 2.1 guarantees a decided push more. No doubt about it, use this smartphone is a real pleasure both for the hardcore fan and for the average user who is unlikely to find himself with a congested phone after only a few months. Although the 8 GB may seem exaggerated in some ways, I have never seen any reloading on days of use and, from this point of view, it is a product designed to last over time.

The only thing that still does not swallow by OnePlus is the will of eliminate the slot microSD. A choice to preserve the stability of the terminal, of course, but which for users like me, who prefer to keep large files such as audio tracks, perhaps even uncompressed, films and so on, proves to be penalizing.

The first thing I appreciated was the interface of theCamera appAlways reactive, Assessment but still intuitive. Worthy of mention Pro mode, full of parameters to modify (there is also the histogram and the RAW shots). Given the double configuration there are two new functions. The first is the simulation of one 2x optical zoom, able to guarantee close-up images but without any particular degradation (if with good light). The second is the Portrait mode, which returns good results, even if you need a little 'eye. 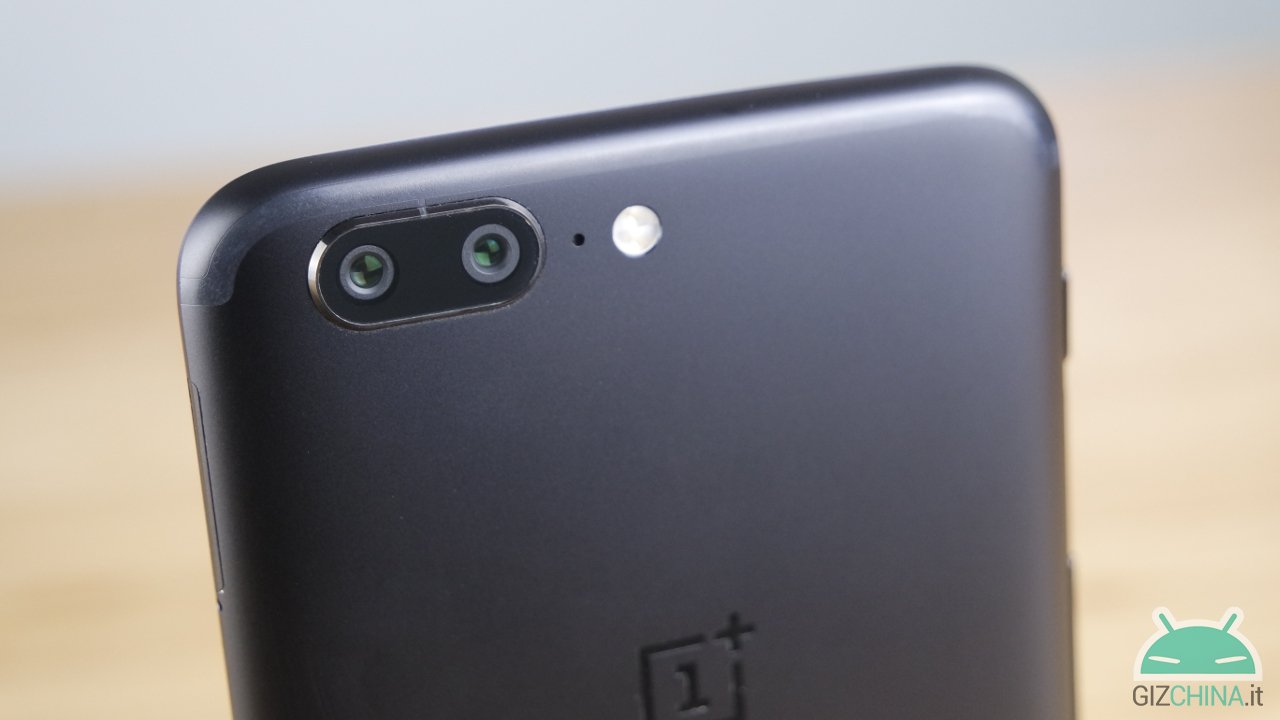 Speaking of photographic quality in general, OnePlus 5 guarantees more than decent results both day and night. The chromatic range è well managed, without too many imbalances. Good also the definition, thanks to the mega-pixel 16 and a sharpening in the norm. What you notice compared to the previous OnePlus is a greater contrast, a subjective aspect that I personally liked. But it is useless to go around: theassenza dell 'OIS it's a malus with which to live. With little light it will not be very difficult to get micro-moves and even the videos are affected, even if not too exaggerated.

Unfortunately, although some rumors suggested it, on board OnePlus 5 we do not find no double speaker. Fortunately, the lower mono speaker returns a good audio stream in terms of volume, while the management of the frequencies did not impress me much. More warm, however, the audio through the headset capsule, as well as that throughmini-jack input, fortunately preserved by OnePlus, assisted by a equalizer customizable. Absent FM radio. 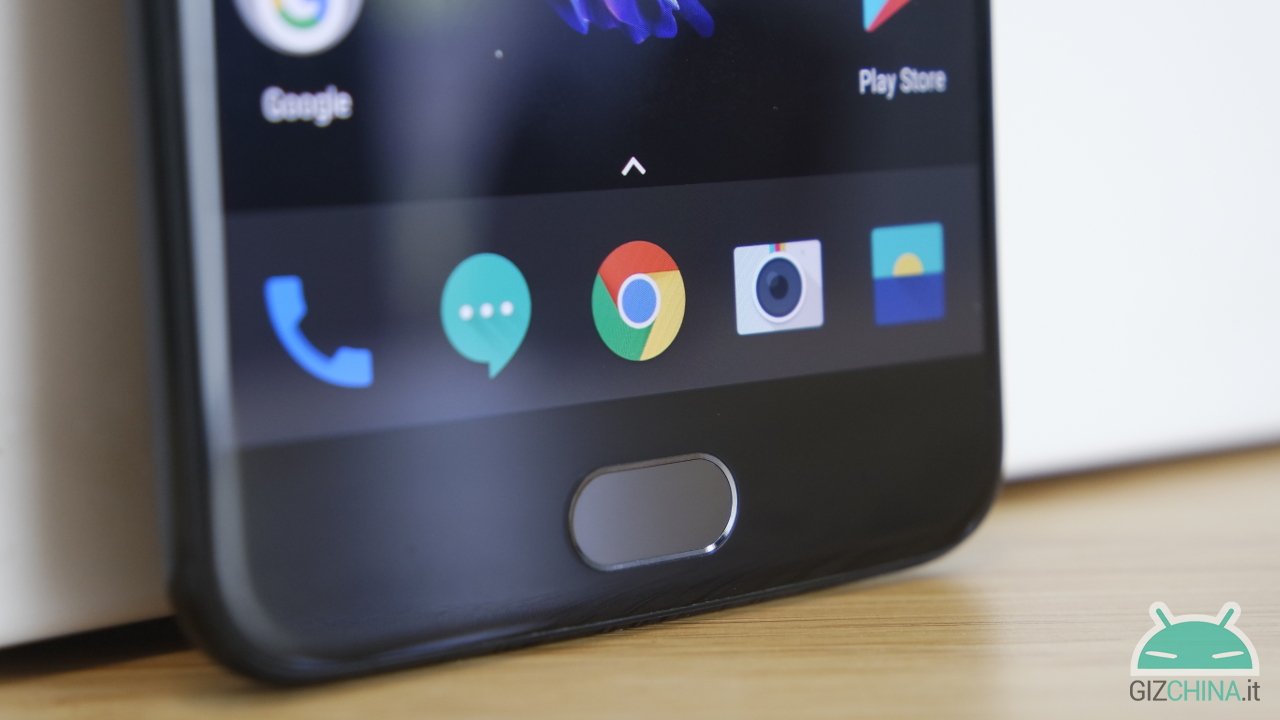 While not offering microSD expansion, OnePlus 5 it offers support Dual SIM. Although this one we have tried is the Asian version, there is the 20 band. In fact I have not encountered any problem of reception, with an always impeccable signal coupling. Same for connectivity Wi-Fi ac Dual Band, free of burrs. We have theNFC and also the Bluetooth 5.0, but no function for the Dual Audio. Also satellite-based navigation via GPS / A-GPS / GLONASS / BeiDou.

The software on which it is based OnePlus 5 è Android 7.1.1 Nougat and the update to Android O will also arrive in the coming months. The enrichment of the already useful functions of Google will take care of the OxygenOS 4.5 which, to date, has reached the release 4.5.5 through various OTA updates. In addition to the functions already listed, the main advantage of this interface is primarily the fluidity and cleaning, a real panacea for those who like the Android Stock experience but with the right additions. 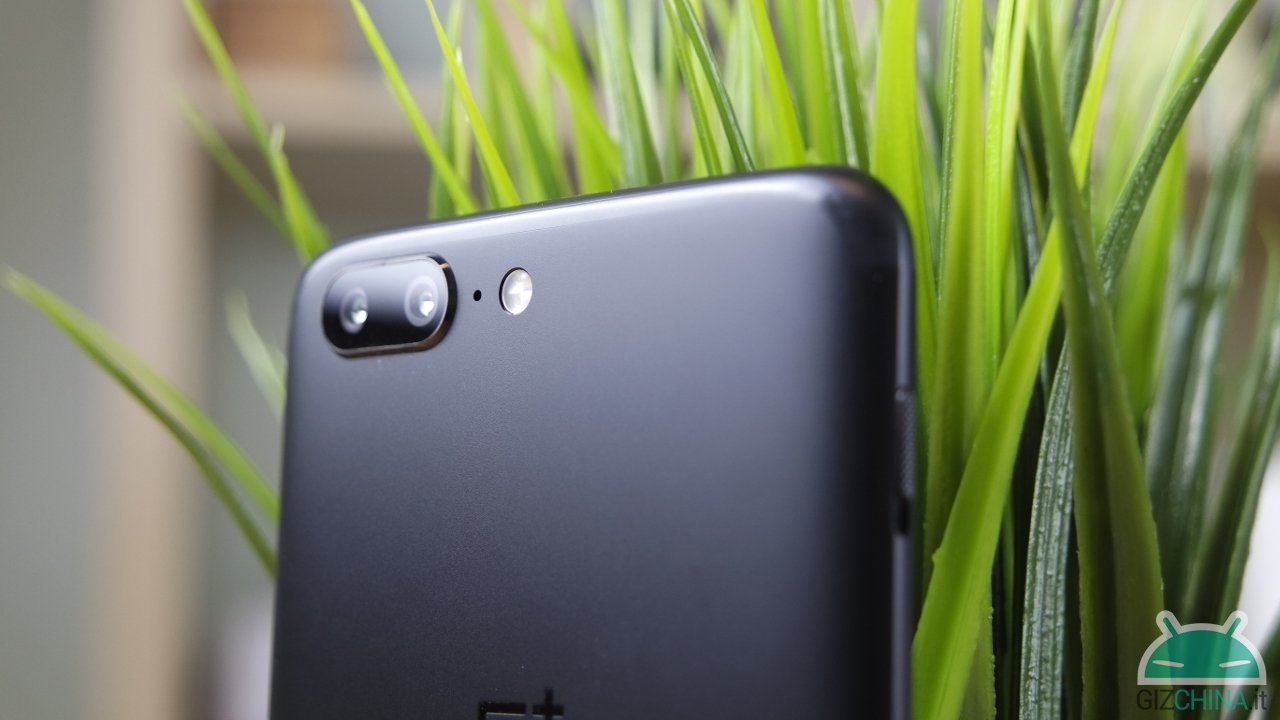 We conclude with an aspect we can say positive of OnePlus 5Or l 'autonomy. The phone benefits from standby power and Wi-Fi content, while stressing it under 4G results in average with other competitors, given the roomy but not too much battery 3300 mAh integrated in just 7.25 mm. Within a day you can reach 4-5 hours of active display with medium / intense use. And here comes charging Dash Charge, not renewed but still up to rival, reloading the phone in about 70 minutes.

As you will have understood from the review, say that OnePlus 5 both an ugly product would be heresy. The phone can satisfy the user in almost all the sectors, resulting reliable and ready to use in all conditions. So where does all the hustle and bustle generated at the launch come from? As I see it, in the 2017 it is quite easy to make a device that works well. We have reached a point where technology has reached such a level in telephony that even mid-range smartphones are up to average daily use. And as always happens in these cases, boredom is around the corner.

Users want increasingly fresh and original ideas, able to appear more revolutionary than the previous model. If you follow the tech world, surely you have felt this sensation reading threads, posts and so on. But beyond these more purely subjective and vaguely pseudo-philosophical discourses (in which I still find myself), if you buy OnePlus 5 you will hardly be disappointed.