despite the lots of news (also conflicting) negative related to mobile division of LeEco, Of which we talked many times and with the latest news summarized in this article, today one arrives news that will be very pleased to the owners of the company's smartphones: theEUI 6.0 user interface based on Android 7.1 Nougat it would indeed be next, at least for some models.

LeEco: the EUI 6.0 based on Android 7.1 Nougat should be close

The news was given by one reliable source, or from one engineer engaged precisely in the development of the ROM owner of LeEco, called Yuan Liu Yang. On his Weibo profile, in fact, he showed the photos of some packages containing the next update of the ROM per LeEco Le 2 (both MediaTek - x620 - and Snapdragon - x520 - that the American variant The S3), Le Max 2 e Le Pro 3. 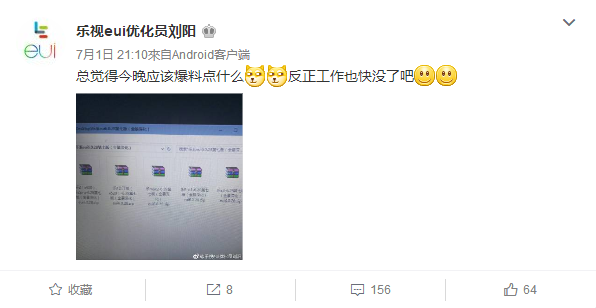 This would mean that, net of the many voices that fear even the complete abandonment of the mobile sector for LeEco, at least will be given the opportunity to buyers of the latest smartphone of the brand to receive a much coveted update all 'latest version of Android and that, being practically ready, even if it did not see the light officially could still be released in an less official way. Of course, the photograph could have been taken knowingly not to reveal any plan but the fact that there were only shown company phones already on sale could make you think that there is no Le Max 3 in the pipeline, despite the many hypotheses that have followed in quite recent times.

There remains, therefore, that wait for the official release of these ROMs or at least that they are spread in the form of leak. Furthermore, it is unclear whether the road will be pursued also include other languages which had distinguished some of the latest updates from the company, or whether they will be released ROM also for non-Chinese firmware, and then with i Google services already included. In any case, certainly the modder community you will not be unprepared.