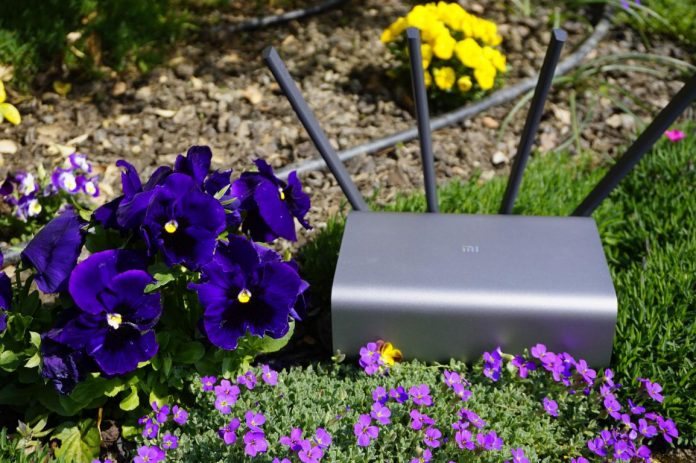 Not too long ago we tried it Xiaomi Mi Wireless Nas (R1D), first version of the famous routers Xiaomi now sold off at really attractive prices. In today's review, however, we're going to try the latest edition of the new router of the Chinese giant, or the Xiaomi Mi Router Pro, a real concentrate of cutting-edge technology which, however, is not without flaws.

Lo Xiaomi Mi Router Pro is available on GearBest at a price of 107 € with shipping from China. 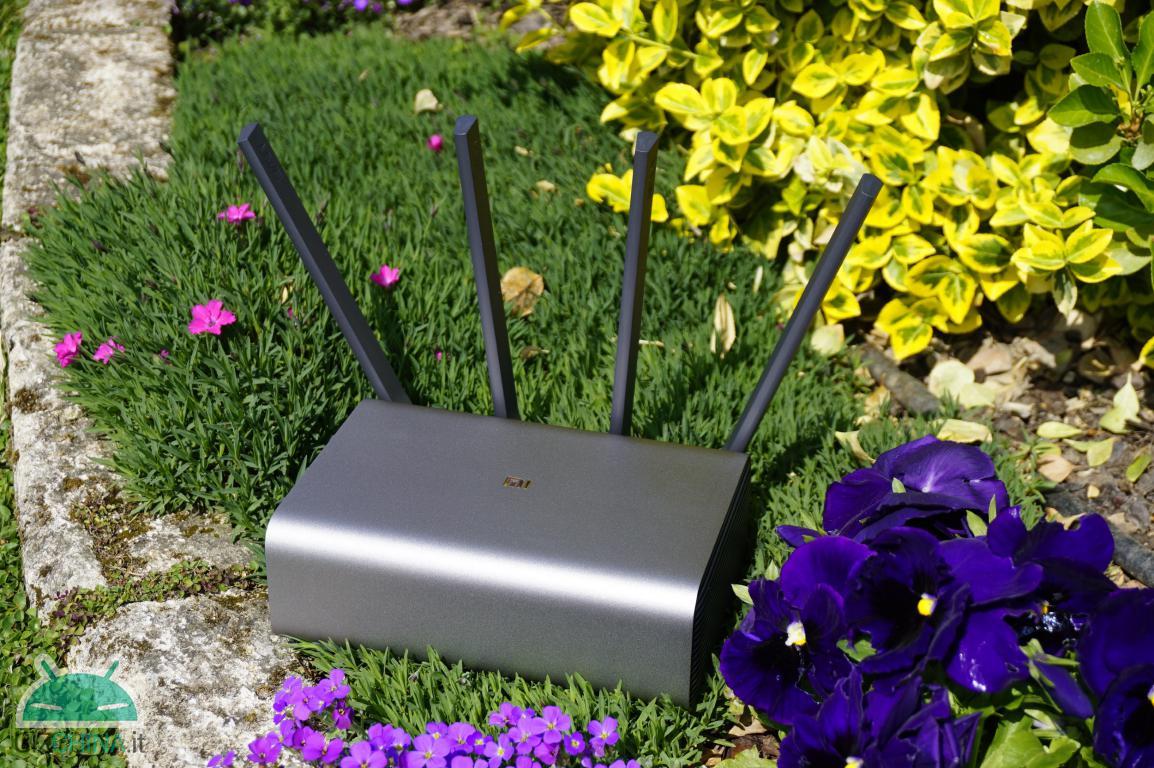 The sales package is made of black cardboard. On it we find only some of the features of the device.

Inside we find the device, a short one Chinese language manual and finally a second package with thedevice power supply with Chinese plug. Absent Ethernet cables or additional accessories.

There are as many as four omnidirectional high gain antennas, since we are talking about 6 dBi and that, with the appropriate devices able to support this technology, allow to exploit the MU-MIMO 4 x 4 technology, which allows to use the four receivers and four transmitters in parallel for the transmission of data to several users independently. There are also four doors Ethernet RJ45 LAN a 1000 Mbps of which one WAN port. The key is missing WPS even if it is fully supported. Also present 3.0 USB port. The dimensions are of 19,5 × 6,6 × 14.6 centimeters, for a weight of approx 1030 grams.

La network encryption instead it supports only the WPA-PSK and WPA2-PSK standard, no AES therefore. Also noteworthy that the 5GHz network is limited to a limited number of channels, therefore on some "western" and European devices it could not be detected, as for example it happened on mine Nubia N1. Among the supported channels, in fact, we find 149, 153, 157, 161 and 165 for China, followed by the European ones with DFS, namely 36, 40, 44, 48, 52, 56, 60 and 64. From experience I recommend to use the 44 or the 48, since they are the ones with which I found the greatest compatibility.

Obviously the relative is present application for smartphones, both on iOS and on Android, while from the PC the interface has been translated only into Chinese. The operating system is based on OpenWRT and offers compatibility with different plugins, which can only be installed by the application in Chinese.

Compared to the "old" Mi R1D Router, Xiaomi has completely revised the design, going to change shape, construction and adding the four full-bodied partially visible omnidirectional external antennas. The socca is now completely made of metal, which gives back an excellent feedback and a sense of solidity to the touch.

At the front we find only a small blue activity LED, while at the top we find the Xiaomi logo. 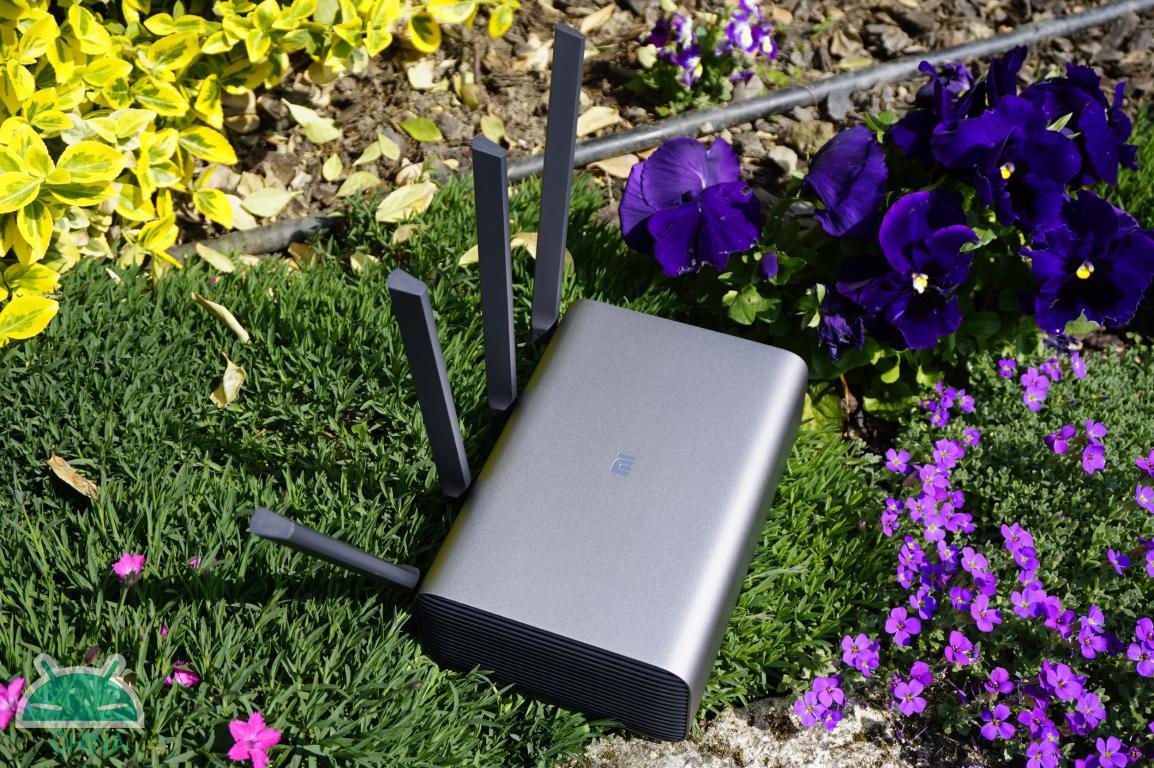 On the contrary, we find the whole part of communication, that is, the three GigaBit Ethernet ports, 3.0 USB port and WAN port (always Gigabit), in addition to the power connector and a small hole for the reset button.

Below then, we find four small rubber feet that give stability to the device. Finally, on the right and left sides we find the two slots for cooling the system, even if there are no fans or active dissipation systems.

The power supply is also simple and compact, able to supply up to 2A to 5 Volt but characterized by the classic Chinese plug.

Going to test the WiFi performance I discovered, a bit like already seen on the Mi Mini 3 Router, that the 5 GHz network is not detected by some "European" devices, in particular my two Meizu with international firmware have not been able to detect the 5 GHz network. Fortunately I did not have this problem with the PC, even though it should be noted that full channel compatibility with 5 GHz is not guaranteed with western products. A little trick to show the 5 GHz network even to western devices is to use channel 44, even if I still noticed some incompatibilities on some devices.

To test the WiFi, both at 2.4 and at 5 GHz, I carried out several tests of data transfer and measurement of the intensity of the signal with different distances and obstacles in the middle, here are the ones carried out:

In the first case, the power of the signal a 2.4 GHz turned out to be more than good, superior to my old man Netgear DGN2200 and also to the first Xiaomi Router. Equally good that measured on the 5 GHz network. Also excellent transfer rates, especially at 5 GHz, although perhaps they were limited by my WiFi receiver to 5 GHz, given the potential of the product in relation to the specifications stated, which is why I decided to exclude them momentarily waiting for a new WiFi receiver. 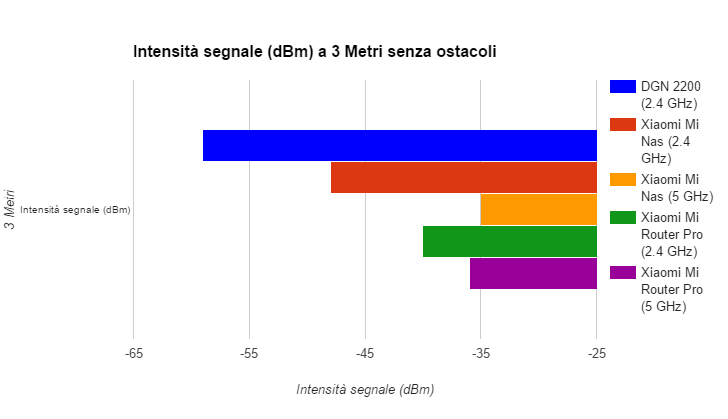 Also in the second test a 5 meters from Router, the values ​​found are very good, both at 5 GHz and 2.4 GHz. 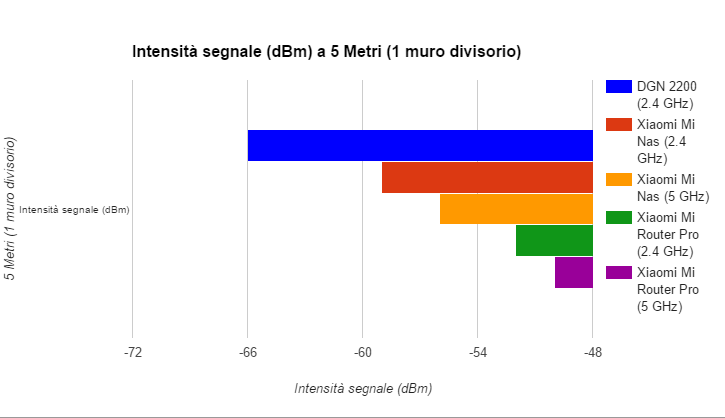 In the third test a 8 meters from Router downstairs with a reinforced concrete floor and a pair of partitions internal in the middle, performance drops on the 5 GHz network, mind remain quite stable on that to 2.4 GHz. 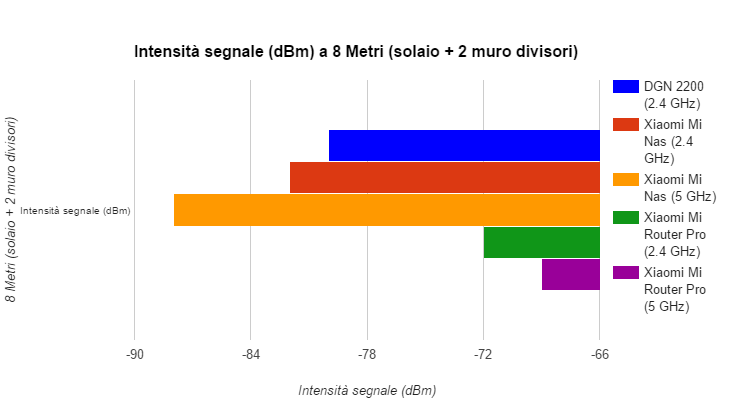 Moving on to the outside, a 10 meters away from Router with the two load-bearing walls and a wall internal partition as an obstacle, the transfer rate drops dramatically, as does the power of the signal, which still remains on a good level of power. 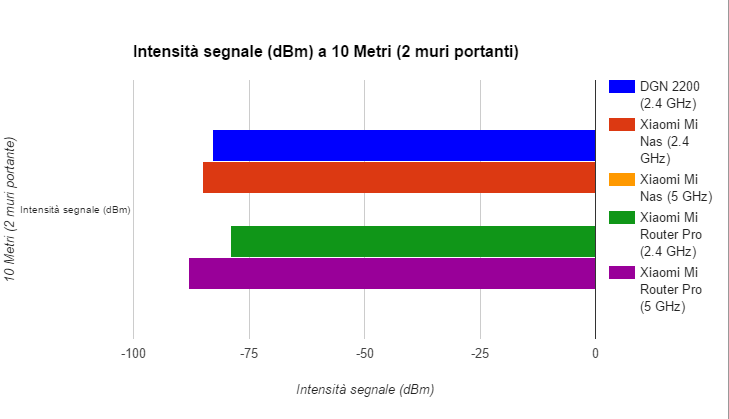 Finally, staying outside the house a 25 meters from Router with only one supporting wall as an obstacle in the middle, the limits of 5 GHz networks over long distances emerge, while the power of the recorded signal remains more than good. 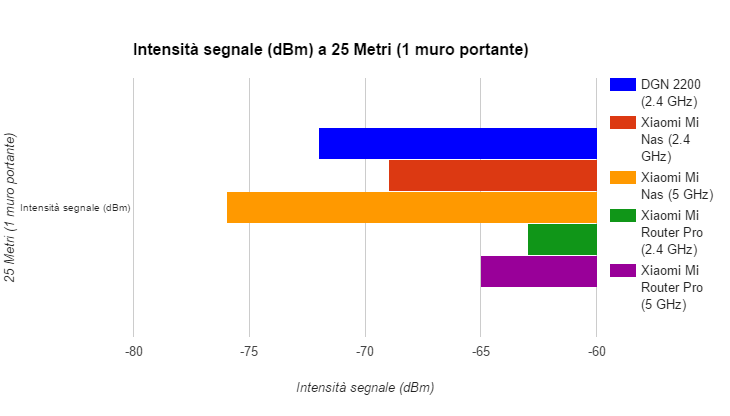 Good performance of the Gigabit Ethernet port , aligned with the manufacturer's statements.

On the consumption front it emerges that the device is really park. To be fair, I made two measurements: one with WiFi active and the other with an external USB drive active in full data transfer via WiFi.

In the first case I measured a value close to 5/6 Watt, while in the second test consumption remained included between the 10 and the 12 Watt, two ranges of values ​​that are more than acceptable.

On the thermal front, the device is completely fanless due to the absence of an internal disk, but despite this, the recorded temperature does not have never exceeded the 30 ° C, as well as the feeder, always fresh or at most lukewarm.

On the software front we find the same and identical mobile application and graphical interface already seen on the Xiaomi Mi Wireless NAS (R1D), which offers a lot of settings and additional features.

We can indeed install plugins (using the Chinese app though), set the automatic backup of the photos of our device on a connected USB device, use a real downloader and much more. Among other options, we also find here the possibility to limit the band to connected devicesor we can prohibit access to certain websites, adding exceptions or various rules to the firewall. Also interesting is the option to make the USB port work in 2.0 or 3.0 mode, so as to avoid interference with WiFi networks to 2.4 GHz.

Even here there is no option for Timing the WiFi network or reboot periods, followed by the option to create one Guest network with bandwidth or limited use time for each connected device.

Going to the Web interface, accessible from your browser by typing 192.168.31.1 and entering the login credentials, unfortunately I made a bad discovery, since I found the interface in Chinese and without any option to set it in English. The only possibility of translation is to use Google Translate, which once enabled automatically loads the translated page in a gross but understandable way.

For the rest, solved this small inconvenience, even in the UI via browser we find the same options accessible from the mobile application, enriched by some real-time control tools of the use of network resources, the CPU and many other parameters related todoor opening and LAN configurations.

There is also an option to choose whether use the device as a real router or as a simple repeater. Then there is the part relating to the bandwidth settable for each device, to the QoS and to the WiFi scheduling. Finally we can decide whether to disable the 5GHz network, besides being able to choose the name of the two networks and the signal strength of the antennas.

In conclusion it Xiaomi Mi Router Pro It is definitely a step forward compared to the old model, both for the design, completely revised and decidedly more pleasant and attractive, both for the performance, which, albeit minimal, have an edge in different contexts of use.

However, there are no shortcomings, first of all classic "incompatibility" of 5GHz networks with the European channels, which therefore could make the 5GHz network unusable on some of your devices. Secondly, also theWeb interface available only in Chinese leaves a little 'perplexing, since the previous models and the mobile application find the English language, much more understandable. It is probably only a matter of time for a new version of the firmware to be released in English.

For the rest there is poco to say, the price is perhaps not surprising as for the previous model since on this version we do not have any internal disk, however for poco more than 100 € you will have a decidedly advanced router,

Lo Xiaomi Mi Router Pro is available on GearBest at a price of 107 € with shipping from China.